Ovarian cancer is one of the most common malignancies of the female reproductive system, and due to its high degree of malignancy, the mortality rate is as high as 30% or more (1,2). Factors influencing death in patients with ovarian cancer include clinical staging, lymph node metastasis, and tumor biology (3,4). Identifying risk factors for postoperative recurrence, metastasis, or death in ovarian cancer patients is beneficial for improving treatment measures to prolong the survival and predict the prognosis of these patients. In recent years, the relationship between the neutrophil-to-lymphocyte ratio (NLR) and malignant tumors has gradually attracted increasing attention from scholars, and studies have confirmed that NLR can predict patient prognosis in breast, liver, lung, and bladder cancers, these studies showed that a higher level of NLR was associated with a poor prognosis (5-8). Studies have also shown that NLR is associated with the efficacy of neoadjuvant chemotherapy in patients with ovarian cancer, a higher level of NLR is associated with a poor efficacy of neoadjuvant chemotherapy (9,10), but whether this change in efficacy translates into a long-term mortality benefit is unclear. Therefore, we designed this study to explore the correlation between the NLR and clinicopathological parameters in patients with epithelial ovarian cancer and its effect on prognosis, so as to promote the application of NLR in patients with ovarian cancer. We present the following article in accordance with the REMARK reporting checklist (available at https://gs.amegroups.com/article/view/10.21037/gs-22-413/rc).

A total of 168 epithelial ovarian cancer patients admitted to the Pu Ren Hospital in Wuhan City and Shandong Qingdao Hospital of Integrated Traditional and Western Medicine from January 2015 to January 2017 were continuously included in this retrospective cohort study. All of the patients underwent surgical treatment. The patients were equally divided into high NLR (n=84, NLR >3.5) and low NLR (n=84, NLR ≤3.5) groups according to their preoperative NLR levels.

All procedures performed in this study were in accordance with the Declaration of Helsinki (as revised in 2013). This study was approved by the Ethics Committee of the Pu Ren Hospital in Wuhan City (No. 20210182) and Shandong Qingdao Hospital of Integrated Traditional and Western Medicine [No. (2002)001], and the requirement for individual informed consent for this retrospective analysis was waived.

Data analysis in this study was completed using SPSS26.0 (IBM, Chicago, USA), and the difference was considered statistically significant when P<0.05 (two-sided). The measurement data of the two groups were expressed as mean ± standard deviation, and the differences between the two groups were analyzed by independent sample t-tests. Receiver operating characteristic (ROC) curves were used to analyze the predictive value of the NLR in the prognosis of patients with ovarian cancer. Differences in PFS and mortality in the high and low NLR groups were analyzed using Kaplan-Meier (KM) survival curves.

Correlation between NLR and clinicopathological features in patients with ovarian cancer 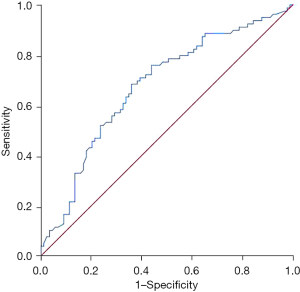 Figure 1 Predictive value of the NLR for recurrence or metastasis in patients with ovarian cancer within 5 years after surgery. NLR, neutrophil-to-lymphocyte ratio.

Figure 2 Predictive value of the NLR for death within 5 years after surgery in patients with ovarian cancer. NLR, neutrophil-to-lymphocyte ratio.

Comparison of PFS between the two groups

Compared with the low NLR group, the PFS of the patients in the high NLR group was significantly reduced (P=0.000). See Figure 3. 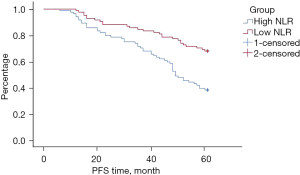 Comparison of 5-year mortality rates between the two groups

The 5-year mortality rate in the high NLR group was markedly higher than that of the low NLR group (P=0.000). See Figure 4. 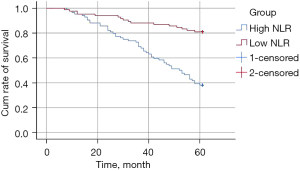 There is growing evidence that cancer cells can induce tumor angiogenesis by activating systemic inflammation, which ultimately promotes tumor cell proliferation and metastasis (11-13). The systemic inflammatory response is closely related to the onset, development, and metastasis of cancer. Thus, inflammatory markers, including the NLR, have been shown to be associated with cancer mortality and are utilized as useful prognostic indicators in many solid tumors (14,15). In our study, the relationship between the NLR and ovarian cancer patients’ clinical-pathological characteristics, postoperative PFS, and mortality rate was explored. We observed that high NLR was related to lymph node metastasis, ascites, and FIGO staging in ovarian cancer patients. Also, the postoperative PFS was shortened and the mortality rate was increased in ovarian cancer patients with high NLR.

Neutrophils are a kind of inflammatory cell. Following the activation of systemic inflammation by the tumor, the level of neutrophils increases, and the systemic inflammation leads to local angiogenesis of the tumor tissue, proliferation and growth of tumor cells, and eventually results in tumor cell metastasis. Lymphocytes are the core of the immune response and can be divided into three categories, namely T cells, B cells, and natural killer (NK) cells. T cells are thymus-dependent lymphocytes that are differentiated from bone marrow-derived lymphocytes in the thymus and can be divided into three subpopulations according to their function in the immune response: cytotoxic T cells, helper T cells, and regulatory T cells. The full name of B cells is bone marrow-dependent lymphocytes. These cells are derived from the bone marrow and can be increased to differentiate into effector B cells after being stimulated by antigens. B cells synthesize and secrete antibodies, and exert immune effects. NK cells are differentiated from lymphoid stem cells in the bone marrow and can directly kill virus-infected cells, tumor cells, and allogeneic cells. Thus, lymphocytes are the basis of the body’s ability to kill tumor cells (16-18).

An elevated NLR indicates that the body’s systemic inflammatory state is activated and lymphocytes are inhibited; in this case, the body’s ability to kill tumor cells is diminished, and the proliferation and metastasis of tumor cells increases, which can lead to a poor prognosis (19,20). Our study showed that a high NLR may promote the proliferation and metastasis of ovarian cancer cells, manifested by an increased FIGO staging, lymph node metastasis, and ascites, which ultimately lead to a poor prognosis. These findings have been confirmed by several previous studies (21,22). In addition, studies have also shown that a high NLR is associated with the sensitivity of chemotherapy drugs in patients with ovarian cancer, which is manifested by patients with a high NLR reacting less after receiving chemotherapy (9,10). This may also be a factor in the poor prognosis of patients with ovarian cancer caused by a high NLR.

There were some limitations in our study that should be noted. Firstly, this was a retrospectively clinical study. In addition, we failed to study the mechanism of NLR leading to ovarian cancer cell metastasis.

Reporting Checklist: The authors have completed the REMARK reporting checklist. Available at https://gs.amegroups.com/article/view/10.21037/gs-22-413/rc

Conflicts of Interest: All authors have completed the ICMJE uniform disclosure form (available at https://gs.amegroups.com/article/view/10.21037/gs-22-413/coif). The authors have no conflicts of interest to declare.

Ethical Statement: The authors are accountable for all aspects of the work in ensuring that questions related to the accuracy or integrity of any part of the work are appropriately investigated and resolved. All procedures performed in this study were in accordance with the Declaration of Helsinki (as revised in 2013). This study was approved by the Ethics Committee of the Pu Ren Hospital in Wuhan City (No. 20210182) and Shandong Qingdao Hospital of Integrated Traditional and Western Medicine [No. (2002)001], and the requirement for individual informed consent for this retrospective analysis was waived.