ADMs are marketed by several manufacturers in various sizes and thicknesses. Recently, there have been studies on the relationship between ADM size and the incidence of seroma, but there are not enough studies yet to draw a firm conclusion. There are no studies on the correlation between ADM thickness and the incidence of seroma in implant-based breast reconstruction. Therefore, this study aimed to determine whether the ADM surface area and thickness are associated with an increased risk of seroma. We hypothesized that a high drainage volume and a long drainage period would increase the incidence of seroma. This study aimed to investigate the drainage volume and drainage period according to the type of ADM used in implant-based breast reconstruction. We present the following article in accordance with the STROBE reporting checklist (available at https://gs.amegroups.com/article/view/10.21037/gs-22-175/rc).

The study was conducted in accordance with the Declaration of Helsinki (as revised in 2013). The study was approved by the Institutional Review Board of Yeungnam University Hospital (No. 2020-12-047-002), and individual consent for this retrospective analysis was waived. A retrospective chart review was conducted based on the medical records of patients who underwent submuscular direct-to-implant breast reconstruction from January 2011 to June 2018 by a single surgeon (JHL) at our institution. Only cases of dual-plane ADM reconstruction with unilateral or bilateral direct-to-implant were included. Exclusion criteria were as follows: patients who had undergone a prophylactic mastectomy, patients in whom a tissue expander has been used, patients who had undergone autologous reconstruction at the same time, a history of breast conservative surgery, a history of radiation therapy, a history of significant comorbidities that might affect wound healing, a follow-up period less than 6 months, incomplete data, and having undergone reoperation, which is classified as a major complication. The cases of reoperation were excluded as external factors since the open wound greatly influences the change in drainage volume.

Complications included infection, flap necrosis, seroma, and hematoma. Cases in which wound healing was delayed due to an antibiotic-controlled infection, focal flap necrosis, or dehiscence were classified as having minor complications. Infection was defined as any erythematous changes in the affected breast with general symptoms of infection, including a sensation of heat on the breast, a generalized febrile sensation, and fever. Any infectious complications encountered during the follow-up period were regarded as clinically significant. Flap necrosis was defined as skin necrosis only along the incision line without any erythematous changes in the breast. Seroma was defined as a fluid collection in the affected breast that required ultrasound-guided aspiration after removing both drains. The drains were removed when the drainage volume was less than 20 mL/day for two consecutive days.

The thickness is the average value provided by the manufacturer (e.g., 1–2 mm is calculated as 1.5-mm thickness). ADM, acellular dermal matrix.

A single surgeon (JHL) performed all the breast reconstructions using the same surgical protocol. After skin-sparing mastectomy, a subpectoral pocket was created by dividing the pectoralis major muscle from the chest wall to place the implant. The ADM was fixed along the inferior border of the pectoralis muscle superiorly, inframammary fold inferiorly, and serratus anterior fascia laterally to create a structurally robust and natural ADM sling. Two closed-suction drains were placed in the supramuscular plane (between the pectoralis major muscle and the skin) and the submuscular plane (between the implant and the pectoralis major muscle). ADM size was determined in consideration of implant size, subpectoral pocket size, the degree of ptosis, and chest wall size. ADM thickness was used randomly without indication. Fenestrated ADM was not used, and no additional procedure was performed to stick the ADM into the mastectomy flap.

Second-generation cephalosporin intravenous antibiotics were administered for 10 days prophylactically, and dressing changes were performed daily. To reduce dead space, the breast was compressed using an elastic band. The drains were removed based on the drainage volume recorded by the patient (less than 20 mL/day for two consecutive days). Patients with increased drainage volume were also removed with the same protocol. Instead, because the drain maintenance period was long, it was removed from the outpatient department after discharge. After discharge, the patient measured and recorded the drainage volume by herself at a certain time every day, and visited the hospital twice a week for drain site dressing.

The drainage volume and period were analyzed between the groups using analysis of variance (ANOVA) and Chi-square tests. The factors influencing drainage were analyzed using Pearson correlation coefficients. An analysis of covariance (ANCOVA) was used to correct the group distribution among the manufacturers. IBM SPSS version 21.0 for Windows (IBM Corp., Armonk, NY, USA) was used for statistical analyses, and a value of P<0.05 was considered significant.

Comparison of drain volume and period by groups

a,b, Scheffe’s multiple comparison. Means followed by the same letter in a column are not significantly different. SD, standard deviation. 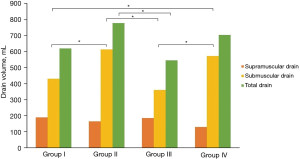 In analyzing the correlation of total drainage volume with age, BMI, mastectomy volume, and implant volume, a correlation was identified for all the variables (age: 0.137, BMI: 0.217, mastectomy volume: 0.358, implant volume: 0.385) (Figure 3). While similar characteristics were observed among the ADM manufacturers, there was a difference in the group distribution. ANCOVA results revealed no significant difference in the total drainage volume of ADMs among the manufacturers (P=0.136). 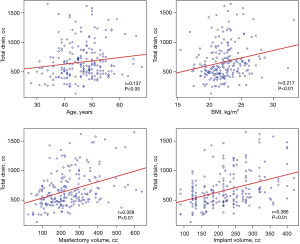 Several clinical studies have demonstrated that ADM use increased the seroma rate. Chun et al. reported a 4.24-fold difference in the incidence of seroma when using an ADM (10). Ho et al. analyzed four studies and reported a pooled odds ratio of 3.89 (11). Similarly, in 2017, Mangialardi et al. reported a pooled risk ratio of 2.73 for seromas after ADM use in a meta-analysis of six studies (8). In 2013, Cayci et al. studied the association between ADM size and complications (12). However, there are limited studies on the size of an ADM.

When the mastectomy volume is large, the damaged tissue size is large, with a high possibility of dead space between the ADM and the overlying breast tissue. Therefore, it is highly likely that the drainage volume will increase due to poor incorporation; in fact, a positive correlation was confirmed in our study. It can be interpreted that the implant volume required increases in proportion to the mastectomy volume. As patients with a high BMI tend to have pendulous breast skin, the drainage volume appears to increase for the same reason as the mastectomy volume. Further, Mendenhall et al. reported that obesity increases the drainage removal period by 21.5% (P=0.009) (14).

No consensus has been reached regarding the difference in the incidence of seroma according to the ADM type and processing. Butterfield et al. reported that replacing the aseptic human cadaveric ADM, AlloDerm, with a xenogeneic ADM, SurgiMend (TEI Biosciences, Inc., Waltham, MA, USA), decreased the incidence of seroma from 15.7% to 8.6% (P=0.044) (15). Brooke et al. compared AlloDerm, DermaMatrix, and FlexHD and reported seroma rates of 4.0%, 5.4%, and 14.8%, respectively (16). In this study, there was no difference in the drainage volume or complication rate between the manufacturers of the ADMs. This result was in line with that of our previous studies in which there was no difference in the complication rate between aseptic or sterile ADMs (17,18).

A single surgeon performed the surgery using the same surgical protocol. Nevertheless, ADMs of different sizes were used as the ADM size was adjusted according to the implant size, subpectoral pocket size, the degree of ptosis or chest wall size.

There are some limitations to this study. First, this study did not have a prospective design; thus, selection bias may have occurred. Second, there was a difference in the breast skin thickness of each patient, but this could not be distinguished by quantitative measurement. Third, the relatively small sample size limits the power of our study in detecting significant differences. Nevertheless, the strength of this study is that this is the first study regarding the clinical outcome of ADM thickness and surface area on submuscular direct-to-implant breast reconstruction.

In direct-to-implant breast reconstruction, using a larger ADM, not a thicker ADM increases the drainage volume, resulting in a greater risk of seroma or infection. ADM use is expected to increase in the future, and prospective studies should be conducted on more patients to ensure the safe and effective use of ADMs.

Funding: This work was supported by Yeungnam University, 2021.

Reporting Checklist: The authors have completed the STROBE reporting checklist. Available at https://gs.amegroups.com/article/view/10.21037/gs-22-175/rc

Conflicts of Interest: All authors have completed the ICMJE uniform disclosure form (available at https://gs.amegroups.com/article/view/10.21037/gs-22-175/coif). The authors have no conflicts of interest to declare.

Ethical Statement: The authors are accountable for all aspects of the work in ensuring that questions related to the accuracy or integrity of any part of the work are appropriately investigated and resolved. The study was conducted in accordance with the Declaration of Helsinki (as revised in 2013). The study was approved by the Institutional Review Board of Yeungnam University Hospital (No. 2020-12-047-002), and individual consent for this retrospective analysis was waived.