Matrix-producing carcinoma (MPC) is a rare tumor accounting for 0.1% of all breast cancers (1). MPC is usually triple-negative breast cancer [TNBC; estrogen receptor (ER)-negative, progesterone receptor (PgR)-negative, and human epidermal growth factor receptor 2 (HER2)-negative] (2). There have been few reports on preoperative chemotherapy for MPC. We report a case of MPC treated with preoperative chemotherapy. We present the following case in accordance with the CARE reporting checklist (available at https://gs.amegroups.com/article/view/10.21037/gs-22-179/rc).

A 47-year-old woman underwent ultrasonography due to feeling a mass in her right breast. Ultrasonography revealed a 3-cm mass in the right upper outer quadrant. A core needle biopsy revealed invasive ductal carcinoma. She was referred to our department for further evaluation and treatment. She had a history of endometriosis and manic-depressive illness.

Clinically, a 3.3-cm elastic, hard, smooth-surfaced mass was palpable in the right upper outer quadrant. There were no skin changes or axillary lymph node swelling. 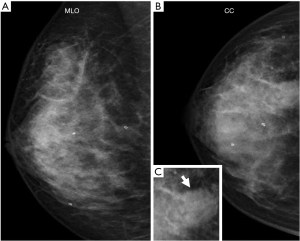 Figure 1 Pretreatment mammography. There is a mass in the right MLO medium area (A) and CC outer area (B). Enlargements of the areas are indicated by white arrows (C). MLO, medio-lateral oblique; CC, cranio-caudal.

Furthermore, this tumor was staged as cT2N0M0 based on the TNM classification. As a result of the multi-disciplinary team examination, although metaplastic carcinoma has a low sensitivity to chemotherapy, it had a nature of TNBC and neoadjuvant chemotherapy (NAC) would be useful for developing a postoperative treatment strategy. Furthermore, we could discontinue chemotherapy and go forward to surgery in case of tumor progression during NAC administration. We decided to administer NAC with the consent of the patient. EC (epirubicin 90 mg/m2, cyclophosphamide 600 mg/m2) was administered every 3 weeks for a total of 4 courses, followed by 12 courses of weekly paclitaxel (80 mg/m2). After preoperative chemotherapy was completed, the contrast effect in the upper outer quadrant of the right breast mass disappeared on MRI (Figure 5A). The tumor in the lower inner quadrant of the ipsilateral breast exhibited only a 20% reduction at the end of chemotherapy (Figure 5B).

Figure 5 Post-treatment magnetic resonance image. The contrast effect in the right upper-outer quadrant mass disappeared (A). The tumor in the lower inner area of the right breast is the same as before treatment (B).

Right skin-sparing mastectomy, sentinel lymph node biopsy, and deep inferior epigastric perforator flap reconstruction were performed under general anesthesia. There was no metastasis to the sentinel lymph nodes. Pathological examination revealed that the cartilage matrix component of the MPC part was hyalinized, and only 0.1 cm of invasive cancer remained at the tumor margin. Regarding invasive ductal carcinoma, the residual tumor diameter of the infiltrated part was 0.7 cm. In both cases, the results of immunostaining for ER, PgR and HER2 in surgical specimen were the same as those of the needle biopsy specimen harvested before NAC. Since a slight residual cancer was found, we considered to administer a postoperative chemotherapy; capecitabine. However, it was not administered due to the patient’s preference. Endocrine therapy with oral tamoxifen was initiated for the invasive ductal carcinoma. Radiation therapy was not performed because there was no metastasis to the lymph nodes. Three years after surgery, no recurrence was observed. All procedures performed in this study were in accordance with the ethical standards of the institutional and/or national research committee(s) and with the Helsinki Declaration (as revised in 2013). Written informed consent was obtained from the patient for publication of this case report and accompanying images. A copy of the written consent is available for review by the editorial office of this journal.

Metaplastic carcinoma is a rare and unique histologic subtype of breast cancer. MPC is categorized as a subtype of metaplastic carcinoma based on the 4th edition of the World Health Organization classification (3). According to the 2016 Annual Breast Cancer Registry by the Japanese Breast Cancer Society, 69 (0.3%) of 25,870 patients with breast cancers were diagnosed with MPC, a rare tumor (4). MPC is an invasive breast carcinoma with a direct transition of carcinoma to the cartilaginous or osseous matrix without an intervening spindle cell component (1). The cartilaginous or osseous matrix components at the tumor center and epithelial carcinoma components at the tumor margin manifest on contrast CT and MRI as ring enhancement, which are important diagnostic findings of MPC (5).

On immunohistochemistry, MPC is usually negative for ER, PgR, and HER2 (2). In addition to the epithelial markers such as keratin and EMA in the carcinoma component, SOX6 (a mesenchymal marker indicating cartilage differentiation), p63 (a myoepithelial cell marker), and S-100 protein (which is positive in chondrocyte-derived tumors) have also been expressed in MPCs (6-8). In our case, both histological and imaging findings were consistent with these typical MPC findings.

Due to the rarity and heterogeneity of MPC, its treatment has not been standardized. Several previous studies have based their treatment plan on the typical TNBC.

pCR rate of patients who received preoperative chemotherapy for MPC

Based on previous report, MPC has a worse prognosis than typical breast cancer due to its resistance to chemotherapy, with a 5-year survival rate of approximately 60–86% (19). Recurrences were noted early, within 3 years after surgery (19). In our case, preoperative chemotherapy for MPC was administered to evaluate the patient’s response to chemotherapy and provide optimal treatment. RCB classes of the MPC part corresponded to RCB-I (20), and the patient had a good prognosis. In conclusion, we reported a case of MPC that was successfully treated with preoperative chemotherapy. Since it is rare, a standardized treatment method for MPC has not been established. To investigate the effectiveness of NAC in MPC, analysis of large case series such as national registry data is useful and development of a new targeted therapy to MPC is warranted.

Reporting Checklist: The authors have completed the CARE reporting checklist. Available at https://gs.amegroups.com/article/view/10.21037/gs-22-179/rc

Conflicts of Interest: All authors have completed the ICMJE uniform disclosure form (available at https://gs.amegroups.com/article/view/10.21037/gs-22-179/coif). AY serves as an unpaid editorial board member of Gland Surgery from April 2019 to March 2023. The other authors have no conflicts of interest to declare.

Ethical Statement: The authors are accountable for all aspects of the work in ensuring that questions related to the accuracy or integrity of any part of the work are appropriately investigated and resolved. All procedures performed in this study were in accordance with the ethical standards of the institutional and/or national research committee(s) and with the Helsinki Declaration (as revised in 2013). Written informed consent was obtained from the patient for publication of this case report and accompanying images. A copy of the written consent is available for review by the editorial office of this journal.