Pleomorphic or fine linear microcalcification has a high probability of malignancy, and clustered microcalcification may be an early sign of breast cancer (1,2). Such lesions are usually classified as more than category 4 using the Breast Imaging Reporting and Data System (BI-RADS) classification, which requires histologic confirmation (3). However, even for lesions classified as BI-RADS category 3, additional follow-up is usually recommended with imaging or biopsy (4).

Mammography is a very sensitive imaging modality for detection of microcalcification. However, microcalcification cannot be identified with ultrasound (US) because the inner region of the lesion contains echogenic glandular tissue, which is not readily discerned with US (5). Therefore, excisional biopsy with the mammography-guided needle localization or the use of stereotactic equipment is necessary for histologic confirmation. However, stereotactic equipment is expensive, and a radiologist with specific experience and skills is necessary to conduct the procedure. Furthermore, patients would be exposed to radiation more than once when undergoing this procedure.

Vacuum-assisted breast biopsy (VABB) was first introduced for biopsy of benign breast nodules in 1996 (6,7). The VABB subsequently developed as a new treatment tool for benign breast lesions. The main advantages of VABB are that it allows the operator to not only obtain a sufficient amount of specimen, but also to completely remove small, benign lesions (8). The indications for VABB include palpable or non-palpable breast lesions diagnosed as BI-RADS category 3 or 4a.

From January to December 2013, a total of 22 consecutive patients underwent our non-stereotactic combination method involving US-guided wire localization and VABB. The patients had clustered, diffuse, or scattered microcalcification on mammography, and all were categorized as BI-RADS 3 or 4a. The exclusion criteria were ipsilateral breast cancer and previous surgery. Breast lesions categorized as BI-RADS category 4b or higher were excluded from this study because of their higher potential for malignancy. Informed consent was obtained from all patients and the protocol used in this study was approved by the Institutional Review Board Committee of the Pusan National University Hospital. 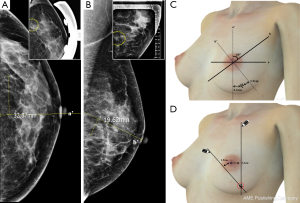 The US probe was placed on the marked location, and the US echogenicity was lowered to clearly visualize the microcalcification. A hook-shaped wire (Kopans spring-hook localization needle; Cook Inc., Bloomington, IN, USA) was then inserted into the glandular tissue. If the sonographer could not detect the microcalcification by US, the wire was inserted into the other structure, and the distance between the true lesion and needle tip was measured on the control mammograph (Figure 2). 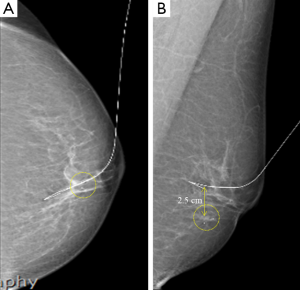 Figure 2 Hook-shaped wire insertion in left breast, which has clustered microcalcifications. (A) The wire is transpierced correctly on a cranio-caudal (CC) mammograph; (B) however, the locations of the wire and the microcalcifications are discordant by 2.5 cm. This error range should be considered when performing vacuum-assisted breast biopsy (VABB).

The patient was placed in the supine position, and aseptic povidone-iodine dressing was applied to the ipsilateral breast. Local anesthesia was injected into the skin and subcutaneous tissues (2 mL of 1% lidocaine solution), and further local anesthesia was administered into the target lesion (20 mL of 1% lidocaine solution). A 5-mm skin incision was made for insertion of the VABB probe (Mammotome®; Breast Care Business of Johnson & Johnson, Devicor Medical Products, cincinnati, OH, USA).

Once the location of the microcalcification was confirmed, the VABB probe was positioned underneath and parallel to the needle. If a distinction was present between the needle tip and the true lesion, the probe was moved to a more accurate position. Before performing the actual procedure, one or two samples were obtained to create a small hematoma or defect. This lesion was thus used to guide the VABB procedure. The H-wire was then gently pulled out from the breast parenchyma. Proper tissue sampling was performed about 10 to 20 times. The sampled tissues were arranged consecutively on an aseptic vinyl glove (Figure 3).

Figure 3 Combination technique involving ultrasound (US)-guided wire localization and vacuum-assisted breast biopsy (VABB). (A) The location of the clustered microcalcifications is identified; (B) the wire is localized at the clustered microcalcifications, and the VABB probe is inserted beneath the lesion. After the wire is removed, the procedure is performed; (C) after the procedure, the breast defect is managed according to the VABB protocol.

Postprocedural complications were assessed, and further management was determined according to the pathologic results.

In one case, the procedure was repeated 3 times. The mean ± standard deviation number of removed cores and calcified cores was 28.4±13.4 and 2.2±0.9, respectively. The major histologic type was fibrocystic change in 14 patients (63.6%), fibroadenoma in 4 (18.2%), sclerosing adenosis in 1 (4.5%), usual ductal hyperplasia in 2 (9.1%), and atypical ductal hyperplasia in 1 (4.5%). Three patients developed postprocedural complications. A significant hematoma remained 2 weeks after the procedure in two patients, and one patient developed mild inflammation at the incision site. All complications resolved with conservative treatment (Table 1). 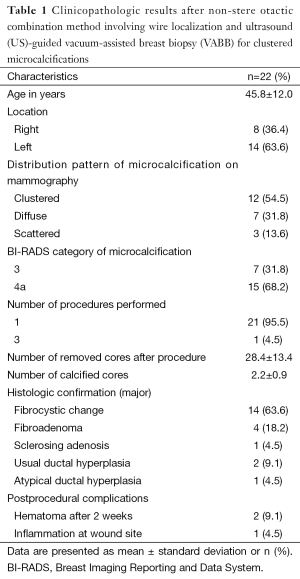 Wire-guided localization is the most commonly used intervention for non-palpable breast lesions (17,18). This technique uses a hook-shaped or J-shaped wire to localize the non-palpable breast lesion for excisional biopsy or lumpectomy. Although wire-guided localization is usually performed under US guidance, “microcalcification only on mammography” lesions can only be targeted under mammogram guidance. There are several disadvantages of mammography-guided wire localization. First, the dose of radiation exposure is higher than that associated with the US-guided method. Second, wire localization and excision of non-palpable breast lesions are usually performed by different physicians, such as a radiologist and surgeon, respectively. The radiologist and surgeon should discuss the localization status before the procedure to obtain good results. Third, movement among several rooms may be tiresome to the patient. Thus, US-guided wire localization should be performed if possible because it is easier and more effective for both the patient and physician.

Conventional wire localization was developed for open surgery of non-palpable breast lesions. However, this method can be combined with less invasive procedures, such as needle biopsy or VABB. When wire localization is performed with VABB, “microcalcification-only” lesions can be evaluated without a large incision or the parenchymal distortion that occurs after open surgery. Additionally, many advantages of VABB can be applied with the combination of wire localization and VABB (9,19-21).

There are several limitations in this technique. According to our previous study, more than 60% of category 4b lesions showed malignancy after biopsy (9). Thus, the combination technique described herein should be applied only to category 3 or 4a breast lesions. In addition, the breast physician should have a good understanding of mammographic findings and a high level of skill in both wire localization and VABB. And of course, it cannot be superior to conventional stereotactic biopsy for microcalcification. However, our technique would be helpful in some circumstances when the stereotactic method is impossible or failed.