Diffuse dermal angiomatosis of the breast: a series of 22 cases from a single institution

Diffuse dermal angiomatosis (DDA) is a rare cutaneous vascular disorder initially described as a variant of reactive angioendotheliomatosis (1). Breast involvement by DDA has been previously reported, although descriptions have been limited to case reports (2-5) and two small case series (6,7), for a total of nine published cases in the literature. The clinical presentation consists of non-healing, painful, poorly circumscribed plaques or ulcerations on the breasts with prominent vessels surrounding the lesions (Figure 1) (5,7). Predisposing factors typically include middle aged, actively smoking women with breast hypertrophy and circulating blood anticardiolipin antibodies, without evidence of a connective tissue disorder (4). Histological characteristics of the disease include extravascular endothelial cell proliferation in the dermal stroma, which is confirmed by positive immunohistochemical staining with the endothelial marker CD31 (5). It is hypothesized that this cell proliferation occurs secondary to the vascular deposition of immunoglobulin or cryoprotein (4). A characteristic dense and diffuse network of capillary vessels throughout the dermis can be seen on indocyanine green angiography (Figure 2). 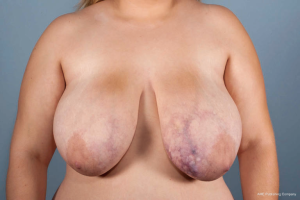 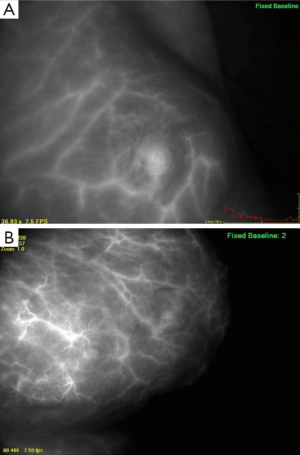 Figure 2 Fluorescent angiography of (A) normal breast and (B) characteristic dense diffuse network of regular capillary vessels through the dermis seen in patient with DDA of the breast. DDA, diffuse dermal angiomatosis.

With the paucity of cases of DDA of the breast reported in the literature, there is no current consensus on the best therapeutic approach. Current recommendations are variable and suggest that the use of isotretinoin, antithrombotic agents, acetylsalicylic acid, pentoxifylline, oral steroids or surgical reduction as means to treat or reduce disease severity (2-7). Isotretinoin therapy has been described as effective means in controlling DDA of the breast in two case reports (3,5). Further proposed therapies include smoking cessation, control of cardiovascular disease, and lifestyle changes; however, these have shown to be of limited benefit (Table 1) (2-8). There exists a single case report of successful surgical management of the disease with bilateral breast reduction (Table 1) (2). 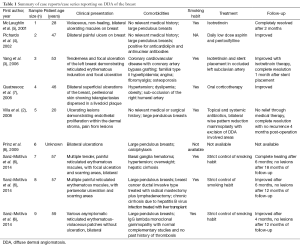 The objective of this study was to retrospectively evaluate patient outcomes following therapy in women diagnosed with DDA of the breast. We report on 22 cases of this rare disease, in which two patients underwent surgical management following failed medical therapy.

A formal literature review was conducted using the Medline and EMBASE databases, which were searched from their inception to June 2013 to identify studies reporting on DDA of the breast. A total of six studies were identified and reviewed to gain an understanding on patient presentations, characteristics, comorbidities, and disease therapy.

After IRB approval was obtained, an institutional database was queried using the key term “diffuse dermal angiomatosis” to identify all patient records with mention of DDA between 2004 and 2012 at Mayo Clinic. All identified electronic medical records were retrospectively reviewed to evaluate if they met inclusion or exclusion criteria. Inclusion criteria in this case series consisted of women presenting with a diffuse dermal angiogenic skin disorder of the breast with painful, poorly circumscribed, erythematous plaques with possible central ulceration. Diagnostic confirmation with skin biopsy was not necessary for inclusion in this study. Patients were excluded if the diagnosis of DDA was ruled out, or if the disease involved a body part other than the breast. Electronic medical records were analyzed to ensure each patient fit the clinical presentation for DDA of the breast described in the literature and all inclusion criteria. Included patients were further studied for demographic characteristics, disease characteristics, comorbidities, biopsy information, disease treatment and outcome (Table 2). 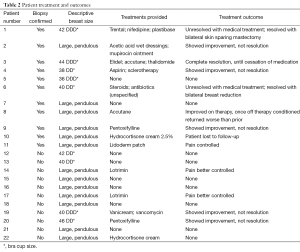 Thirty females and one male were identified using the key term “diffuse dermal angiomatosis” between 2004 and 2012, of which 22 met inclusion criteria. The diagnosis of DDA of the breast was confirmed with skin biopsy in 54.5% of patients (n=12), while a clinical diagnosis of DDA was made in the remaining patients without a confirmatory skin biopsy. Age at diagnosis ranged from 20 to 62 years with a mean age of 48.4 years. Patients with a biopsy-confirmed diagnostic were aged between 20 and 58 years with a mean age of 47.2 years. 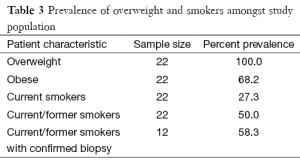 Isotretinoin was administered to 9.1% of patients (n=2), however, none had full recovery and both patients showed recurrence of DDA when taken off of therapy. Women placed on other medical therapies, including oral or topically based steroids, acetylsalicylic acid and pentoxifylline showed less to no improvement. Fifty percent of patients (11/22) given a diagnosis of DDA had no documentation of treatment in their medical record, including three women with biopsy-proven DDA.

Two patients underwent surgical intervention. One of these patients had a successful outcome following breast reduction; however she experienced delayed wound healing. The second surgical patient presented with recurrence of macromastia and DDA following breast reduction 30 years ago, and was successfully managed with bilateral mastectomies. Both patients were undergoing breast reduction surgery with a primary goal being size reduction, and hopeful improvement of musculoskeletal back strain secondary to having large breasts. Each patient had been diagnosed with DDA after having gained a large amount of weight and subsequently an increase in breast size. Diagnosis of DDA was within 3 years of weight gain in both patients and lead to additional burden of their disease. In deciding to undergo a breast reduction both patients were counseled on the outcomes of breast surgery, and the idea of using intraoperative fluorescein angiography to better visualize their breast lesions was discussed. Patients agreed that their main focus was to achieve a smaller breast size, additionally if an attempt could be made toward removing or curing their DDA lesion the patients wanted this effort to be made.

DDA was recognized as a distinct variant among cutaneous reactive angioendotheliomatosis in 1994 (6,9), with the first reported case involving the breast published in 2001 (5). To date, only been nine cases of DDA isolated to the breast have been reported in the literature with the largest series consisting of three patients. Our series of 22 women with this disorder is the largest series to date and further confirms DDA of the breast as a distinct entity among cutaneous reactive angioendotheliomatosis.

Many predisposing risk factors have been previously associated with DDA of the breast, such as middle adulthood (age between 40 and 65 years) (3,4,6,7), active smoking (2,3,5,7), elevated BMI (6,7), macromastia (2-8), coronary artery disease (3), hypertension (3,6,7), calciphylaxis (8), and antiphospholipid syndrome (4). At this time no animal studies have been conducted to elucidate a cause of DDA. The current hypothesis is that prolonged ischemia of tissue leads to upregulating of endothelial growth factors, and proliferation of new blood vessels (2-8). Thus, DDA has been described on the distal extremities of patients with bad coronary artery disease, as well as in patients with macromastia (2-8). Secondary health complications of macromastia/gigantomastia can include diminished blood circulation, sleep apnea (from the weight of the breasts, secondarily causing decreased oxygenation/ischemia to tissue), and skin chaffing which may all play a role in the underlying pathophysiology of DDA (10).

Our results confirm that middle-aged obese women suffering from breast hypertrophy may be at risk for the development of DDA. We were unable, however, to confirm other previously reported risk factors, namely coronary artery disease, hypertension, calciphylaxis or antiphospholipid syndrome. While level IV and V evidence from previously published small case series and case reports suggested a correlation between smoking and DDA (at least seven of the previously reported nine cases were active smokers or 78% of diagnosed patients), the data in this case series showed that a minority of women (27.3%) were active smokers. This is only slightly above the national average of 19.0% reported by the Center for Disease Control and Prevention in 2011 (11) and far from the previously published 78% rate (7/9) (Table 1).

A common complication with DDA of the breast is ulceration of the newly developed superficial vessels through the skin. Patients often complain of pain at sites of ulceration, leakage of fluid from the area of ulceration causing discoloration to their bras and/or clothing, and concerns with the appearance of their breast. Treatment has been aimed at reducing the size of lesions and preventing ulceration from occurring, thus providing the patients pain relief and improvement of their aesthetic appearance. Current treatment recommendations for DDA of the breast primarily focus on smoking cessation and control of cardiovascular risk factors such as hypertension and hyperlipidemia, if present (6). Adjunct medical therapy with agents such as isotretinoin, acetylsalicylic acid and pentoxifylline, and oral steroids has been reported, though with equivocal success (2,5). Successful surgical treatment with bilateral breast reduction has been reported in only one patient (2). Both patients in our series successfully treated surgically had failed prior medical treatment with isotretinoin. These findings suggest that DDA is a condition that may be due to subclinical torsion due to macromastia, with an inflammatory response exacerbated by obesity (and potential insulin resistance) and smoking, similar to the vascular compromise that is observed with oral contraceptives and smoking. In this case series, upon discontinuation of isotretinoin due to associated side effects, DDA symptoms reoccurrence was observed. Other patients in this series received medical therapy with steroid creams, oral antibiotics, over-the-counter moisturizers, and wet dressings with acetic acid. These treatments proved to be at best a temporary solution and were both found to be cumbersome and difficult for patients to maintain.

In this case series, surgical management of DDA with reduction mammoplasty or mastectomy was the only effective modality that resulted in resolution of DDA of the breast without recurrence after an average follow-up of 20 months. We conclude that surgical management of DDA of the breast with breast reduction should be discussed with patients who fail medical therapy, while mastectomy should be viewed as the last alternative in the treatment algorithm after the more conservative options have failed.

In a case series of 22 patients with DDA of the breast, macromastia and obesity were findings among all patients. Further analysis of this cohort suggests DDA of the breast may be linked to tobacco use. Half of this population consisted of current smokers with another fourth of patients admitting to smoking in the past. While many medical therapies have been utilized to lessen burden of disease, no one therapy has proven effective in managing this condition. Women included in this cohort were stratified across all currently proposed treatment arms. While improvement of disease was seen in many patients, none achieved complete remission sans continued therapy. Surgical management of DDA of the breast has offered patients a successful outcome and appears to provide definitive treatment, although the data is scarce. Further research is warranted to identify the best treatment modality to manage this distressing condition.

Conflicts of Interest: V Lemaine: Unrestricted research grant from Allergan. The other authors have no conflicts of interest to declare.