Noncoding RNAs are vital regulators of cancer biology, among which circRNAs are a newly verified type of intracellular noncoding RNA (7). Having no 3’-tail or 5’-head structure, which are very abundant in many human cells, circ RNAs (8) have hundreds of thousands bases and are able to modulate the function or change the expression of many important genes by different mechanisms. These include binding with proteins, blocking microRNAs (miRNAs), and even encoding low molecular weight proteins (9). New technology in circRNA sequencing, including high-throughput microarray sequencing, has seen increasing numbers of circRNAs identified and proven as modulators of various disorders, including different kinds of cancers (10-14). Taking the most well-known circRNA as an example, CDR1AS/ciRS-7 facilitates the tumor proliferation, chemo-resistance, metastasis, and immune evasion of different cancers by blocking miRNA miR-7 (15-20). Circular RNA FBXW7 is one of the first genes discovered to encode proteins which can suppress cell proliferation and invasion by encoding a 21 kDa/185aa novel short peptide in glioma and breast cancer (21,22). Additionally, circular RNA RAD18 was discovered as a blocker of miR-208a in breast cancer (23). CircHIPK3 was proven to promote colorectal cancer progression by sponging miR-7 (24). However, the underlying specific mechanism of circRNAs in papillary thyroid cancer growth and invasion remains unknown.

We present the following article in accordance with the MDAR reporting checklist (available at https://dx.doi.org/10.21037/gs-21-481).

Fresh papillary thyroid cancer and adjacent thyroid tissues were collected from Sun Yat-sen University Cancer Center (SYSUCC). All procedures performed in this study involving human participants were in accordance with the Declaration of Helsinki (as revised in 2013). This study was approved by the Ethics Committee of the SYSUCC (GZR2017163). Informed consent was obtained from all involved patients.

Cell lines were obtained from the ATCC (TPC-1, NPA87, and KAT-5) and were cultured in the medium (Gibco) containing 10% FBS (Gibco) according to the supplier’s instructions.

After 5 ug RNA was treated with RNase R (2 U/μg) or mock for half an hour at 37 °C, the remaining circRNA and other RNAs were quantified by RT-qPCR analysis.

Papillary thyroid cancer cells were treated with 5 μg/mL actinomycin D for certain hour period. Cells were then collected and the circular form of circRAD18 and linear form of RAD18 mRNA were quantified.

Protein was extracted by RIPA lysis then loaded, separated, and transferred to PVDF membranes. The membrane was incubated with primary antibody anti-PDK1 (1:1,000, Cell Signaling, USA), and anti-GAPDH antibody (1:1,000, Affinity, USA) overnight at 4 °C.

An Amplex Red Glucose/Glucose Oxidase Assay Kit (Invitrogen, USA) was used to measure glucose consumption and lactate production. Based on the total cellular protein amounts, the data were normalized.

Totally, 3×104 cells were added to the superior chambers (FBS-free), and medium with 20% FBS was loaded to the inferior chambers. The migrated PT cells were counted, then fixed with methanol and stained with 2% crystal violet using a migration chamber (BD Biosciences).

Cells were placed in 96-well plates (5×103 cells) and the reporting plasmids (circRAD18-wt/mut or PDK1 3’-UTR-wt/mut) and inhibitors/mimics of certain miRNA were co-transfected using a Promega luciferase kit.

Before RIP assays, cells were instantaneously transfected with MS2bs-circRAD18, MS2bs-circRAD18-mt, and MS2bs-Rluc. Moreover, RIP was performed with an RNA-Binding Protein Immunoprecipitation Kit, and miR-516b enrichment was determined after the purification. Ananti-Ago2 antibody (Millipore) was also used, and the relative amount of PDK1 mRNA, circRAD18, and miR-516b was checked.

All statistical analysis was performed using SPSS 25.0 software. Groups were compared by using Student’s t-test. All data were reported as the mean ± standard deviation (SD), and P<0.05 was regarded as statistically significant.

Compared to Nthy-ori3-1, circRAD18 was upregulated in three papillary thyroid carcinoma cell lines (Figure 1A). We then tested circRAD18 in 30 paired tissues by RT-qPCR analysis, and the data indicated that it was upregulated in papillary thyroid cancer samples (Figure 1B). The circular characteristics and degradation of circRAD18 by RNase R resistant assays and actinomycin D digestion assays was then examined and showed circRAD18 was resisted to RNase R, while the linear form RAD18 mRNA was degraded after exposure to RNase R (Figure 1C). Consistently, the circular structure of circRAD18 was more stable than the linear structure RAD18 mRNA in both KAT-5 and TPC-1cell lines (Figure 1D,1E). 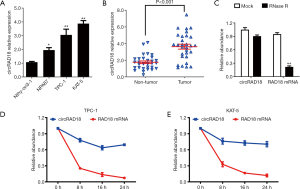 When examined by RT-qPCR analysis, the relative expression level of circRAD18 was decreased after being transfected with siRNA (Figure 2A). Colony-formation assays showed inhibition of circRAD18 suppressed the cell colony formatting ability of KAT-5 and TPC-1 cells (Figure 2B), while CCK-8 proliferation assays revealed downregulation of circRAD18 inhibited proliferation ability (Figure 2C,2D). Moreover, we found that while silence of circRAD18 could significantly suppress cell glucose uptake and lactate production in papillary thyroid cancer cells (Figure 2E,2F), it had no effect on normal cell lines. 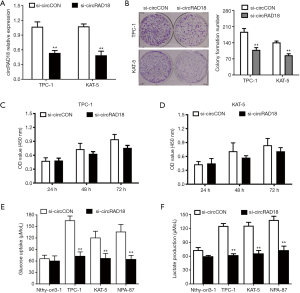 We next performed migration and invasion associated assays to further determine whether circRAD18 had a role in the metastasis of papillary thyroid cancer, and the results of transwell assays showed that silencing circRAD18 could attenuate the migration percentage of KAT-5 and TPC-1 cells (Figure 3A,3B). Moreover, inhibition of circRAD18 could suppress the migration ability of these cells in wound-healing experiments (Figure 3C,3D). 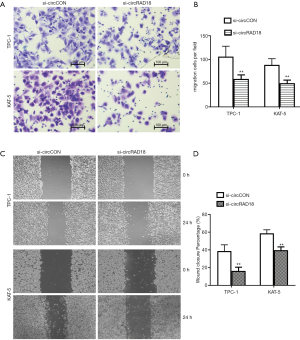 We determined the subcellular location of circRAD18 via qPCR analysis after isolating cytoplasmic and nuclear portions. The results showed circRAD18 predominantly existed in cytoplasm, which is where miRNA is mostly located, indicating interaction between the two (Figure 4A). Among the candidates, miR-516b was predicted to have the potential to bind circRAD18 sequence which contained three binding elements (Figure 4B). Moreover, we tested the relative expression of miR-516b by RT-qPCR analysis in cell lines and found miR-516b was downregulated (Figure 4C). Dual luciferase reporter assays also indicated that circRAD18 was able to interact with miR-516b (Figure 4D). To further validate this, we conducted MS2 related RNA immunoprecipitation (RIP) assays to confirm the direct interaction between circRAD18 and miR-516b, and the results revealed that miR-516b was extremely enriched in the MS2bs-circRAD18 group (Figure 4E). 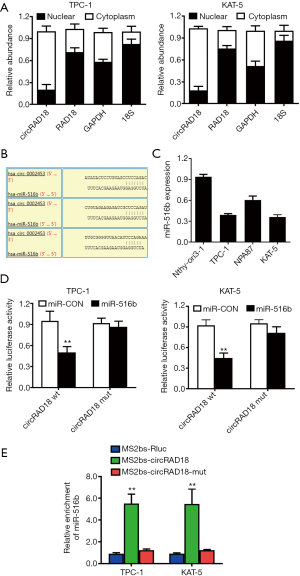 The TargetScan database was utilized to predict miR-516b targets and screen the downstream effects of miR-516b. Among the candidates (Figure 5A), PDK1, which is a metabolic protein in glucose intake (25) and is crucial for cancer progression (26,27), was identified as a target oncogene, and was overexpressed in papillary thyroid cancer cells (Figure 5B). Luciferase reporter experiments and RIP assays were also performed to verify whether miR-516b was able to directly bind the 3’-UTR of PDK1 mRNA. After transfecting miR-516b mimics, the luciferase amount was reduced (Figure 5C), and the expression level of PDK1 mRNA was decreased by miR-516b mimics, indicating that PDK1 is the target of miR-516b (Figure 5D). RISC complex of AGO2 protein related RIP assays were also conducted, and showed circRAD18, PDK1, and miR-516b were all gathered in the anti-AGO2 group (Figure 5E). Downregulation of circRAD18 resulted in significant upregulation of PDK1 gathering to RISC (Figure 5F), and transfection of miR-516b mimics could significantly suppress cell lactate production and glucose uptake (Figure 6A). Additionally, lactate production and glucose uptake returned to its previous level after overexpression of PDK1 (Figure 6B). Further, introduction of miR-516b mimics could decrease the protein expression of PDK1, which could be reversed by supplementation withPDK1 protein (Figure 6C,6D). 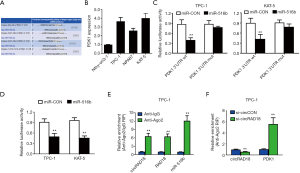 Figure 5 CircRAD18 regulates papillary thyroid cancer metabolism reprograming through the circRAD18-miR-516b-PDK1 axis. (A) Predicted interacting sequences of miR-516b within the 3’-UTR of PDK1 mRNA. (B) PDK1 expression in papillary thyroid cancer cell lines. (C) Luciferase reporter assay of TPC-1 and KAT-5 cells co-transfected with miR-516b mimics and the wild type/mutant 3’-UTR of PDK1 luciferase reporter. (D) Expression level of PDK1 was reduced after transfection with miR-516b mimics. (E) Gathering of circRAD18, PDK1, and miR-516b on AGO2. (F) Abundance of AGO2 to circRAD18 was reduced, while PDK1 was enhanced after knockdown of circRAD18. **, P<0.01. 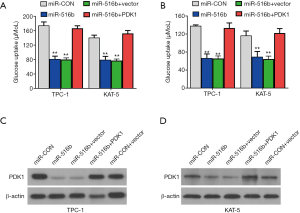 Figure 6 circRAD18-miR-516b regulates papillary thyroid cancer metabolism reprograming by the PDK1 pathway. (A) Glucose uptake rate was decreased after transfection with miR-516b mimics, which was reversed by supplement of PDK1. (B) Lactate production rate was reduced after overexpressing miR-516b mimics, which was reversed by PDK1 supplementation. (C,D) Introduction of miR-516b resulted in the decrease of PDK1 expression, detected by western blot analysis. **, P<0.01.

CircRNAs, which are composed of non-coding RNAs, are recently discovered and have quickly become a hot spot in biomedical biotechnology (28,29). Previous studies have shown that the expression of circRNAs differs in not only cell types, but also in tissue types, and the differential expression level of many circRNAs can serve as potential biomarkers to aid in the diagnosis and treatment of different cancers (30,31). Scientists have gradually come to realize that these novel RNAs with circular characteristics are not unimportant byproducts of splicing, but are vital modulators of a variety of cellular processes (32) and are involved in tumor development and progression. By translating the novel 370 amino acid CTNNB1 subtype, CTNNB1 pre-mRNA derived circRNAs promoted HCC cell proliferation by activating the Wnt signaling pathway (33). By sponging two miRNAs, miR-589 and miR-545, circular RNA PRKCI was upregulated in lung adenocarcinoma and promoted tumorigenesis (34), and in triple-negative breast cancer, circRNAs were discovered as tumor promotors by reducing apoptosis and promoting proliferation (35,36). Nevertheless, the role and function of circRNAs in papillary thyroid carcinoma has been rarely studied. In one report, CIRC_0006156 was upregulated in serum exosomes that promote the progression of papillary thyroid carcinoma via the miR-1178/TLR4 axis (37), and in another, CircRAPGF5 was seen to regulate the progression of papillary thyroid carcinoma (38). CIRC0088494 was also seen to be upregulated in papillary thyroid carcinoma and promoted carcinogenesis via the miR-876-CCND1 axis (39).

Previous research has shown that miR-516b was downregulated and an important tumor suppressor in primary melanoma (40), and in another study, highly upregulated circRNA, circCDC45 promoted glioma cell proliferation and metastasis by blocking miR-516b (41). Linc-01123 was also seen to regulate the Hedgehog pathway by the miR-516b-5p/Gli1 axis in osteosarcoma (42). In the recent decades, herbs and extractions from TCM, are gaining acceptance as promising complementary and alternative medicines for numerous diseases treatment (43-46). As a proven target of miR-516b, PDK1 regulates glucose and fatty acid metabolism and homeostasis (26,27). According to our findings, PDK1 was validated to be the downstream gene of miR-516b in papillary thyroid cancer, and circRAD18 could enhance the expression of PDK1.

Funding: This work was supported by the National Natural Science Foundation of China (No. 81772961).

Reporting Checklist: The authors have completed the MDAR reporting checklist. Available at https://dx.doi.org/10.21037/gs-21-481

Conflicts of Interest: All authors have completed the ICMJE uniform disclosure form (available at https://dx.doi.org/10.21037/gs-21-481). The authors have no conflicts of interest to declare.

Ethical Statement: The authors are accountable for all aspects of the work in ensuring that questions related to the accuracy or integrity of any part of the work are appropriately investigated and resolved. All procedures performed in this study involving human participants were in accordance with the Declaration of Helsinki (as revised in 2013). The Ethics Committee of SYSUCC approved the study (GZR2017163). Informed consent was obtained from all involved patients.