Breast cancer is one of the most common tumors in women worldwide, with an incidence rate of about 16% of all tumors, and its related mortality ranks first among female malignant tumors (1). In China, women who died from breast cancer alone in 2014 accounted for 7.82% of the total deaths from female-related cancers (2). In fact, the average age at Chinese women diagnosed with breast cancer is 45–55 years old, which is lower than the average of women in western countries, because of the application of assisted reproductive technology, birth patterns, lifestyle, environmental factors and so on (3,4). Epidermal growth factor receptor (EGFR) activation can induce phosphorylation of ERBB dimer partners, thereby affecting intracellular pathways such as RAS, RAF, MEK, ERK, PI3K, AKT, TOR, and Src kinase, and transcription factors such as STAT (5). At present, studies have proven that EGFR plays an important role in the occurrence and development of bladder cancer, prostate cancer, and other malignant tumors (6-8). Breast cancer is also involved in the same procedure (9). Zeste gene enhancer homolog 2 (EZH2) is a member of the polycomb group (PcG) family. A study demonstrated that EZH2 can affect the stability of ribosomal DNA, thereby promoting the growth and metastasis of breast cancer cells (10). The inhibition of the catalytic activity of EZH2 can target the metastatic subtype of triple negative breast cancer (TNBC) (11). Although EGFR and EZH2 have the similar effects, there are few studies which focus on the effect of EGFR and EZH2 co-expression on breast cancer. Additionally, whether EGFR and EZH2 have a common mechanism of action in the process of breast cancer is still unclear. This study analyzed the expression of EGFR and EZH2 at the protein and mRNA levels, along with their association with clinicopathological factors. The possible common signaling pathways were also investigated, as well as the mechanisms of invasion and metastasis of breast cancer. We present the following article in accordance with the REMARK reporting checklist (available at https://dx.doi.org/10.21037/gs-21-505).

The total protein was extracted using radioimmunoprecipitation (RIPA) protein lysate (Solarbio, Beijing, China). The protein concentration was determined by the BCA method. The protein samples were electrophoresed on a polyacrylamide gel and then transferred to a polyvinylidene fluoride (PVDF) membrane (Solarbio, Beijing, China). After blocking with 5% skim milk, the membrane was incubated with the primary antibody (Cell Signal Technology, Danvers, MA, USA) at 4 °C overnight. After washing with Tris buffered saline Tween (TBST), the membrane was incubated with the secondary antibody. The developer solution was added and allowed to soak for 2 minutes, then was placed in the analyzer (BIO-RAD, Hercules, CA, USA) for development.

An RNA extraction kit (TAKARA, Dalian, China) was used to extract total RNA from tissues, then an ultraviolet spectrophotometer (Thermo Fisher Scientific, Waltham, MA, USA) was used to measure the RNA concentration. Subsequently, cDNA was synthesized according to the instructions of the reverse transcription kit (TAKARA). The reaction conditions of qRT-PCR were pre-denaturation at 95 °C for 30 s, denaturation at 95 °C for 5 s, and annealing at 60 °C for 34 s, for a total of 40 cycles. The 2−ΔΔCt method was used to calculate the relative expression level.

The primer sequences used in this experiment were as follows:

Using the online database cBioPortal (12), two datasets (METABRIC, Nature 2012 & Nat Commun 2016, 2,509 samples; TCGA, PanCancer Atlas, 1,084 samples) were used to select the first 400 genes co-expressed with EGFR and EZH2. The Spearman correlation coefficient was set to 0.5020. Finally, 162 co-expressed genes of EGFR and 264 co-expressed genes of EZH2 were screened out. STRING (13) online tools were used to construct a protein-protein interaction (PPI) network, and Cytoscape (14) software was applied to screen out potential functional modules and to analyze the biological functions.

SPSS 25.0 software was used to perform the statistical analysis. The qRT-PCR mRNA expression data was expressed as . Two groups of data were compared using the t-test, and multiple groups of data were compared using analysis of variance or the rank-sum test. Western blot results were analyzed using Image J software. The correlation between EGFR and EZH2 expression was analyzed by Pearson correlation analysis, and the correlation between co-expressed genes was analyzed by the Spearman correlation test. The strength of the correlation was determined by the following criteria: 0.00–0.19 “very weak”, 0.20–0.39 “weak”, 0.40–0.59 “medium”, 0.60–0.79 “strong”, 0.80–1.0 “very strong”. P value <0.05 was considered statistically significant.

EGFR and EZH2 were highly expressed in breast cancer tissues

Western blot and qRT-PCR results showed that the protein and mRNA expression levels of EGFR and EZH2 in breast cancer tissues were higher than those in benign breast lesions (Tables 4,5). 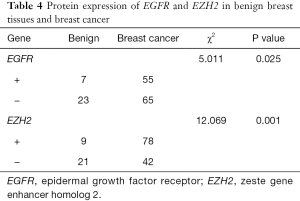 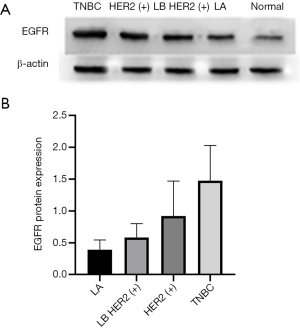 We analyzed the correlations between patient clinical data and EGFR and EHZ2 expression. As shown in Table 6, the simultaneous high expression of both EGFR and EHZ2 mRNA was related to lymph node metastasis and clinical stage (P<0.05). 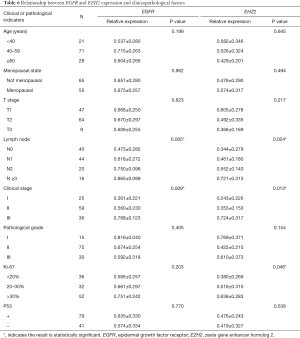 Screening of co-expressed genes and establishment of the PPI network

STRING and Cytoscape software were used to establish a PPI network of co-expressed genes. The MCODE plug-in was used to filter out the main functional modules in the network (Figure 4A, indicated in yellow). Meanwhile, the cytoHubba plug-in was used to screen out the top 10 genes [top 10 nodes ranked by maximal clique centrality (MCC)] (Figure 4B). These genes were consistent with the enrichment of functional modules screened by MCODE.

The hub genes were enriched by Gene Ontology (GO) and Kyoto Encyclopedia of Genes and Genomes (KEGG) pathway analysis through the STRING database. The results showed that these genes were involved in the biological processes of keratinization, epithelial development, epithelial cell differentiation, estrogen signaling pathways, breast cancer, prolactin signaling pathways, and acute granulocytes. The complete KEGG enrichment was shown in Table S1.

STRING and Cytoscape software were used to establish the PPI network of co-expressed genes. The MCODE plug-in and cytoHubba plug-in were used to filter out the main functional modules in the network (Figure 5A, indicated in yellow) and the top 10 genes (top 10 nodes ranked by MCC) (Figure 5B), respectively. The results of the functional modules and the hub genes were consistent. 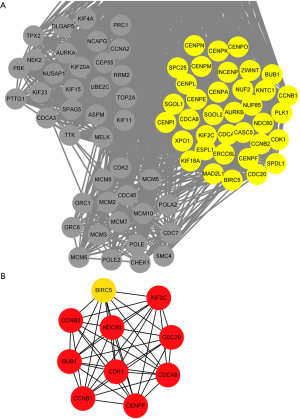 EGFR is mainly converted into dimers by binding to ligands, and affects downstream pathways through autophosphorylation, thereby regulating cell functions. At present, there are two typical pathways known to be involved. One is the Ras-Raf-MAPK pathway, also known as the mitogen-activated protein kinase pathway, which regulates the cell cycle and cell proliferation-related functions through the activation of MAPK, ERK1, and ERK2 kinases. A research pointed out that it plays an important role in the metastasis of breast cancer cells (15). The other is the PI3K-AKT-mTOR pathway, which mainly regulates the anti-apoptotic-related responses of cells by activating serine protein kinase (16). This pathway is also a typical pathway involved in the development of HER2 overexpression and TNBC. Inhibition of this pathway can improve the prognosis of patients (17). In this study, the expression of EGFR in TNBC and HER2-overexpressed breast cancer was higher than that in LA breast cancer, which was consistent with the results of Su et al. (18). Hub gene enrichment analysis results showed that these genes were enriched in the estrogen signaling pathway, breast cancer, and prolactin signaling pathway, indicating that EGFR may be involved in the negative transformation processes of TNBC-related receptor targets.

EZH2 mainly acts as a transcriptional inhibitor by catalyzing the trimethylation of lysine 27 (H3K27me3) of histone H3. The methylated H3K27me3 recruits PRC2 complexes to specific gene sites which silences the expression of target genes and promotes tumor metastasis (19). A study observed that reducing the expression of EZH2 in the cytoplasm by inhibiting its upstream factors can inhibit tumor metastasis (20). The hub gene analysis of EZH2 demonstrated that the above genes were mainly enriched in cell cycle-related biological processes such as mitosis, nuclear division, and chromosome separation, indicating that EZH2 may be involved in the progression of breast cancer by affecting the proliferation potential and clonality of cancer cells. In this study, the expression of EZH2 protein in TNBC was significantly higher than in other subtypes. Nie et al. (21) found that the inhibition of EZH2 and cyclin-dependent kinase 2 (CKD2) could re-express the estrogen receptor of TNBC tumor cells, thereby enabling the use of tamoxifen for endocrine therapy, which suggests that EZH2 may also participate in the transformation process of TNBC.

The hub genes of EZH2 were enriched in the FOXO signaling pathway, and the FOXO signaling pathway is one of the downstream pathways in which MAPK and PI3K work together. It acts on a variety of biological metabolic processes and key cancer metabolic pathways to affect tumor cell metabolism (22). A study pointed out that the up-regulation of FOXO3A, a member of the FOXO family, promotes angiogenesis, thereby enhancing the metastatic invasiveness of breast cancer cells (23). The FOXO family also plays an important role in the metastasis of many cancers (24-26). One study noted that the activation or inhibition of FOXO inhibited the growth of metastatic tumor cells (27), which is different from the role of FOXO as a tumor suppressor gene in traditional cognition, indicating that a certain amount of intracellular expression of FOXO may be necessary to maintain tumor cell survival. In this study, the protein and mRNA expression of EGFR and EZH2 were positively correlated. It may be that the regulatory effects of EGFR and EZH2 converge in the downstream FOXO pathway. The high expression of the two in TNBC may be related to the high proliferation and metastasis of TNBC. However, only high-level mRNA expression of EGFR and EZH2 was related to prognostic factors such as lymph node metastasis and clinical staging (P<0.05). This indicates that other factors are involved in the regulation of the processes during protein translation, some scholars have reported examples of negative correlation between mRNA and protein expression (28). This study also has some limitations. There are not enough cases and few types, most of which are fibroadenoma of breast, the difference of mRNA expression in different types of benign breast lesions is difficult to be analyzed, large sample and further research are needed.

In short, by revealing the high expression of EGFR and EZH2 in breast cancer, especially TNBC, along with the correlation with clinicopathological factors and possible common signaling pathways, it is expected to become a potential therapeutic target. High mRNA expression was closely related to lymph node metastasis and clinical staging, making it an important molecular marker for the poor prognosis of breast cancer.

Reporting Checklist: The authors have completed the REMARK reporting checklist. Available at https://dx.doi.org/10.21037/gs-21-505

Conflicts of Interest: All authors have completed the ICMJE uniform disclosure form (available at https://dx.doi.org/10.21037/gs-21-505). The authors have no conflicts of interest to declare.

Ethical Statement: The authors are accountable for all aspects of the work in ensuring that questions related to the accuracy or integrity of any part of the work are appropriately investigated and resolved. All procedures performed in this study involving human participants were in accordance with the Declaration of Helsinki (as revised in 2013). The study was approved by institutional ethics board of First Affiliated Hospital of Guangxi Medical University [No. 2021(KY-E-038)] and informed consent was taken from all the patients.