Anatomy of the nipple and breast ducts

Over time, variations of mastectomy came up and led to enhance the oncological safety and the possibility of an immediate breast reconstruction. Those techniques permit the conservation of skin, inframammary fold and specially the nipple areola complex (NAC) to achieve better outcomes.

Nowadays the number of publications describing a nipple sparing mastectomy (NSM) has strongly increased. Regarding self-esteem the nipple must be considered the identity of the breast. Therefore, in order to increasing safe indications of sparing NAC this paper will revise the main anatomical topics around the nipple and breast ducts.

History of the anatomy (1)

Several important remarks on the NAC anatomy were made by Sir Astley Cooper [1840]. Over the last 160 years some of the anatomy knowledge acquired has changed (2) since Cooper’s original work. For example, the glandular tissue is depicted as 15-20 lobes radiating out from the nipple, whereas Cooper stated that he observed up to 22 ducts leading to the nipple but considered that many of these ducts were not functional and that there were normally fewer than 12 patent ducts opening at the nipple.

Actually, the breast is described as being composed of glandular and adipose tissue held together by a loose framework of fibers called Cooper’s ligaments. Histological studies demonstrate that the lobes are composed of lobules, which consist of clusters of alveoli containing mammary secretory epithelial cells (3). The alveoli are connected to very small ducts that join to form larger ducts draining the lobules. These larger ducts finally merge to a unique duct for each lobe. Under the areola, this single duct is depicted as widening into a lactiferous sinus before narrowing at the base of the nipple and terminating at its orifice on the surface of the nipple (1,4). Adipose tissue of the breast is situated between lobes rather than within lobules.

The beginning of mastogenesis occurs around the sixth week of development. At 9 months there is a clear linear elevation, called “milk line”. By the eighth week, the mammary gland is formed from the thickening located in the epidermic “milk line” in the area of the final breast. There is a proliferation of basal cells that invade the underlying mesoderm and at the same time, it will occur a regression of mammary segment, yielding papillary primordium. After the 31st week of intrauterine life, papillary bag suffer occlusion, forming the NAC. The nipple will appear at time of birth.

The areola is recognized by forming a circular area free of hair sketches, also appearing branched glands around (Montgomery).

These anomalies could be classified into multiple conditions.

The NAC comprises two basic structures: the areola and the nipple (Figure 1). 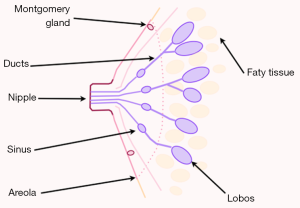 The areola has a round shape and a varying size, on average 3 to 6 centimeters, normally situated around the forth rib level. It has sebaceous glands that make projections on its surface, forming tubercle of morgani, or areolar glands, which during pregnancy become enlarged giving rise to tubercles of Montgomery.

Some authors believe that such structures represent accessory mammary glands and it has been observed milk secretion output with manual expression of these tubers (this supposition leads some surgeons to prefer the use of the skin sparing mastectomy instead of nipple or areola sparing mastectomies because of oncological concerns).

In the center of the areola emerges a papillar cylindrical formation varying in size, averaging 10 to 12 millimeters (mm) wide by 9 to 10 mm in height. Its skin is similar to the areola, but has no sebaceous glands. It has 10 to 20 corresponding pores as the output of the milk ducts.

The NAC has no subcutaneous tissue. The skin of the nipple rests on a thin layer of smooth muscle, areolar muscle fibers which are distributed in two directions: radial and circular. The muscle of Sappey responsible for circular fibers and the muscle of Meyerholz, formed by the radial fibers.

The areolar muscle is continued in the papilla with longitudinal and circular fibers surrounding the milk ducts along with connective tissue support. Its contraction is responsible for the ejection of secretion in the milk sinuses and for the telotism of the papilla, “mimicking an erection”.

Below the areolar muscle there is a thin layer of fat which disappears as it approaches the papilla. In this pre-mammary fat tissue layer vessels are found running on radiated sense.

The NAC is mainly supplied by internal mammary artery, also known as internal thoracic artery, which is branch of the subclavian artery. Internal mammary artery sends perforating branches along the first, second, third and fourth intercostal spaces, crossing the pectoralis major and irrigating the inner half of the breast, including the NAC. The intercostal arteries, which are branch of the aorta, also cross the pectoralis major and irrigate the deep surface of the breast, complementing the arterial vascularization of the NAC.

Venous drainage of breast is divided into two systems: superficial and deep. The superficial veins run along the anterior surface of the fascia, following the path of areola under the NAC, called venous plexus of Haller. 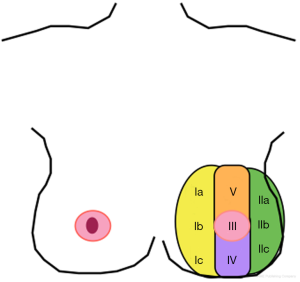 The skin surface of the breast is innervated by the first to sixth intercostal nerves and a supraclavicular branch of the superficial cervical plexus. The nipple is innervated by the fourth intercostal nerve. Objective investigations about the real impact of breast size on NAC sensibility threshold should be better clarified. Longo et al. (10) suggested that large and heavy breasts may potentially produce a chronic nerve traction injury, causing an inverse relationship between breast volume and sensibility. Concerning mammoplasty, the fibrotic scar at the areolar edges could be responsible for the progressive sensibility worsening over time 6 to 48 months. Another interesting mentioned phenomenon is neural organization in the somatosensory system after reduction mammoplasty. Phantom sensations are reported after partial and total breast amputation for cancer, possibly due to both rearranging of peripheral nerves and remapping on different subcortical and cortical somatosensory areas.

Ramsay et al. used ultrasound imaging to re-investigate the anatomy of the lactating breast. They showed that the mean number of main ducts at base of nipple was 9.6 (range, 6-18) and 9.2 (range, 4-14) for the left breast and right breast, respectively, which was not significantly different. The common sac-like appearance of lactiferous sinuses under the areola was not observed during scanning. The mean number of ducts and the diameter of main ducts were not related to nipple diameter, areola radius or milk production for individual breasts (2).

Characteristics of nipple are an important factor in the success of breast feeding. Minimum nipple length of seven millimeters has shown to be specific for a highly successful rate of breastfeeding (11). Short, flat, or inverted nipples can be related to physical and psychological negative effects for the breastfeeding mother.

It is clear that when a total mastectomy is performed, the removal of the NAC increases the sensation of mutilation, and the risk of tumor involvement should be considered within the spectrum of lumpectomy, skin-sparing mastectomy, and modified-radical mastectomy. Controlled-trials have clearly demonstrated the oncologic equivalence of modified-radical and skin-sparing mastectomies, where the risk of future breast cancer occurrence is low but not zero (12,13).

Current reports on NSM are most common to single-institution series. However the number of NSM procedures has increased over the past years. Tumor involvement is reported in over 35% of the patients when tumor size is more than 2 cm, especially when the tumor is situated in the subareolar area (14). NSM can be performed for prophylactic mastectomy and the treatment of selected breast cancer with oncologic safety. The risk of skin and nipple necrosis is a frequent complication of NSM procedure, and it is usually related to the volume of breast removed (15).

Despite varying indications and surgical protocols reports of the development of cancer in the NAC following NSM are remarkably rare. Different aspects should be considered to be a selection criteria for NSM indication as well as primary tumors located outside the areola margins, no nipple retraction or bloody discharge from the nipple, no retro areolar microcalcifications, no inflammatory signs and no retro areolar tumor infiltration at the frozen section (13,16,17). In our experience the most important aspect to allow the indication for a NSM is the negative frozen subareolar biopsy area during the surgery. The rate of a positive subareolar biopsy ranges between 2.2% to 12% (13,18).

Tumoral aspects will be important to take into account when considering the indication of adjuvant therapies. Overall, NSM is associated with high patient satisfaction rates (19-22).

The NAC may host benign pathologies, especially during pregnancy and puerperium. In addition, it has an important role in breast surgery when tumors can be resected through an incision that circles the areola (periareolar or “round block technique”). This technique can be used in numerous types of breast surgery. It allows the scar to go up to the periareolar circle which is in itself generally inconspicuous. In cases of tumoral excision, the round block produces a discreet scar and a more regular breast contour (23). Scar in this region maintains good aesthetic. It is recommended that the incisions are made just outside the areola in darker-skinned patients and immediately inside the areola in lighter-skinned patients. This is because the lighter shade of scar tissue.

Development of the current practice depends on a solid knowledge. Consistent knowledge of the anatomy of the NAC allows surgeons to perform better surgical procedures decreasing the sensation of mutilation without decreasing the chance of cure. The NAC is undoubtedly the identity of the breast.

The authors appreciate the cooperation of all colleagues in the Breast Unit—Barretos Cancer Hospital.