Recurrent laryngeal nerve (RLN) injury is a highly undesirable complication during thyroid surgery because it can lead to hoarseness, dysphonia, dysphagia, pulmonary aspiration, and life-threatening airway obstruction (1,2). Intraoperative neuromonitoring (IONM) is increasingly being used routinely in thyroid surgery, as it has been shown to prevent RLN injury by facilitating identification of the nerve anatomically, as well as enabling recognition of anatomic variants, leading to preservation of the nerve’s functional integrity (3,4).

Traditional intermittent IONM (I-IONM) is performed using a conventional nerve stimulator, which is a handheld probe that stimulates the potential target structure intermittently during surgery (5). Using this technique, the function of the RLN can only be evaluated at the moment of stimulation, and thus, the nerve is still at risk of injury during the time gap between stimulations. Furthermore, the need to repeatedly shift between surgical instruments and the conventional stimulator is troublesome for the surgeon and time-consuming.

Recently, new monitoring tools and methods have been developed to solve the problems of I-IONM and to enhance both the surgeon’s convenience and patient safety. Stimulating dissecting instruments with combined functionality were developed with the ability to perform both dissection and nerve stimulation. The first proposed method was to tape stimulation electrical wires directly to the dissecting tools (6,7). Many other variations of stimulating dissecting instruments have been proposed thereafter, such as detachable magnetic stimulators and attachable ring stimulators (8,9). However, we noticed that these approaches each have their own limitations, including being too costly, too bulky, or prone to detachment from dissecting tools.

We present the following article in accordance with the STROBE reporting checklist (available at https://dx.doi.org/10.21037/gs-21-327).

Anesthesia was induced with lidocaine (30 mg) and propofol (1.5 mg/kg) injections, then maintained with target-controlled infusions of propofol and remifentanil using infusion pumps. Rocuronium (0.6 mg/kg) was administered for muscle relaxation. A surgical thyroid pillow was used for positioning the patient prior to intubation to prevent inadvertent tube displacement. Endotracheal intubation was performed using an EMG endotracheal tube (Medtronic, Jacksonville, FL, USA). The surface electrodes on the tube were placed at the level of the vocal cords. Immediately after tube fixation, neostigmine (2 mg) and glycopyrrolate (0.4 mg) were administered for the reversal of neuromuscular blockade. One anesthesiologist (J.L) performed or supervised all anesthetic procedures.

Equipment setup and nerve monitoring were performed following the standardized procedures of the International Neural Monitoring Study Group (INMSG) guidelines (10). Nerve integrity monitoring (NIM) was performed using the NIM-response 3.0 system (Medtronic, Jacksonville, Florida). The stimulus current was set to 1 mA with a frequency of 4 Hz, the event threshold was set to 100 mV, and the stimulation duration was set to 100 ms. The cutoff value for the vagus nerve (VN) response and RLN response was set at 100 µV.

IONM procedures using the conventional stimulator and the patch stimulator

Both the conventional stimulator and the patch stimulator were used for each operation. The conventional stimulator (Prass Standard Monopolar Stimulator Probe, Medtronic, FL, Figure 1) was connected to the monitoring system and used during surgery by stimulating the nerves with the tip of the probe. The patch stimulator (Figure 2) was prepared by wrapping the adhesive electrode pad around one ring of the mosquito forceps used for dissection. After connecting the wires to the monitoring system, nerve monitoring was implemented with the mosquito forceps during dissection (Figure 3). 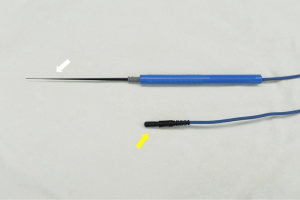 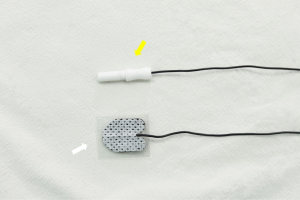 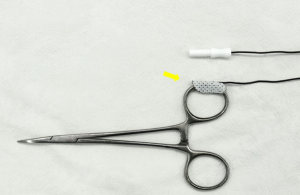 Figure 3 Patch stimulator. An adhesive patch electrode is applied on mosquito forceps (yellow arrow) to transfer electrical stimulus to the nerve through the instrument.

All data are presented as mean ± standard deviation for continuous variables. Statistical analysis was performed by the chi-square test, and two tailed values of P <0.05 were considered statistically significant. All analyses were performed using SPSS 26.0 software for Windows (IBM, Armonk, New York, USA).

A total of 15 consecutive patients (4 males and 11 females) were included in the study. Patient characteristics are summarized in Table 1. The mean age was 50.9±12.0 years, and the mean body mass index was 25.3±3.8. The mean tumor size at the longest diameter was 1.4±0.9 cm. Eleven (73.3%) patients underwent lobectomy and four (26.7%) underwent total thyroidectomy. The final pathological diagnoses consisted of 10 cases of papillary thyroid carcinomas, three cases of follicular cell adenomas, one case of Hurthle cell adenomas, and one case of Graves’ disease. No vocal cord palsy occurred in any of the patients (Table 1). 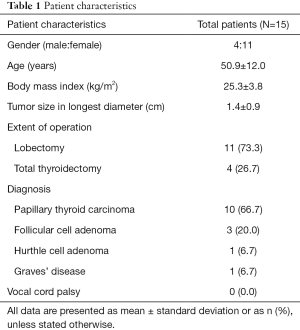 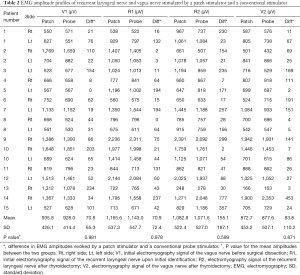 Although IONM is increasingly being routinely used in thyroid surgery and has become the standard practice in high-risk cases, there is still debate over whether I-IONM reduces RLN injury during thyroid surgery (11,12). RLN injury, recognized by loss of signal, has been reported even with I-IONM. The suggested reason for the loss of signal is that I-IONM does not provide real-time monitoring, thus I-IONM detects nerve injury only after the damage has occurred (4,13). The RLN is still at risk of injury proximally to the site of intermitted stimulation and during the interval between nerve stimulations (14).

Continuous IONM (C-IONM) was subsequently established to overcome the limitations of I-IONM (15). By placing a monopolar automatic periodic stimulation electrode on the VN, constant nerve function monitoring is possible throughout the whole course of surgery, allowing the surgeon to dissect and stimulate at the same time (16). However, C-IONM requires the risky procedure of dissecting the carotid sheath and fully exposing the VN to place the electrode on the nerve (17,18). Hemodynamic instability and reversible vagal neuropraxia have also been associated with C-IONM, suggesting that this approach may cause patient harm (19). Furthermore, there is still controversy over whether C-IONM actually reduces the risk of RLN injury (20).

There are some limitations to using the patch stimulator approach. One limitation is that the patch stimulator can only be applied to one surgical instrument at a time. If a surgeon decides to apply the patch stimulator to another instrument, the task of taking the adhesive off the first instrument and applying it to another can be cumbersome and time-consuming. However, because most surgeons usually use one stimulating dissecting instrument per surgery, one patch stimulator usually is sufficient. Another limitation of using the patch stimulator is that, like other stimulating dissecting instruments, the surgical instruments are not insulated. If the tip of the instruments comes in contact with structures other than the nerves, the electrical current will most likely be inadequately dispersed during stimulation, and as a result, the appropriate voltage needed for identifying the nerves may be insufficient. To solve this potential problem, a higher voltage of stimulus (2–3 mA) could be given to identify the nerves, and extra care should be made to avoid contact with surrounding structures during nerve stimulation. To overcome this issue, new surgical instruments that are entirely insulated except for the tip could be developed for effective nerve stimulation. We took care not to allow the monopolar or energy-based device to make contact with the stimulating dissecting instrument. Doing so could result in a blown fuse in the nerve monitoring system when the electric current is transferred to the system. Lastly, this study has a small sample size. Nevertheless, we showed the feasibility of the use of patch stimulators for IONM, and anticipate that this study will be a basis for further studies with larger sample size.

Authors would like to thank Jun Hwa Kang for the photographs.

Funding: This research was supported by a grant of Patient-Centered Clinical Research Coordinating Center funded by the Ministry of Health & Welfare, Republic of Korea (grant number: HI19C0481, HC19C0103).

Reporting Checklist: The authors have completed the STROBE reporting checklist. Available at https://dx.doi.org/10.21037/gs-21-327

Conflicts of Interest: All authors have completed the ICMJE uniform disclosure form (available at https://dx.doi.org/10.21037/gs-21-327). The authors have no conflicts of interest to declare.

Ethical Statement: The authors are accountable for all aspects of the work in ensuring that questions related to the accuracy or integrity of any part of the work are appropriately investigated and resolved. The study was conducted in accordance with the Declaration of Helsinki (as revised in 2013). The study was approved by Institutional Review Board of the Seoul Metropolitan Government Seoul National University Boramae Medical Center (IRB number: 30-2021-53) and individual consent for this retrospective analysis was waived.