The relationship between autophagy-related genes and the staging and prognosis of thyroid cancer: a bioinformatics analysis

In recent years, the relationship between autophagy-related genes and tumors has received attention. Autophagy refers to the responses of cells to changes in internal and external environmental pressures. It is a mechanism that exists in organisms to purify their own redundant or damaged organelles during their development and aging (9,10). Autophagy generally refers to macroautophagy and can be divided into the following 3 types: macroautophagy, small autophagy, and molecular chaperone-mediated autophagy (11,12). When apoptosis is inhibited, autophagy plays a role in promoting cell death (13,14). Autophagy has the dual effects of promoting and inhibiting the occurrence and development of tumors, and its specific mechanism is not completely clear. More studies need to be conducted to confirm whether autophagy can be used as a new target for tumor therapy (15,16). At present, some studies have shown that autophagy is closely related to thyroid cancer (17,18). However, differences in the expression of autophagy-related genes in thyroid cancer and their relationship with prognosis remains unclear. This study focused on the profile or landscape of autophagy-related genes in thyroid cancer tissues, and analyzed the relationship between autophagy-related genes and the prognosis of patients with thyroid cancer. We present the following article in accordance with the REMARK reporting checklist (available at https://dx.doi.org/10.21037/gs-21-480).

The standardized ribonucleic acid (RNA) sequencing data and corresponding clinical records of 497 patients were obtained from The Cancer Genome Atlas (TCGA) database loaded on cbioportal.org (19). In the original database, detailed clinical characteristics are recorded, including data on age, gender, tumor grade, pathological information, and laboratory test results. The diagnosis of thyroid cancer is based on the results of pathological examinations. The gene expression level is shown as the z-score of the messenger RNA (mRNA), and is compared between each subject. These data sets are publicly available, and have been exempted from ethical approval by the Ethics Committee of our hospital. Patients signed informed consent forms. The study was conducted in accordance with the Declaration of Helsinki (as revised in 2013).

Similar to other studies, in this study, a collection of autophagy-related genes was acquired from rectom.org (identification: R-HSA-1632852). Based on the completeness of the sequencing and prognostic data, 135 effective genes were screened to form a gene set (20). To distinguish between samples based on gene expression profiles, a cluster analysis was performed to examine the genetic expression of the entire genome. We identified cases with similar gene expression patterns from the entire study population. The transcription levels of related genes are shown as mRNA z-scores, and were clustered by the Stanford program using a hierarchical clustering algorithm, as described previously (21). We used the Java Treeview program (jtreeview.sourceforge.net) (22) and GraphPad Prism (version 8.0, GraphPad Software, Inc., San Diego, California, USA) to generate cluster heat maps and patterns for specific tumor stages.

SPSS 24.0 (IBM, NY, USA) was used for the statistical analysis. Continuous variables are expressed as mean ± standard deviation (mean ± SD). Categorical variables are represented by numbers and were compared using χ2 test or Fisher’s exact test. An analysis of variance was used to detect differences in gene expression levels between clusters. The correlations between the variables were determined by regression analyses. The survival curves of different groups were drawn and compared using the log-rank test in GraphPad Prism (version 8.0, GraphPad Software, Inc., CA, USA). A P value <0.05 was considered statistically significant.

Based on the hierarchical clustering, the 497 patients were divided into 2 clusters and 4 subclusters (see Figure 1A and Table 1). A comparison of the clinical parameters of the 2 clusters showed that there were differences in node (N)-stage, and a comparison of the 4 subclusters showed that there were differences in age and 4 other characteristics. In relation to the survival comparison, there was a difference in DFS between the 2 clusters, and there was a difference in OS and DFS between the subclusters (see Figure 1B,1C, and Table 2). 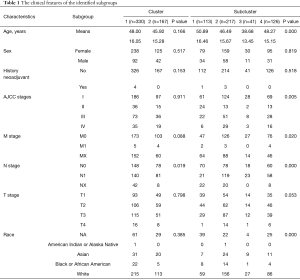 Table 1 The clinical features of the identified subgroups
Full table

A comparison of the differentially expressed genes (DEGs) showed that the 2 clusters had 114 DEGs, and the 4 subclusters had 131 DEGs (see Table S1). Figure 2A and Figure 2B respectively list the most significant genes.

The relationship between autophagy-related gene expression and various factors 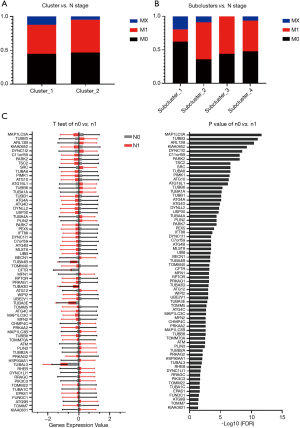 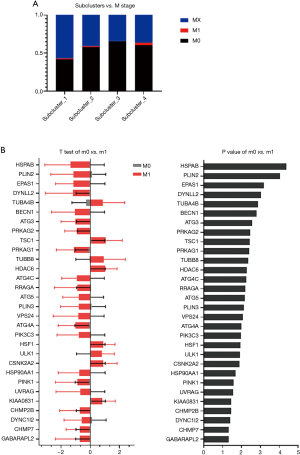 Figure 4 DEGs between M0 and M1. (A) M0, M1, and MX distribution had differences in the subclusters, P=0.020; (B) genes with different expressions (see Table S3 for the P values). DEG, differentially expressed gene. 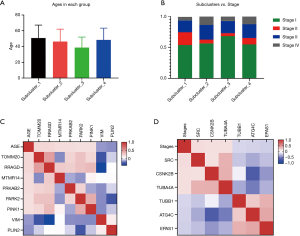 The relationship between clinical staging and differential genes 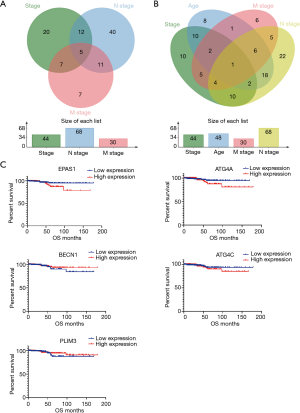 This study showed that certain clinical features are closely related to the prognosis of thyroid cancer, and gene expression patterns are related to autophagy. Statistical differences were found in relation to the N stage between the different clusters, and differences were also found in relation to age, the AJCC stage, M stage, N stage, and race among the subclusters. In terms of prognosis, there were differences in DFS between the 2 clusters. The long-term DFS rate of Cluster 2 was higher than that of Cluster 1. The OS and DFS rates were different among the 4 subclusters. There were many DEGs in the different sets. After analyzing some factors, the following 5 shared DEGs were identified in the differential genes grouped by tumor stage: EPAS1, ATG4A, BECN1, ATG4C, and PLIN3. These results indicate that these genes are closely related to the staging of thyroid cancer. After examining the differential genes across different ages, only 1 DEG (i.e., EPAS1) was identified. However, there does not seem to be a clear relationship between the genes whose expressions were different due to different factors and the prognosis of patients with thyroid cancer.

There has been an increasing trend in the incidence of thyroid cancer in recent years (3). Studies have shown that this increase is related to the timely diagnosis and close monitoring brought about by advancements in medical technology, such that cases that were not detected in time previously are now being discovered (3). Thyroid cancer has a variety of clinical features from indolent tumors with low mortality in most cases to very aggressive malignancies (such as anaplastic thyroid cancer). Thus, the main challenge doctors face is to identify high-risk patients and perform appropriate diagnostic tests to choose the most effective treatment plan (23). The prognosis of thyroid cancer also has a large heterogeneity, even regionally; however, most patients have a good prognosis (24,25). Many studies have examined the prognosis of the thyroid gland; for example, studies have been conducted on the BRAF gene mutation, RAS gene mutation, rearranged during transfection gene rearrangement, telomerase reverse transcriptase promoter mutation, and phosphatase and TENsin gene mutation. However, relatively few studies have been conducted on the relationship between these factors and tumor staging and their effects on long-term prognosis (26-28).

Hypoxia has been reported to be involved in multiple pathways regulating tumor cells (29). EPAS1 is a protein family member with a basic Helixdoop-helix/PAS structure, and it is a key hypoxia-related transcription factor related to tumor progression (30-32). Some research has shown that the expression of EPAS1 in normal tissues of the body is low or has no expression; however, it is abnormally high in malignant tumor tissues, and it is involved in a series of biological behaviors of cancer cells (33). Studies have also shown that EPAS1 plays a vital role in the pathogenesis of esophageal squamous cell carcinoma and may be used as a prognostic marker and therapeutic target (34). The present study showed that EPAS1 differed significantly in the AJCC stages/N stage/M stages, and in different ages, and is the only 1 gene with differential expression. Thus, EPAS1 may play an important role in the occurrence and development of thyroid cancer.

Putra et al. found that the genetic polymorphism of the EPAS1 gene may lead to changes in its gene expression level, thereby driving the development of cancer and becoming a prognostic indicator of non-small cell lung cancer (35). Mohammed et al. showed that plasma EPAS1 mRNA levels may be an indicator of poor prognosis for patients with advanced colorectal cancer. They also found that high levels of EPAS1 in plasma are associated with being aged over 50 years, disease recurrence, and patient mortality. When patients were divided into early (I and II) and late (III and IV) groups, correlations were observed between high levels of EPAS1 mRNA and poor DFS and late OS (36). In this study, we found that EPAS1 expression levels differed in TC patients of different stages and ages, but in the analysis of the relationship with long-term prognosis, no differences in the survival of patients with different expression levels of EPAS1 were found; however, this may be due to the sample size of the study.

This study had a number of limitations. First, a retrospective bioinformatics analysis was conducted. The TCGA database provides detailed clinical data, but the sample size was relatively small for the analysis of survival rates. There are often many prognostic-related factors. However the results of this study only showed some genes expressed differences in different groups, and no statistically significant relationships between the genes and long-term prognosis was found. In the future, prospective observational studies should be carried out to study specific genes to observe the effects of these genes on treatment responses and their relationships with the long-term prognosis of patients with thyroid cancer.

Reporting Checklist: The authors have completed the REMARK reporting checklist. Available at https://dx.doi.org/10.21037/gs-21-480

Conflicts of Interest: All authors have completed the ICMJE uniform disclosure form (available at https://dx.doi.org/10.21037/gs-21-480). The authors have no conflicts of interest to declare.

Ethical Statement: The authors are accountable for all aspects of the work in ensuring that questions related to the accuracy or integrity of any part of the work are appropriately investigated and resolved. These data sets are publicly available, and have been exempted from ethical approval by the Ethics Committee of our hospital. Patients signed informed consent forms. The study was conducted in accordance with the Declaration of Helsinki (as revised in 2013).