Thyroid cancer is the most common type of malignant tumor of the endocrine system and has seen a persistently increasing trend in incidence during recent years (1). The most common pathological type of thyroid cancer is papillary thyroid carcinoma (PTC), estimated to comprise 85% of diagnosed thyroid cancer cases (2). The recent increase in thyroid cancer can be attributed to a rapid increase in PTC (3). At present, the main clinical treatment for PTC is lobectomy plus isthmusectomy with central lymph node dissection, while total thyroidectomy with I131 radiotherapy is recommended for patients with high-risk factors such as multiple tumors, capsular invasion, and lymph node metastasis. The malignant degree of PTC is lower than that of other solid tumors, and the 10-year survival rate of PTC patients has reached up to over 90% after the provision of formal care (4).

The isthmus of the thyroid is a narrow banded structure connecting the left and right lobes of the thyroid gland, located directly in front of the trachea with its forepart covered by pretracheal fascia, strap muscles, and anterior neck skin. Given the small volume and secluded location of the isthmus, the incidence of papillary thyroid carcinoma in the isthmus (PTCI) is low, and there have been few relevant reports to date. The extent of PTCI surgical resection has not been specified by authoritative associations such as the American Thyroid Association (ATA) and the European Thyroid Association (ETA) (5,6). Some researchers have found that the pathological features of PTCI are multifocal, it can easily invade capsular and surrounding issues (7-13), and total thyroidectomy is recommended to address this. However, reports have found no significant difference in prognosis between patients with micropapillary PTCI treated with partial thyroidectomy and those treated with total thyroidectomy (14). Moreover, whether patients with cT1N0M0 solitary PTCI should receive central lymph node dissection, or unilateral or bilateral central lymph node dissection has not been fully elucidated.

Following the improvement of resolution for ultrasound used in screening, there has been a trend of early and increased discovery for thyroid cancer, including PTCI (15). The lack of clarity regarding the optimal treatment approach has the unfortunate effect of delaying timely intervention. Therefore, our study aimed to analyze clinicopathological characteristics and the effect of different surgical modalities on the prognosis of patients and explore the appropriate surgical extent for cT1N0M0 solitary PTCI. We present the following article in accordance with the STARD reporting checklist (available at https://dx.doi.org/10.21037/gs-21-357).

We collected a total of 18,550 medical records of PTC patients who had undergone surgery for the first time at Zhejiang Provincial People’s Hospital, Zhejiang Cancer Hospital, and Hangzhou First People’s Hospital from January 2001 to December 2017. By analyzing the results of preoperative color ultrasound examination of the thyroid and cervical lymph nodes, 356 patients with isthmic cancer were selected, including 124 patients with cT1N0M0 solitary PTCI. Patients with multiple cancers, extrathyroidal extension, tumors larger than 2 cm in diameter, family history of thyroid cancer, previous radiation exposure, postoperative radioiodine therapy, and suspected cervical lymph node metastasis or distant metastasis were excluded. Ultrasound imaging characteristics and pathological characteristics of all participants were analyzed, including age, gender, tumor size, presence of capsular invasion, nodular goiter, thyroid adenoma, and Hashimoto’s thyroiditis. All ultrasound imaging features and postoperative pathological features were reviewed by doctors with the title of vice-senior and above. This study was approved by the Ethics Committee of Zhejiang Provincial People’s Hospital, Zhejiang Cancer Hospital, and Hangzhou First People’s Hospital. All data were obtained with the patients’ informed consent. The study was conducted in accordance with the Declaration of Helsinki (as revised in 2013).

The results of preoperative color ultrasound examination of the thyroid and cervical lymph nodes of all participants were analyzed to assess tumor location, tumor size, and cervical lymph node status. The vocal cord function of participants was examined by laryngoscope, and indicators such as thyroid hormone, parathyroid hormone, calcitonin, and serum calcium were measured. The cT1N0M0 solitary PTCI in this study was defined by drawing 2 virtual lines perpendicular to the skin along the 2 edges of the trachea, with the intersection of the longest diameter and shortest diameter of the lesion considered the tumor center. If the tumor center of PTC was located between the 2 virtual lines, it was regarded as PTCI, while a solitary lesion without cervical lymph node metastasis was diagnosed as cT1N0M0 solitary PTCI. The American Joint Committee on Cancer (AJCC) thyroid cancer tumor, node, metastasis (TNM) staging system was used for tumor classification (8th edition, 2017). 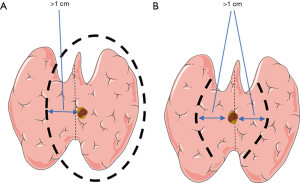 All participants were given thyroid-stimulating hormone (TSH) suppressive therapy after surgery. Routine thyroid function tests and neck B-ultrasound were performed every 3–6 months after surgery, and neck and chest computed tomography (CT) scans were performed every 12 months. Participants suspected of recurrence were sent to the hospital for further treatment. All the recurrent cases were confirmed by pathology or imaging. Postoperative complications (patients with similar preoperative symptoms were excluded) and postoperative recurrence were investigated through case review and follow-up. Postoperative complications included hoarseness, hypocalcemia, choking, chylous leakage, postoperative infection, and so on. While the definition of postoperative hypocalcemia varies widely in literature (16,17), the diagnostic criteria used in this study were: blood calcium level below 2.1 mmol/L 1 week after total thyroidectomy, or the presentation of the following symptoms: muscle pain, muscle weakness, arrhythmia for the first time after surgery, tingling and numbness in the face and limbs, and tendon hyperreflexia; symptoms lasting more than 6 months were considered permanent hypocalcemia. The diagnostic criteria for permanent postoperative hoarseness in this study were: no improvement for more than 6 months and the presence of recurrent laryngeal nerve palsy was supported by laryngoscopy. Statistical analysis for different surgical methods was performed to understand the impact of different surgical methods on the prognosis of patients with cT1N0M0 solitary PTCI, and participant clinical-pathological characteristics were further analyzed including age, gender, tumor size, capsule invasion, co-presentation of nodular goiter, Hashimoto’s thyroiditis, and adenomas, to determine their correlation with central lymph node metastasis in cT1N0M0 patients with solitary PTCI. Regression analysis was used to explore the influencing factors of the central lymph node metastasis in cT1N0M0 patients with solitary PTCI.

In statistical analysis of clinical and pathological features and postoperative complications in this study, the measurement data were represented by , and the count data were represented by the constituent ratio. The main tests used included the t-test, rank-sum test, and chi-square (χ2) test. Recurrence-free survival was analyzed using the Kaplan-Meier curve (KM curve), and logistic regression analysis was used for regression analysis. All statistical analyses were performed using SPSS version 25.0 (IBM Corp., Armonk, NY, USA). A P value <0.05, was considered statistically significant.

Participants were grouped according to the methods described in Materials and Methods, resulting in 32 (25.8%) being assigned to group A, 36 (29%) to group B, 24 (19.4%) to group C, and 32 (25.8%) to group D. Table 1 displays the participant demographic and clinicopathologic characteristics. The average sizes of primary lesions were 0.844, 0.939, 0.9, and 1.063 cm in the 4 groups. Primary lesions ranged from 0.1–3 cm in diameter. Age at diagnosis in the 4 groups ranged from 21 to 70 years old. There were no significant differences between patients in age, gender, tumor size, and whether there were capsular invasion, gland dissemination accompanied with nodular goiter, adenoma, and Hashimoto’s nodule (P>0.05). 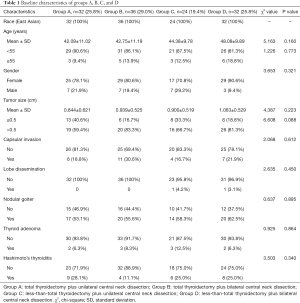 Table 1 Baseline characteristics of groups A, B, C, and D
Full table

Table 2 Comparison of postoperative complications between groups A, B, C, and D
Full table 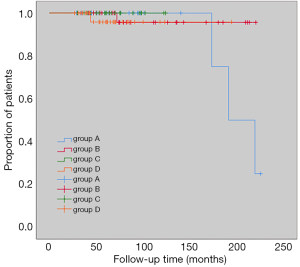 Figure 2 Association between the extent of surgery and recurrence-free survival in groups A, B, C, and D.

We applied receiver operating characteristic (ROC) curve analysis to evaluate the influence of the size of primary lesions on central lymph node metastasis for patients with CT1N0M0 solitary PTCI, and the results showed that primary lesions ≥0.55 cm posed a higher risk for central lymph node metastasis. The area under the ROC curve (AUC) was 0.609 (95% CI: 0.506 to 0.712, P=0.047), cut-off value 0.55, sensitivity 88%, specificity 33%, and Youden index 0.21 (Figure 3). 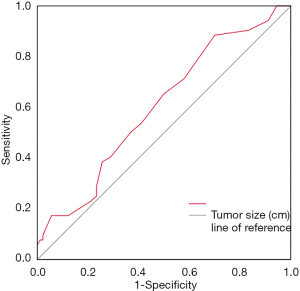 At present, there are no clear surgical guidelines for cT1N0M0 solitary PTCI, and the focus of debate is mainly on the extent of primary tumor resection and lymph node dissection. Lim et al. (14) found that there were no significant differences in the prognosis between unilateral combined isthmus thyroidectomy and total thyroidectomy dissection for early micropapillary carcinoma with negative lymph nodes located in the thyroid isthmus. According to the follow-up data of Nixon et al. (18) and Sugenoya et al. (19), the 10- and 20-year tumor-free survival rates of patients with microscopic tumors who received isthmusectomy alone were as high as 100%.

The results of this study showed that of the 124 participants with cT1N0M0 solitary PTCI, 43 (30.28%) had capsule invasion and 83 (58.45%) were complicated with nodular goiter. These values were consistent with those previously reported in the literature and significantly higher than those in patients with glandular lobe PTC (7-9,11-13). This may be due to the limited growth environment of PTCI, which makes it easier for tumor cells to spread through blood vessels or the lymphatic system, involve the capsule, and even invade extra-glandular tissues. In our study, KM analysis showed that there was no significant difference in postoperative recurrence-free survival among different extents of thyroidectomy and different methods of lymph node dissection among participants with cT1N0M0 solitary PTCI. This is in contrast to the findings of Karatzas et al. (8), who suggested that total thyroidectomy plus central neck dissection is an appropriate procedure for PTCI regardless of tumor size. In addition, patients who received total thyroidectomy plus bilateral central neck dissection were more likely to develop postoperative complications such as hypocalcemia than those who received less-than-total thyroidectomy plus bilateral central neck dissection, which was consistent with the results of Lei et al. (20). This may be because less-than-total thyroidectomy does not touch the unilateral or bilateral superior pole of the thyroid, and can minimize injury of the parathyroid and recurrent laryngeal nerve to prevent postoperative hypocalcemia and hoarseness (21). Less-than-total thyroidectomy is more suitable for patients with cT1N0M0 solitary PTCI.

In conclusion, PTCI is more likely to be associated with pathological features such as multifocality and invasion of capsular and surrounding tissues, but there was no significant difference in various surgical modalities for recurrence and metastasis of cT1N0M0 solitary PTCI. Patients are more likely to develop postoperative complications such as hypocalcemia and hoarseness after total thyroidectomy; thus, patients with cT1N0M0 solitary PTCI are recommended to undergo less-than-total thyroidectomy. Among such patients, central lymph node dissection was recommended for those who were prone to have central occult lymph node metastases with tumor size ≥55 cm, age under 55 years, and without nodular goiter.

Reporting Checklist: The authors have completed the STARD reporting checklist. Available at https://dx.doi.org/10.21037/gs-21-357

Conflicts of Interest: All authors have completed the ICMJE uniform disclosure form (available at https://dx.doi.org/10.21037/gs-21-357). The authors have no conflicts of interest to declare.

Ethical Statement: The authors are accountable for all aspects of the work in ensuring that questions related to the accuracy or integrity of any part of the work are appropriately investigated and resolved. The study was conducted in accordance with the Declaration of Helsinki (as revised in 2013). This study was approved by the Ethics Committee of Zhejiang Provincial People’s Hospital, Zhejiang Cancer Hospital, and Hangzhou First People’s Hospital. All data were obtained with the patients’ informed consent.