We present the following article in accordance with the STROBE reporting checklist (available at https://dx.doi.org/10.21037/gs-21-254).

This is a cohort study including 68 patients with a history of unilateral mastectomy, who underwent delayed breast reconstruction from August 2016 to October 2019 at the department of plastic and reconstructive surgery at a single tertiary hospital by three plastic surgeons. The study was conducted in accordance with the Declaration of Helsinki (as revised in 2013). The study was approved by Institutional Review Board (IRB No. 1606-056-770) and informed consent was taken from all the patients. For 31 patients, the study was conducted prospectively. The retrospective chart review included additional 37 patients. 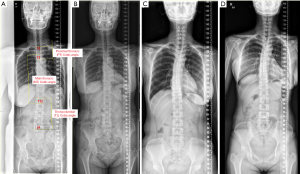 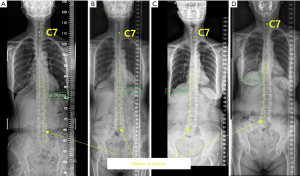 The indications for extra X-rays were unknown. No clinical information about the reasons for X-rays were indicated in the electronic medical records. They were taken from other departments for unknown reasons.

For quality control, analysis of Cobb angle and coronal spinal balance were done by one plastic surgeon and one orthopedic surgeon who did not perform operation on any of the patients included.

All statistical analysis was performed by the Medical Research Collaborating Center Seoul National University Hospital using SAS statistical software (SAS system for Windows, version 9.3; SAS institute, Cary, NC, USA). An independent t-test was performed to evaluate whether the postoperative changes in the Cobb angles and coronal spinal balance were statistically significant. A t-test or Wilcoxon rank sum test were performed to evaluate whether there was a difference in the distribution of coronal spinal balance, each Cobb angle, flap inset/implant weight and the patient’s age. The Pearson correlation coefficient was evaluated. Both linear, and multiple regression analyses were performed to assess the relationship between each Cobb angle, flap inset/implant weight, patient age, height, weight, body mass index (BMI), duration between breast reconstruction and mastectomy, and duration between delayed breast reconstruction and exposure of the postoperative radiographs. Linear and multiple regression analysis were performed to assess the relationship between coronal spinal balances, flap inset/implant weight, patient age, and the duration without breast.

The preoperative and postoperative changes in the Cobb angles and coronal spinal balance are summarized in Table 1. The median of patient age, height, weight, BMI implant/flap inset weight, duration between mastectomy and delayed breast reconstruction, duration between delayed breast reconstruction and date of postoperative chest/spine radiograph, change in coronal spinal balance, and Cobb angle of PT, MT, and TL are listed in Table S1.

The median patient age was 50.07 years. The median height, body weight, and BMI of the patients were 158.35 cm, 59.1 kg, and 23.65 kg/m2, respectively. The median implant or flap weight was 450 cc or gram. The median duration between mastectomy and delayed breast reconstruction was 6 years and seven patients were excluded from this calculation due to the exact date of mastectomy being unknown. The median duration between the date of breast reconstruction and postoperative radiograph was 2 years. The median changes in the PT and MT Cobb angles were −0.33 and −0.34 degrees, respectively. Changes in the TL Cobb angle and coronal spinal balance were only measured in 29 patients for whom whole spine radiographs were available. The median change in the TL Cobb angle and coronal spinal balance was −0.69 degrees and 3.75 mm, respectively. 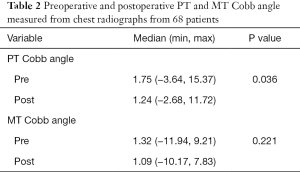 The effect of immediate breast reconstruction on preventing spinal postural changes has been observed in several studies. Ciesla and Polom (6) compared the change in body posture among women who underwent radical mastectomy alone and those who underwent skin-sparing mastectomy with immediate breast reconstruction using the Becker-25 prosthesis. Three-dimensional body surface analysis was performed in the coronal sagittal, and transverse planes preoperatively and 6, 12, 18 and 24 months postoperatively. Significant deviations from the proper body posture were observed in women who received radical mastectomy alone. The postural deviation first appeared 6 months postoperatively, and further deviations were observed until 18–24 postoperative months. In contrast, the changes in body posture among the women who received immediate reconstruction did not differ greatly from the control group.

Atanes Mendes Peres et al. (11) compared patients who underwent immediate breast reconstruction using an abdominal flap after mastectomy and patients who received mastectomy alone. Preoperative and postoperative trunk alignments were evaluated using the antero-posterior and lateral side views via the Postural Analysis Software/Software de Análise Postural (PAS/SAPO). Significant differences in vertical trunk alignment were observed between the two groups. Greater trunk rotation was observed in the patients that did not undergo breast reconstruction. In contrast, no significant differences in head, shoulder, scapula or pelvis alignment were observed between the two groups.

Coronal spinal balance is considered normal when the value is within 20 mm. When the displacement is greater than 20 mm, it is defined as coronal decompensation (20). The preoperative and postoperative coronal spinal balances of all patients were within 20 mm. Thus, none of the patients showed coronal decompensation before undergoing breast reconstruction. There were some cases in which the displacement increased after breast reconstruction. This may be due to excessive compensatory spinal changes due to the breast reconstruction before finding a new stable spine position.

Postoperative radiographs were taken on average 1.48 years after the delayed breast reconstructions were performed. As such, there may not have been enough time for the spine to compensate and adjust, after implant or flap weight has been added to the affected side. If the postoperative Cobb angles and coronal spinal balance were measured at a much later time from the date of the breast reconstruction, the change in Cobb angles and coronal spinal balance may have been different.

The study only evaluated patient’s spinal posture in 2-dimensional radiographs although spine deformity can be more clearly evaluated in 3-dimensional imaging. As a result, it does not take into account any twists or torsional changes of the spine.

Reporting Checklist: The authors have completed the STROBE reporting checklist. Available at https://dx.doi.org/10.21037/gs-21-254

Conflicts of Interest: All authors have completed the ICMJE uniform disclosure form (available at https://dx.doi.org/10.21037/gs-21-254). The authors have no conflicts of interest to declare.

Ethical Statement: The authors are accountable for all aspects of the work in ensuring that questions related to the accuracy or integrity of any part of the work are appropriately investigated and resolved. The study was conducted in accordance with the Declaration of Helsinki (as revised in 2013). The study was approved by Institutional Review Board (IRB No. 1606-056-770) and informed consent was taken from all the patients.

Open Access Statement: This is an Open Access article distributed in accordance with the Creative Commons Attribution-NonCommercial-NoDerivs 4.0 International License (CC BY-NC-ND 4.0), which permits the non-commercial replication and distribution of the article with the strict provision that no changes or edits are made and the original work is properly cited (including links to both the formal publication through the relevant DOI and the license). See: https://creativecommons.org/licenses/by-nc-nd/4.0/.