Relationship between anti-acetylcholine receptor antibodies and the development of post-thymectomy myasthenia gravis in patients with thymoma: a single-center experience

This study is cohort study. We present the following article in accordance with the STROBE reporting checklist (available at https://dx.doi.org/10.21037/gs-21-287).

We conducted a retrospective review of the medical charts of patients who had been diagnosed as having thymoma and had undergone surgical resection at the Department of Thoracic Surgery at the University of Occupational and Environmental Health (Japan), between April 1st, 2013 and March 31st, 2020.

We extracted data from 26 patients with no history of MG at the time of surgery; those with thymic carcinoma were excluded. We evaluated the association of outcomes with preoperative anti-acetylcholine receptor antibody (anti-AChR-Ab) levels and post-thymectomy MG. MG was diagnosed using multiple tests, including a serum anti-AChR-Ab test, an edrophonium test, a single-fiber electromyography test, and a Harvey-Masland test. Among the patients with high preoperative anti-AChR-Ab levels, one patient developed MG after the surgery. We investigated the association between preoperative anti-AChR-Ab levels and post-thymectomy MG in the hope that it would be useful for future postoperative follow-up of thymoma.

The study was conducted in accordance with the Declaration of Helsinki (as revised in 2013). The study was approved by the ethics committee of the University of Occupational and Environmental Health (Japan; NO.: H26-15), and individual consent for this retrospective analysis was waived.

At our institution, anti-AChR-Ab levels are routinely measured preoperatively for mediastinal tumors suspected to be thymomas. In cases with high AChR-Ab levels before surgery, the treating doctor decides whether the anti-AChR-Ab level needs to be measured regularly after surgery. Measurement of anti-AChR-Ab levels is outsourced to BML which was a Laboratory testing service (including endocrine, plasma protein, biochemical, viral, immunological, hematological, bacteriological, and histopathological tests) and related services, and performed using radioimmunoassay (RIA). ‘Cosmic’ II was used as the test reagent.

We chose the χ2 test for the bivariate analysis of categorical data as a statistical tool to clarify the association between MG and preoperative anti-AChR-Ab levels. Differences were considered significant at P<0.05. All statistical analyses were carried out using EZR (Saitama Medical Center, Jichi Medical University, Saitama, Japan), a graphical user interface for R (The R Foundation for Statistical Computing, Vienna, Austria).

A flow diagram of the patient population is shown in Figure 1. The 26 patients with thymomas but without preoperative MG (median age: 62 years; 8 men and 18 women) had the following clinical characteristics (Table 1): World Health Organization classifications of AB (n=8), B1 (n=9), B2 (n=6), B3 (n=1), and others (n=2) and Masaoka stage I (n=12), II (n=9), III (n=3), and IVa (n=2). Complete resection was achieved in all the patients. Three patients (11.5%) received postoperative therapy. Of these, two received postoperative radiation therapy and one received intrathoracic cisplatin after surgery. One patient showed thymoma recurrence but did not develop postoperative MG. We encountered a rare case of thymoma associated with pleural dissemination for which extended pleurectomy decortication was performed. This case did not recur for three years after surgery. We have reported this case previously (6). 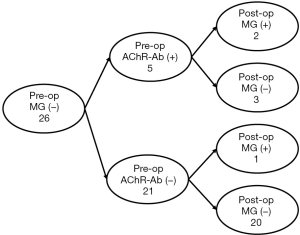 A summary of patients with high preoperative anti-AChR-Ab levels is shown in Table 2. The patient in Case 1 had symptoms of suspected MG with high anti-AChR-Ab levels and was referred to a neurologist. The neurologist performed the Harvey-Masland and Tensilon tests to diagnose MG. The patient in Case 2 was diagnosed as having MG at another institution; hence, we could not collect data on the post-surgery anti-AChR-Ab titers and the day of MG onset. These two cases had no postoperative recurrence of thymomas.

In our study, anti-AChR-Ab was measured postoperatively in four of five (80%) patients with preoperative anti-AChR-Ab positivity. In the remaining two patients, anti-AChR-Ab measurements were stopped, and they underwent regular clinical observations instead [median anti-AChR-Ab observation period: 519 days (10–1,028 days)].

Thymomas are generally thought to exhibit immunological activity and are associated with a variety of autoimmune diseases, including MG. The principle of treatment for thymoma is surgical resection. Extended thymectomy also involves removal of fat around the thymus. The thymus, an organ critical to the immune response, is also a source of disease-causing AChR autoantibody-producing B cells. Nicotinic acetylcholine receptor autoantibodies were identified in the sera of >85% of patients with MG (7). Thymectomy results in the suppression of both cellular and humoral immunity and a reduction in anti-AChR-Ab levels, which further leads to sustained improvement and remission of clinical symptoms in patients with MG (8).

MG and AChR are closely related, and this study was designed to determine whether preoperative AChR is associated with post-thymectomy MG. This was a single-center study with a few cases, which limited our ability to conduct comparative studies.

Complete resection was achieved in all the cases in this study. Two of the three patients with post-thymectomy MG underwent extended thymectomy, and the fat around the thymus was removed. Nevertheless, we observed patients who developed MG after surgery. Although we did not investigate the cause of MG after thymoma surgery in this study, circulating T and B cells were thought to be involved in the development of MG after thymectomy, as described earlier.

The clinical characteristics of patients with postoperative MG from the three studies are shown in Table 4 (1,13-15). Yamada et al. reported that in addition to serum anti-AChR-Ab levels, a history of type B1/B2/B3 thymoma and incomplete resection were risk factors for post-thymectomy MG (1). Mineo et al. and Nakajima et al. reported that only a high anti-AChR-Ab titer was a risk factor for post-thymectomy MG (13,14). Marcuse et al. recommended analyzing anti-AChR-Ab levels (15).

Table 4 A review of the literature
Full table

The limitations of this study are its small sample size and its single-center retrospective design. Because small sample sizes lead to limited statistical power, evidence on using anti-AChR-Ab levels as a predictor of MG after thymectomy is limited. Therefore, our study results may not be generalizable. In the future, our study can impact perioperative management beyond preoperative prediction of the onset of postoperative MG. For postoperative cases of thymoma with high anti-AChR-Ab levels before surgery, determining whether the anti-AChR-Ab level needs to be measured on a regular basis after surgery was per the discretion of each attending physician. Our results suggest that in the future it may be necessary to measure anti-AChR-Ab levels on a regular basis after surgery.

Preoperative and postoperative AChR-Ab positivity might be associated with post-thymectomy MG. In particular, postoperative anti-AChR antibody decline may be a good prognostic factor about the onset of MG after surgery. Therefore, regular anti-AChR-Ab measurement after thymectomy is required.

We would like to thank Editage () for English language editing.

Reporting Checklist: The authors have completed the STROBE reporting checklist. Available at https://dx.doi.org/10.21037/gs-21-287

Conflicts of Interest: All authors have completed the ICMJE uniform disclosure form (available at https://dx.doi.org/10.21037/gs-21-287). The authors have no conflicts of interest to declare.

Ethical Statement: The authors are accountable for all aspects of the work in ensuring that questions related to the accuracy or integrity of any part of the work are appropriately investigated and resolved. The study was conducted in accordance with the Declaration of Helsinki (as revised in 2013). The study was approved by the ethics committee of the University of Occupational and Environmental Health (Japan; No. H26-15), and individual consent for this retrospective analysis was waived.