The incidence of breast cancer diagnosis has been rising steadily (1) and an increasing number of women are opting for post-mastectomy reconstruction (2). In comparison to implant-based techniques, autologous breast reconstruction based on deep inferior epigastric artery perforator (DIEP) flap yields long-lasting, natural-appearing outcome and is, hence, considered the gold standard reconstruction (3-9).

Due to high individual variation in the vascular anatomy of the DIEA perforators (10), computed tomographic angiography (CTA) is performed to help select ideal perforator and flap design preoperatively (11-16). Advances in the hardware of CTA, such as an increasing number of detector rows (17), and software, such as OsiriX (Pixmeo, Geneva, Switzerland) (18), have ensured its precision, fast speed and reliability.

As a result, the use of CTA in DIEP flap planning has led to reduced postoperative flap complications, such as fat necrosis, flap loss and donor site morbidity (12,19-22). Interestingly, Smit et al. have reported a significant reduction in operating time using CTA in DIEP reconstructions (264 vs. 354 mins, P<0.001) (11). However, Rozen et al. have reported no statistically significant reduction in the total operating time of both unilateral and bilateral cases (P=0.57 and 0.079, respectively) (12). This may be attributed to the fact that current imaging modalities are limited by being displayed on a two-dimensional (2D) surface like a computer screen. Novel ways of utilising the CTA data, such as 3D printing, may enable intuitive spatio-temporal understanding of the involved anatomical structures.

This prospective study aims to assess the feasibility and usefulness of 3D designed DIEP perforator templates as a practical tool for DIEP breast reconstruction.

In this prospective case series of 25 abdominal wall-based flaps in 20 patients over 12-month period (June 2016 to June 2017), we use routine CTA scan data to create patient-specific DIEP templates for preoperative planning. The study conformed to the provisions of the Declaration of Helsinki (as revised in 2013). Ethical approval was obtained through Peninsula Health HREC, approval number PH/3DP, and all participants gave informed consent before taking part.

Design of the DIEP template

Following this, a 3D image of the patient’s abdominal wall with perforations indicating the location of perforators is created from the DICOM files in 3D Slicer. Using the “threshold” function, a range of Hounsfield unit-derived arbitrary values can be selected to automatically generate a 3D image of the abdominal wall. Scrolling through the axial slices, using “RectangleEffect” tool and erase function, holes and lines are created in the 3D image at the location of DIEA perforators, their intramuscular course and the DIEA pedicle. Similarly, a notch in the 3D image is created at pubic symphysis. The final 3D image is exported in STL (standard tessellation language) format.

In Autodesk MeshMixer, the STL file is made suitable for clinical application. Using “SphereDisc” brush tool, the perforators, their intramuscular course and the DIEA are enlarged to enable a marking pen to fit. Then, the 3D image is cropped around four edges to fit inside a 3D printer. Using “separate” function, anterior surface of the 3D image is isolated and then, using “extrude” function, it is thickened 5 mm into a physical template. Finally, using “smooth” function, the file is smoothed out and then exported in STL format.

In Cura, this final STL file is transformed into a 3D printer-friendly file. 3D slicing software, like Cura, automatically generates support structures and creates an instruction for a 3D printer to follow. This file is exported in G-code format via an external storage device.

All patients undergoing postmastectomy autologous breast reconstruction with abdominal wall-based free flaps, regardless of whether immediate or delayed, unilateral or bilateral, and DIEP or MS-TRAM flaps, were recruited from three university-affiliated hospital networks. Exclusion criteria include contraindication to intravenous contrast preventing preoperative investigation with CTA, patient decline and pregnancy. Historical control cases were derived from reconstructions performed at the same institutions over the preceding 12 months (June 2015 – June 2016).

Accuracy of the DIEP template

In order to assess the templates accuracy and reliability, perforator distance from the base of umbilicus (horizontal & vertical) was measured using a calibrated calliper. We selected the biggest perforator from each hemi-abdomen. This step was repeated using perforators detected using handheld Doppler probes (33) and reported measurements from the patients CTA (34). Intraoperative measurement of the perforator distances was made using a sterile metal ruler and performed just prior to the flap being disconnected at the DIEA origin. This was achieved with measurements from CTA, with Doppler and with the template applied topically to the abdominal wall directly (see Figure 2). 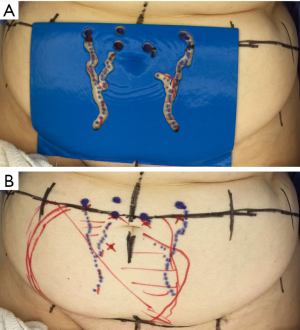 Figure 2 Clinical application of the 3D-printed DIEP template in use. The template was orientated on the abdomen by the umbilicus, notch at the pubic symphysis and the abdominal skin crease (A). Markings from the template were used for flap design and the skin island (B). DIEP, deep inferior epigastric artery perforator.

In order to assess the potential role of the template in improving intraoperative perforator identification, we measured the time taken during suprafascial flap dissection. Recently, Marsh et al. from Chelmsford, UK, described a technique to divide the DIEP flap reconstruction procedure into 101 individual steps (35). As a result, we have measured the time taken during the steps 24 (“lateral raise of flap off rectus fascia with handheld diathermy to just lateral to lateral row perforator”) and 25 [“dissection down to and identification of perforator (match to CT) using bipolar diathermy and/or McIndoe’s dissection scissors”].

Since June 2015, at our institution, we have been routinely recording the operating time of the Chelmsford 101 individual steps in free DIEP flap breast reconstructions. As a result, our outcomes from the current study could be accurately correlated to the historical control.

Perforator distances from the template, handheld Doppler probes, CTA report, and intraoperative findings are recorded using calibrated callipers and sterile rulers. They are rounded to the nearest 1mm. Intraoperative perforator identification time and intramuscular dissection time are recorded using a stopwatch and rounded to the nearest 1 second. The comparative analysis was performed using Stata statistical software package (StataCorp, College Station, TX, USA). The perforator distances were analysed using Kruskal-Wallis equality-of-populations rank test while the surgical times and the survey responses were analysed using the Student’s t-test. A P value of less than 0.05 was accepted as statistically significant.

Accuracy of the DIEP template

The template had a dissimilar impact on different stages of the operation. Mean intraoperative perforator identification time was significantly reduced by 7.29 minutes (15.07 vs. 22.36 mins; P=0.02). However, there was no statistically significant difference in mean intramuscular dissection time (93.95 vs. 79.62 mins; P=0.34).

The template was useful for preoperative marking (mean score: 8.6/10) and planning (7.9/10) (Table 2). However, it was not useful for intramuscular dissection (5.9/10) and, as a result, did not influence the clinical management significantly (5.3/10). Encouragingly, the surgeons appeared enthused about its potential and were keen to use the template again (8.8/10). When the responses were compared between flap-raising surgeons and the second surgeons, there was no difference. Similarly, there was no statistical differences between surgeons and surgical trainees. Interestingly, there was a trend in the difference between surgeons and surgical trainees in their perceive utility of the template in intramuscular dissection (4.7 vs. 6.3, P=0.07). However, since the response from trainees was equally low (6.3/10), it is most likely that trainees had similar doubts about its usefulness in intramuscular dissection.

There was no immediate flap-related postoperative complications. Mean length of stay was 6.4 days (range: 5–8). At 3-month follow-up, there was no reported donor-site morbidity clinically, such as abdominal wall bulge and ventral hernia.

In the current prospective case series, we demonstrate our technique of creating a 3D-printed, patient-specific DIEP template, assess its accuracy and utility and illustrate outcomes to our historical control.

Usually, a radiologist would report from CTA the diameter of suitable perforators and their location in horizontal and vertical distances from the umbilicus. This is marked out on the patient by the surgeon preoperatively and confirmed using a handheld Doppler probe. Unsurprisingly, during observation, transcription and interpretation of the report, errors can be introduced and compromise efficiency (36). Thus, Miranda et al. have proposed, in their proof-of-concept study, a method of creating patient-specific 2D DIEP templates using transparent acetate sheets, punch biopsy holes, and coronal images from the CTA (36). However, this technique is rather cumbersome and is significantly susceptible to observation and transcription errors. Moreover, the flat acetate sheet ignores the curved contour of the abdominal wall. To this effect, 3D printing can be useful.

The template accurately identifies the position of DIEA perforators, their intramuscular course and the DIEA pedicle. Furthermore, it improves preoperative marking and planning, leading to statistically quicker intraoperative identification of the perforators. This may be because the template removes the guesswork and interpretation errors from traditional written CTA reports and is more intuitive to apply since they lie accurately on the abdomen. Furthermore, the tactile feedback from templates likely enhances visuospatial understanding of the involved perforator anatomy, leading to more confident dissection (38). However, despite being statistically significant, the reduction of 7.29 minutes may be too small to be clinical significant. Notably, the template appears not useful for intramuscular dissection, which is arguably one of the most technically challenging aspects of DIEP flaps. This is most likely because despite being 3D-printed, clinical information is essentially embossed in 2D on to the template.

3D printing the entire course of a DIEA perforator and its surrounding soft tissues, similar to what Mehta et al. have reported in a proof-of-concept study, may be more useful for intramuscular dissection (39). However, their technique would have been difficult to reproduce for routine clinical application due to software- and hardware-related issues. Using any latest imaging software, it remains difficult to differentiate DIEA perforators from the rectus abdominis in CTA both visually and digitally, especially in patients with physiologically smaller vessels, without significantly increasing the contrast dose and radiation. Using MRA, the image resolution is even poorer (5.0 vs. 0.5 mm slice thickness) since scans have to be performed quickly to prevent motion artefacts. Recent advances in MRA technology can account for motion artefacts without compromising image quality, but they are not yet available widely (40). In contrast to the multi-colour, multi-material, industrial-grade 3D printer used by Mehta et al. that costs in excess of AUD 100,000, our desktop 3D printers (Ultimaker 3E, Moment) can only print in single material, making it difficult to print intramuscular course of DIEA perforators. As a result, most clinicians currently outsource 3D printing at a cost of more than AUD 1,000 per model.

We demonstrate that our 3D-printed, patient-specific DIEP template accurately identifies DIEA perforators, and significantly reduces intraoperative perforator identification time by, albeit 7.29 minutes, and, as a result, it may become a useful tool in preoperative marking and planning.

The current work has been accepted and presented at the 9th Congress of World Society for Reconstructive Microsurgery in Seoul, South Korea, and at the Australasian Society of Plastic Surgery’s Plastic Surgery Congress 2017, Gold Coast, Australia.

Conflicts of Interest: All authors have completed the ICMJE uniform disclosure form (available at https://dx.doi.org/10.21037/gs-21-263). Warren M. Rozen serves as an unpaid Associate Editor of Gland Surgery from Mar 2018 to Feb 2023. The other authors have no conflicts of interest to declare.

Ethical Statement: The authors are accountable for all aspects of the work in ensuring that questions related to the accuracy or integrity of any part of the work are appropriately investigated and resolved. The study conformed to the provisions of the Declaration of Helsinki (as revised in 2013). Ethical approval was obtained through Peninsula Health HREC, approval number PH/3DP. The participants gave informed consent before taking part.