The incidence of thyroid carcinoma (TC) has increased in recent years. It is the 11th most common cancer globally and ranks 7th among all malignant tumors in China (1). The most common pathological type of thyroid cancer is papillary thyroid cancer (PTC), making up about 85–90% of all TCs. Surgery is the most effective treatment for patients with PTC, and the postoperative overall survival can exceed 90% at 10 years (2,3). Despite the good overall survival rates, cervical lymph node metastasis (CLNM) is a major risk factor for recurrence and distant metastasis of PTC and can severely affect patient prognosis (4,5). Indeed, CLNM, especially in the central region, can reach a metastasis rate as high as 20–90% (2,6,7).

In the past, most surgeons performed central lymph node dissection (CLND) exclusively in level VI. However, in recent years, it has been advocated that the anterior superior mediastinal lymph node (level VII) be classified as the central area of lymph node dissection (8-11). In fact, the 8th American Joint Committee on Cancer (AJCC) classified this lymph node as a central region lymph node (12). Furthermore, the Chinese Thyroid Association (CTA) guidelines also suggest that PTC patients should receive routine CLND to reduce the risk of long-term recurrence. Hence, in our department, prophylactic or therapeutic CLND, including level VI and level VII, is routinely performed in all PTC patients.

To achieve a more radical effect, our department uses carbon nanoparticles (CNs) (Figure 1). CNs are kind of lymphatic tracer with a particle diameter of 150nm. They can enter the lymphatic system and trace the lymph nodes during CLND (13,14). In PTC surgery, injection of CNs into tissues near the tumor can cause the central lymph node drainage to appear black. Thus, this technique can assist surgeons in determining the extent of CLND and prevent suspicious lymph nodes from being missed. Although there are some similar reports about the advantages of CNs used in PTC patients, there has been no related research on the use of CNs in level VII dissections. This study analyzed the effects of CNs used in level VII lymph nodes dissection with PTC patients. We present the following article in accordance with the STROBE reporting checklist (available at https://dx.doi.org/10.21037/gs-21-281). 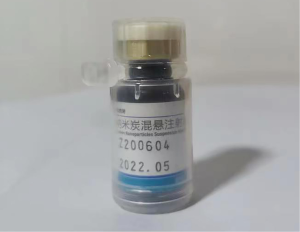 This study investigated the clinical data of patients with PTC who underwent hemithyroidectomy/total thyroidectomy plus CLND in the Department of Thyroid Surgery of Putian University Affiliated Hospital between September 2019 and December 2020. All specimens were confirmed to be PTC by postoperative histopathology. All patients were informed of the methods and risks of the operation and signed informed consents. The patients were randomly divided into two groups. In the CNs group, CNs suspension (1 mL: 50 mg; Lai Mei Pharmaceutical Co, Chongqing, China) were partly injected into the thyroid gland of 103 patients. The remaining 88 patients were designated as the control group. All patients underwent surgery for the first time and were not complicated with malignant tumors of other organs. All patients were examined by thyroid ultrasound, cervical computed tomography (CT), and electronic laryngoscopy. Serum calcium and parathyroid hormone (PTH) levels, as well as thyroid function were assessed before surgery and were followed up for 6 months. Permanent hypoparathyroidism and recurrent laryngeal nerve (RLN) injury were defined if PTH levels and vocal cord movement did not return to normal after 6 months. All procedures performed in this study involving human participants were in accordance with the Declaration of Helsinki (as revised in 2013). This research was approved by the medical ethics committee of the Affiliated Hospital of Putian University.

All patients were treated with general anesthesia and head, back, and neck extension. At two transverse fingers above the superior sternal notch, a collar arc incision (Kocher incision) was made along the direction of the dermatoglyph to cut the skin, subcutaneous tissue, and platysma muscle. The loose connective tissue space of the platysma muscle was separated and the skin flap was freed. The anterior cervical muscle was pulled to both sides to expose the thyroid gland. In the CNs group, CNs (approximately 0.1 mL per point) were injected with a skin test needle at 1–2 points around the thyroid carcinoma. The needle was drawn back before injection to confirm that it did not mistakenly enter a blood vessel. The injection site was pressed with gauze immediately after injection to prevent liquid leakage from polluting the operation field. Ten minutes after injection, hemithyroidectomy/total thyroidectomy plus CLND was performed after central lymph nodes were stained black. The procedure in the control group was identical to that in the CNs group, but injection of CNs was omitted. During the operation, care was taken to protect the RLN and inferior PGs. After dissection, the lymph nodes in the central area were sent for pathological examination separately according to level VI and level VII.

The SPSS 25 software package was used for statistical analysis. Normally distributed data were presented as mean ± standard deviation and the t-test was used to compare the difference between two groups. Measurement data that were not normally distributed were presented as the median (M) and interquartile range (Q1, Q3), and the Mann-Whitney U test was used for comparison between groups. The χ2 test was used to compare the counting data. A P value <0.05 was considered statistically significant. 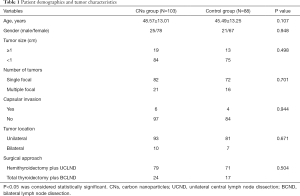 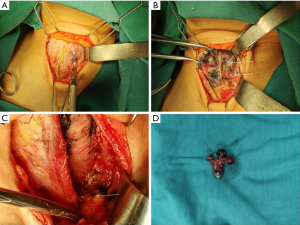 Table 4 summarizes the comparison of common postoperative complications between the two groups. In the CNs group, hypoparathyroidism occurred in 8 cases (7.41%) as demonstrated by PTH values that were lower than the normal values (0.34–5.6 µIU/mL). Patients in the CNs group also experienced symptoms such as numbness around the mouth and extremities. These clinical symptoms were relieved after intravenous injection of calcium gluconate. Postoperative hypoparathyroidism occurred in 17 cases (19.32%) in the control group, which was significantly higher than the number of cases in the CNs group (P=0.018). Again, treatment with calcium gluconate alleviated the symptoms. During the follow-up within 6 months after the operation, the PTH levels of all patients returned to normal, and no permanent hypoparathyroidism was observed.

There was 1 case of RLN injury in the CNs group (0.97%) and 3 cases in the control group (3.41%). The difference was not statistically significant (P=0.505). Patients with RLN injury exhibited hoarseness and were treated with mecobalamin. All patients were examined by electronic laryngoscopy 6 months after the operation. The movement of vocal cords returned to normal, and no permanent vocal cord paralysis was noted. There were no significant differences in the incidence of other common complications, such as postoperative bleeding and superior laryngeal nerve injury, between the two groups (P>0.05). None of the patients experienced dyspnea, bilateral RLN injury, chylous fistula, nor pneumonia. The patients were followed up for 6 months, and no recurrence, metastasis, nor death was observed.

Intraoperative blood loss, operation duration, postoperative drainage duration, and hospitalization days were comparable between the two groups with no statistically significant differences (P>0.05). However, the whole hospitalization cost of the CNs group was significantly higher compared to the control group (P<0.001; Table 5).

In recent years, various types of lymph node tracers have been developed to recognize the characteristics of level VII lymph nodes, including indocyanine green, methylene blue, and India ink (15). CNs are an advanced tracer that can be used in PTC surgeries. These lymphatic tracers have a particle diameter of 150 nm. CNs tend to congregate in the lymphatic system and do not enter blood vessels. Due to lymphoid aggregation, CNs have been useful for the detection of level VII lymph nodes and facilitate thorough clearing of lymph nodes in the central area.

In this current study, the number of level VII lymph nodes detected in the CNs group was significantly higher compared to the control group, but the rate of lymph node metastases was not significantly different between the two groups. These results suggested that CNs can be used to effectively increase the detection rate of lymph nodes during surgery and contribute to a more thorough dissection of cervical lymph nodes, especially lymph nodes that cannot be detected by ultrasound. The increased rate of lymph node detection could be explained by several reasons. First, some micro-lymph nodes with a diameter less than 5 mm can be found in level VII (16). However, due to their small volume, these lymph nodes are often missed by surgeons. CNs have a good tracer effect and can help identify and remove these micro-lymph nodes. Second, CNs can also indicate the drainage direction of lymphatic vessels in the tissue, which can assist surgeons expand the scope of the surgical dissection during the operation. Third, the tracing effect of CNs make it easier and more accurate for pathologists to obtain lymph node specimens during the operation and reduce the influence of human factors on the number of lymph nodes. Therefore, in patients with PTC, the use of CNs can reduce the omission of lymph nodes in the central area, help to reduce the local recurrence rate after operation, provide more accurate clinical staging, and reduce the amount of postoperative radioactive iodine ablation.

Hypoparathyroidism is a common complication of thyroid cancer surgery with a reported incidence of 6.9–46.5% (23,24). In the presence of PG anatomical variation and when PGs are mixed with the surrounding lymphoid node and adipose tissue, the PGs may be mistaken for lymph nodes and be resected during CLND. Conversely, it is also possible that lymph nodes are mistaken as PGs, thus resulting in incomplete dissection. In addition, after CLND, the disturbance of the blood supply to PGs is the primary cause of postoperative hypoparathyroidism. Unfortunately, chemical and physical methods or biological dyes that can label PGs during operations are currently not available. With the application of CNs, the thyroid glands and its surrounding lymph nodes are stained black, but no black staining is found in PGs or the RLN, thus achieving a negative parathyroid staining effect. This is helpful in identifying and protecting PGs during operations (25-27). In this study, the transient hypocalcemia rate observed in the CNs group was significantly reduced compared to that in the control group. After the same calcium supplement treatment, the symptoms alleviated and the blood calcium levels returned to normal. During the 6-month follow-up period, no permanent hypoparathyroidism was observed.

The disadvantage of using CNs is that the whole hospitalization cost is significantly elevated, and this may present an affordability issue for some patients. Unfortunately, the follow-up time in this investigation was too short to effectively examine the ability of CNs to reduce the recurrence rate in level VII in patients with PTC. Future studies with a longer follow-up period are warranted.

The use of CNs for lymph node tracing can significantly increase the dissected number of level VII lymph nodes and help to protect the PGs, thereby achieving a more radical treatment effect. Moreover, the use of CNs does not increase the rate of injury to the RLN nor the rate of other complications which confirmed the safety for patients. CNs are also advantageous as they do not require any special preparation, and provide a effective approach for level VII dissection in patients with PTC.

Funding: This study was supported by the Young and Middle-aged Teachers Education Research Project of Fujian Province (JAT200503).

Reporting Checklist: The authors have completed the STROBE reporting checklist. Available at https://dx.doi.org/10.21037/gs-21-281

Conflicts of Interest: All authors have completed the ICMJE uniform disclosure form (available at https://dx.doi.org/10.21037/gs-21-281). The authors have no conflicts of interest to declare.

Ethical Statement: The authors are accountable for all aspects of the work in ensuring that questions related to the accuracy or integrity of any part of the work are appropriately investigated and resolved. All procedures performed in this study involving human participants were in accordance with the Declaration of Helsinki (as revised in 2013). This research was approved by the medical ethics committee of the Affiliated Hospital of Putian University. All patients were informed of the methods and risks of the operation and signed informed consents.