Thyroid nodules are a widespread medical problem, with a prevalence rate of 19% to 68% in the general population (1,2). Thyroid cancer is one of the fastest-growing endocrine cancers in recent years. Its etiology is complex, and some of its mechanisms may be related to elevated TSH. TSH is a thyroid stimulating hormone. TSH regulates the growth of thyroid follicular cells through a signal transduction pathway mediated by adenylate cyclase (CAMP). Excessive TSH levels are related to the occurrence of thyroid cancer. Specific reasons include iodine deficiency and high-iodine diet, radiation to destroy the thyroid, sex hormones, genetic factors, and other thyroid diseases, nodular goiter, and congenital hyperplastic goiter without adequate treatment for a long time. At present, ultrasound-guided fine needle aspiration (US-FNA) biopsy has been the most accurate method for the diagnosis of thyroid nodules (3). The Bethesda system for reporting thyroid cytopathology has been extensively used worldwide, with each category documenting the risk of malignancy, and providing management advice and recommending repeat FNA for Bethesda III thyroid nodules (4,5). In the Bethesda system, about 15–30% of thyroid nodules are classified as Bethesda III category after FNA (4,6), that is, indeterminate atypia of undetermined significance (AUS) and follicular lesion of undetermined significance (FLUS). The inability to distinguish benign from malignant thyroid nodules is the main limitation of US-FNA for Bethesda III thyroid nodules (3). The probability of malignancy of Bethesda III thyroid nodules is estimated to be 10–30% (7), and the malignant incidence of Bethesda III thyroid nodules is difficult to determine due to only a small portion of these cases being surgically removed. Those who have undergone removal only represent some patients whose clinical, ultrasound, or molecular findings are at risk of malignancy (8).

The treatment of Bethesda III thyroid nodules is different in clinical practice. According to the ultrasonic manifestations, clinical risk factors, and patients’ wishes, the diagnosis and treatment methods include repeat FNA, regular follow-up, gene detection, or diagnostic surgical treatment, amongst others. It is reported that the diagnostic accuracy of Bethesda III thyroid nodules after repeat FNA is 65% (3). Among the molecular markers, BRAF V600E mutation is the most common mutation in papillary thyroid carcinoma (PTC) (9), accounting for 28–83% of all gene mutations and 90% of all BRAF mutations (10-12). However, BRAF V600E mutations were not detected in normal thyroid tissues or benign lesions (13-16). Therefore, when the cell pathological diagnosis of the initial FNA is Bethesda III category, the thyroid nodule is too small or the cell mass is insufficient for diagnosis, repeated FNA combined with BRAF V600E can help confirm the diagnosis of malignant thyroid nodules.

We present the following article in accordance with the STARD reporting checklist (available at https://dx.doi.org/10.21037/gs-21-302).

All procedures performed in this study involving human participants were in accordance with the Declaration of Helsinki (as revised in 2013). The study was approved by institutional ethics board of Hebei General Hospital (NO.12). From January 1, 2017 to December 31, 2020, a total of 1,114 thyroid nodules were included. A process diagram of patient screening is shown in Figure 1. The inclusion criteria included preoperative FNA, puncture feeling records, and BRAF V600E mutation testing in Bethesda III thyroid nodules during repeat FNA. Patients who did not meet the above criteria were excluded from the study. Prior to FNA, all patients signed informed consent for special treatment. Repeat FNA was recommended for Bethesda III thyroid nodules after 3 months, and the operator informed the patients of the significance and related cost of the BRAF V600E test before repeat FNA, all of which were tested with the consent of the patient. Repeat FNA was performed by another experienced operator. 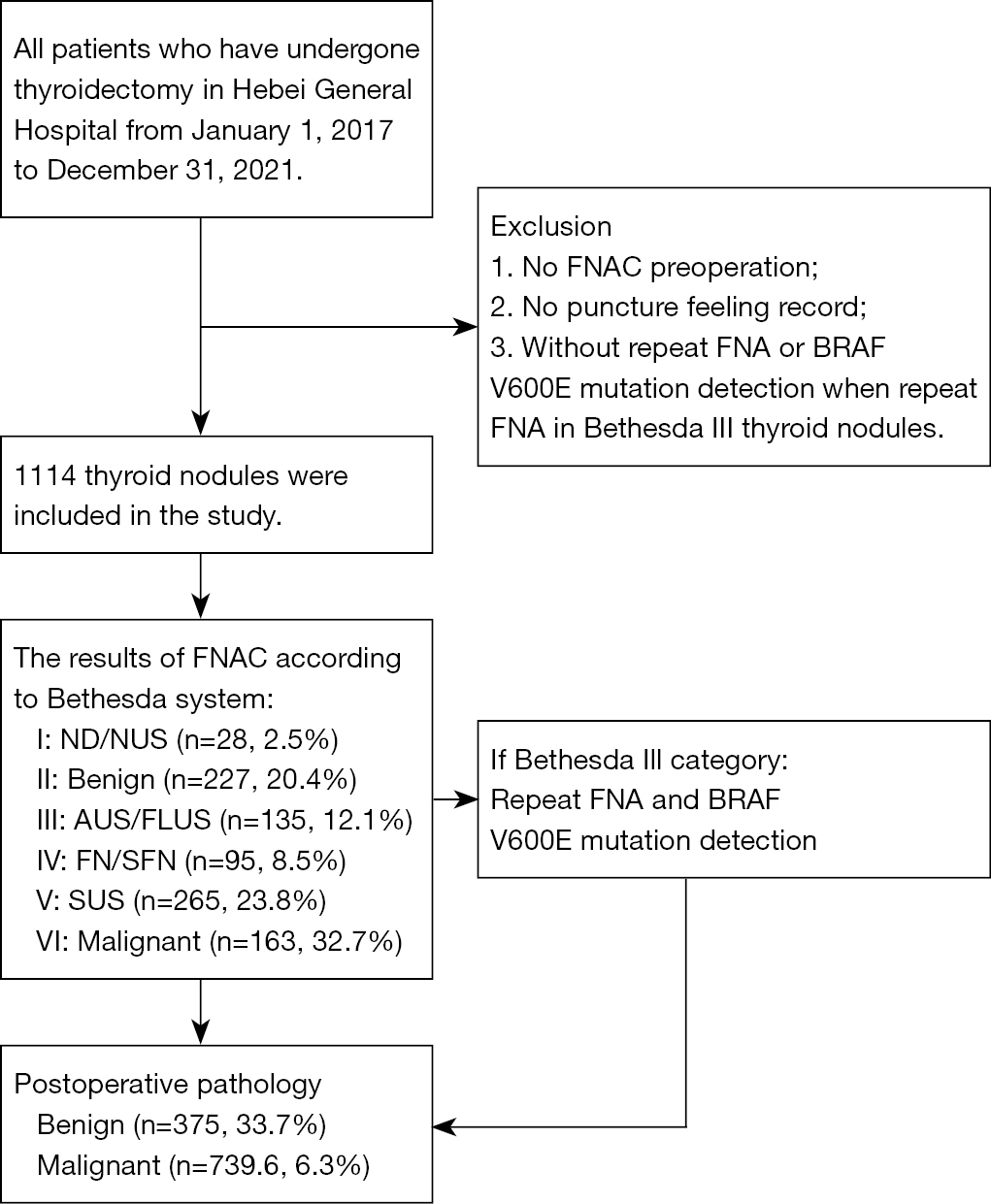 The operation process of US-FNA

The operator used the Philips EPIQ 7 color Doppler ultrasound instrument made by Philips in the United States, with an L12-5 linear array probe and a frequency of 5–12 MHz. The patient was placed in the supine position before the operation, the target nodule was scanned and located by ultrasound, and the puncture path of FNA was chosen. The puncture needle was a 23G or 25G puncture needle from Japanese Hakko Co., Ltd. The surgeon used iodophor for disinfection, aseptic hole towels were spread, and 1 ml 2% lidocaine was used for local infiltration anesthesia. Under the guidance of ultrasound, the operator pierced the puncture needle into the nodule along the puncture path, with rapid sampling and rapid smear fixation. The assistant sent the specimens to the pathology department for cytological diagnosis by a professional pathologist.

SPSS19.0 statistical software was used for statistical analysis. The chi-square test and Fisher’s exact test were used to compare the categorical variables. According to the postoperative pathological results, the receiver operating characteristic (ROC) curve was constructed and the area under the curve (AUC) was calculated. P<0.05 was statistically significant.

Clinicopathological characteristics of the patient 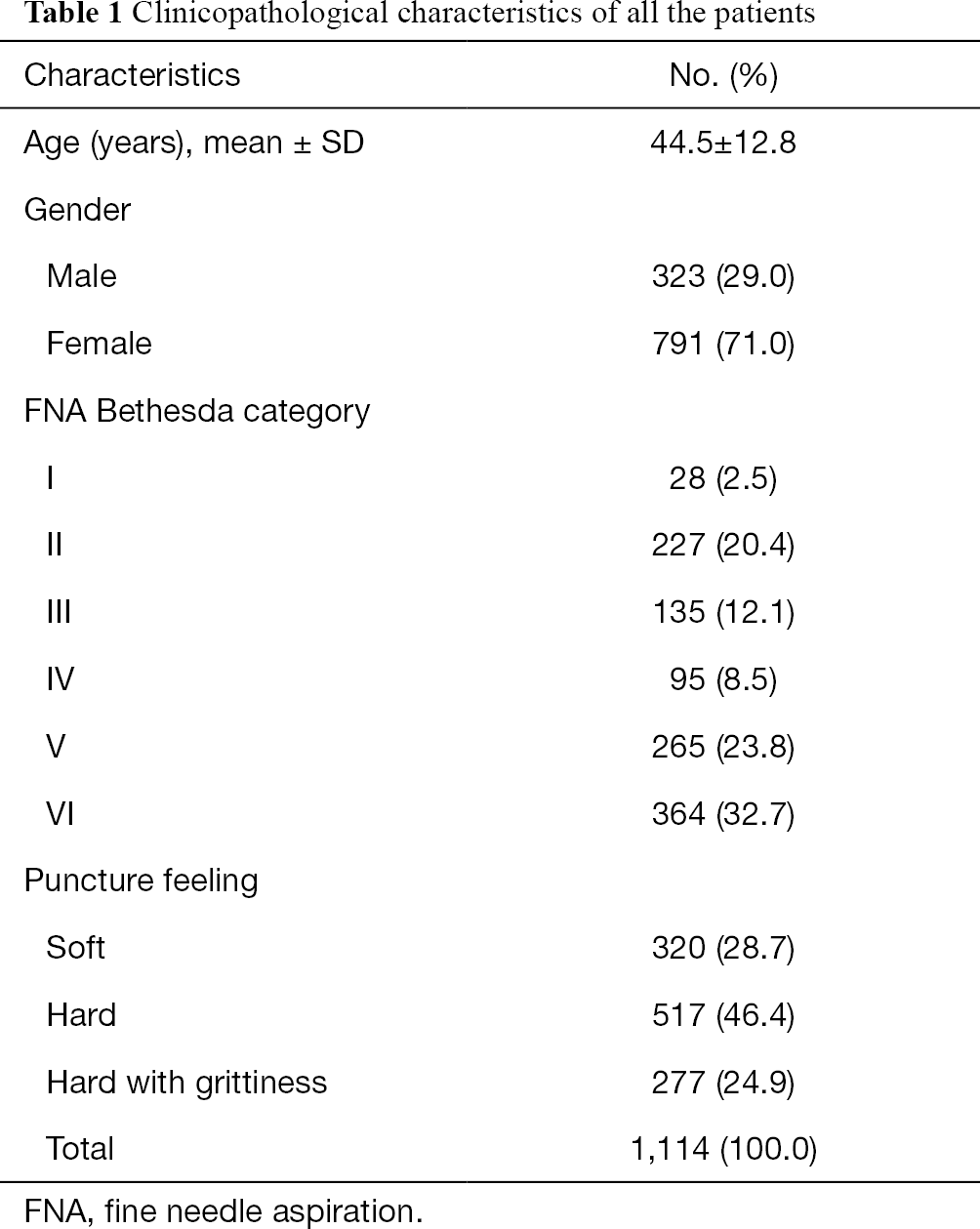 Table 1 Clinicopathological characteristics of all the patients
Full table

Analysis of the consistency of puncture feeling of different operators 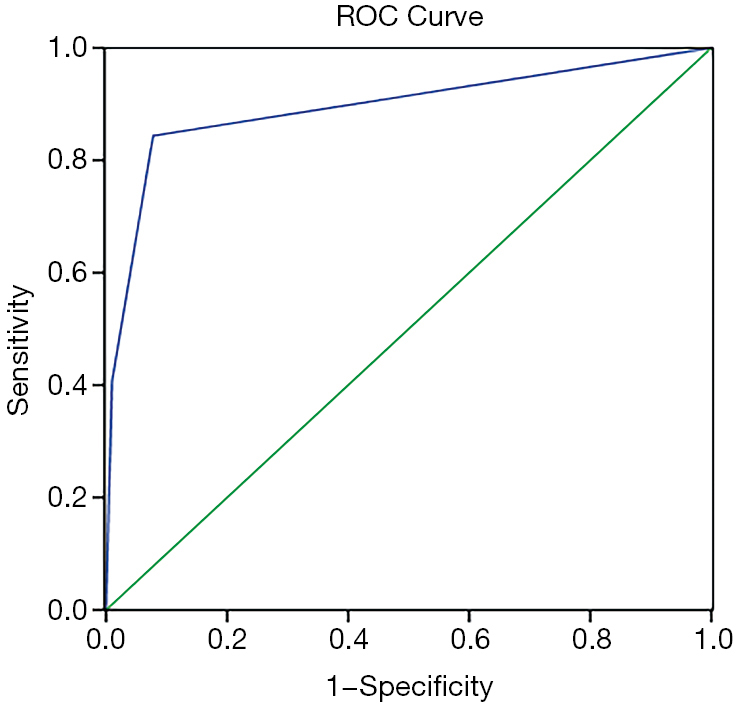 Only a small number of patients in this study had mild pain during puncture, and fewer patients had bleeding complications, but they could stop bleeding after compression.

The results of the correlation analysis between puncture feeling and postoperative pathology of the 1,114 nodules included in this study (Table 2) proved that there was a significant correlation between them (P<0.001). Puncture feelings of hard and hard with grittiness were malignant risk factors, while nodules with soft puncture feeling were more likely to be benign. This is because the puncture feeling is closely related to the pathological structure of thyroid nodules. The most common pathological type of malignant thyroid nodules is PTC. Its cytopathological features are as follows: epithelial cells are arranged in a papillary pattern, and the nucleolus, nuclear sulcus, and nuclear pseudoinclusion bodies can be seen. Compared with normal thyroid tissue, there are very few follicular glia. With the continuous development of the patient’s condition, psammoma bodies can be found in most PTC lesions, which is caused by tissue degeneration and necrosis produced by insufficient cell blood supply, and then calcium salt is produced and deposited. It is precisely because of this that the operator will feel hard when the needle tip enters the nodule, and the puncture feeling of grittiness is caused by the psammoma bodies. The most common benign nodules are nodular goiter and follicular adenoma. Nodular goiter consists of dilated follicles in varying degrees, and the cavity is full of colloids. Follicular adenoma is composed of hyperplastic follicular epithelium, and there are a large number of follicles, most of which are edema-like loose fibrous stroma. Therefore, the needle tip can smoothly enter the interior of benign nodules during FNA, which is soft and has no obvious sense of resistance.

Previous studies have shown that the most common molecular abnormality in thyroid cancer is the BRAF V600E mutation, which is a useful diagnostic marker (21-25). Other studies have shown that BRAFV600E analysis can improve the diagnostic accuracy of FNA and reduce the false negative rate, especially for AUS/FLUS (26). In this paper, the correlation analysis between BRAF V600E mutation and postoperative pathology and puncture feeling in repeat FNA of Bethesda III thyroid nodules in Table 5 showed that 68.8% of malignant nodules had mutations. Compared with the results of the Bethesda III thyroid nodules at the first FNA, BRAF V600E mutation has important guiding significance for the next step of diagnosis and treatment for clinicians. Moreover, most of the mutated nodules had the puncture feeling of hard with grittiness (85.7%) and hard (38.1%). However, the reason for the correlation between BRAF V600E mutation and puncture feeling was not clear. Therefore, when the first FNA results of thyroid nodules are in the Bethesda III category, if the puncture feeling is hard or hard with grittiness, and there are signs of malignancy on the ultrasound image, then the patient should be strongly recommended to perform repeated FNA combined with BRAF V600E mutation detection. The combined diagnosis is helpful for ensuring that patients with malignant nodules undergo surgical resection in time, and to avoid over-treatment in patients with benign nodules.

Puncture feeling is helpful to distinguish the nature of thyroid nodules on the basis of two-dimensional ultrasound. Moreover, puncture feeling has good repeatability among different operators, and can be used as a reliable indicator for evaluating the nature of thyroid nodules. When the puncture feeling is hard or hard with grittiness during the process of FNA, the thyroid nodule has a malignant tendency, while a soft puncture feeling indicates that the nodule is more likely to be benign. Therefore, when the initial FNA result is classified as Bethesda III category, if there is still a malignant risk in the combination of ultrasound images with puncture feeling of hard or hard with grittiness, repeat FNA and detection of BRAF V600E mutation should be carried out. This can provide a reliable basis for surgeons to devise treatment strategies, avoid excessive diagnosis and treatment, and reduce the economic burden of patients.

However, this study has some limitations. There was an insufficient number of Bethesda III thyroid nodules and thyroid nodules with BRAF V600E mutations. In the follow-up study, with the increase in the number of patients, we will conduct further analyses and research to increase the reliability of the study.

Reporting Checklist: The authors have completed the STARD reporting checklist. Available at https://dx.doi.org/10.21037/gs-21-302

Conflicts of Interest: All authors have completed the ICMJE uniform disclosure form (available at https://dx.doi.org/10.21037/gs-21-302). The authors have no conflicts of interest to declare.

Data Availability: Our data can be shared publicly by the mailbox of the correspondent author. However, in order to prevent the disclosure of the original confidential data, our organization allows us to upload the original data only after the article is accepted.

Ethical Statement: The authors are accountable for all aspects of the work in ensuring that questions related to the accuracy or integrity of any part of the work are appropriately investigated and resolved. All procedures performed in this study involving human participants were in accordance with the Declaration of Helsinki (as revised in 2013). The study was approved by institutional ethics board of Hebei General Hospital (NO.12). Prior to FNA, all patients signed informed consent for special treatment.