Breast cancer is the leading cause of all tumor-associated deaths in women worldwide as well as in China nationwide. Around 5–30% of the patients came with locally advanced disease (1,2), which is not immediately operable and calls for presurgical systematic treatment known as neoadjuvant therapy (NAT). In addition to increasing the chances of effective surgery, NAT provides valuable information about the patient’s response to the current therapy, which could guide further clinical decisions. The response to NAT is measured as pathological complete response (pCR), defined as no residual tumor cells in the surgical specimen by pathological assessment (3). Achievement of pCR indicates sensitivity to the current treatment and a better prognosis, while other patients might need to switch to an alternative treatment after surgery (4,5). pCR is also considered a surrogate for survival and accelerated drug approval (6). Thus, it is important to identify biomarkers to predict pCR early to improve the effect and efficiency of NAT.

Long noncoding RNAs (lncRNAs) are a type of non-protein-coding RNA transcript with a length of more than 200 bp. Although lncRNAs do not encode proteins directly, they can still participate and function in various kinds of biological pathways, such as genetic imprinting, epigenetic modification, chromatin conformation, cell cycle regulation, stem cell differentiation, and the regulation of enzyme activity in a cis- or trans-manner (7,8). In recent years, studies have found that lncRNAs also play a crucial role in oncogenesis (9). The expression of lncRNAs in tumors is tissue-specific, and they can act as oncogenes or tumor suppressor genes at the transcriptional and/or posttranscriptional levels, thereby affecting tumor cell proliferation, apoptosis, angiogenesis, invasion and metastasis (9,10). Therefore, lncRNAs can be used as important molecular biomarkers for tumor diagnosis and prediction (11).

LncRNA LOC100505851 is located on chr19p12. It was first identified by the Mammalian Gene Collection Program Team in 2002 when they analyzed more than 15,000 full-length human and mouse cDNA sequences; just one year later, Toshio Ota and his colleagues reported the existence of this unique lncRNA after they had sequenced and characterized 21,243 full-length human cDNAs (12,13). LOC100505851 is the antisense transcript of zinc finger protein 726 (ZNF 726). ZNFs belong to one of the largest known transcript families and are characterized by their unique zinc finger structure (14). ZNF 726 was postulated to be a tumor suppressor gene in colorectal cancer (CRC) due to its downregulation in tumor tissue and its positive correlation with overall survival (OS) (15).

Currently, the function of lncRNA LOC100505851 in breast cancer is unknown. To explore and clarify the expression of this novel lncRNA and its clinical significance, we conducted this retrospective study using data from prospective neoadjuvant clinical trials in breast cancer and preliminarily explored its underlying mechanisms.

We present the following article in accordance with the MDAR reporting checklist (available at https://dx.doi.org/10.21037/gs-21-3).

A total of 209 patients with adequate and qualified tissue samples for the detection of lncRNA LOC100505851 expression were enrolled. Of which 106 patients receiving surgery (without NAT) at Renji Hospital from March 1, 2014 to December 31, 2015, provided with both adjacent and cancer tissue, were enrolled for correlational analysis. Another 103 patients enrolled between June 1, 2014 and October 31, 2018 in two prospective neoadjuvant clinical trials [registered in the ClinicalTrials. gov website as SHPD001 (ClinicalTrials.gov identifier: NCT02199418) and SHPD002 (ClinicalTrials.gov identifier: NCT02221999)] were collected for both correlation and pCR analysis, providing only cancer tissue. Details of the neoadjuvant treatment protocols have been reported previously (16). The study protocols were approved by the ethics committee of Renji Hospital (IRB approval No. 2014-14K and 2017-088). All procedures performed in this study involving human participants were in accordance with the Declaration of Helsinki (as revised in 2013). And written informed consent of donating biospecimen for scientific researchers were obtained from all the study participants.

Human breast cancer cell line ZR7530 was obtained from the Cell Bank of the Chinese Academy of Sciences (Shanghai, China). Cell lines were maintained in McCoy’s 5A and Leibovitz’s L-15 medium (BasalMedia, Shanghai, China). All media were supplemented with 10% fetal bovine serum (Gibco, Waltham, MA, USA) and 1% penicillin-streptomycin (BasalMedia, Shanghai, China). Nuclear and cytoplasmic RNA extractions were carried out in the ZR7530 cell lines. The cytoplasm expressed 18s rRNA and the nuclear expressed U6 were used as controls. The experimental procedure was carried out according to the relevant instructions of the NE-PER Nuclear and Cytoplasmic Extraction Reagents kit (Thermo Scientific, USA).

The RNA-binding proteins (RBPs) were predicted from starBase (http://starbase.sysu.edu.cn/) and subsequently used to perform PPI network by STRING (https://string-db.org/).

The expression of LOC100505851 was calculated as log (lncRNA LOC100505851). Chi-Square test was used to analyze the difference of LOC100505851 expression in cancer and adjacent tissues and the relationship with various clinical pathological characteristics. High LOC100505851 expression was defined as the highest quartile of the expression data set, which was its relative expression ≥0.00186 (pCR analysis set)/0.00205 (correlational analysis set). The associations between all the baseline clinicopathological characteristics [age, tumor (T) stage, nodal (N) stage, estrogen receptor (ER) status, progesterone receptor (PR) status, human epidermal growth factor receptor 2 (HER2) status, Ki-67 index, and molecular subtype based on immunohistochemistry according to St. Gallen Consensus (17) (luminal A-like (ER or PR positive, HER2 negative, Ki-67 <20%) versus luminal B-like (ER or PR positive; HER2 negative, and Ki-67 index ≥20% or HER2 positive and any Ki-67 index) versus HER2 overexpression (HER2 positive, ER and PR negative) versus basal-like (ER and PR negative, HER2 negative)] and lncRNA LOC100505851 expression levels (high versus low) were calculated using the chi-squared test. Gene Expression Profiling Interactive Analysis (GEPIA) online database was used to validate LOC100505851 expression in tumor and normal tissue, as well as its correlation with HER2 expression. pCR was defined as the absence of invasive cancer in the breast and no residual cancer cells in lymph node samples obtained at the time of surgery. Univariate and multivariate logistic regression models were used to evaluate the associations between LOC100505851 expression levels (high versus low) and pCR (adjusted for age, T stage, N stage, ER status, PR status, HER2 status, Ki-67 index). 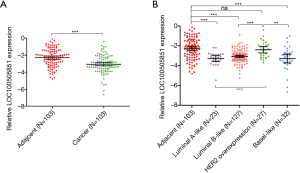 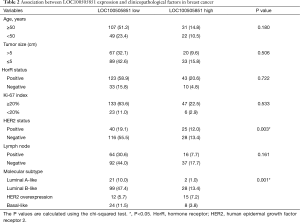 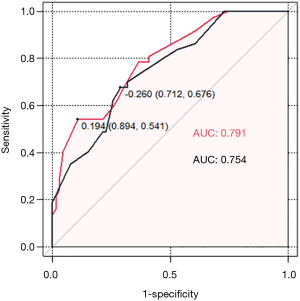 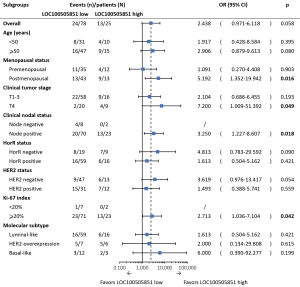 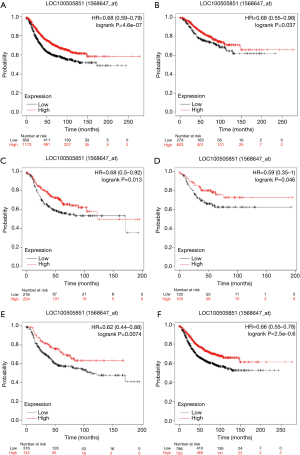 To explore the potential function of LOC100505851, we first determined the subcellular location of LOC100505851. Most of the lncRNA LOC100505851 was located in the nucleus (Figure 5). We further predicted the RBPs and performed subsequent PPI network analyses (Figure 6). We assumed that these RBPs could function by sticking to the scaffold of LOC100505851 and activating multiple signaling pathways. 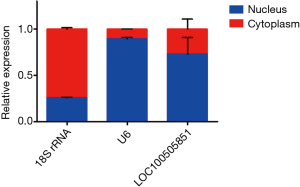 Figure 5 Subcellular localization of LOC100505851. The cytoplasm expressed 18s rRNA and the nuclear expressed U6 were used as controls. 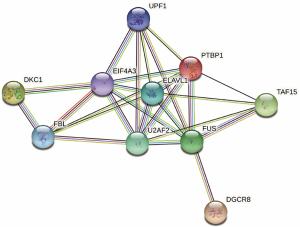 Consistent with the RFS and OS results, LOC100505851 expression was also associated with a greater probability of pCR in the overall patient group, suggesting its potential role as a biomarker in clinical scenarios. More intriguingly, LOC100505851 was associated with HER2 expression (which was validated in the GEPIA database, Figure S3), and furthermore, in both HER2-positive and negative patients, LOC100505851 was associated with a better RFS (Figure 4D) and OS (Figure S1D). Whether this phenomenon was related to drug delivery or clearance in different patients or interactions between the HER2 signaling pathway and LOC100505851 RBPs predicted in Figure 6 awaited further study.

Our work preliminarily revealed the role of LOC100505851 in breast cancer without researching the molecular mechanisms, which was clearly the major limitation of this study. Further study of how LOC100505851 exerts its antitumor function and how it facilitates chemosensitivity is needed.

In conclusion, lncRNA LOC100505851 was significantly expressed at lower levels in breast cancer tissues than in adjacent tissues. Its expression was related to a higher pCR rate, better RFS and better OS, indicating its potential value as a novel positive predictive and prognostic biomarker in breast cancer; however, the mechanism of its function remains to be further explored.

Reporting Checklist: The authors have completed the MDAR reporting checklist. Available at https://dx.doi.org/10.21037/gs-21-3

Conflicts of Interest: All authors have completed the ICMJE uniform disclosure form (available at https://dx.doi.org/10.21037/gs-21-3). The authors have no conflicts of interest to declare.

Ethical Statement: The authors are accountable for all aspects of the work in ensuring that questions related to the accuracy or integrity of any part of the work are appropriately investigated and resolved. The study protocols were approved by the ethics committee of Renji Hospital (IRB approval No. 2014-14K and 2017-088). All participants involved in this study provided written informed consents of donating biospecimen for scientific researches. All procedures performed in this study involving human participants were in accordance with the Declaration of Helsinki (as revised in 2013).