In recent years, thyroid carcinoma has exhibited the rapidest increase in incidence among solid tumours in China. Papillary thyroid carcinoma (PTC) is the most common pathological type of thyroid cancer (1). PTC has a good prognosis despite approximately 30% to 80% of patients having cervical lymph node metastasis at the time of diagnosis (2). Therefore, most guidelines for preoperative or intraoperative examination of the central lymph node positive recommend central lymph node dissection (CLND) (3). However, the lack of a uniform surgical approach may lead to postoperative PTC relapse, which requires additional surgery. Furthermore, reoperation may increase the difficulty of the surgical procedure and the risks of permanent hypoparathyroidism and recurrent laryngeal nerve (RLN) injury (4). Therefore, it is very important to emphasize standard and thorough CLND.

Although the American Thyroid Association (ATA) guidelines outline the anatomical boundaries of CLND in thyroid cancer, the guidelines only define the width of the central compartment and not the depth of the central compartment (5). Whether the lymph node posterior to the right recurrent laryngeal nerve (LN-prRLN) should be dissected is still controversial. On the one hand, some researchers suggest that there is no need for routine LN-prRLN dissection because of the low LN-prRLN metastasis rate, the complex surgical approach and the high complication rate. On the other hand, some scholars have pointed out that the LN-prRLN metastasis rate in PTC patients is as high as 2.74–38.27% (6,7). Incomplete resection of the LN-prRLN in the first surgery can make the residual lymph nodes difficult to excise in the second surgery and even render complete excision impossible. Therefore, we conducted a meta-analysis to investigate the risk factors related to LN-prRLN metastasis and provide reliable evidence‐based support for LN-prRLN dissection.

We present the following article in accordance with the PRISMA reporting checklist (available at https://dx.doi.org/10.21037/gs-21-177).

The inclusion criteria were as follows: (I) PTC was confirmed via a pathological examination; (II) the neoplastic lesions were located in the right or bilateral glands of the thyroid gland without isthmic lesions; (III) patients receiving at least right central lymph node dissection (including LN-prRLN dissection); and (IV) the included studies were prospective or retrospective. The exclusion criteria were as follows: (I) comments, case series, overviews and conference abstracts; (II) repeated publications.

Review Manager software (RevMan version 5.3) was used to generate forest plots. This study included binary data, which were analysed by the OR value and 95% CI. The Q test and the I2 value were used to analyse the heterogeneity of the studies. When P<0.10 or I2>50%, the random effects model was adopted; otherwise, the fixed effects model was used for data analysis. Stata software (version 14.1) was used to perform the Begg test and generate a funnel chart to assess publication bias. P>0.10 indicated no publication bias.

A total of 236 articles were retrieved. After reading the titles and abstracts, we excluded articles that were not in accordance with the inclusion criteria, and 36 articles remained. Then, we screened the full texts, and 14 articles were ultimately included in this study (4,6,7,9-19) (Table 1). The flowchart of article screening is shown in Figure 1. The above 14 articles were included in this study, and the Begg test and funnel charts were used to assess publication bias. The funnel chart shows that there was no publication bias in this meta-analysis (P=0.788, Figure 2). 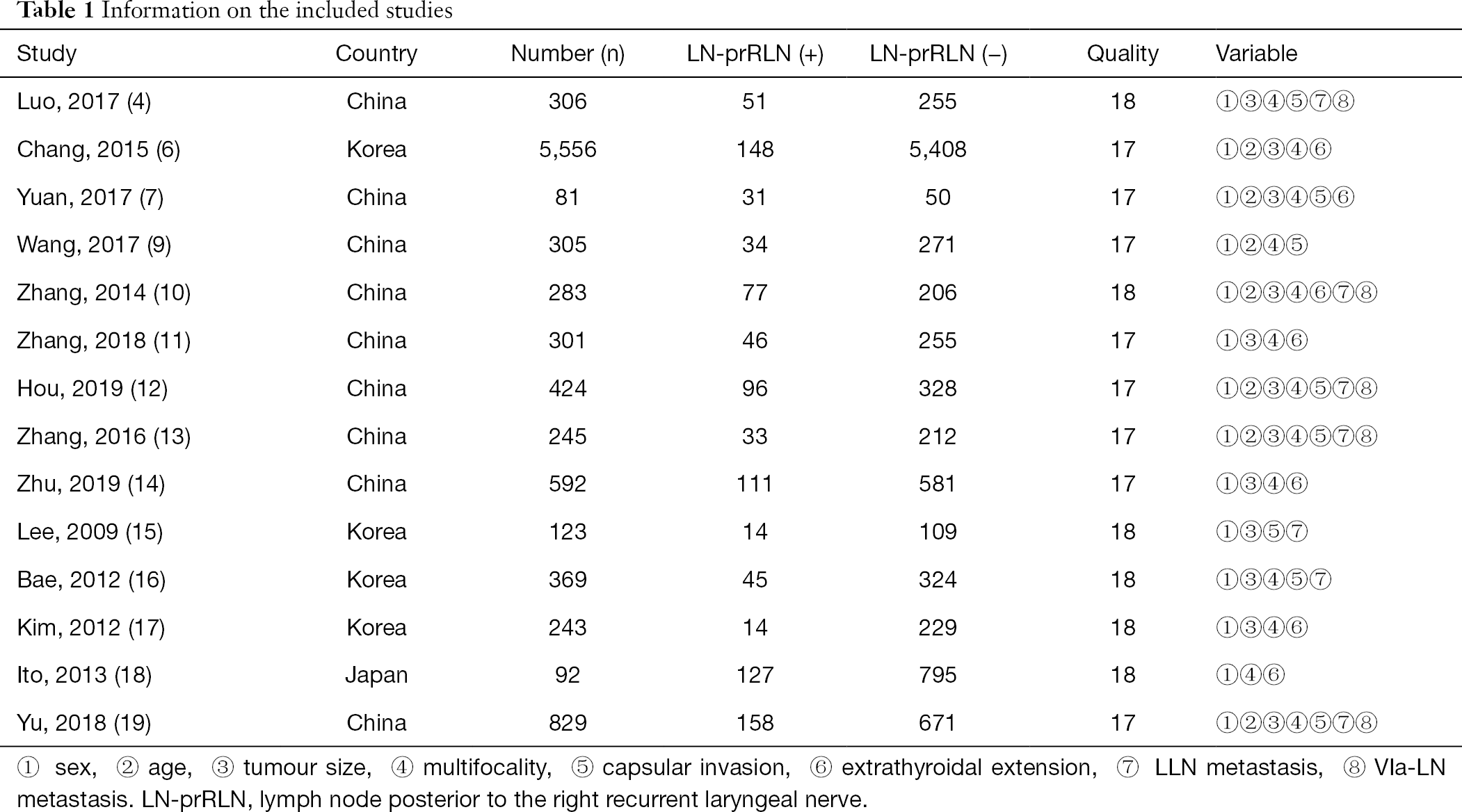 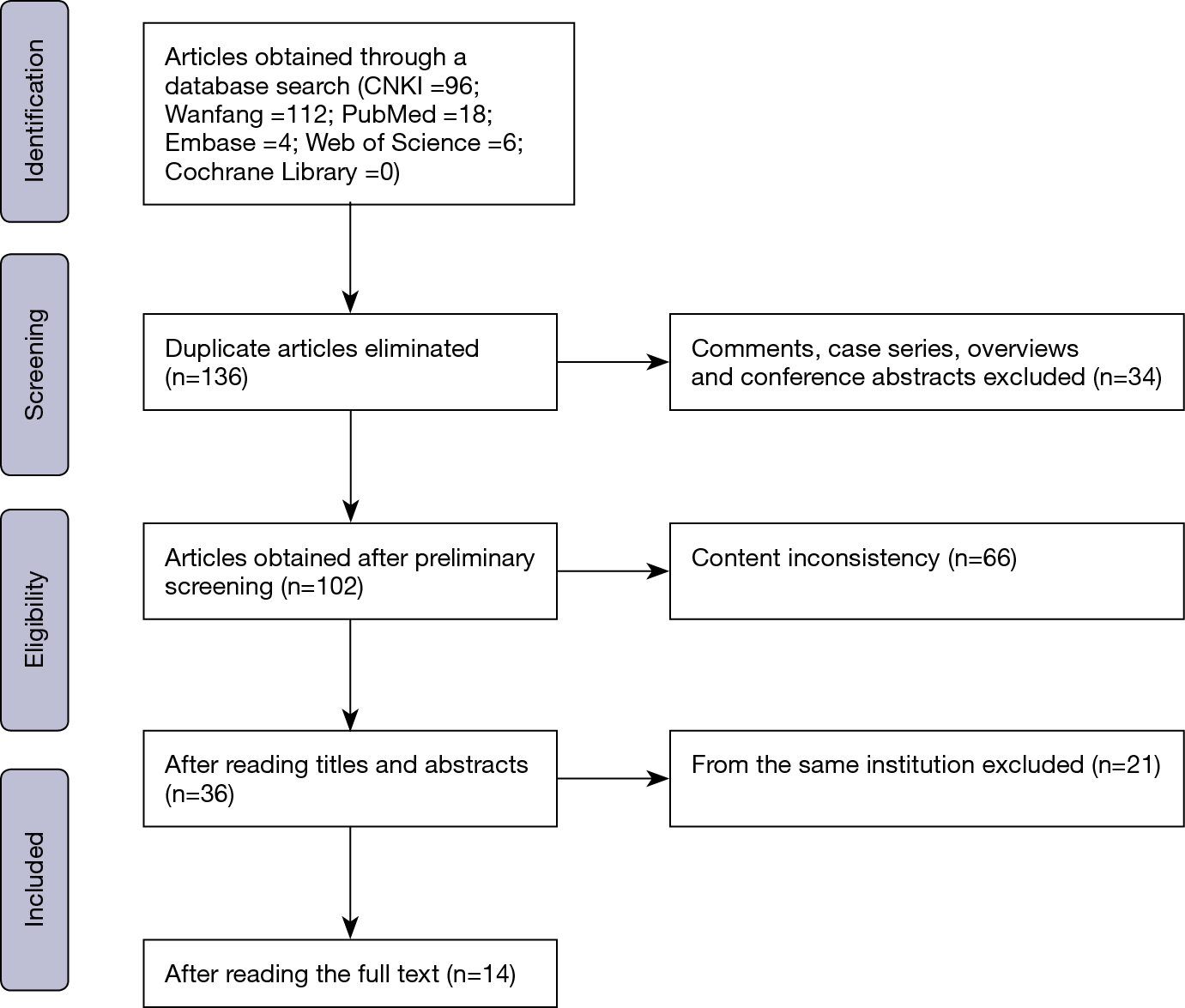 Figure 1 The flowchart of article screening. Figure 2 The funnel chart of risk of bias.

Characteristics of the included studies

All of the included 14 articles, with publication dates ranging from 2009 to 2019, were based on nonrandomized studies. Basic information of 14 cohorts from these studies, giving a total of 10,580 cases, was included in the analysis. The LN-prRLN metastasis rate was 9.22% (975/10,580). Detailed information of each study is provided in Table 1. The MINORS criteria (Table 2) were applied to all 14 studies.

Table 2 The MINORS score of each study
Full table 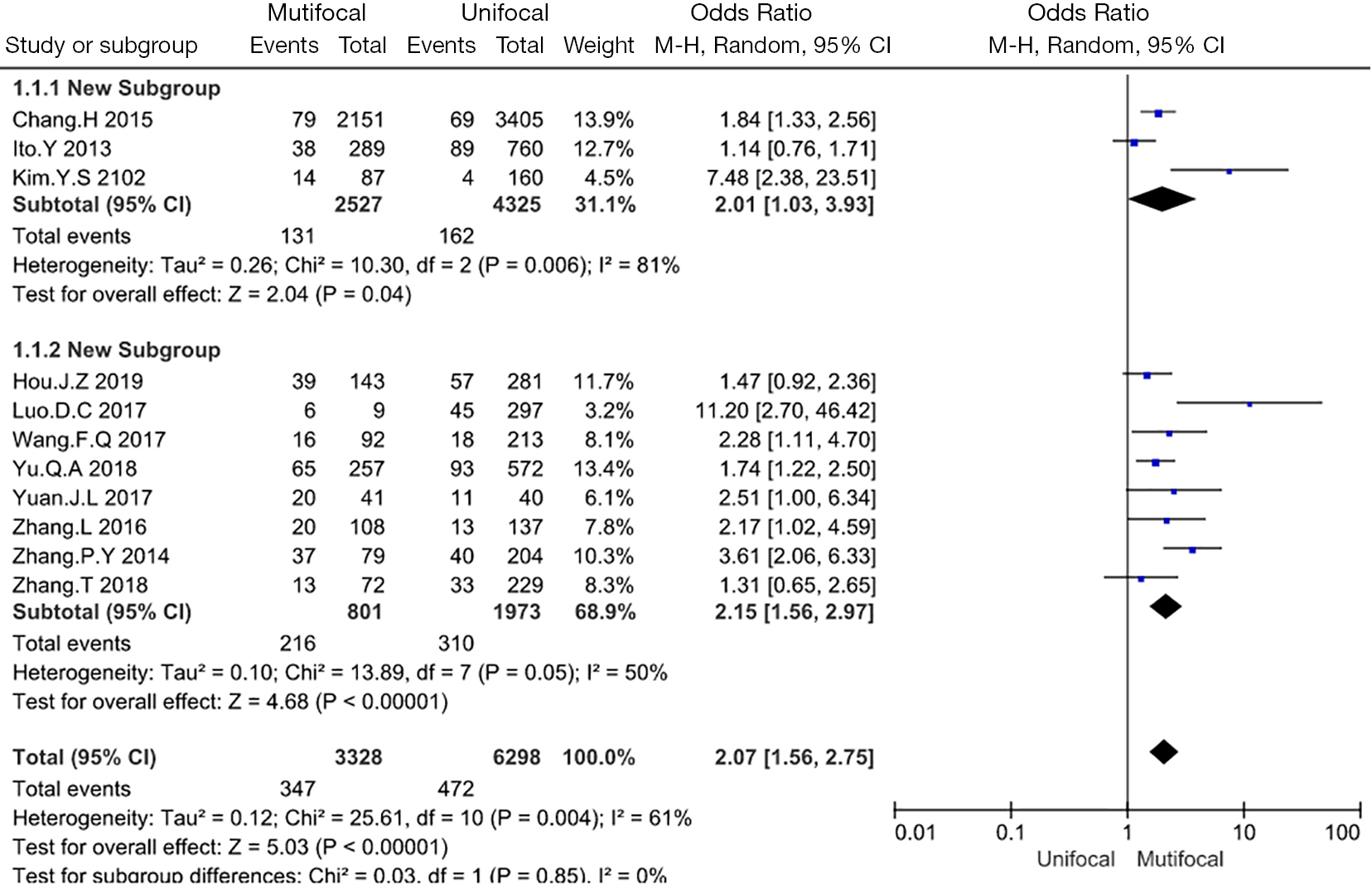 The relationship between demographic factors and LN-prRLN metastasis remains controversial. Among the 14 studies included in this study, those by Wang et al. and Kim et al. suggested that male patients were more likely to develop LN-prRLN metastasis than female patients (9,17). After the data were combined, the results of the meta-analysis showed that sex and LN-prRLN metastasis were correlated; this correlation was likely related to the increased sample size. The 8th edition of the AJCC guidelines raised the age stratification to 55 years, but most of the studies included used 45 years as the classification standard. Patients aged ≤45 years were more likely to develop LN-prRLN metastasis than those aged >45 years, which is consistent with the results of the studies by two scholars, including Zhang et al. (11,12). In our study, the OR value of demographic factor is smallest, but its 95% confidence interval is short, which indicates the result has a certain accuracy. Therefore, sex and age are risk factors that affect LN-prRLN metastasis.

In fact, thyroid capsular invasion and extrathyroidal extension are two forms that describe the extent to which the tumour invades surrounding tissues. When PTC invades the capsule or extrathyroidal organs, it often increases the risk of LN-prRLN metastasis. According to previous reports, the ten-year survival rate of patients decreases from 99.3% to 63%, if the tumour invades or breaks through the capsule (22). Succinctly, LN-prRLN dissection should be performed to reduce the risk of incomplete surgical resection if there is a visible representation of capsular invasion or extrathyroidal extension (23).

Apart from the above mentioned indicators, some studies have described the use of B ultrasound and computed tomography (CT) scans to evaluate the status of LN-prRLN metastasis. Zhang et al. reported that a CT value exceeding 72 hu often indicates the presence of lymph node metastasis (11). In addition, the effect of B ultrasound in assessing LN-prRLN metastasis is conservative. According to a study by Qu et al., the sensitivity and specificity of ultrasound are 11.1% and 95.8% (11). Only two studies proposed imaging indicators to assess LN-prRLN metastasis, so they were not included in this study. In addition, more data are needed to prove this hypothesis.

This is a meta-analysis with the largest sample size so far, but there are still some limitations. (I) Risk factors including tumor size, extrathyroidal extension, and central LN metastasis have been shown to correlate with LN-prRLN metastasis in previous studies. And we expect to find more correlations between LN-prRLN metastasis and risk factors such as imaging omics. (II) More prospective studies are expected to be included to improve the credibility of the meta-analysis.

The authors thank SNAS for the help in language editing.

Funding: The Project of Medical Scientific and Technology Program in Hangzhou (grant number A20200432); Science Research Program of Hangzhou (20180533B39).

Reporting Checklist: The authors have completed the PRISMA reporting checklist. Available at https://dx.doi.org/10.21037/gs-21-177

Conflicts of Interest: All authors have completed the ICMJE uniform disclosure form (available at https://dx.doi.org/10.21037/gs-21-177). The authors have no conflicts of interest to declare.