Breast cancer is the most common malignant cancer in women all over the world (1), and triple negative breast cancer (TNBC) are highly aggressive with poorer survival rate, in which the expression of estrogen receptor, progesterone receptor and human epidermal growth factor receptor 2 are negative (2). The lack of specific treatment targets makes it difficult to cure TNBC (2), so it is necessary to seek for potential therapeutic targets in TNBC.

KIF23 is a member of kinesin family, recent researches indicate KIF23 plays an important role in the proliferation and migration of malignant cancer cells. KIF23 could promote gastric cancer by stimulating cell proliferation (3) and activate Wnt/β-catenin signaling pathway interacting with Amer1 (4). In lung cancer, KIF23 is overexpressed and identified as an independent prognostic factor (5,6). While knockdown of KIF23 could inhibit the proliferation of pancreatic ductal adenocarcinoma cells (7). In ovarian cancer, KIF23 is identified as a prognostic signature (8). KIF23 is also overexpressed in breast cancer (9), and high expression of KIF23 is significantly correlated with poor overall survival (10). While the function and specific molecule mechanism of KIF23 in TNBC remains unclear.

It is well known that microRNA could combine with target mRNA thus causing mRNA degradation, recent researches reveal that miR-424-5p and miR-503-5p could directly targeted to 3'UTR of KIF23 in ovarian cancer (11) and human glioma (12). Similarly, in prostate cancer, KIF23 is targeted by miR-15a-5p (13). While, miRNAs that target KIF23 mRNA in TNBC is still unknown.

We present the following article in accordance with the MDAR reporting checklist (available at https://dx.doi.org/10.21037/gs-21-19).

30 cases of TNBC tissues and paired paracancer tissues were collected from the Department of Breast and Thyroid Surgery of Shanghai Tenth People’s Hospital The study was conducted in accordance with the Declaration of Helsinki (as revised in 2013). The study was approved by ethics board of Shanghai Tenth People’s Hospital (NO. 2020-KN174-01). All patients were contacted by telephone to obtain verbal informed consent. Tissues applied to qPCR were cryopreserved in liquid nitrogen following tissue samples separated from breast cancer tissues without influencing pathologic diagnosis. On condition that cancer tissues were diagnosed as TNBC, tissues were included in this research. Specimens used for immunohistochemistry were gathered from the Department of Pathology of Shanghai Tenth People’s Hospital.

Tissues applied to immunohistochemistry were stored in formalin then embedded with paraffin. Firstly, deparaffinizing and rehydrating the paraffin section, then retrieving tissue antigen with citric acid (pH 6.0). Secondly, blocking endogenous peroxidase activity with 3% hydrogen peroxide and sealing with 3% BSA. Thirdly, primary antibody and secondary antibody were applied in turn for incubation. After diaminobenzidine (DAB) chromogenic reaction, nucleus counterstaining, dehydration and mounting, illustrative images were gathered under a microscope.

For colony formation assay, transfected MDA-MB-231 and BT549 cells were plated in 6-well plates at a density of 500 cells per well, and cells were incubated for 7–14 days at 37 °C with 5% CO2, medium was changed every 3 days. Following observation of clones with naked eyes, medium were removed and cells were washed with phosphate buffer saline (PBS, Servicebio, G4202-500ML, China) for three times and fixed with 95% ethanol for 10 minutes and removed, finally clones were stained with 0.1% crystal violet (YEASEN, 60506ES60, China).

MDA-MB-231 and BT549 cells were seeded in 6-well plates at a density of 50–60% for the first day, 20 hours later, transfected cells with KIF23-siRNA or negative control, incubated cells with complete medium at 37 °C with 5% CO2, scratch was made using pipette tips when cell density reached 90–95%, washed cells with PBS and incubated cells with DMEM/ RPMI-1640 medium supplemented with 2% FBS. Recorded the wound healing with light microscope at 0 h, 24 h and 48 h after scratching. Wound Closure % = [(A0 − At)/A0] ×100% (A0 is the area of the wound measured immediately after scratching, At is the area of the wound measured t hours after the scratch is made).

To explore the change of migration ability after KIF23 knockdown in MDA-MB-231 and BT549, 5×104 transfected cells were plated in upper chamber of transwell (Corning, 3422, USA) incubated with serum free medium, and medium supplemented with 10% FBS was added to the lower chamber, 18 hours later, cells moved to lower chamber of transwell were fixed by 4% paraformaldehyde and stained with 0.05% crystal violet. Representative images were collected under light microscope.

Data was presented as mean ± standard deviation (SD) and analyzed by SPSS 22.0 or GraphPad Prism 9.0. One-way ANOVAs, Student’s t-test or χ2 test were applied to compare difference between groups. P values <0.05 was considered as significantly different. 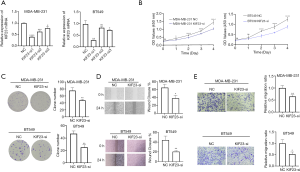 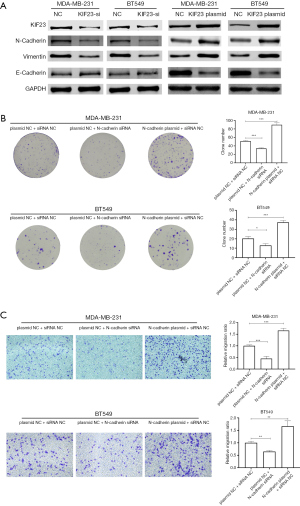 MicroRNAs are kind of non-coding RNAs which mainly combine with 3’UTR of target mRNA, hence promoting degradation of target mRNA. Firstly, we collected potential upstream microRNA targeting KIF23 mRNA from starbase database (http://starbase.sysu.edu.cn/) (15), targetscan database (http://www.targetscan.org/) (16), miRDB database (http://mirdb.org/) (17) and Tarbase database (http://carolina.imis.athena-innovation.gr/) (18). Resultsfrom the sources presented 16 microRNAs were potential to regulate KIF23 in breast cancer (Figure 4A). Hsa_miR-195-5pwas a potential tumor suppressor in breast cancer in our previous study (19), expression of miR-195-5p was lower in breast cancer tissues and negative correlated with expression of KIF23 mRNA according to the starbase database (Figure S1C,D). Next, we transfected MDA-MB-231 and BT549 with hsa-miR-195-5p mimics to detect expression change of KIF23, interestingly, similar to siRNA-induced downregulation of KIF23, after TNBC cells transfected with miR-195-5p mimics, expression of KIF23 decreased (Figure 4B). To further explore the relationship between hsa-miR-195-5p and KIF23, we carried out dual luciferase reporter assay. 293T cells were transfected with miR-195-5p mimics and wildtype KIF23-3’UTR or mutated KIF23-3’UTR. Co-transfected 293T cells with hsa-miR-195-5p mimics and wildtype KIF23-3’UTR group have the lowest luciferase activity (Figure 4C,D), which indicated that miR-195-5p directly combines with 3’UTR of KIF23 mRNA. To explore biological function of miR-195-5p in TNBC cells, we transfected miR-195-5p mimics into MDA-MB-231 and BT549 cells, colony formation assays and transwell assays revealed miR-195-5p could inhibit proliferation and migration of TNBC cells (Figure 4E). 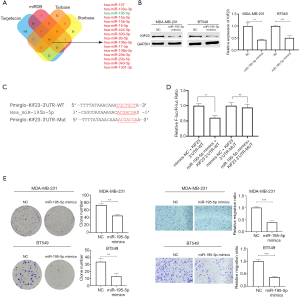 Triple negative breast cancer is the most challenging breast cancer subtype with higher rates of relapse and metastatic potential compared to other breast cancer subtypes. In early TNBC, patients could benefit from pembrolizumab (PD-L1 antagonistic monoclonal antibody) plus neoadjuvant chemotherapy (20). BRCA1/2 are well-studied gene in TNBC, and it is encouraging that the adenosine diphosphate-ribose polymerase inhibitor Olaparib could be effective in TNBC patients with BRCA mutation (21). However, because of the intrinsic complexity of TNBC, it is necessary to find out novel therapeutic targets. Kinesin superfamily proteins are involved in cells mitosis, meiosis, and the transport of macromolecules, aberrant expression of Kinesins could result in cell death, chromosome duplication tumorigenesis and tumor progression (22).

In our study, KIF23 was overexpressed in TNBC tissues compared to paired paracancer tissues, which was consistent with previous study (9). After transfection with KIF23-siRNA or negative control in MDA-MB-231 and BT549, CCK-8 assay, colony formation, wound healing assay and transwell assay were carried out to explore phenotypic change. As our results showed, knockdown of KIF23 by siRNA in TNBC cell lines MDA-MB-231 and BT-549 results in inhibition of proliferation and migration. Our data preliminarily showed that KIF23 plays an oncogene role in TNBC.

Epithelial-mesenchymal transition (EMT) is a biological process by which epithelial cells loss expression of E-cadherin and acquire the ability to migrate (23). Knockdown of KIF23 suppresses the expression of N-Cadherin and Vimentin, while expression of E- Cadherin is increased. While the exact mechanism how KIF23 influence EMT is still unclear, further studies should be conducted.

MicroRNAs are cluster of small non-coding RNAs mainly combine with 5’-UTR or 3’UTR of target mRNA thus promoting degradation of mRNA. We analysis 4 databases and find miR-195-5p as a potential upstream miRNA targeting KIF23 mRNA, qRT-PCR results revealed that miR-195-5p is downregulated in TNBC tissues. Hence, we carried out dual luciferase reporter assay and confirmed miR-195-5p could combine with 3’UTR of KIF23 mRNA.

In conclusion, KIF23 is overexpressed in TNBC tissues, siRNA induced knockdown of KIF23 inhibits proliferation and migration of MDA-MB-231 and BT-549 cells. MiR-195-5P is downregulated in TNBC tissues and suppress expression of KIF23 by directly combining with 3’UTR of KIF23 mRNA. Our results provide a potential novel target to TNBC.

We give special thanks to all other members in our research group for their valuable suggestion.

Funding: This work was supported by the National Natural Science Foundation of China (No. 82073204) and Shanghai Municipal Health Commission (No. 202040157).

Reporting Checklist: The authors have completed the MDAR reporting checklist. Available at https://dx.doi.org/10.21037/gs-21-19

Conflicts of Interest: All authors have completed the ICMJE uniform disclosure form (available at https://dx.doi.org/10.21037/gs-21-19). The authors have no conflicts of interest to declare.

Ethical Statement: The authors are accountable for all aspects of the work in ensuring that questions related to the accuracy or integrity of any part of the work are appropriately investigated and resolved. The study was conducted in accordance with the Declaration of Helsinki (as revised in 2013). The study was approved by ethics board of Shanghai Tenth People’s Hospital (NO. 2020-KN174-01). All patients were contacted by telephone to obtain verbal informed consent.