Ideally, oncoplastic surgery will provide aesthetically pleasing results while achieving appropriate oncologic safety (5). However, a potential pitfall of these oncoplastic techniques is uncertainty regarding the blood supply to the remaining flaps and the nipple-areola complex (NAC) (2,3). Post-procedural nipple and skin necrosis rates as high as 38% have been reported (5). Patients with a large cup size or a previous history of surgery or radiation are considered high risk for nipple-sparing mastectomies because these factors are associated with even higher rates of complications (2).

Currently, standard film mammograms do not allow the clear identification and measurement of non-glandular breast tissue coverage. In contrast, digital mammography clearly distinguishes gland tissue density from tegument and fat coverage; accordingly, this preoperative imaging modality can determine the coverage thickness (6,7) (i.e., distance between the breast skin and Cooper’s ligaments surrounding the gland; Figures 1,2). As incision planning, treatment selection, surgical technique, and reconstructive procedures are usually related to the breast volume, tumor characteristics, and surgeons’ and patients’ preferences, preoperative information regarding the breast tissue coverage thickness might highlight the likelihood of post-mastectomy flap issues and assist with the planning process, rather than relying on breast volume alone as a guideline (2). 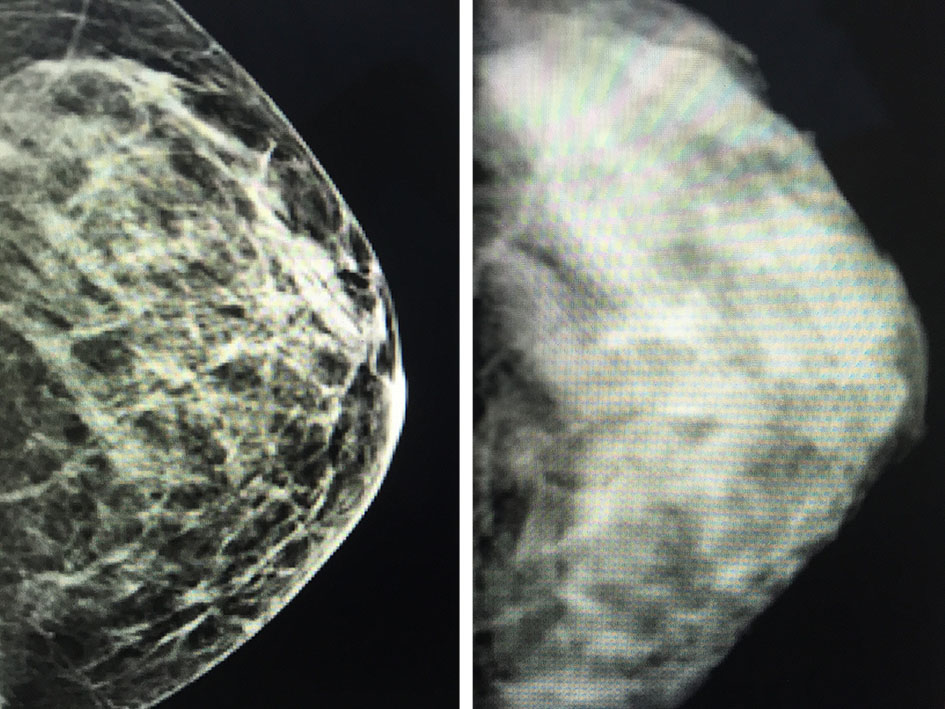 Figure 1 Difference of density between digital and standard (film) mammograms of a same patient. 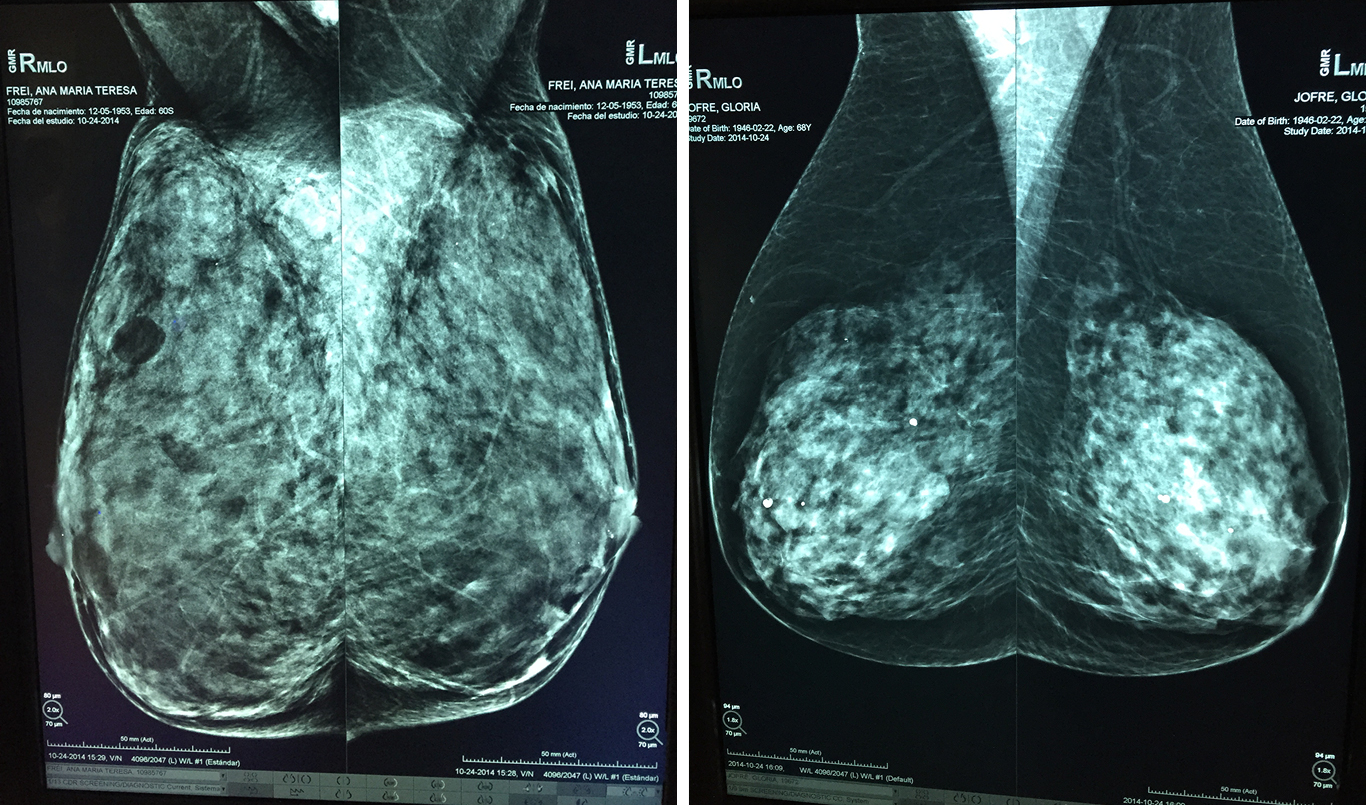 A total of 176 Caucasian women were stratified into five groups according to the Lalardie and Jouglard (8) classification of breast volume. Descriptive statistics regarding data from each group are summarized in Table 1.

Initially, 200 patients who underwent preoperative digital mammography for conservative mastectomy at our institution between January 2013 and February 2015 were selected randomly. Twenty-four cases were excluded. The exclusion criteria were severe breast asymmetry (>20% difference in size between breasts) and previous breast surgery. A total of 352 preoperative digital mammograms corresponding to the 176 remaining patients were retrospectively reviewed. The subject ages ranged from 33 to 70 years (mean: 49 years).

Breast volume was assessed using the BREAST-V (9), a free simple tool for IOS and Android devices (available from the Apple Store and Google Play Store, respectively) based on a mathematical algorithm that allows estimations of breast volume using direct measurements of three anthropomorphic values. Patients were stratified into groups as described above. All digital mammographic studies were performed on a 3D Selenia Dimensions Full Field Digital Mammograph (Hologic, Bedford, MA, USA). A single evaluator obtained all measurements with OSIRIX Software (available at www.osirix-viewer.com) from DICOM-format digital mammogram files with a lateral medium oblique incidence and angulation between 40° and 50°. 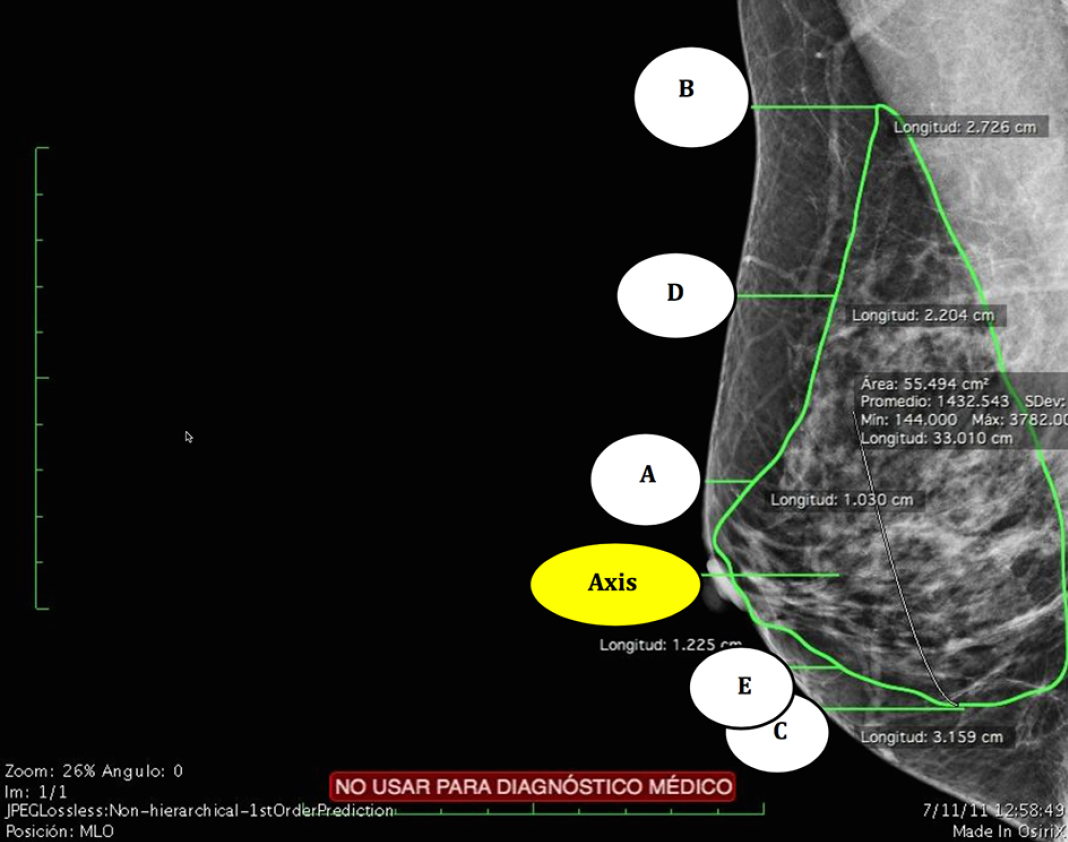 With the axis corresponding to the nipple line:

For each image, average tissue coverage was obtained and correlated with the corresponding breast volume group (A to E; Table 1).

Statistical analyses were performed using R software (version 2.14.2) (10). As 95% of our sample fell within approximately two standard deviations of the mean, we obtained mean tissue cover thickness measures to establish reference intervals for our breast tissue cover classification. As a result, breast tissue coverage was coded as poor (type 1), medium (type 2), and good (type 3) according to the mean standard deviations of the overall values (Table 2).

Differences between two directly consecutive breast volume groups were not statistically significant; however, there was a trend toward a flap thickness increase when comparing groups with greater differences in breast volume. Breast tissue coverage varied from 0.2 to 4.4 mm, with an average of 1.952 cm (Table 1). The median values for measurements A, B, C, D, and E were 1.02, 2.43, 2.62, 1.68, and 1.71 cm, respectively. 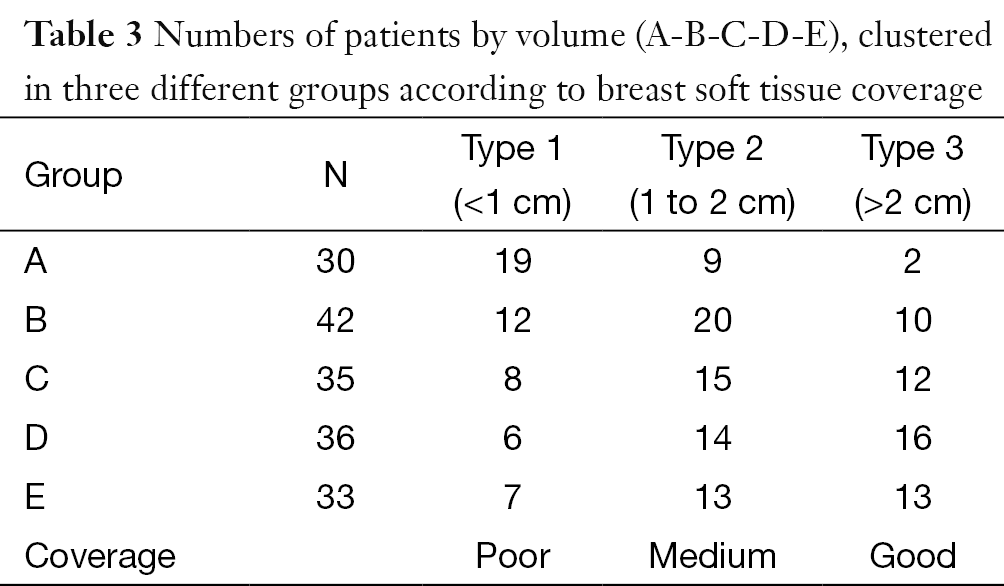 To our knowledge, no reports have previously addressed the relationship between breast tissue coverage and breast volume. However, adequate fat tissue coverage thickness is one of the most important independent factors in immediate breast reconstruction and flap survival (11-13). Anatomically, the vascular network that ensures flap survival and NAC runs between Cooper’s ligaments and the skin (14). Compression of this vascular network by implant insertion, surgical damage, tissue tension at closure, or extremely thin flaps might endanger vascularization, and such events have been shown to cause tissue damage in the distal parts of flaps (8-21). Consideration must therefore be given to this preoperative breast tissue coverage measure as an important factor in immediate reconstruction.

One of the most important factors for vascularization of the remaining post-mastectomy flaps is preservation of the skin perforators and flap thickness (11,12,17,18). The remaining skin flap thickness after gland resection during conservative mastectomy plays an important role in flap integrity and NAC vitality. Cooper’s ligaments separate the mammary gland from the superficial fat and skin tissue layers that contain the vascular plexus, of which the mastectomy flaps are composed (13). The vascularization and, therefore, the viability of the remaining flaps may be compromised after gland resection if this flap tissue coverage is too thin and/or closure tension is forced. Preoperative information regarding this tissue coverage is therefore of the utmost importance to avoid complications associated with immediate reconstruction procedures (11,16,17).

The selection of mastectomy and reconstruction procedures should be made jointly by the oncologic and plastic surgeon based on objective pre-operative information (12,18,19). In this study, we observed that breast tissue coverage and breast volume are independent factors (Table 1). This finding suggests that a preoperative measurement of the breast tissue coverage thickness is important for surgical decisions.

For large breasts, conservative mastectomy is usually designed according to the Wise pattern for skin reduction, shape, and projection. This procedure is considered suitable for single-stage reconstruction with implants (4). Regardless of breast volume, however, a preoperative evaluation of tissue coverage is crucial for surgical planning by both the oncologic and plastic surgeon as this factor is directly related to flap and NAC ischemia/necrosis. Thin flaps can lead to ischemic complications following mastectomies and reconstructive procedures (11,17). Preoperative digital mammography is therefore potentially useful not only for tumor detection, but as an objective tool for predicts the resulting flap thickness, thus improving patient safety.

Flap damage after mastectomy is a serious complication during immediate breast reconstruction (22-24). Preoperative breast tissue coverage and flap thickness evaluations via digital mammography should be considered during surgical planning, and the proposed classification may help to identify patients at high risk for flap ischemia and necrosis. Digital mammography offers the possibility of preoperative measurements and better predictions of flap thickness and vitality after mastectomy (6,7), thus improving patient safety (13,14,20,25,26).

Based on the obtained range of coverage values, we propose a 3-stage breast tissue coverage classification (BTCC) as follows: type 1, ≤1 cm (poor coverage); type 2, 1-2 cm (medium coverage); and type 3, >2 cm (good coverage; Table 2). This classification may inform the rational use of materials for individual patients rather than according to breast volume, surgeon’s experience, or comfort (21,27). As a result, preoperative communication between the reconstructive and oncologic surgeons regarding the incision choice and integumentary preservation according to digital mammogram findings might lead to improved outcomes with a decreased rate of complications.

This study has generated normative data for breast tissue coverage measurements in different breast volumes to provide three thickness classification levels. This information may be useful as a reference for future investigations of various breast surgical procedures and for the rational use of materials in conservative mastectomies and immediate reconstruction. Our study is limited, however, by the lack of validation of the BREAST-V tool against standard 3D virtual techniques; nevertheless, this tool underwent a strict development process that included internal and cross-validation of the model to verify the reliability of the algorithm (9,19). A comparison of the predictive performances of BREAST-V with a previous published formula demonstrated higher accuracy when evaluating breast volumes on new breasts (i.e., those not used to derive the formula). These considerations highlight the reliability of this tool.