Unexpected remission of hyperparathyroidism caused by hemorrhage due to the use of fine-needle aspiration biopsy: two cases report

A 58-year-old man who was undergoing osteoporosis treatment visited Severance Hospital for treatment. During consultation with the Endocrine Department, hypercalcemia and elevated parathyroid hormone (PTH) levels were confirmed [PTH level, 267.3 pg/mL (normal, 15–65 pg/mL); serum calcium level, 11.1 mg/dL (normal, 8.5–10.5 mg/dL)]. Ultrasound evaluation revealed a left extrathyroidal neck mass measuring 2.6 cm × 1.6 cm, which was suspected to be a parathyroid adenoma (Figure 1A). FNAB of the extrathyroidal mass was performed; the slide was assessed to be nondiagnostic by a pathologist due to blood mixed cytology. There were no immediate complications, and the patient did not complain of any discomfort. Four days after FNAB, the patient developed swelling and neck pain accompanied by odynophagia. He presented to an outpatient radiology clinic, where ultrasound evaluation revealed enlargement of the original mass (2.9 cm × 2.1 cm) that was mixed with an intracapsular hematoma in the left neck (Figure 1B,C). Functional single-photon emission computed tomography using 99mTc-sestamibi (SPECT MIBI), performed for localization before surgery, revealed a non-uptaken lesion measuring 2.5 cm in the left neck between the thyroid gland and the esophagus. 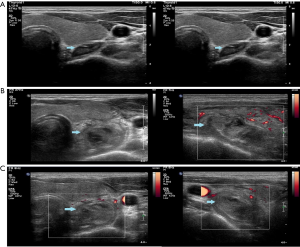 The patient underwent left-focused parathyroidectomy. Because there was severe fibrosis and an inflamed mass, it was difficult to confirm the parathyroid lesion; hence, a part of the specimen was sent for pathological examination intraoperatively. Frozen biopsy revealed fibrotic tissue with necrosis. Therefore, the second specimen that was excised from mass-like fibrotic tissues was sent for pathological evaluation. The second specimen revealed near total necrotic material. The pathologist did not confirm the specimen to be a parathyroid lesion. After confirming that intraoperative PTH level had dropped from 267 to 69.4 pg/dL, the operation was completed.

A permanent pathology report revealed that the parathyroid specimen was characterized by near total necrotic material with parathyroid gland cells, confirmed using immunohistochemical staining for chromogranin A. There was no focus of parathyroid hyperplasia or adenomatous lesion in the pathological review (Figure 2). Therefore, the suspected parathyroid adenoma was thought to have changed to iatrogenic necrosis due to FNAB-induced intracapsular hemorrhage, and only normal parathyroid tissue remained. Preoperative SPECT MIBI and immunohistopathological findings demonstrated the functional change in the parathyroid adenoma due to FNAB-induced intracapsular hemorrhage.

Figure 2 Microscopic appearance of the parathyroid lesion (case 1). (A) Near total necrotic material is seen on hematoxylin-eosin stain (×40); (B) parathyroid cells confirmed using immunochemical staining for chromogranin A (×200).

A 37-year-old woman receiving hemodialysis treatment for end-stage renal disease was diagnosed with secondary hyperparathyroidism. Her PTH level was 447.1 pg/mL (normal, 15–65 pg/mL), and her serum calcium level was 11.1 mg/dL (normal, 8.5–10.5 mg/dL). Functional SPECT MIBI revealed bilateral uptake lesion in the lower thyroid (Figure 3). Ultrasound evaluation revealed a right lower extrathyroidal neck mass measuring 2.0 cm × 1.5 cm and a left lower extrathyroidal neck mass measuring 1.3 cm × 1.2 cm, which was suspected to be a parathyroid lesion (Figure 4A,B). One pass was made into the each extrathyroidal mass using a 24-gauge needle, and the slides were identified by a pathologist as chief cell proliferation, favoring parathyroid hyperplasia. The level washout PTH from the extrathyroidal mass was >1,000 pg/mL. There were no immediate complications, and the patient did not complain of any discomfort. Ten days after FNAB, the patient presented to an outpatient nephrology and endocrinology clinic. Her PTH level had dropped from 447 to 68.3 pg/mL, and her serum calcium level had dropped from 11.1 to 9.7 mg/dL. After consultation with an endocrine surgeon, she decided to undergo parathyroidectomy 2 months later. Because of the decreasing PTH and calcium level, we rechecked the PTH and calcium levels. The serum calcium level remained at 9.7 mg/dL, but the PTH level had slightly increased to 102.2 pg/mL. When the patient was admitted for surgery, routine chemistry laboratory test results, including calcium and electrolyte levels, were rechecked. The serum calcium level was 9.3 mg/dL. The patient underwent bilateral total parathyroidectomy; which appeared normal, was minced to a size of <1 mm and auto-transplanted to the brachialis muscle in the right forearm. Frozen biopsy revealed parathyroid hyperplasia. After the operation was completed, we confirmed that the intraoperative PTH level had dropped from 102.2 to 30.5 pg/dL. 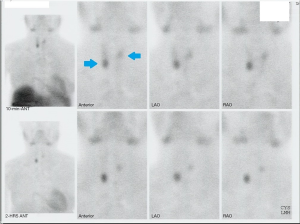 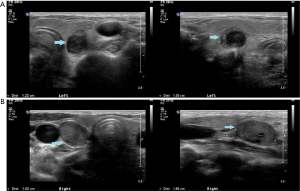 In line with our expectations, a permanent pathology report revealed that the specimen obtained during FNAB had central infarction and hemosiderin deposits. There was still a focus of hyperplastic parathyroid lesion in the pathologic review (Figure 5). All information in both cases were obtained through retrospective literature review, and informed consent was not required as it did not contain information that could identify the patients. All procedures performed in studies involving human participants were in accordance with the ethical standards of the institutional and/or national research committee(s) and with the Helsinki Declaration (as revised in 2013).

In the first case, intracapsular hemorrhage was confirmed in the final pathology report, but the clinical manifestations were somewhat severe including neck pain and severe swelling. The second case did not involve any notable clinical symptoms.

Some authors have reported that spontaneous resolution is temporary; therefore, close follow-up or parathyroidectomy is required (3,7,9). However, other authors have reported that cyclical secretion of PTH by the parathyroid adenoma causes hypercalcemic crises, followed by a spontaneous decrease in PTH levels. However, the patient had renal insufficiency; hence, the cyclic PTH fluctuation may have been caused by pending chronic renal failure (10). In cases reported by Kwak et al., the PTH level rebounded after 6 months; hence, surgical treatment was provided; the parathyroid lesion in the permanent biopsy sample was confirmed to be a parathyroid adenoma (11).

In the first case in our report, iatrogenic hemorrhage due to the use of FNAB led to unexpected remission of the parathyroid adenoma. We worried about airway compression due to hemorrhage and performed serial neck ultrasonography. Although the SPECT MIBI results were negative, the parathyroidectomy was performed according to schedule. We could not identify parathyroid cells in the frozen biopsy, which revealed only fibrotic tissue with necrosis. The spontaneous remission of hyperparathyroidism may have been caused by intracapsular hemorrhage. In the second case in our report, based on serial laboratory follow-up tests, we could prove that the PTH and serum calcium levels decreased to the normal range. Both cases in our report remained in that state for a long time after remission. The first patient maintained a normal level of PTH for 6 years, and the second patient received kidney transplantation 6 years after surgery, and the normal level of PTH was confirmed for 13 years.

Recently, a case report described a case of acute airway comprise due to spontaneous hemorrhage of a parathyroid adenoma (14). The parathyroid gland is an organ vulnerable to ischemia caused by rapid growth. Studies on spontaneous and iatrogenic remission support that procedures, such as percutaneous ethanol injection for hyperparathyroidism, may be performed in severely sick patients who cannot undergo general anesthesia (15). However, the potential for iatrogenic airway damage due to bleeding caused by the injection procedure should always be kept in mind.

Spontaneous remission of hyperparathyroidism is a rare phenomenon, and disease-causing evidence has recently emerged and explained. It might be possible to predict whether permanent or temporary remission of hyperparathyroidism depends on the degree of abnormal change caused by bleeding. However, it is unclear why spontaneous remission is maintained or leads to disease recurrence. In similar cases, more attention should be given to patient’s quality of life. Further studies are needed to confirm the risk or justification of FNAB for parathyroid adenoma and understand whether it is a more reasonable management strategy than close follow-up or immediate surgery.

Reporting Checklist: The authors have completed the CARE reporting checklist. Available at https://dx.doi.org/10.21037/gs-21-6

Conflicts of Interest: All authors have completed the ICMJE uniform disclosure form (available at https://dx.doi.org/10.21037/gs-21-6). The authors have no conflicts of interest to declare.

Ethical Statement: The authors are accountable for all aspects of the work in ensuring that questions related to the accuracy or integrity of any part of the work are appropriately investigated and resolved. All information in both cases were obtained through retrospective literature review, and informed consent was not required as it did not contain information that could identify the patients. All procedures performed in studies involving human participants were in accordance with the ethical standards of the institutional and/or national research committee(s) and with the Helsinki Declaration (as revised in 2013).