Autologous breast reconstruction is often considered a preference to alloplastic options, given that a more natural shape and feel can be achieved, as well as the creation of a breast with ptosis and volume. The deep inferior epigastric artery (DIEA) perforator flap is felt to be the most ideal option, with second tier options available that include the transverse upper gracilis (TUG), lumbar and latissimus dorsi flaps (1-5). There are cases, however, where even a deep inferior epigastric perforator (DIEP) flap cannot provide the volume of autologous tissue required for a unilateral breast reconstruction, and as a consequence, the concept of simus dor bilateral DIEP flaps was developed, in which hemi-abdominal flaps are raised on each DIEA, and both flaps transferred to the chest recipient site.

While the terminology has been confusing, with terms used to mean various flap configurations, the terms ‘stacked’, ‘double-pedicled’ or ‘bipedicled’ have each been used to describe inclusion of the entire abdominal pannus on two pedicles, transferred to create a single breast reconstruction. Prior to the design of DIEP flaps being introduced into clinic practice, the abdominal wall was used in a bipedicled fashion in the way of bipedicled or stacked transverse rectus abdominis myocutaneous (TRAM) flaps (6). Bipedicled TRAM flaps were achieved through a pedicled TRAM flap (superior epigastric pedicle), supplemented with the use of a microsurgical anastomosis to the DIEA or vein, or with the use of both superior and inferior pedicles (6). Arnez et al. described the bipedicled free TRAM flap, anastomosed onto both the thoracodorsal and serratus anterior branches, which was in particular described as useful for cases with midline abdominal scars that required larger volume reconstructions (7). Donor morbidity associated with sacrificing both rectus abdominis muscles was considered unacceptable, leading to diminishing use of both rectus muscles in the form of both TRAM flaps (8,9), however, microsurgical augmentation of a unilateral TRAM flap was widely described in a range of vascular configurations, with different pedicle arrangements, cross-over anastomoses and retro-grade vascular loops have all been described (10-16).

With the development of the DIEP flap (1-5), the use of ‘stacked’ or ‘double-pedicled’ DIEP flaps was reintroduced by the current senior author of this paper (17). The stacked DIEP flap concept is of particular benefit for thinner patients and those with midline abdominal scars. The use of stacked DIEP flaps has been successfully reported now in a range of clinical series, and with a range of classifications for pedicle arrangements described (17-25). Where stacked DIEP flaps are not possible, the superficial inferior epigastric artery (SIEA) has been used as a secondary pedicle (19), and bilateral profunda artery perforator flaps stacked have been used (26).

A 49-year-old woman, with BRCA1 mutation, attended the multidisciplinary risk-reducing clinic, with a decision from the medical team and patient to undertake bilateral risk-reducing mastectomies, and immediate breast reconstruction. The patient had a strong preference for autologous reconstruction alone, and due to a paucity of abdominal tissue, a decision was made to use stacked flaps bilaterally: with a DIEP flap and TUG flap suitable for reconstruction of each side.

The patient was well, with no known comorbidities, a non-smoker and no medications.

Flap design was planned in a manner to achieve maximal projection and primary nipple reconstruction. This was able to be achieved by using the DIEP flap de-epithelialized and completely buried, with the flap orientated with the pedicle on its superficial surface, and the TUG flap lying superficially with its skin paddle used for nipple reconstruction and able to be monitored clinically (see schematic in Figure 1). 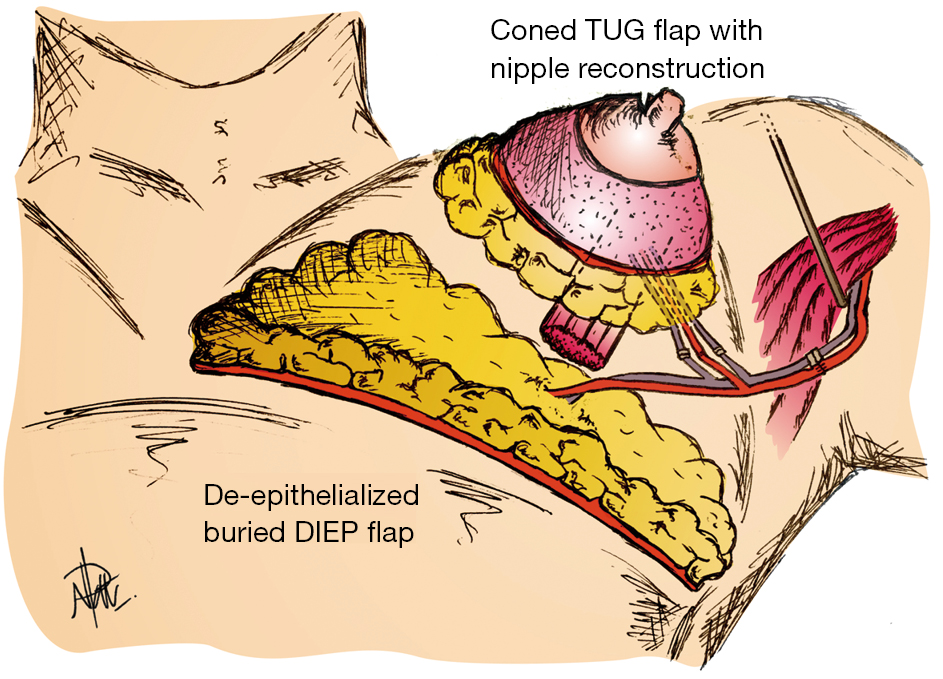 Figure 1 Schematic diagram of flap design, with the DIEP flap de-epithelialized and completely buried, with the flap orientated with the pedicle on its superficial surface, and the TUG flap lying superficially with its skin paddle used for nipple reconstruction and able to be monitored clinically. TUG, transverse upper gracilis; DIEP, deep inferior epigastric perforator.

A preoperative computed tomographic angiogram (CTA) of the abdominal wall vasculature was used to delineate the optimal perforators for DIEP flap harvest (see Figure 2). The CTA was able to also delineate the recipient pedicle for the TUG flap. This is highlighted in Figure 3, in which a type 1 DIEA was identified bilaterally, with the distal end of the DIEA thus selected as the recipient vessels for the TUG flap on each side. 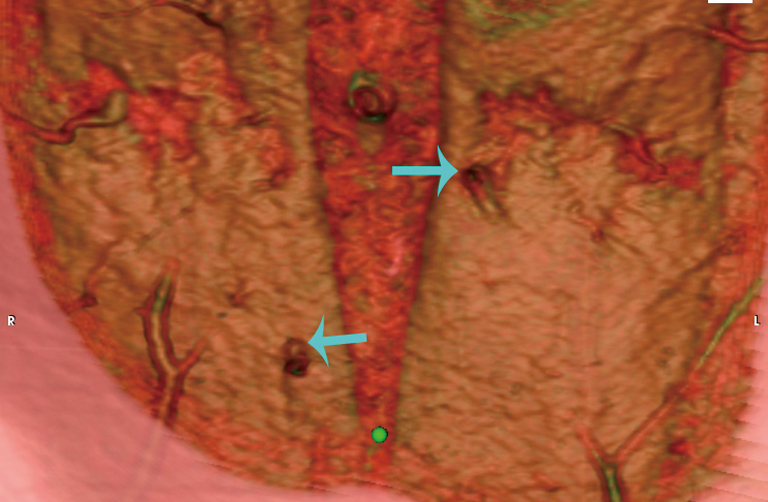 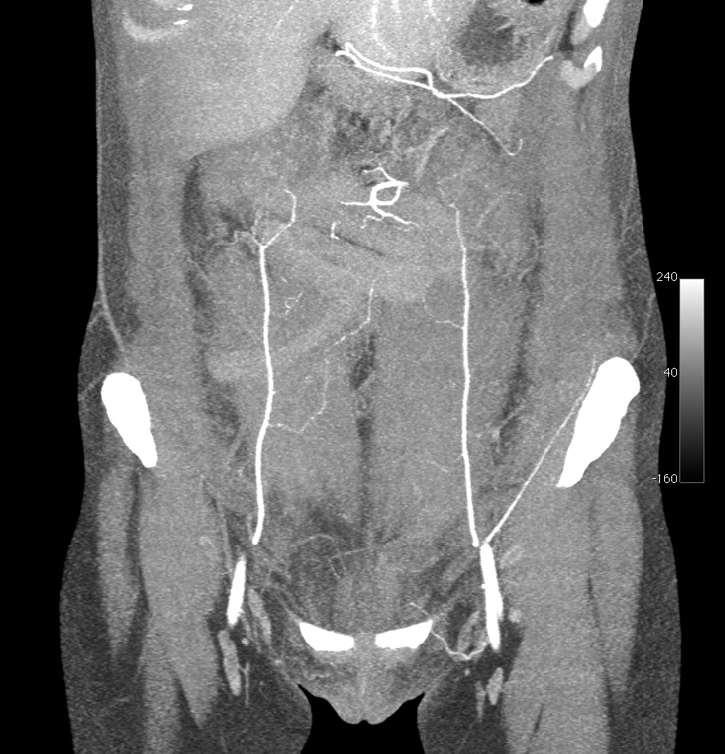 Given the operative complexity, three concurrent surgical teams were operating, utilized in the following manner:

The case proceeded uneventfully, with a single perforator DIEP flap raised on each side (see CTA in Figure 2), and the thoracodorsal vessels used as recipient vessels bilaterally. For one side, the pedicle length necessitated a vein graft for reach, with a long saphenous vein tributary from the thigh donor site used (and thus no additional morbidity). The duration of the case was just under 8 hours, and the patient had an uneventful early perioperative and immediate postoperative course, discharged home on day 7 post-operatively (see Figure 4). Of note, the patient was given preoperative clexane for venous thrombo-prophylaxis, and this was continued for 1 week post-operatively with the concurrent use of graded compression stockings, until full mobilization was achieved. There were no flap-related complications, and the donor sites healed unremarkably (see Figures 4-6). The aesthetic result at 3 months postoperatively is shown in Figure 7. 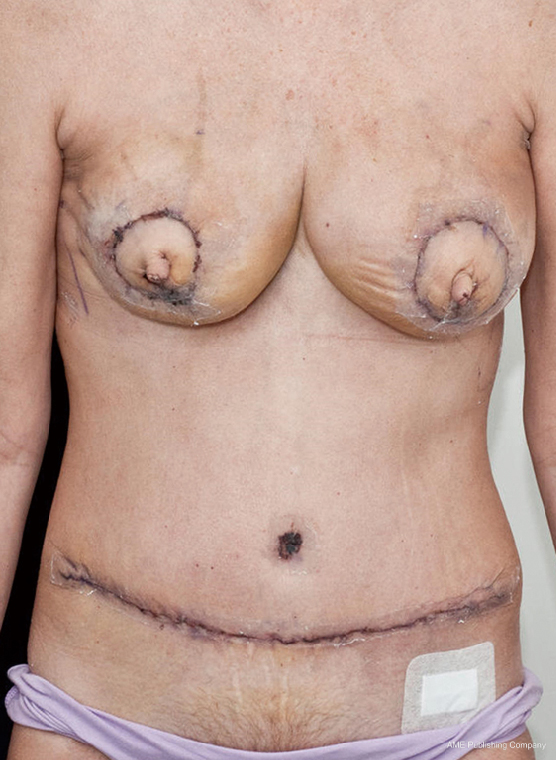 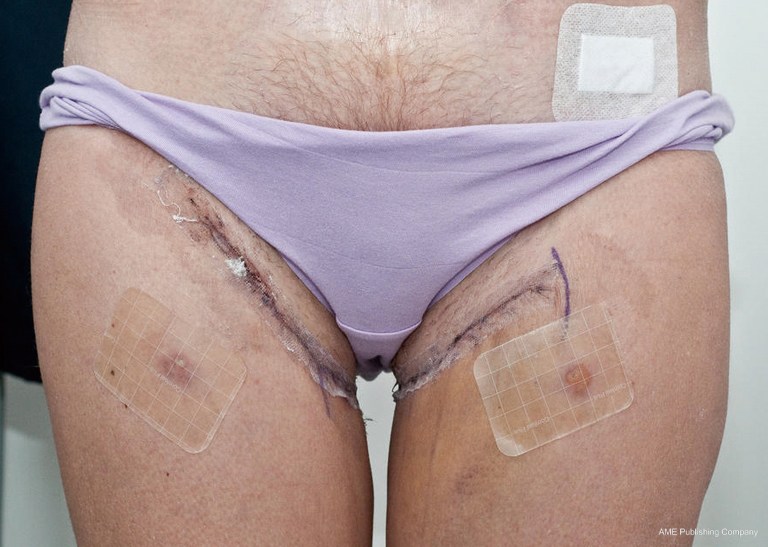 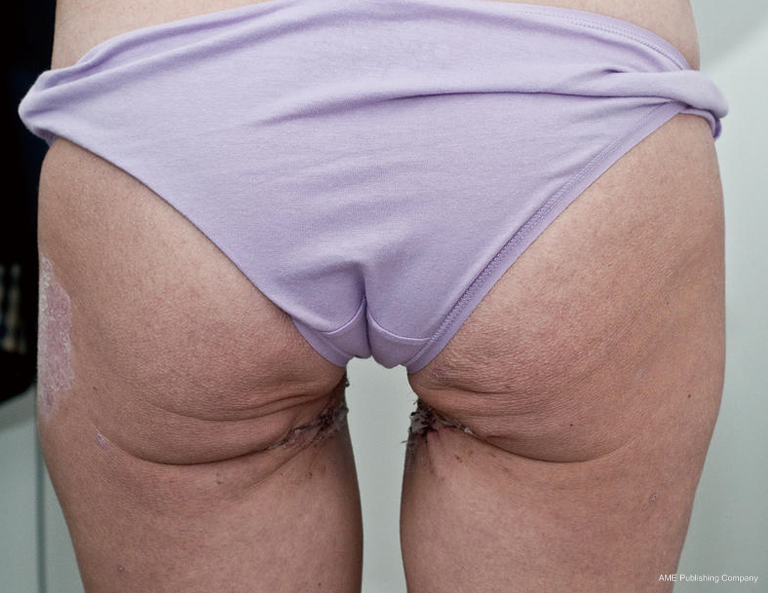 Figure 6 Postoperative view of the transverse upper gracilis (TUG) donor site from the back. 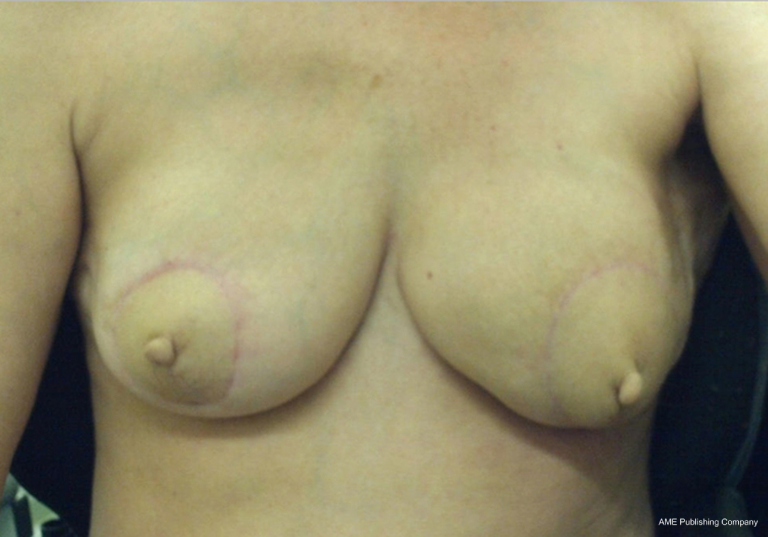 There was, however, a significant complication that arose on day 14 postoperatively. The patient presented on the 14th postoperative day to the emergency department with a dense hemiplegia and aphasia consistent with a cerebrovascular stroke. Investigations were performed, including a carotid Doppler which demonstrated a right carotid free floating thrombus, and both CT and MRI which demonstrated a right-sided ischaemic stroke, mass effect with midline shift and decreased ventricular size. The patient underwent immediate transfer to a neurosurgical centre, where she was taken to theatre for decompressive craniectomy. She responded well, with improvement in clinical and imaging findings, and discharge 7 days later. With ongoing neurologic rehab 2 months later, the patient has shown resolution of her aphasias/dysphasia, but an ongoing hemiplegia. The case was discussed within the neurosurgical and anaesthetic department meetings, and the cause for the stroke is unknown. No patient factors for the carotid thrombosis have been identified despite haematologic screening, no hyperextension of the neck during the anaesthetic was observed but may have contributed, and while a prolonged operation may be theoretically contributory, the 8 hours for this case was not clearly considered a factor.

The use of stacked abdominal flaps has been a widely used and successful addition to the armamentarium of autologous breast reconstruction options in unilateral reconstruction cases. In bilateral cases, the options are much more limited. We present an option, in which stacked flaps are used for the reconstruction of each breast, with the TUG flap used to augment bilateral DIEP flaps. Our case demonstrates the relative efficiency of such an approach, and the aesthetic outcome able to be achieved in a patient with paucity of abdominal volume.

There are several key factors that are essential to achieve success in this approach. The first is the use of preoperative CTA. The preoperative CTA can highlight the optimal perforator for flap harvest, reducing harvest times and ensuring that the case suitable, and optimized. The ability of CTA to achieve these ends with accuracy has been demonstrated in multiple previous studies (27-32), highlighting a high degree of specificity and sensitivity, and showing improvements in flap-related outcomes and operative times. In addition to CTA, the use of three surgical teams concurrently operating is essential for operative efficiency. In the five stages highlighted, there is never a team not contributing to the case, and we would advise this to ensure that such a case does not encroach upon excessive operative times.

While the aesthetic and reconstructive outcomes were all achieved, the devastating complication encountered is a reminder as to the risks of any surgery. The consent process is paramount, particularly in the case of risk-reduction surgery, and it is essential that each patient weigh-up the risks in electing to proceed in any breast reconstructive case. While no factors were implicated in the causality or even to be contributory to this outcome in our case, diligence in case selection and prophylactic measures for all complications are essential.

Informed Consent: Written informed consent was obtained from the patient for publication of this case report and any accompanying images. A copy of the written consent is available for review by the Editor-in-Chief of this journal.