Relationship between inpatient satisfaction and the quality of surgery

We present the following article in accordance with the SURGE reporting checklist (available at http://dx.doi.org/10.21037/gs-21-289).

In this study, based on Chongqing’s medical service architecture and distribution, 10 tertiary A hospitals in Chongqing were selected as the study units using a stratified sampling principle, and 5,000 hospitalized surgical patients at these hospitals were randomly selected as the study subjects. To be eligible to participate in this study, patients had to meet the following inclusion criteria: (I) have been hospitalized for more than 3 days; (II) be in a stable condition; and (III) they had to be willing to participate in the questionnaire, and sign the Informed Consent Form. A total of 5,000 questionnaires were randomly distributed, and 4,665 valid questionnaires were returned; thus, there was a response rate of 93.3%. Figure 1 shows the flow chart of study subject deletion and selection. All procedures performed in this study involving human participants were in accordance with the Declaration of Helsinki (as revised in 2013). The study was approved by ethics board of Army Medical University (No.: IRB-2019-12) and informed consent was taken from all the patients. 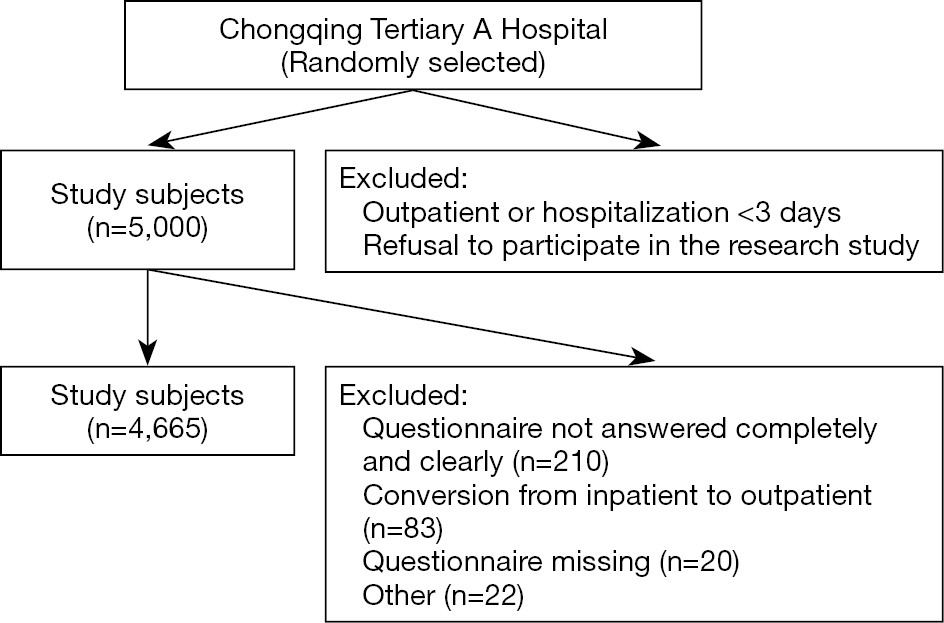 The primary variables of this study were divided into three categories: (I) the demographic and sociological characteristics of inpatients; (II) hospitalization perceptions; and (III) the quality of surgery. The quality of surgery mainly related to 30-day postoperative mortality, major and minor complications, the rescue failure rate, readmission, and the incision infection rate.

SPSS 19.0 statistical software was used for the data entry and analysis. The enumeration data were expressed as a (%). A univariate analysis of patients’ demographic sociological characteristics, hospitalization perceptions and the effects of the surgical quality on overall satisfaction was undertaken using a chi-square test. A multivariate analysis of the factors affecting satisfaction was undertaken via a logistic regression analysis. A P<0.05 was considered statistically significant.

Satisfaction of inpatients with different demographic and sociological characteristics 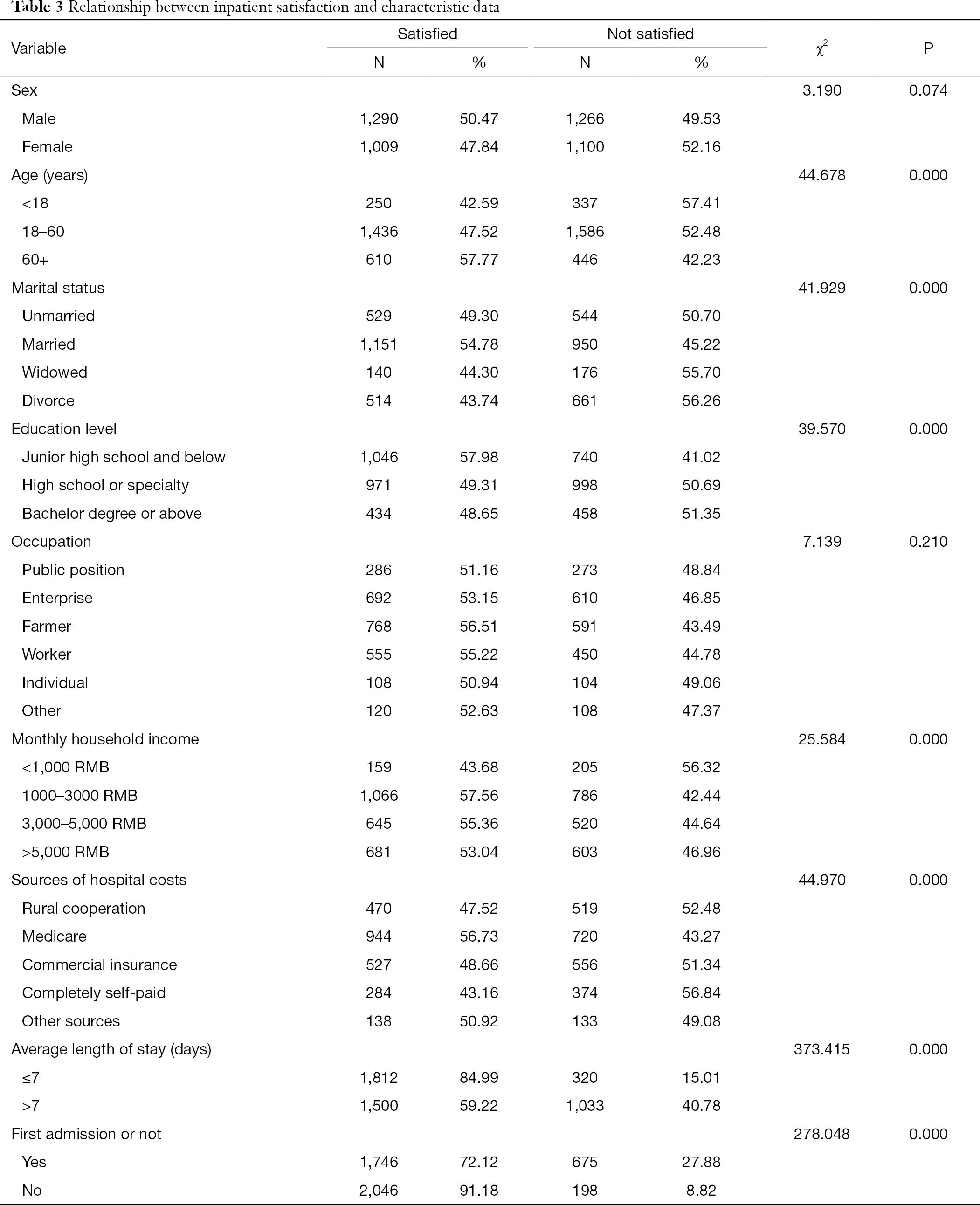 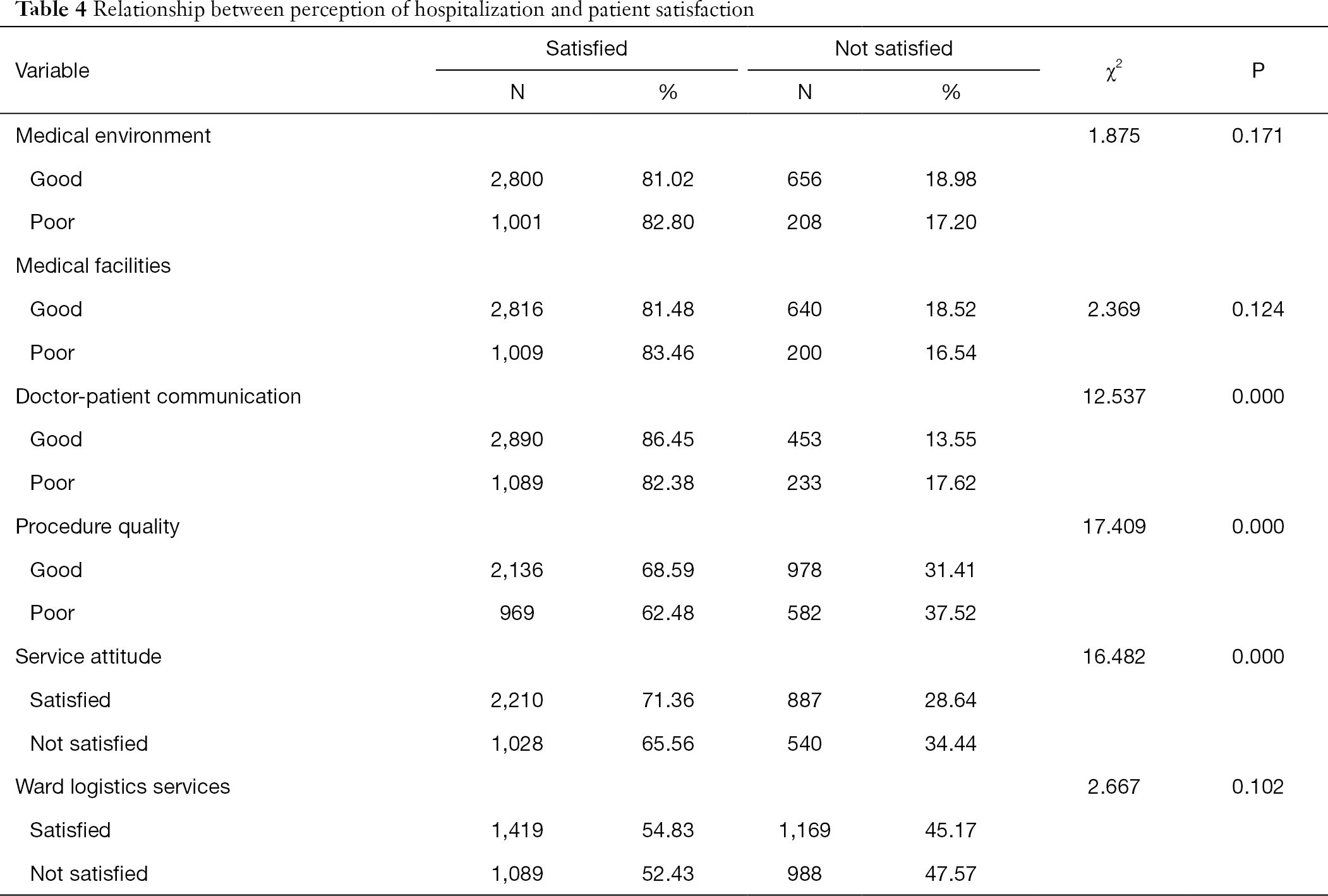 In relation to the relationship between inpatient satisfaction and surgical quality indicators, there were significant differences in 30-day postoperative mortality, major and minor complications, the rescue failure rate, the readmission rate, and the incision infection rate (all P=0.000; see Table 5). 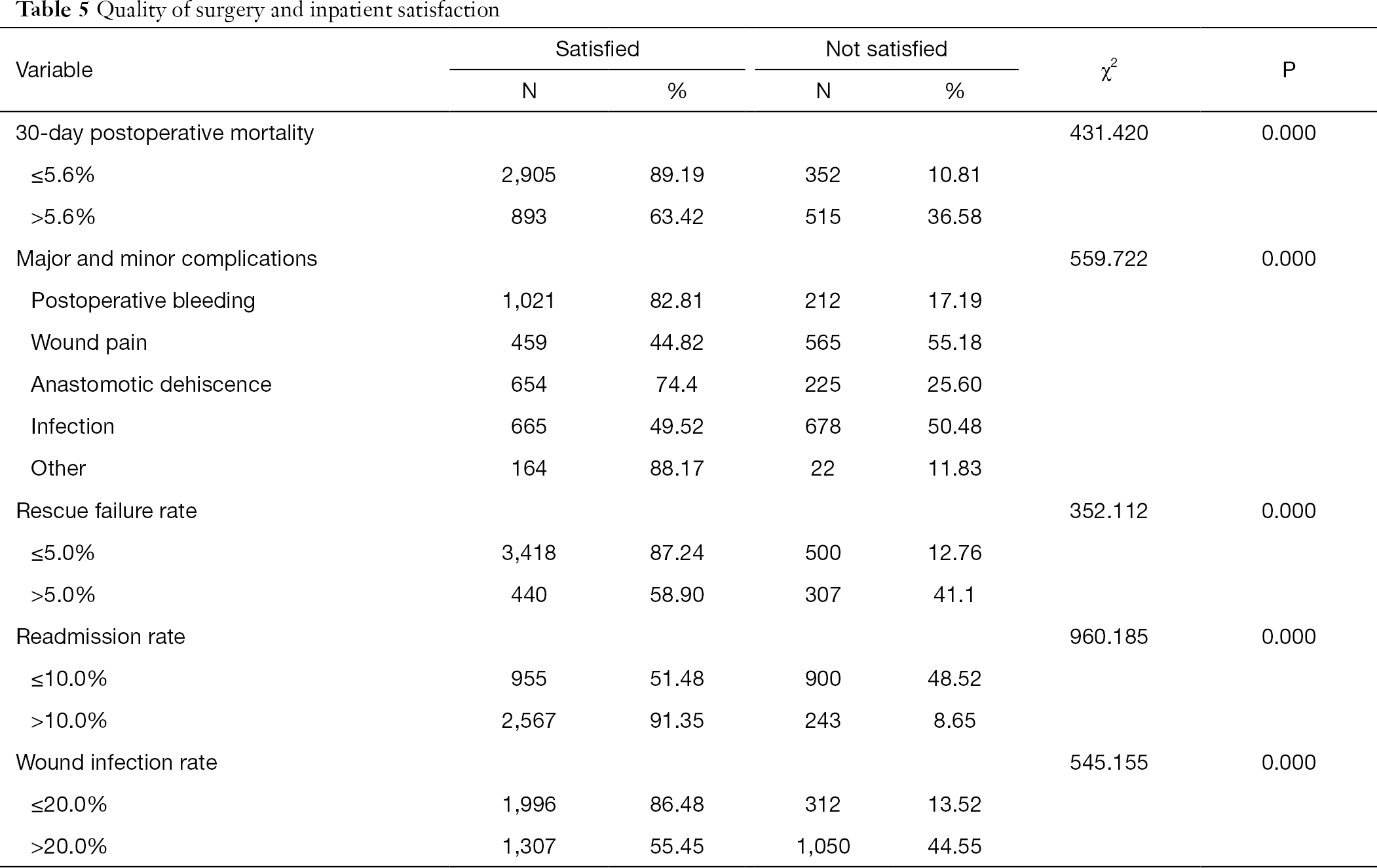 The overall satisfaction of inpatients was divided into binary dependent variables, such that “very dissatisfied,” “dissatisfied,” and “general” were set as 1, and comprised the dissatisfied group, and “satisfied” and “very satisfied” were set as 2, and comprised the satisfied group. A univariate analysis was undertaken to examine inpatient satisfaction in relation to inpatients’ demographic sociological characteristics, hospitalization perceptions and the quality of surgery. 15 factors thought to affect overall inpatient satisfaction were used as independent variables, and defined and assigned values (see Table 6). A binary logistic regression analysis was also performed, the results of which are set out in Table 7. 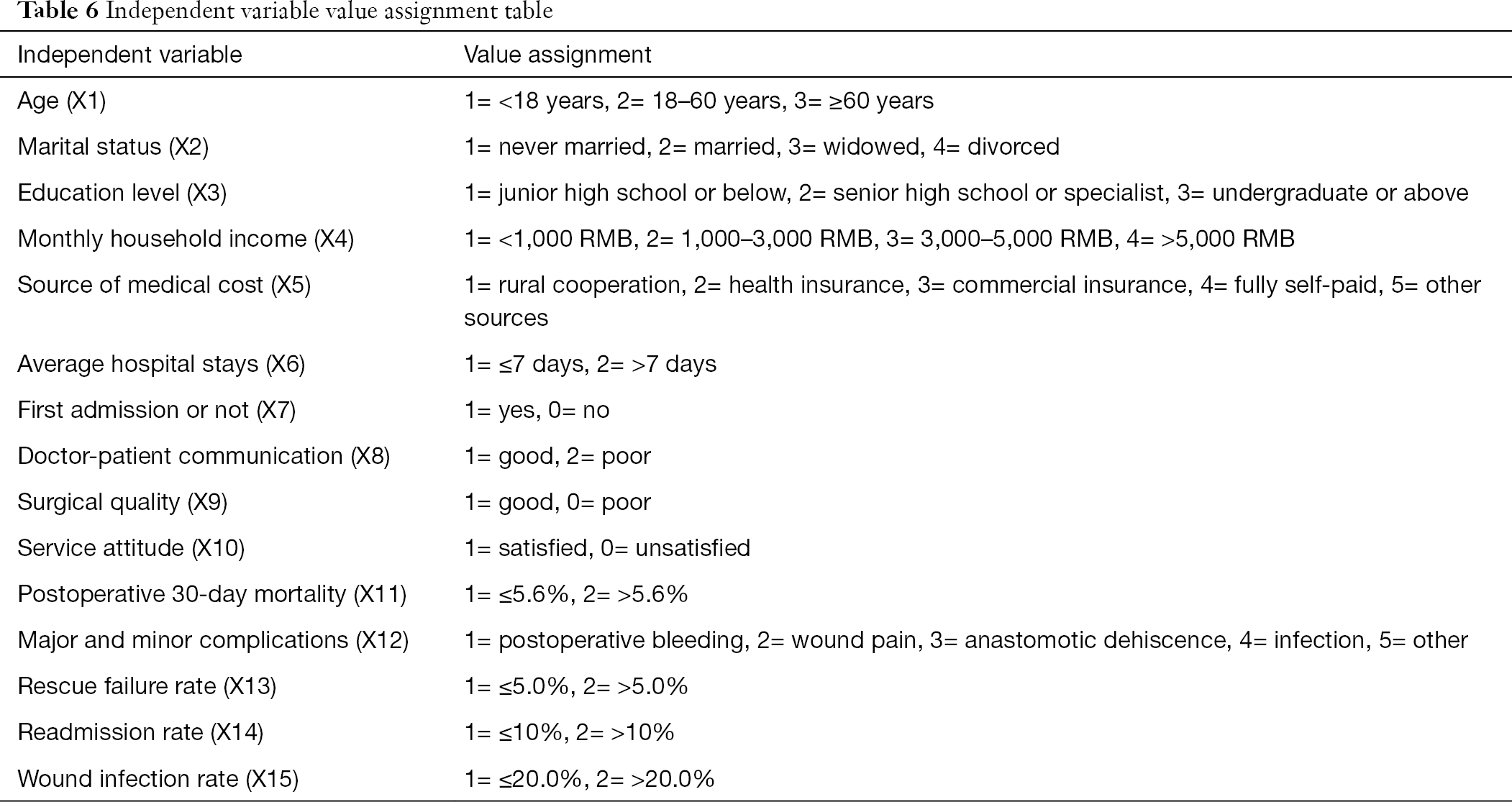 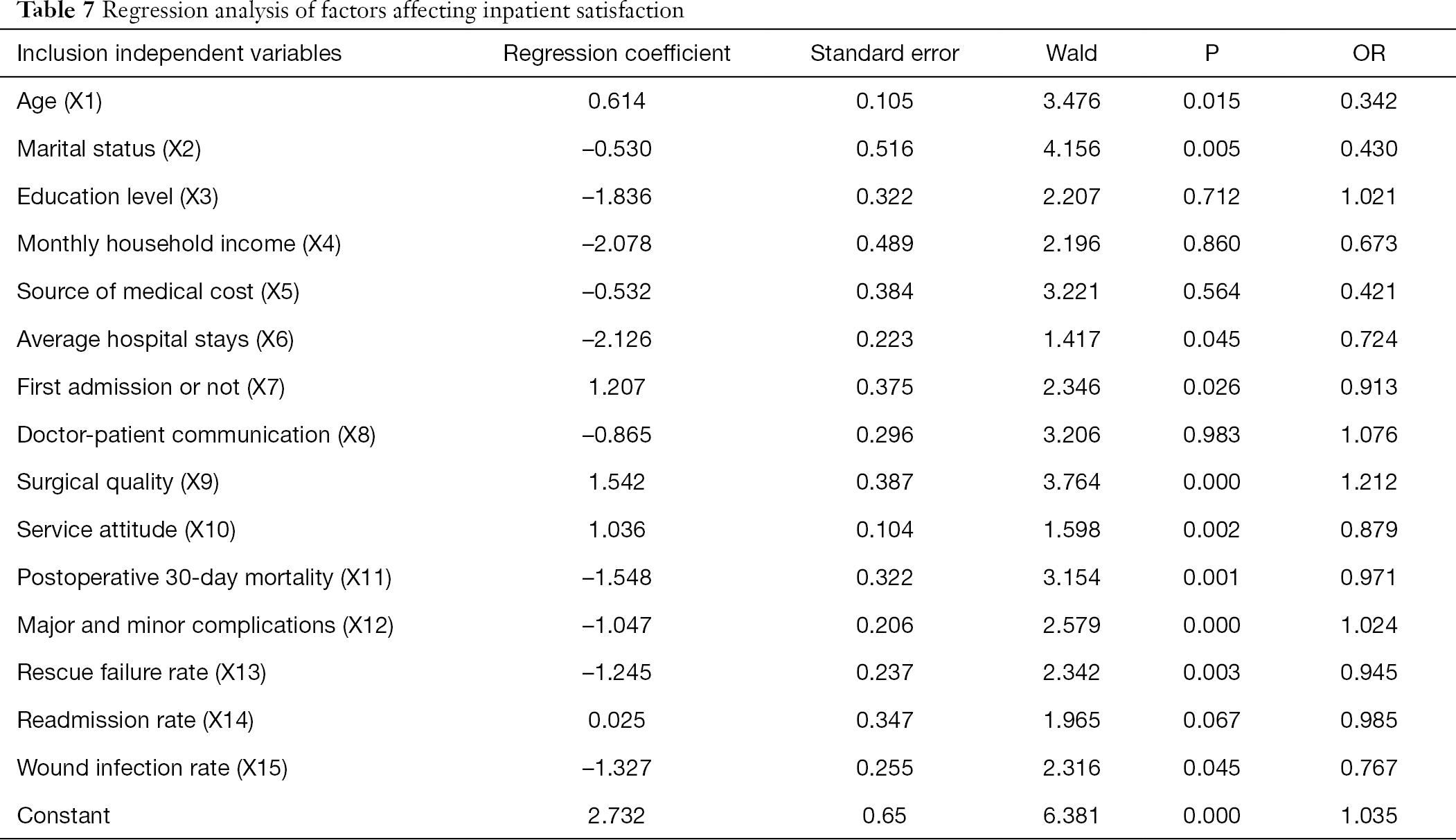 In this study, we administered a random sampling questionnaire to inpatients at 10 tertiary A care hospitals in Chongqing, and analyzed and compared the various factors affecting inpatient satisfaction, and the relationship between inpatient satisfaction and the quality of surgery. The results showed that inpatients had a high overall level of satisfaction with hospitalization (88.7%), which is consistent with the high overall level of satisfaction (92.9%) found in the study by Smith et al. (18). There were some links between the demographic sociological characteristics of inpatients, their perceptions of hospitalization, factors related to the quality of surgical procedures, and the satisfaction of inpatients in this study. A univariate analysis revealed significant statistical differences in factors such as age, marital status, education level, family income, source of medical costs, the average length of the hospital stay, whether it was a patient’s first admission or not, doctor-patient communication, the quality of surgery, service attitude, 30-day postoperative mortality, major and minor complications, the rescue failure rate, the readmission rate, and the incision infection rate.

Service attitude was also found to be a factor affecting the satisfaction of inpatients. Specifically, the results showed that the better the service attitude, the higher the level of patient satisfaction. This finding is consistent with Shan’s observation that the trust of medical institutions should be increased, and doctor-patient relationships should be a priority (24).

This study has a number of limitations. First, the relationship between satisfaction and surgical quality was only studied in inpatients at 10 tertiary A hospitals in Chongqing. Second, the sample size may also have some limitations. Third, only the satisfaction of inpatients was examined; thus, no comparisons could be made in relation to inpatients and outpatients. Future studies will seek to address this issue.

In summary, this study investigated the satisfaction of 5,000 inpatients at 10 tertiary A hospitals in Chongqing, and found that 88.7% of inpatients were generally satisfied with the hospitals they were in. The analysis showed that 3 factors were related (i.e., demographic characteristics, hospitalization perceptions, and surgical quality), and that there was a certain relationship between inpatient satisfaction and above factors. Among these factors, the average length of the hospital stay, postoperative 30-day mortality, major and minor complications, the rescue failure rate, and the incision infection rate in surgical quality indicators were particularly important in relation to patient satisfaction. Thus, hospitals should seek to improve surgical quality to increase the satisfaction of inpatients. The investigation and analysis of this paper provide some data on the relationship between inpatient satisfaction and surgical quality indicators, and could be used to improve the quality of medical and health institutions.

Funding: This work was supported by the Humanities and Social Sciences Fund Project of Army Medical University for The Analysis on the Mining and Implementation Path of Ideological and Political Elements in Professional Management Courses (2020XRW07).

Reporting Checklist: The authors have completed the SURGE reporting checklist. Available at http://dx.doi.org/10.21037/gs-21-289

Conflicts of Interest: All authors have completed the ICMJE uniform disclosure form (available at http://dx.doi.org/10.21037/gs-21-289). The authors have no conflicts of interest to declare.

Ethical Statement: The authors are accountable for all aspects of the work in ensuring that questions related to the accuracy or integrity of any part of the work are appropriately investigated and resolved. All procedures performed in this study involving human participants were in accordance with the Declaration of Helsinki (as revised in 2013). The study was approved by ethics board of Army Medical University (No.: IRB-2019-12) and informed consent was taken from all the patients.