According to clinical data, SC appears to have a specific anatomic preference for the ocular region, especially the eyelids. It has been estimated that approximately 25% of SC occur in extra-orbital sites, approximately 70% of which are in the head and neck regions (7,8). Intraoral SC is an exceedingly rare neoplasm. To date, only 10 cases appear to have been reported in the English literature. It has been reported that SC occurs in the buccal mucosa, labial mucosa, anterior mouth floor, and tongue (see Table 1) (3-6,9-14). This paper reports the first intraoral case of SC involving the soft palate. It also provides a brief review of the literature, and discusses the histogenesis, differential diagnosis, and clinicopathological features of this disease. 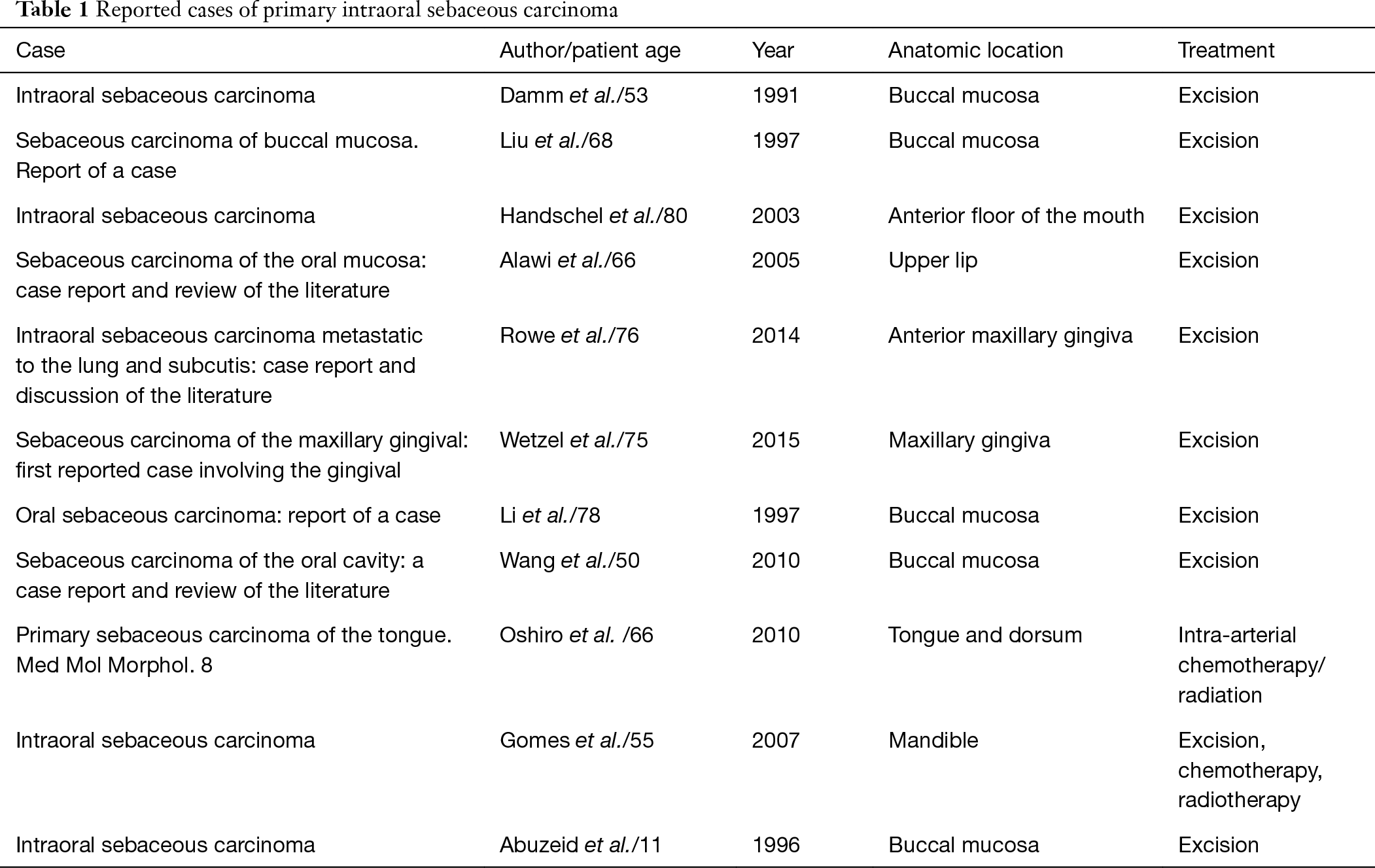 We present the following article in accordance with the CARE reporting checklist (available at http://dx.doi.org/10.21037/gs-21-218).

All procedures performed in studies involving human participants were in accordance with the ethical standards of the institutional and/or national research committee(s) and with the Helsinki Declaration (as revised in 2013). Written informed consent was obtained from the patient for publication of this study and any accompanying image.

In April 2015, a 62-year-old female presented with a growth in her palatal, which had first appeared approximately one year ago. Initially, a small nodule (0.5 cm × 0.5 cm) appeared beneath the mucosa; however, it gradually grew to its present size of 2.0 cm × 1.5 cm, and had become painful. The patient had received antibiotic treatment, but the volume of the growth had not reduced, and the pain was not relieved. She had no similar growth elsewhere on her body, and had undergone no surgical excision previously. Additionally, no histories of any similar diseases had been discovered in her family. She did not use alcohol or tobacco.

A computerized tomography (CT) scan showed a mass, 2 cm × 1.3 cm in size, beneath the hard palate, and the adjacent bones showed oppressive absorption (see Figure 1). Upon physical examination, a markedly exophytic, irregularly shaped mass, 2 cm × 3 cm in size, was located at the juncture of the soft and hard palates. The lesion was mildly tender upon palpation, but Fordyce granules were not noticed in the intraoral lesions, and no regional lymphadenopathy was observed in the drainage area. A further CT scan showed a soft mass, no more than 1.8 cm × 2.5 cm in size, in the right soft palate, and the adjacent maxillary sinus bone was absorbed. A fine-needle aspiration (FNA) and histological examination were then performed, no valuable cells were detected. A diagnosis could not be made; however, a low-grade malignant tumor was suspected based on the CT findings and clinical conditions.

Figure 1 CT images of the mass, which was located in the right maxilla near the alveolar bone where nearby bone had been absorbed. CT, computerized tomography. From (A) to (F) show several CT planes in a row to reflect the location, size and nearby anatomical structure of the lesion (preoperative and intraoperative intraoral photos were not taken because the disease was so rare before surgery).

During surgery, the tumor was found to have invaded the underlying bone, but there was no definite evidence of angiolymphatic or perineural invasion. The tumor was resected along with a 1 cm range of healthy tissue, including tissue from the alveolar ridge of the upper jaw, part of the hard palate, and some muscle. During the surgery, a frozen-section examination indicated that squamous epithelial sections were negative for tumor, and the oroantral fistula was covered with a local flap.

The palatal specimen contained an ovoid mass with a maximum size of 2.5 cm. Grossly, the tumor was fulvescent-brown in color with nest invasive cells (see Figure 2A). Under a low-power lens, the nests of large polygonal cells were observed to have centrally located prominent nuclei and the clear cytoplasmic vacuoles were surrounded by the basaloid cells, indicating sebaceous differentiation (see Figure 2B,C,D). Due to compression from the intracytoplasmic vacuoles, the scattered nuclei were observed to have a scalloped appearance. Further, typical and atypical mitotic images were observed throughout the lesion (see Figure 2E,F).

Histologically, sebaceous neoplasms of the salivary glands are divided into the following 5 categories: sebaceous adenoma, sebaceous lymphadenoma, SC, sebaceous lymph adenocarcinoma, and sebaceous differentiation in other tumors (15). By definition, SC is a cytologically and/or architecturally malignant tumor characterized by exclusive sebocyte differentiation (16). It commonly occurs in the head and neck regions (75%), especially the eyelids, but infrequently appears on the scalp or other areas of the face. Conversely, extraocular maxillofacial SC occurs much less frequently, and most reported cases have involved the major salivary glands (i.e., the parotid glands) (17). A comprehensive literature review identified only 10 cases of intraoral SC, of which the primary sites reported in the English literature were the buccal mucosa, mouth floor, upper labial mucosa, and tongue (see Table 1). Thus, this appears to be the first case of SC involving the soft palate.

The pathogenesis of intraoral SC is mysterious and requires further elucidation. Some scholars view that the primary occurrence of SC is associated with the salivary tissue in the mouth cavity; sebaceous differentiation of the salivary tissue has been found in as many as 42% of the common parotid glands (18). Conversely, it has also been hypothesized that intraoral SC might be caused by the malignant transformation of ectopic sebaceous glands, also known as Fordyce granules (3-6). Notably, it has been theorized that sebaceous cells are contained in 10–40% of the parotid glands and 6–10% of the submandibular glands (16,19,20). Somewhat confusingly, Fordyce granules have been discovered in 80% of oral mucosa, but SC develops much more frequently in the major salivary glands than in the oral cavity (1,2). Further, sebaceous differentiation has been noted in squamous epithelium due to inflammation (16). Fordyce granules are common in the oral mucous membrane; however, somewhat strangely, SC is very rare in the oral cavity. Notably, Fordyce granules were not found in this case. Given these findings, it appears that there might be another possible cause for intraoral SC. However, as so few cases have been reported, the precise pathogenesis remains unclear.

Due to an absence of specific biomarkers and simulated characters, histochemistry and immunohistochemistry form the diagnostic standard of SC. Thus far, microscopic examinations aided by special stains (e.g., Oil Red O and Sudan IV) form the primary basis for a diagnosis of SC in academic circles. In the present case, a low-grade malignant tumor was suspected according to the CT scans, preoperative FNA, and clinical conditions. Other carcinomas, including acinar cell carcinoma (ACC), basaloid cell carcinoma (BCC), SCC, mucoepidermoid carcinoma, and epithelial-myoepithelial carcinoma (EMC), were also considered before surgery. Massive vacuolated cells were seen in the hematoxylin and eosin stain (H&E) section, which were normal in clear cell melanoma, SCC with clear cell change, SC, and mucoepidermoid carcinoma. The postoperative histological examination did not specifically lead to the identification of the type of this malignancy, but it was strongly suggestive of SC.

In the present case, due to the rare occurrence of the tumor and no preoperative suspects, a fresh sample was not kept, causing the missed stain of Oil Red O and Sudan IV. Due to similar conditions arising in other cases and tests failing to completely solve diagnostic dilemmas, timely diagnoses cannot always be made (21-23). In such cases, several other immunohistochemical markers can be assessed to determine their potential roles in the process of the SC and differential diagnoses, such as PAS, CK, EMA, p63, p53, S-100, calponin, CD117, Ki-67, a-SMA, and AR. As Mulay showed, Ki-67, P53 and CK were positive in the cases of SC, SCC, and BCC (24). However, in the present case, the tumor was positive for CK, CK5/6, and P53, but negative for CK20 and Ki-67. As the diagnostic use of CK and Ki-67 is controversial, other proofs were needed to verify a final diagnosis.

Rather than believing that basaloid and sebaceous cells show powerful nuclear immunoreactivity with ARs and separate membranous and cytoplasmic reactivity with EMAs, Carolina et al. viewed ARs as a better marker of sebaceous differentiation than EMA. Additionally, studies have also shown that SC can be negative for PAS and S100 but positive for EMA, and thus can be distinguished from other tumors (14,24-26). To replicate those test results, the biomarkers of PAS, S100, AR, and EMA were tested. Similar findings were observed in the present case (i.e., that PAS and S100 were negative). Notably, the postoperative immunohistochemical test showed that the tumor cells in the present case indicated positivity for both EMA and AR, which confirmed that the vacuolated clear cells were not mucus cells or squamous cells containing rich glycogen. Based on these findings, SCC, clear cell melanoma, and BCC were precluded before the final SC diagnosis.

The rarity of the neoplasm indicates that it is necessary to establish optimal treatments. In most cases, surgical treatments have been adopted. Postoperative irradiation, chemotherapy, and immunosuppressive treatment are controversial; however, they have also been adopted in metastasis cases. As Table 1 shows, surgery was undertaken in 8 cases, while assisted chemotherapy and/or radiotherapy were administered in the remaining cases.

An infrequent SC in a patient’s palate was observed. Radical surgery was carried out. A preoperative diagnosis indicated a myoepithelial tumor or possibly a mucoepidermoid carcinoma. The infrequency and unfamiliarity of SC resulted in the loss of fresh samples, and created difficulties in the differential diagnosis. The histogenesis, differential diagnosis, and clinicopathologic conditions of this disease in the literature were reviewed. As a rare malignant tumor, SC should be distinguished from other tumors full of vacuolated clear cells. Additionally, all of the possible useful biomarkers, such as Ki-67, P53, CK, PAS, S-100, EMA, and AR, were listed to help verify the diagnosis. Previous cases in the English-literature and the present case suggest that in addition to stains of Oil Red O and Sudan IV, positive immunohistochemical stains of Ki-67, P53, EMA, and AR and negative immunohistochemical stains of PAS and S100 can also be helpful in verifying a diagnosis of SC. Notably, the role of CK in the differential diagnosis was ambiguous. Postoperative chemotherapy and radiotherapy were not adopted in the present case, as the postoperative pathology showed negative tumor margins, and there was no evidence of lymph node metastasis, the patient was relatively satisfied with the surgery.

Reporting Checklist: The authors have completed the CARE reporting checklist. Available at http://dx.doi.org/10.21037/gs-21-218

Conflicts of Interest: All authors have completed the ICMJE uniform disclosure form (available at http://dx.doi.org/10.21037/gs-21-218). The authors have no conflicts of interest to declare.

Ethical Statement: The authors are accountable for all aspects of the work in ensuring that questions related to the accuracy or integrity of any part of the work are appropriately investigated and resolved. Written informed consent was obtained from the patient for publication of this study and any accompanying image. All procedures performed in studies involving human participants were in accordance with the ethical standards of the institutional and/or national research committee(s) and with the Helsinki Declaration (as revised in 2013).