The effect of atrial fibrillation on perioperative outcomes in patients with pancreatic cancer undergoing open pancreaticoduodenectomy: analysis of the National Inpatient Sample

Atrial fibrillation (AF) is the most common arrhythmia (1–2% in the general population) (4), and it is associated with increased perioperative mortality and morbidity (5). Several studies have demonstrated that AF is related to higher mortality and morbidity, as well as more perioperative complications (6,7). However, there has been paucity of literature evaluating the impact of AF on patients with pancreatic cancer undergoing OPD, especially large-scale studies. Therefore, we carried out this study, in the hope of exploring our knowledge in this field.

We presented the following study in accordance with the Strengthening the Reporting of Observational Studies in Epidemiology (STROBE) reporting checklist (available at https://dx.doi.org/10.21037/gs-21-116) (8).

Supported by the Healthcare Cost and Utilization Project (HCUP), the National Inpatient Sample (NIS) is one of the largest inpatient administrative databases in the U.S. It represents approximately 20% of hospitalization in the USA, and it extracts data of nearly 8 million hospital discharges from more than 1,000 hospitals per year. The diagnosis and procedure codes in NIS database are based on the International Classification of Diseases, Ninth Revision, and Clinical Modification, Ninth Revision (ICD-9-CM). The NIS contains over 100 patient level data elements (demographic, diagnostic, and procedural) as well as hospital data such as location, median income of patients by zip code, teaching status, etc. Data from 2012 to 2014 were investigated. The study was conducted in accordance with the Declaration of Helsinki (as revised in 2013). This study was exempt from institutional review board evaluation of Beijing Friendship Hospital, Capital Medical University and informed consent was not required because this study was based on the NIS database, which includes fully anonymized and de-identified data.

We searched for patient discharge data (ICD-9-CM) and hospital characteristics of patients ≥18-year-old during years 2012–2014. The population of interest in this study was patients who underwent OPD, identified by ICD-9-CM procedure code 52.7. Robotic assisted procedures (ICD-9 procedure code 17.4) and laparoscopic procedures (ICD-9 procedure code 54.21) were excluded. Non-elective procedures were also excluded. Patients were then stratified into 2 groups based on the presence of AF (ICD-9-CM code 427.3). Patient demographics (age, sex, income), hospital characteristics (location, teaching status and size) and common comorbidities were identified with ICD-9-CM codes (Table S1). Patients with missing data were excluded from our analyses.

Descriptive statistics was used to compare demographic characteristics and outcomes between OPD patients with and without AF. The baseline characteristics were compared between the AF group and control group using the Chi-square test for categorical variables and Student’s t-test for continuous variables. In our multivariable regression model, we assessed differences in binary outcomes by using logistic regression [logistic command in Stata (StataCorp)] and in continuous outcomes by using linear regression (Stata command regress). All above were carried out in weighted samples. 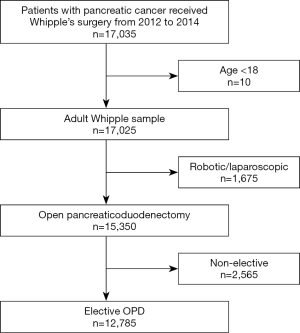 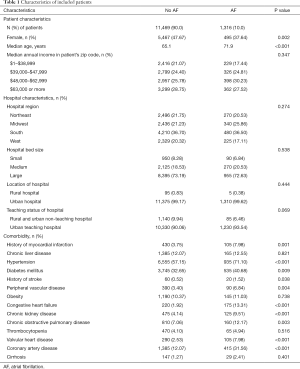 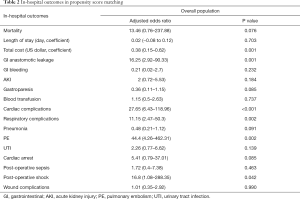 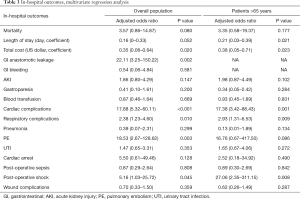 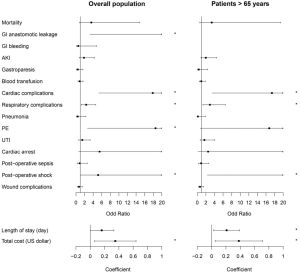 PD is the currently the standard surgical treatment for tumors in the head of the pancreas, the lower end of the common bile duct, the duodenal papilla, and certain benign lesions. Currently the perioperative mortality of PD is less than 5% (9-12), however, the incidence of perioperative complications can be 27.1% or higher (13). Despite the advances in technology, the prognosis of PD remains poor, with 5-year survival rate being only 16–20% (14-16). Nonetheless, with upcoming new chemotherapy regimens, we might be expecting better survival outcomes in the near future (17,18). Common complications of PD include pancreatic fistula, bile leakage, GI anastomotic leakage, GI bleeding, AKI, gastroparesis, cardiac complications, respiratory complications, UTI, postoperative sepsis, postoperative shock, wound complications, etc. (19,20) Previous studies have shown that perioperative complications plays an adverse role on survival and prognosis in various tumor types including esophageal cancer (21), gastric cancer (22) and colorectal cancer (23), while this holds true in pancreatic cancer also (20).

AF is the most common type of arrhythmia (4), with a prevalence of 1–2% in the general population. Patients with AF are at a higher risk of thrombo-embolic disease and they were commonly placed on long term anticoagulation therapy (24). It has been reported that AF is associated with significantly higher occurrence of perioperative complications in various surgical operations, including urinary system surgery, liver transplantation, etc. (6,7,25).

To the best of our knowledge, this is the first large-database, population-based study investigating the impact of AF on the outcomes of pancreatic cancer patients with OPD. The reports on mortality of PD varies in various studies. Cameron et al. summarized 1,000 consecutive PD and found that only 10 postoperative deaths, for a mortality of 1% (26). Kneuertz et al. reported that the 30-day mortality after PD was 2.9% (27). Our study found that from 2012 to 2014, the average overall in-hospital mortality was 3.17%, while 7.6% and 2.66% in the AF group and non-AF group, respectively. Though no statistical significance was found (adjusted OR 3.57, 95% CI: 0.86–14.87, P=0.08), this three-fold trend might suggest potential clinical significance.

In regards to utilization of hospital resources, we found that LOS was longer in AF group in unadjusted data, but no significant difference was found after multivariate analysis [14.6 vs. 11.8 days, adjusted coefficient 0.16 (0–0.33), P=0.052]. There was a significant difference in cost between the two groups [54,601.47 vs. 38,812.80 dollars, adjusted coefficient 0.35 (0.06–0.64), P=0.02]. Adjustment of anticoagulant and a thorough evaluation of cardiac function like echocardiography and exercise tolerance test might be connected to the cost increase. What is more, higher incidence of perioperative complications such as gastrointestinal anastomotic leakage, cardiac complications, respiratory complications, pulmonary embolism, and perioperative shock in AF group might contribute to the higher expenditure.

Regarding complications after PD, Kumar et al. (28) found that pulmonary complications were the leading cause for mortality after PD. Other causes of death include bile sepsis, liver failure, myocardial infarction, pancreatic leak, etc. Narayanan et al. (29) showed that the most common cause of death after PD within 90 days is multisystem organ failure, followed by post-pancreatectomy hemorrhage, and cardiopulmonary arrest from myocardial infarction or pulmonary embolus. Our study found that the AF group had more perioperative complications than the non-AF group, including GI anastomotic leakage, cardiac complications, respiratory complications, PE and postoperative shock. Among all complications, the incidence of GI anastomotic leakage in the AF group was approximately 22 times higher than that in the non-AF group. The causality is unclear and further studies would be warranted.

The NIS database cannot determine the amount of bleeding, therefore, we tried using blood transfusion as a suboptimal measure to indirectly identify intraoperative bleeding. On the other hand, the post-operative shock was not limited to hemorrhagic, but also cardiogenic shock (possibly related to cardiac complications) and septic shock (possibly related to GI anastomotic leakage). In our result, we got significantly more incidence of post-operative shock in AF group than the non-AF group, yet no statistical difference in blood transfusion was found between the two groups. We suspected that the cause of post-operative shock in AF group is more cardiogenic and / or infectious than hemorrhagic, however this is only correlation not causality limited by the retrospective character of our study.

With the advancement of surgical techniques, an ever increasing number of elderly pancreatic cancer patients with complex comorbidities have received PD. Several studies have shown that age has an important adverse effect on the occurrence of perioperative complications and survival after PD (31,32). Therefore, we further analyzed patients aged >65 years. No significant difference was found in mortality, while there was significant difference between the two groups in LOS and cost. As for complications, the differences in various complications between the AF group and the non-AF group in the older population are similar to the overall population. It can be seen that although age will increase complications and mortality, it will increase evenly between the two groups. Further studies are needed to reveal the influence of age on perioperative complications and death after PD.

For patients with atrial fibrillation who take warfarin orally, omitting warfarin for 5 days before surgery and checking the INR on the day before surgery has been recommended (33,34). The use of bridging while holding oral anticoagulants has become common clinical practice, though some current evidence argue that bridging may not significantly reduce thromboembolic events, yet increasing major adverse cardiovascular events and bleeding (35,36). Douketis et al. concluded that forgoing bridging anticoagulation was noninferior to perioperative bridging in patients with atrial fibrillation (37). According to the ACC Expert Consensus, if the patient’s thrombosis risk is low (CHA2DS2-VASc Score ≤4), bridging is not recommended; if the patient’s thrombosis risk is medium-to-high (CHA2DS2-VASc Score 5 and above) or with prior stroke or TIA, clinical judgment need to be used (33). For patients who have previously taken apixaban or rivaroxaban, it is suggested that the anticoagulants should be omitted 2–3 days before surgery and bridging is not required (33,38). However, there has been limited evidence regarding bridging, specifically for pancreatic cancer patient, in the 2017 ACC periprocedural management of anticoagulation guideline. In this case, if a complicated case is encountered, multidisciplinary team approach involving cardiologists and anesthesiologists would likely be beneficial.

There are several limitations of the present study. First of all, our study is a retrospective study based on the NIS database with all inherent shortcomings. Secondly, because NIS is an inpatient database coding with ICD-9-CM, complications without ICD-9 code, such as pancreatic fistula, bile leakage, cannot be analyzed. In addition, tumor information such as tumor type, stage, and neoadjuvant chemotherapy is absent in the NIS database, which may have an impact on the outcomes of OPD. Finally, as the follow-up information is not included within the NIS database, the postoperative outcomes is not discussed in this study. Despite these limitations, this is the first population-based study that investigated the impact of AF on the outcomes of pancreatic cancer patients undergoing OPD, providing surgeons data and serving as a basis for future prospective studies.

Funding: This work was supported by National Natural Science Foundation of China (No. 81172318).

Reporting Checklist: The authors have completed the STROBE reporting checklist. Available at https://dx.doi.org/10.21037/gs-21-116

Conflicts of Interest: All authors have completed the ICMJE uniform disclosure form (available at https://dx.doi.org/10.21037/gs-21-116). The authors have no conflicts of interest to declare.

Ethical Statement: The authors are accountable for all aspects of the work in ensuring that questions related to the accuracy or integrity of any part of the work are appropriately investigated and resolved. The study was conducted in accordance with the Declaration of Helsinki (as revised in 2013). This study was exempt from institutional review board evaluation of Beijing Friendship Hospital, Capital Medical University and informed consent was not required because this study was based on the NIS database, which includes fully anonymized and de-identified data.