We present the following case in accordance with the CARE reporting checklist (available at https://dx.doi.org/10.21037/gs-21-65).

A 40-year-old female was admitted to our clinic for the operation of a retroperitoneal mass incidentally discovered 2 months ago. The medical, family and psycho-social history were unremarkable. She was asymptomatic, and physical examination showed a slight distention of the abdomen with no other obvious positive signs. The results of biochemistry and tumor markers including CA19-9, CA12-5, CA24-2, CA72-4, CA15-3, CEA, AFP were within normal ranges.

According to imaging studies, including CT and MRI, she was found to have a retroperitoneal 12.1 cm × 10.0 cm mass showing fat density, irregular morphology and unclear boundary. There were hyper-density, nodular and enhanced soft tissue components inside. A three-dimensional reconstruction CT was performed and revealed a large tumor posterior to the pancreas and duodenum which were compressed and pushed forward (Figure 1). Thin and uniform separations were observed (Figures 1A,2A). Lesion was behind the superior mesenteric arteriovenous (Figure 1), encasing the aorta and the left superior renal artery and displacing the inferior vena cava (Figure 2). It was adherent to the left adrenal gland, left kidney, left renal pelvis and surrounding vessels including proximal superior mesenteric artery, left and right renal artery, and root of bilateral reproductive vein. Obviously thick and round reproductive veins were shown on both sides. Mild 18F-fluorodeoxyglucose (18F-FDG) uptake was observed in the neoplasm (Figure 2A) as well as the retroperitoneal lymph nodes (Figure 2B). 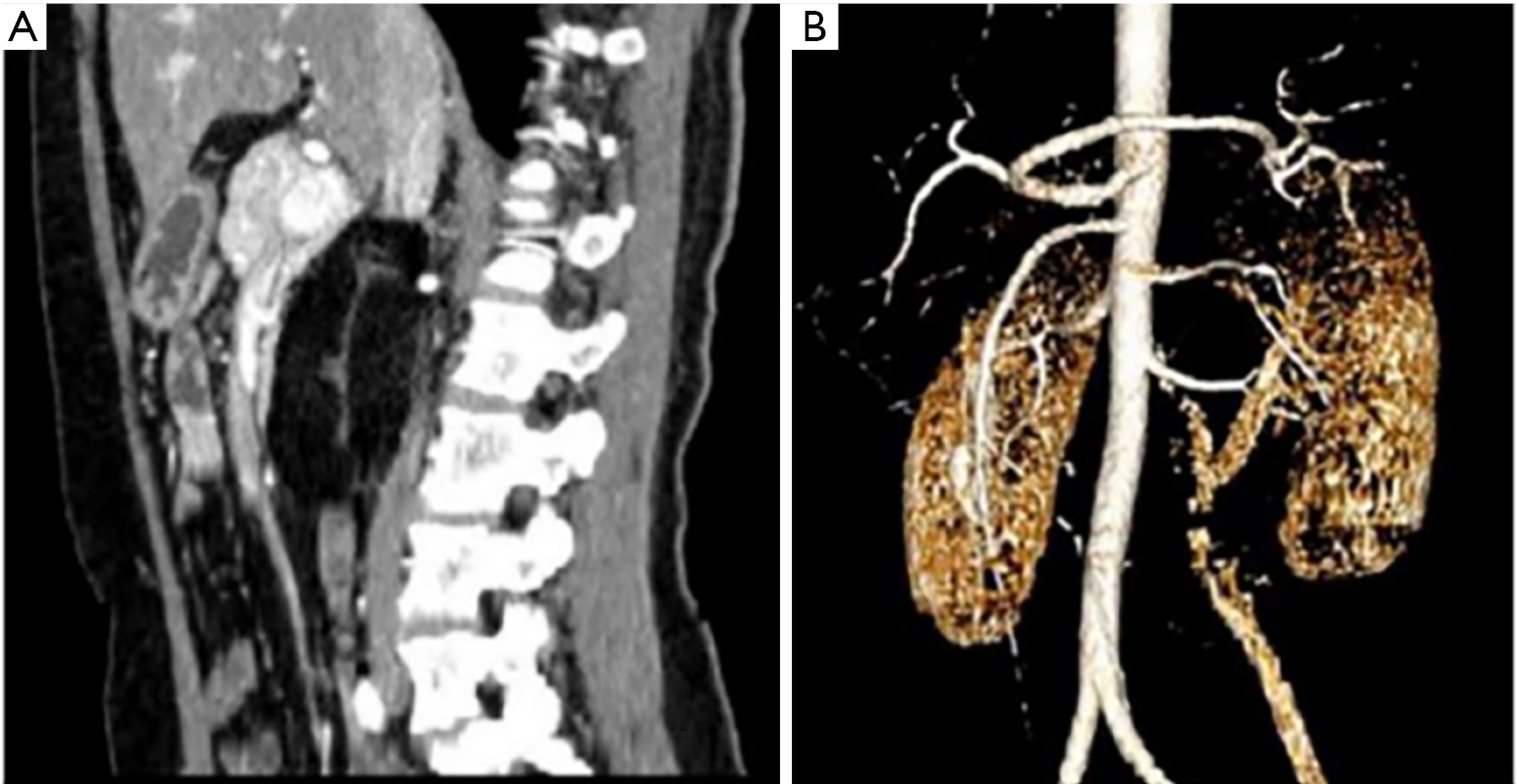 Figure 1 Image of enhanced computerized tomography (CT). (A) In the sagittal plane, a large tumor was posterior to the pancreas and duodenum which were compressed and pushed forward. Thin and uniform separations were observed. (B) Three-dimensional reconstruction showed that the lesion was behind the superior mesenteric arteriovenous.

A needle biopsy was difficult to perform because of the deep position in retroperitoneal space. For retroperitoneal fatty or cystic neoplasms, the differential diagnosis includes lipomyoma, liposarcoma, lymphangiocyst, bronchogenic cyst, cystic mesothelioma, cystic teratoma and so on. Except for liposarcoma, all other lesions are mostly benign without increased 18F-FDG uptake in PET-CT. In addition, liposarcoma is the most common lesion, especially in adult. Teratomas usually present with calcification, and mainly occur in children and adolescent. Combined with the imaging features, location, incidence, and age of the patient, a primary diagnosis of liposarcoma was considered. The patient had been to three hospitals in total, and transferring to a higher authority hospital was always recommended due to the difficulty of the therapy. She was eager to have an operation.

The patient was informed of the possibility of incomplete tumor excision, left adrenal and left kidney resection, and high risk of recurrence of liposarcoma. Coupled with the relatively young age and absence of symptom, the option of expectant treatment was also provided. The patient finally chose surgical treatment. Bilateral Double J tubes, ureteral stents which were used to identify and protect the ureter, were implanted before surgery. Laparotomy and open surgery transit through a left vertical incision were then performed. The neoplasm was at the posterior of the pancreatic and duodenum with an intact capsule. When the left vertical incision was performed, the left renal hilum area was fully exposed and protected. The neoplasm was excised entirely.

The macroscopic examination revealed a mass composed of fat components and 2 cystic cavities, with a complete capsule (Figure 3). Greasy secretions and hair were observed. Microscopically, the cyst was lined by squamous epithelium with keratinized materials and skin appendages including sebaceous gland and hair follicles (Figure 4). The tumor was pathologically considered as a dermoid cyst. No obvious complications occurred. During a 2-month follow-up, the patient recovered well without discomfort and recurrence. 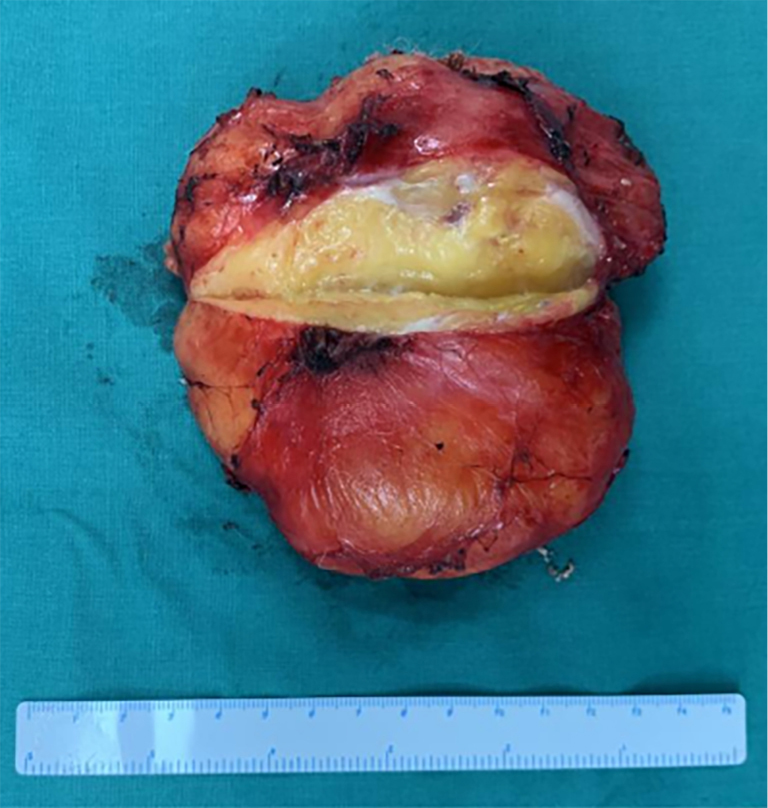 Figure 3 On gross examination, the mass was composed of fat components with greasy secretions and hair. The surface was intact. 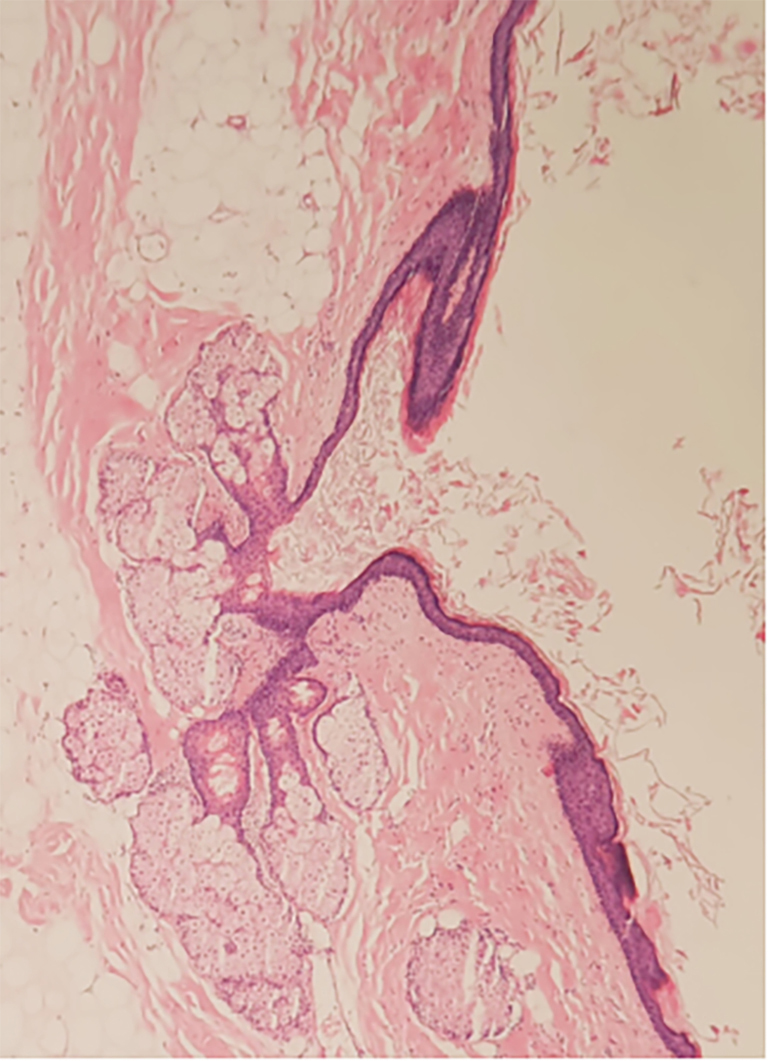 Figure 4 On histopathologic examination (Haematoxylin and Eosin, ×40), the cyst was lined by squamous epithelium with keratinized materials and skin appendages including sebaceous gland and hair follicles. It was pathologically considered as a dermoid cyst.

All procedures performed in studies involving human participants were in accordance with the ethical standards of the institutional and/or national research committee(s) and with the Helsinki Declaration (as revised in 2013). The study was approved by Ethics Committee of Peking Union Medical College Hospital (HS-1219). Written informed consent was obtained from the patient.

Comparison between dermoid cyst and liposarcoma in clinical and imaging features

Dermoid cyst, also known as mature cystic teratoma, are benign tumors derived from embryonal tissue and are composed of somatic cell types from only one germ layer (1). After complete surgical excision, the overall 5-year survival rate is nearly 100% (4). However, liposarcoma is highly malignant, with an overall 5-year survival rate of only 30–60%. For liposarcoma that is difficult to achieve negative resection margin (R0 and R1), which is a crucial prognostic factor, preoperative chemoradiotherapy is recommended according to NCCN guidelines (5). If the margin is positive, reoperation or adjuvant radiotherapy is necessary (5). It was reported that the recurrence interval of liposarcoma after operation is longer in professional retroperitoneal tumor treatment center (6). Therefore, transferring to higher authority hospital was constantly suggested for this patient, and poor prognosis was also informed. Early recognition is challenging, but has important significance for timely treatment, surgical preparation, prognosis evaluation, and preoperative education of the patient.

According to imaging findings, it is challenging to differentiate a dermoid cyst without calcification and other classic signs from liposarcoma in retroperitoneal space. Firstly, both dermoid cyst and liposarcoma can be regular and well-encapsulated (6). Secondly, both of them are composed of mainly fatty material, with possible mixed and various densities. Calcification, mostly bone components which originate from mesoderm (7,8), exits in almost 50% of teratomas (2). But it is rare in dermoid cysts which are exodermal. In liposarcoma, calcification can also be observed due to a variety of components like fibrosis, hemorrhage and necrosis (9). More importantly, in dermoid cysts, there can be thin and uniform separations (7), rather than linear, localized and irregular high density in liposarcoma (6). It is significant for differentiation. Thirdly, the soft tissue in benign dermoid cysts can also show an increased 18F-FDG uptake in positron emission tomography (PET)/computed tomography (CT) (10). It may be attributed to the glucose utilization as the energy source for the active epithelium secretion (10).

In this case, the three-dimensional reconstruction CT showed obvious enlargements of reproductive veins, suggesting that the mass might be developed from the reproductive system. However, it did not get enough attention due to the formed first impression of liposarcoma in the early stage of admission.

Mature cystic teratomas contains at least two germ cell layers. Dermoid cysts, containing only one germ layer, are very rare (7). Most retroperitoneal dermoid cysts reported were developed from at least two germ cell layers, but were also called mature cystic teratomas. The difference of the two diseases is yet to be clarified.

Conclusive data about dermoid cysts is insufficient, and most of them are reported as mature cystic teratomas. They are frequently characterized by a bimodal peak in incidence, occurring in the first 6 months of life and in early adulthood (7). Only 10–20% of them occur in adults more than 30 years of age (7). Retroperitoneal ones were usually misdiagnosed as adrenal tumors (11-13), pancreatic cysts (14), gastric stromal tumor (15) and so on. The majority of cases were asymptomatic (8,14), and the most common symptom was nonspecific pain (7,16). Patients whose adrenals were compressed might be present with vertigo and hypertension (13,16), making the diagnosis more confusing. The incidence of malignant transformation is approximately 3–6% (12). Besides squamous cell carcinoma which accounts for 75–87% (17), enteric differentiation (11), mucinous adenocarcinoma (18), sarcoma, melanoma (9) and ganglion neuroblastoma (16) were also reported. There was a retroperitoneal recurrence after the ovary dermoid cyst resection (18).

Histopathological analysis of dermoid cyst and the differential diagnoses

Dermoid cyst, epidermoid cyst and mature cystic teratoma are likely to be confused (1) (Table 1). In ICD-10 coding, the first two are dominated by “cysts”, while the last one is dominated by “teratoma” (1). It was shown in 2019 that in a hospital, 3.9% of the ICD-10 coding of these three diseases was wrong (1). The pathological characteristics are of vital importance to differentiation. For dermoid cysts and epidermoid cysts, both of them are lined with squamous epithelium. However, there are no skin appendages such as sebaceous glands, hair follicles, and hair only in epidermoid cyst. For mature cystic teratomas and dermoid cysts, the former contains at least two germ cell layers with a common appearance of calcification (12,14,17), while the latter is a single layer with rare calcification (7) and no scolex (1). Both of them are mainly composed of skin and skin appendages, so many clinicians used “mature cystic teratomas” to call them both (10-13) (Table 1). However, there is obvious difference in pathology and ICD-10 coding because of the number of germ cell layers and the presence of scolex (1).

In the treatment of dermoid cysts, there were 7 cases reported to have successful results with sclerotherapy (3). However, the content is often too pultaceous to aspirate, and the dermal component of the cyst wall still exists, implying a risk of cyst re-expansion (3). Sclerotherapy can thus be used for patients who cannot undergo operation, or as preoperative therapy to reduce the tumor volume (3). Teratomas are largely resistant to radiotherapy and chemotherapy, which are only used for those with malignant features (19). Surgical removal is the mainstay of treatment due to a potential risk of malignancy (3,10-12), and long-term follow-up is required. The number of veins and organs displaced and compressed by retroperitoneal mass is positively related to perioperative complications (20).

In this patient with retroperitoneal dermoid cyst, the surgical treatment was effective, safe and minimally invasive. Firstly, the tumor was behind the superior mesenteric arteriovenous. The angle of operation and surgical field of laparoscope had advantages in precisely undermining the posterior of the neoplasm where no major vessels go through. Secondly, the left margin of the tumor was closely related to the left renal hilum. Open surgery with a vertical incision on the left was then selected, in order to better expose and protect the integrity of the left kidney. More importantly, for large and transverse tumors, a traditional transverse or “inverted Y” incision is generally chosen. We believe the verticle left incision we performed could be minimally invasive in terms of injury of rectus abdominis, and was beneficial for patient’s recovery.

Reporting Checklist: The authors have completed the CARE reporting checklist. Available at https://dx.doi.org/10.21037/gs-21-65

Conflicts of Interest: All authors have completed the ICMJE uniform disclosure form (available at https://dx.doi.org/10.21037/gs-21-65). The authors have no conflicts of interest to declare.

Ethical Statement: The authors are accountable for all aspects of the work in ensuring that questions related to the accuracy or integrity of any part of the work are appropriately investigated and resolved. The study was approved by Ethics Committee of Peking Union Medical College Hospital (HS-1219). All procedures performed in studies involving human participants were in accordance with the ethical standards of the institutional and/or national research committee(s) and with the Helsinki Declaration (as revised in 2013). Written informed consent was obtained from the patient.