At present, a variety of computer imaging technologies have been used to identify lymph nodes, including Computer tomography (2). A conventional ultrasound is the preferred computer imaging technique for the clinical evaluation of axillary lymph node differentiation in breast cancer. The emergence of elastography technology has greatly compensated for the shortcomings of misdiagnoses and the high rate of missed diagnoses in conventional ultrasound technology (3). In recent years, virtual touch tissue imaging quantification (VTIQ) technology has become a popular research area in the field of computer ultrasound imaging, as it can accurately locate the region of interest and be used to undertake quantitative and qualitative analyses of lesions. VTIQ technology has been widely used in the diagnosis of liver and other organ diseases (4,5). To enhance treatment effects and improve the prognosis and quality of life of breast cancer patients, the use of computer imaging technology to identify the nature of axillary lymph node metastasis of breast cancer patients has great importance.

To be eligible to participate in this study, patients had to meet the following inclusion criteria: (I) have not undergone radiotherapy or chemotherapy at the time of the breast ultrasound examination; (II) have not undergone a breast biopsy before the breast ultrasound examination; (III) not be pregnant or lactating; and (IV) have complete clinical data and clear collected images, consistent with the requirements of the test. Patients were excluded from the study, if they met the following exclusion criteria: (I) had received a prosthesis implantation; (II) had undergone a breast abscess incision and drainage before diagnosis and treatment; (III) had a breast mass rupture or pus flow; and/or (IV) more than 30 days had elapsed between the ultrasonic diagnosis and the surgical treatment of the breast. All procedures performed in this study involving human participants were in accordance with the Declaration of Helsinki (as revised in 2013). The experimental procedure was approved by the ethics committee of the Hwa Mei Hospital of University of Chinese Academy of Sciences (IRB No. 2018-023), and all patients signed informed consent forms.

Diagnosis and evaluation method based on computer imaging technology

The Siemens Acuson S3000 with a 9L4 linear array probe (frequency 4–9 MHz) equipped with ultrasound elastography and VTIQ technology was used to undertake a conventional ultrasound, ultrasound elastography, and VTIQ examination of each of the patients. The patients assumed a supine or lateral position during the routine ultrasound examination of the breast and axillary lymph nodes. Index information of lymph node blood typing, blood flow classification, length diameter, and short diameter of the largest section of lymph node, cortical thickness (CT), and so on were collected and detected. The elastography function was turned on to obtain images for evaluation of each indicator. Switching to VTIQ technology, the VTIQ value of the same depth was obtained and the average value was taken.

The blood flow typing of lymph nodes was based on the evaluation method of Yang et al. (2020) (7). Under this method, Type I indicates no for blood (0 points), Type II indicates the gate of the lymphatic type (1 point), Type III indicates a peripheral type (2 points), and Type IV indicates a mixed type (3 points).

All of the examinations were conducted by two clinicians who held intermediate or higher titles. The clinicians adopted a double-blind examination method. In cases of disagreement, a meeting was held to discuss the diagnosis.

All of the patients were treated with modified radical mastectomy for primary breast cancer. Breast cancer tissues were taken from the patients, and 25 pieces of normal breast tissues were also taken to serve as a control group. Paraffin sections were then made. After a section was dewaxed, it was placed in a 1.5 mL sterilized centrifuge tube. After 1 mL of xylene was added to the mixture, the sections were centrifuged at 12,000 rpm for 2 min. The supernatant was discarded and the step was repeated twice. 1 mL ethanol was added and mixed well. The supernatant was discarded. The step was repeated twice. After digestion, the deoxyribonucleic acid (DNA) solution was obtained.

The obtained DNA solution was used as a template for HPV-DNA detection. The main steps included polymerase chain reaction amplification, DNA hybridization, and Luminex 200 detection. After mixing the amplified HPV-DNA solution with the configured buffer at a ratio of 4:1, it was placed in the sample hole containing agarose gel for amplification electrophoresis. If the signal of the HPV specific probe was greater than 150, the infection was positive, and if it was less than 150, the infection was negative.

SPSS19.0 software was used for the statistical analysis. The measurement data are expressed as mean ± standard deviation (). An independent sample t test was used for the analysis. The qualitative data were analyzed using the χ2 test. The differences between the diagnostic sensitivity (Se), specificity (Sp), accuracy (Ac), positive predictive value (PPV), and negative predictive value (NPV) of the different imaging methods were compared with the pathological examination results, which represented the gold standard. A P<0.05 was considered statistically significant. 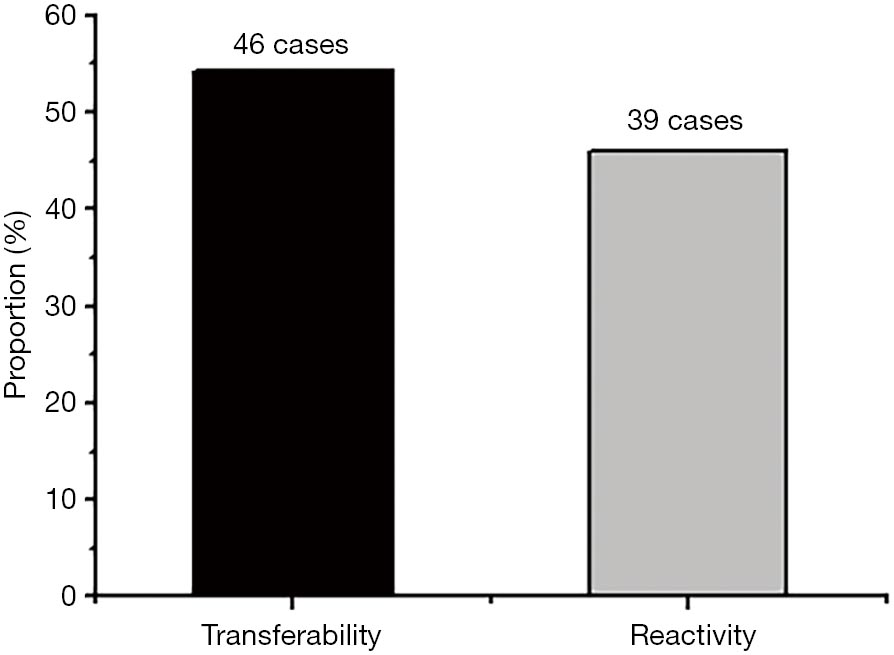 Diagnostic results of the conventional ultrasound

As Figure 2 shows, the lymph node morphology of this particular patient was irregular, the CT was more than 3 mm, the blood flow signal was Level 3, the blood flow type was mixed, and the conventional ultrasound score was 7, which indicated that the lymph nodes were malignant. The pathological examination showed metastatic lymph nodes.

As Figure 3 shows, the lymph node morphology of this particular patient was irregular, the CT was less than 3 mm, and there was no obvious blood flow signal. The conventional ultrasound score was 4 points, which indicated that the lymph nodes were benign. A pathological examination showed reactive lymph node hyperplasia.

Diagnosis results of the ultrasound elastography 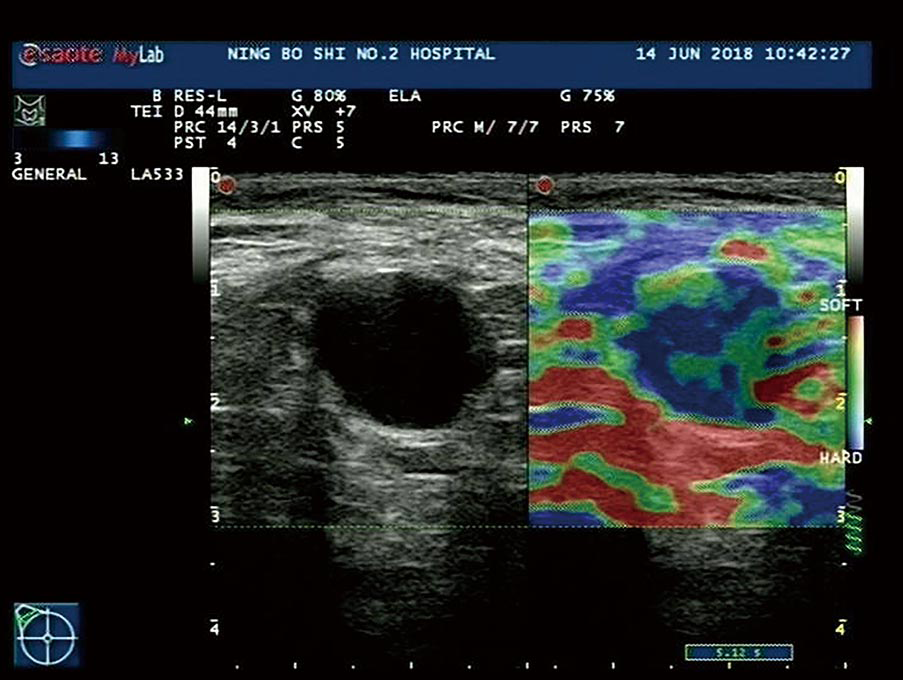 As Figure 6 shows, the blood flow classification of the left axillary lymph node for patients was Grade 1, bleeding type was Type 1, the elastic score was 2 points, and the overall score was 3. The pathological diagnosis showed invasive ductal carcinoma with no axillary lymph node metastasis. 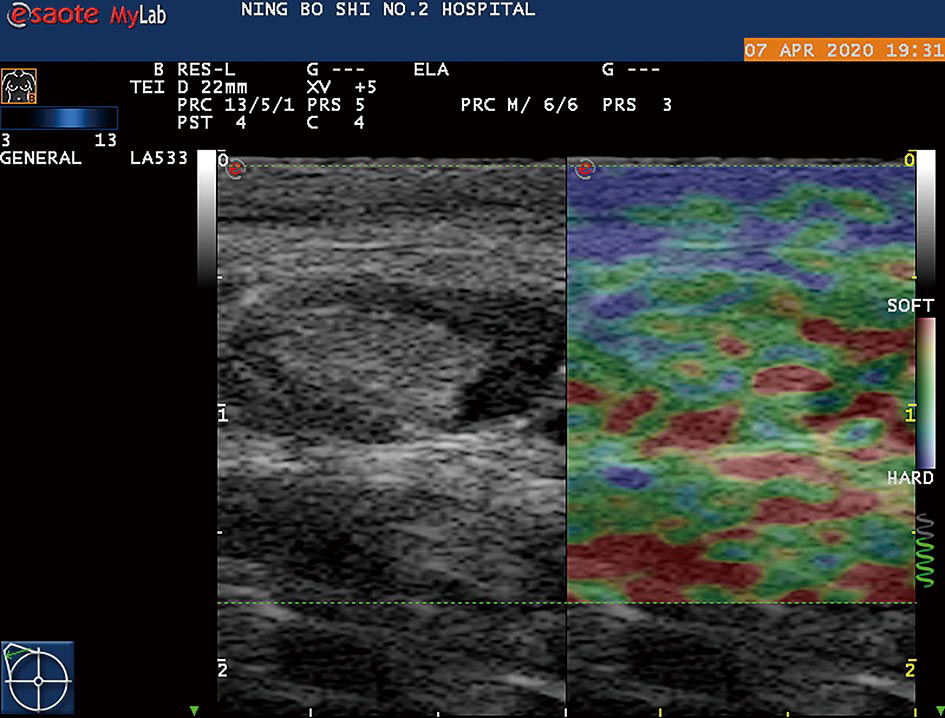 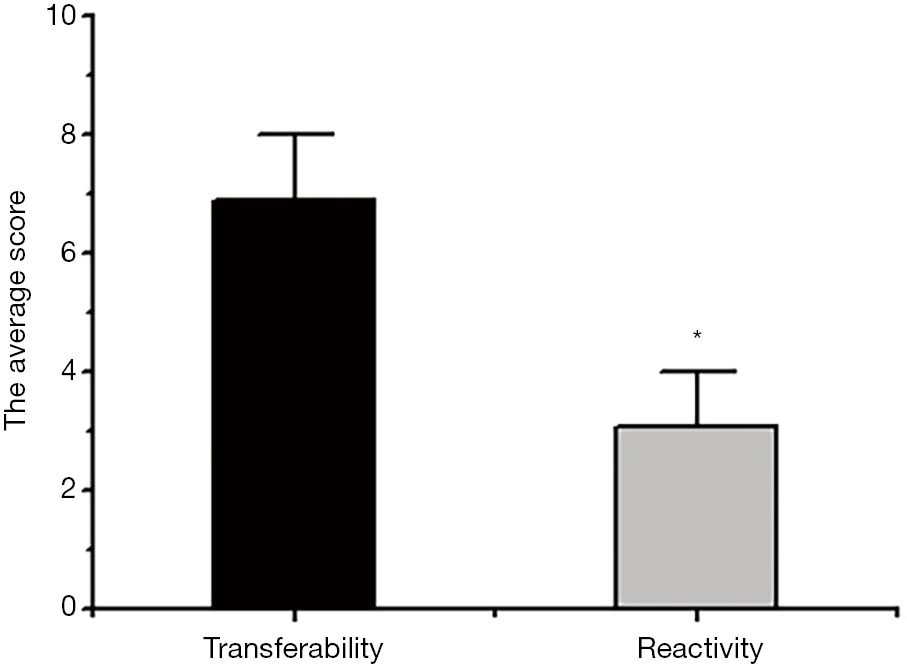 Figure 7 Ultrasound elastography of two types of lymph nodes. * indicates that the difference between the two groups was statistically significant (P<0.05). 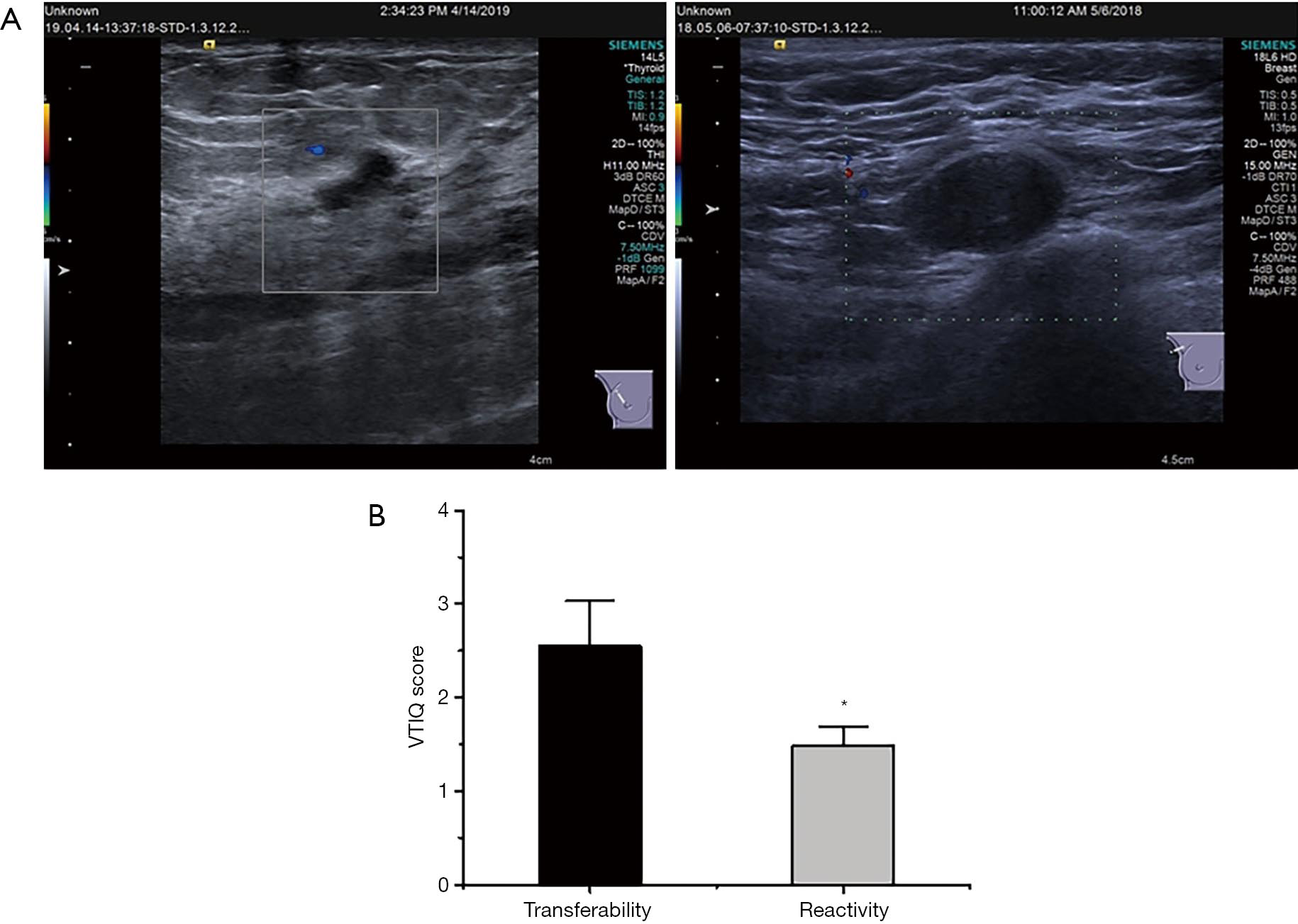 Comparison of the diagnostic efficiency of different computer imaging technologies 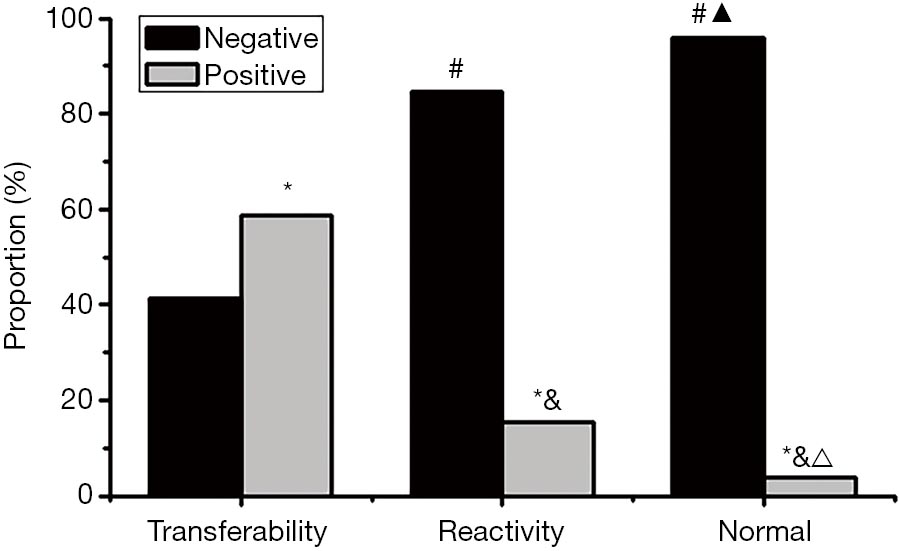 In recent years, VTIQ technology has become a popular research area in computer imaging technology in the medical field. In this study, VTIQ technology was used to identify axillary lymph node metastasis of breast cancer. The results showed that the diagnostic Se and Sp of this technique were 89.13% and 92.31%, respectively. These percentages were both higher than those found for conventional ultrasound imaging and ultrasound elastography. Thus, consistent with the research results of Liu et al. (2019) (14), these results showed that VTIQ technology has greater value in the differential diagnosis of axillary lymph nodes of breast cancer. VTIQ is a new type of elastic acoustic imaging technology of acoustic pulse radiation force. its principle is that the probe is placed on the body surface without external force, the tissue deformation is driven by the focused pulse wave emitted by the probe, and the probe receives the deformation information. The ultrasonic instrument displays the tissue hardness in four modes: time, displacement, mass and speed, the quality mode is expressed by different color levels, and when the quality is good, it is changed to the speed mode that quantitatively represents the tissue hardness. It makes the quantitative measurement of tissue hardness more reliable. The hardness information of small lesions can be measured. There are some differences in the hardness of different tissues in the mammary gland. the hardness of the nodules is related to their internal composition and arrangement. benign nodules such as adenosis and fibroadenoma contain more soft mucopolysaccharide components, and the arrangement of fibrous stroma and glands is relatively loose. however, malignant nodules such as infiltrating ductal carcinoma contain more dense elastic fibers and stroma, and the stroma can be organized and calcified. And the fibrous interstitial collagenization of most micro-breast cancer will cause a certain pulling effect on the surrounding tissue, and the hardness is significantly higher than that of the surrounding normal tissue, which are the pathological basis for VTIQ to evaluate benign and malignant nodules. VTIQ reflects the quantitative value of nodular hardness, and its hardness parameters are obtained by measuring the average value for many times under the condition that the interference factors are fully reduced and the quality mode is well displayed. In addition, the sampling frame is small, and the sampling will not deviate from the nodular range when measuring nodular hardness, so as to ensure the reliability of the measured data. VTIQ has high sensitivity and accuracy.

Reporting Checklist: The authors have completed the STARD reporting checklist. Available at http://dx.doi.org/10.21037/gs-21-199

Conflicts of Interest: All authors have completed the ICMJE uniform disclosure form (available at http://dx.doi.org/10.21037/gs-21-199). The authors have no conflicts of interest to declare.

Ethical Statement: The authors are accountable for all aspects of the work in ensuring that questions related to the accuracy or integrity of any part of the work are appropriately investigated and resolved. All procedures performed in this study involving human participants were in accordance with the Declaration of Helsinki (as revised in 2013). The experimental procedure was approved by the ethics committee of the Hwa Mei Hospital of University of Chinese Academy of Sciences (IRB No. 2018-023), and all patients signed informed consent forms.