Breast cancer is a common gynecological tumor, which has a high incidence in middle-aged and elderly women and seriously impacts the health and lives of patients (1). At present, surgery is the primary clinical treatment of early and mid-term breast cancer to improve the survival rate of patients (2). However, patients are prone to postoperative complications, such as deep vein thrombosis (DVT), which is one of the main causes of death (3). A study has shown that the annual incidence of DVT in cancer patients is much higher than that in healthy people (4). DVT mostly occurs in the lower extremities, especially the lower legs (5). It has been found that the destruction of the homeostatic equilibrium of the coagulation and fibrinolytic systems, caused by vascular endothelial injury and increased inflammatory response, can easily lead to DVT (6). The thrombin antithrombin complex (TAT) is an important coagulation marker, and an increased level of TAT can portend early abnormal coagulation function in the body (7). Thrombomodulin (TM) levels are abnormally up-regulated when the vascular endothelium is damaged, which helps to assess the degree of vascular injury (8). Fibrinogen degradation product (FDP) and D-dimer (D-D) are both functional markers of the fibrinolytic system, and their levels are significantly increased when fibrinolytic activity is enhanced in patients, which can indicate blood coagulation system activity (9,10). These are important markers in the process of venous thrombosis, which can be significantly increased during thrombosis. Therefore, in this study, we evaluated the diagnostic and prognostic value of changes in the coagulation and fibrinolytic function index for detecting DVT in the lower extremities of patients with breast cancer after radical mastectomy.

We present the following article in accordance with the STROBE reporting checklist (available at http://dx.doi.org/10.21037/gs-21-117).

This was a prospective observational study. From May 2016 to May 2019, 63 patients with lower extremity DVT after radical mastectomy in our hospital were selected as the thrombus group, and 69 patients without venous thrombosis after radical mastectomy were selected as the control group. The inclusion criteria were as follows: (I) patients diagnosed with breast cancer according to pathological tissue examination, imaging examination results, and breast cancer-related diagnostic criteria (11); (II) patients that required modified radical mastectomy treatment for unilateral breasts; (III) breast cancer patients with lower extremity DVT according to the diagnostic criteria in the Guidelines for the Diagnosis and Treatment of DVT (12) issued by the Vascular Surgery Group of the Surgery Branch of the Chinese Medical Association; and (IV) patients with complete clinical data. The exclusion criteria were as follows: (I) patients with recurrent breast cancer; (II) patients treated with anticoagulant drugs; (III) patients with severe deficiencies in liver or kidney function; and (IV) patients with mental illness. This study was approved by the Ethics Committee of the Ethics Committee of The Second Hospital of Jilin University (No. 2019087). All procedures performed in this study involving human participants were in accordance with the Declaration of Helsinki (as revised in 2013). Informed consent was taken from all the patients.

Sample collection and detection of coagulation and fibrinolysis-related indexes

Platelet-poor plasma was taken and the levels of coagulation and fibrinolytic markers, TAT and TM, were measured using a chemiluminescent ELISA kit according to the manufacturer’s instructions.

Statistical analysis was performed using SPSS 22.0 (International Business Machines Corporation, Armonk, State of New York, USA). Count data was expressed as “case (%)”, and the chi-square (χ2) test was performed. Measurement data was expressed as the mean standard deviation (M ± SD), and the t-test was performed between the groups. The receiver operating characteristic curve (ROC) curve was used to analyze the evaluation value of coagulation markers for tumor thrombosis, including sensitivity, specificity, Youden index, and the best diagnostic value (the ROC curve point closest to the upper left corner). The area under the ROC curve (AUC) was compared using the Z test. P<0.05 indicated a statistically significant difference.

The levels of TAT and TM in the thrombus group were markedly higher than those in the control group, and the difference was statistically significant (Table 3 and Figure 2).

Evaluation efficiency of coagulation markers in the diagnosis of tumor thrombosis 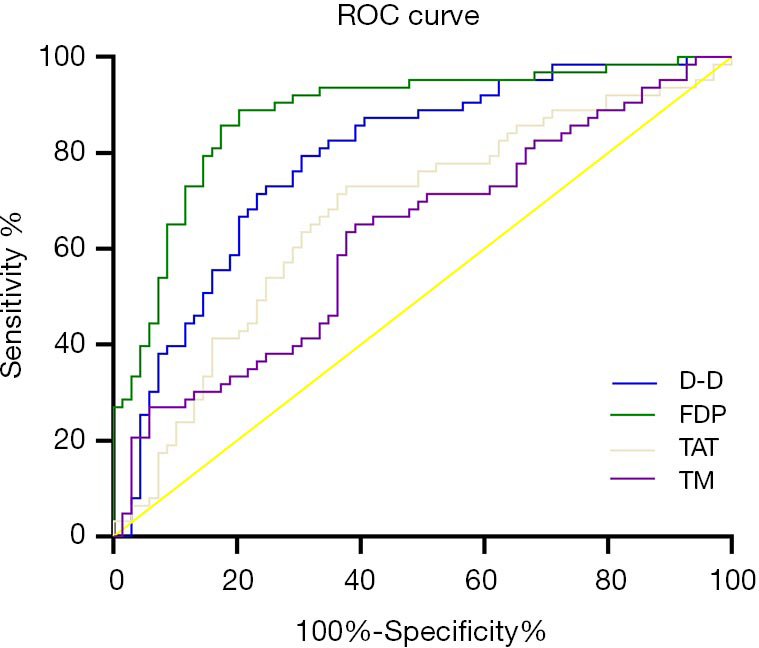 Figure 3 ROC curve of the evaluation efficacy of coagulation markers in the diagnosis of tumor thrombosis.

DVT refers to a venous return disorder caused by the abnormal clotting of blood in the deep vein cavity that obstructs the lumen (13). Venous endothelial injury, slow blood flow, and abnormal coagulation status after radical mastectomy are the main causes of postoperative DVT in patients (14). Mechanical trauma during surgery can cause vascular endothelial injury, which is also one of the risk factors for postoperative DVT in breast cancer patients (15). Tumor cells themselves can also target related factors to activate prothrombin expression in order to regulate the body’s coagulation system, or target fibrinolysis-related proteins and promote the increase of fibrinase levels in order to regulate the fibrinolytic system, thereby leading to an increase in blood viscosity and promotion of DVT (16).

Under normal conditions, the coagulation and fibrinolytic systems in the human body maintain a dynamic balance. However, the body’s stress response and damage to vascular endothelial cells during surgery can raise the level of fibrin regulatory factors, resulting in the blood continuously being in a hypercoagulable state, which is the basis of thrombosis (17). TAT is the product of the interaction between thrombin and antithrombin, which can accurately reflect the level of thrombin in the body (18). A study has shown that plasma TAT levels in middle-aged and elderly patients are significantly increased after traumatic artificial hip replacement, which can be used as an early diagnostic marker for patients who experience DVT after surgery (19). Another study reported that the high expression of plasma TAT in patients with malignant tumors could be used to diagnose thrombosis by reflecting the abnormal enhancement of coagulation and fibrinolytic activity in patients (20).

As a thrombin-regulating protein, TM can also predict the level and changes in the body’s coagulation function (21). Increased plasma TM levels in patients after hysterectomy can indicate exacerbation of vascular endothelial damage and the hypercoagulable state of the body (22). The plasma TM level of patients after bone trauma is elevated, which is related to the occurrence of thrombosis after surgery, and can be used to predict venous thrombosis (23). The results of this study showed that the levels of TAT and TM in the thrombus group were significantly higher than those of the control group, suggesting that TAT and TM may portend an increased risk of lower extremity DVT by reflecting the enhanced coagulation function and hypercoagulable state of breast cancer patients after radical mastectomy.

FDP is a degradation product produced by FIB under the action of plasmin, and increased levels of FDP can reflect increased fibrinolytic activity in the body (24). Increased FDP levels after laparoscopic surgery can predict the occurrence of venous thrombus embolism in patients (25). The increased expression of FDP in the plasma of patients with venous catheterization after lung cancer surgery is closely related to the occurrence of thrombosis, and the AUC of FDP for the diagnosis of thrombosis occurrence is 0.816 (26).

D-D is a specific fibrinolysis marker, and increased levels of D-D may indicate increased fibrinolysis activity in the body. The levels of plasma D-D in patients with acute lower limb DVT after total knee replacement is significantly higher than that of patients without acute lower limb DVT, which has a certain screening value for DVT (27). Up-regulation of D-D levels can be used to predict postoperative occurrence of portal vein thrombosis in patients with portal hypertension (28).

The results of this study showed that the levels of PT, D-D, and FDP in the thrombus group with coagulopathy were significantly higher than those in the tumor control group, suggesting that the increased levels of D-D and FDP could predict the occurrence of lower extremity DVT in patients with breast cancer after radical mastectomy. This process may be related to intraoperative vascular endothelial injury, which stimulates the expression of coagulation-related proteins and leads to an imbalance between the coagulation and the fibrinolytic systems. Therefore, these biomarkers may play an important role in the diagnosis of DVT in patients after radical mastectomy.

In this study, ROC curve analysis showed that the AUCs of FDP, D-D, and TAT in predicting lower extremity DVT in patients with breast cancer after radical mastectomy were 0.881, 0.790, and 0.672, respectively, and there were significant differences among these indexes. The predictive sensitivities of FDP, D-D, TAT, and TM were 88.89%, 79.37%, 73.02%, and 65.08%, respectively, indicating that the predictive value of plasma FDP for breast cancer patients with lower extremity DVT after undergoing radical mastectomy was higher than the other indicators. Clinically, more attention should be paid to the changes in FDP levels of patients with breast cancer after radical surgery in order to more accurately assess the occurrence of DVT of the lower extremities. However, the AUC of TM was 0.625, which was not significantly different from that of TAT, indicating that both of these indicators have similar predictive value for the occurrence of lower extremity DVT after surgery.

In conclusion, plasma FDP, D-D, TAT, and TM levels were significantly increased in breast cancer patients who developed lower-extremity DVT after radical mastectomy, which was related to imbalanced coagulation and fibrinolytic functioning in patients. Moreover, FDP had the highest predictive value for occurrence of lower extremity DVT after radical mastectomy. However, the mechanisms of the various indexes involved in the occurrence of DVT need to be further verified and studied.

Reporting Checklist: The authors have completed the STROBE reporting checklist. Available at http://dx.doi.org/10.21037/gs-21-117

Conflicts of Interest: All authors have completed the ICMJE uniform disclosure form (available at http://dx.doi.org/10.21037/gs-21-117). The authors have no conflicts of interest to declare.

Ethical Statement: The authors are accountable for all aspects of the work in ensuring that questions related to the accuracy or integrity of any part of the work are appropriately investigated and resolved. This study was approved by the Ethics Committee of The Second Hospital of Jilin University (No. 2019087). All procedures performed in this study involving human participants were in accordance with the Declaration of Helsinki (as revised in 2013). Informed consent was taken from all the patients.