An important prognostic feature of breast cancer is lymph node metastasis, and it has reference significance for treatment options. In a study of sentinel lymph node drainage patterns in untreated breast cancer patients, breast lymphatic drainage was as follows: ipsilateral axilla (92.3%), intramammary (21.1%), interpectoral (2.1%), subclavian (2.6%), and supraclavicular (0.4%) (1). Contralateral axillary metastasis (CAM) is uncommon in primary breast cancer, and the reported incidence is between 3.5% and 6%. CAM can occur with primary breast cancer either synchronously or metachronously and can be the only site of metastasis. The management of these patients, especially those without distant metastasis, is controversial (2). The reported literature has considered CAM as stage IV disease, and there are no standard guidelines for CAM.

We present the following article in accordance with the CARE reporting checklist (available at http://dx.doi.org/10.21037/gs-21-137).

In 2016, a 44-year-old female patient presented to the outpatient department of The First Affiliated Hospital of Nanjing Medical University (Jiangsu, China) due to a left breast lump. Physical examination revealed a painless, hard, and poorly mobile mass in the upper inner quadrant of the left breast, 2.0 cm ×2.0 cm in size, without hydro derma, skin dimpling, nipple retraction, or nipple discharge. An ultrasound (US) displayed an irregularly shaped, lobulated, and calcified hypoechoic mass of 2.0 cm ×1.2 cm without abnormal axillary lymph nodes, which was classified as category 5 based on the Breast Imaging Reporting and Data System (BI-RADS) (3). A molybdenum mammogram revealed a patchy, irregular, and slightly high-density mass with heterogeneous cluster calcification, 1.0 cm ×1.8 cm in size. Core needle biopsy under ultrasonic guidance confirmed invasive carcinoma. After communicating with the patient about disease and surgical-related risks, she underwent left breast-conserving surgery (BCS) and left SLND. Intraoperative frozen pathology showed 1 of 4 lymph node metastases. She was suggested to undergo ALND. Postoperatively, histopathology revealed that the pathological diagnosis was invasive ductal carcinoma, with 1 of 10 lymph node metastases. Immunohistochemistry (IHC) was positive for estrogen receptor (ER) and progesterone receptor (PR) but negative for human epidermal growth factor receptor 2 (HER2). In postoperative adjuvant therapy, she was treated with 4 cycles of epirubicin (75 mg/m2) and cyclophosphamide (600 mg/m2) followed by 4 cycles of paclitaxel (75 mg/m2), and then underwent radiation therapy to the chest wall. Following the completion of chemotherapy, the patient has taken tamoxifen orally until now. Since the operation, she has been subsequently followed up every 6 months. 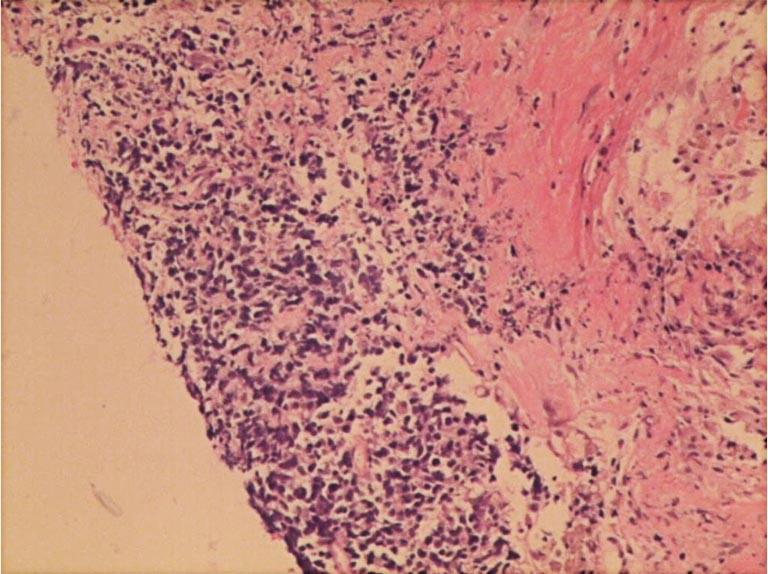 All procedures were in accordance with the ethical standards of the responsible committee on human experimentation (institutional and national) and with the Helsinki Declaration (as revised in 2013). This study was approved by the ethics and research committee of the First Affiliated Hospital of Nanjing Medical University. Informed consent was taken from all the patients.

CAM is quite uncommon in the absence of metastatic disease elsewhere. Three possible sources should be considered: contralateral spread from the primary breast cancer; metastasis from an occult primary in the contralateral breast; and metastasis from an extramammary site. CAM may be more common in second primary and recurrent breast cancers as obstruction or damage of conventional axillary lymphatics may cause collateral circulation. This blockage may be caused by surgery and radiotherapy. In a meta-analysis of SLN biopsies in locally recurrent breast cancer by Maaskant-Braat et al., it was found that 43.2% of patients had abnormal drainage (4). Therefore, in second primary or recurrent breast cancer, the location of the sentinel lymph node becomes unforeseeable, confirming that after radiotherapy or previous surgery these drainage route changes may be obvious (5). In this case, the patient had previous left axillary lymph node dissection and radiotherapy. We hypothesized that CAM is caused by changes in lymphatic drainage and abnormal pathways and is secondary to lymphatic rather than blood-borne spread. Clinically, it is difficult to estimate CAM due to the lack of MRI to diagnose concealed contralateral tumors or failure to obtain adequate follow-up. However, CAM can be detected on preoperative lymphoscintigraphy and can be confirmed by lymph node biopsy and pathological diagnosis (6). IHC markers have been proven to usefully distinguish metastatic axillary lymph nodes from occult contralateral tumors. Here, we introduced a patient suffering from second primary left breast cancer and contralateral axillary lymph node metastasis. We confirmed this diagnosis by 99mTc and methylene blue, along with pathological IHC analysis. The IHC of the right lymph node was the same as that of the second breast cancer on the left, which was different from the primary tumor on the left.

It is rare if CAM has not metastasized to other distant organs, therefore, it is currently considered as M1 (stage IV) disease. Its management is considered complicated and is controversial. Nevertheless, some studies have reported that patients who develop CAM without other metastases to distant organs show longer overall disease-free survival than that of stage IV patients, which suggests that CAM should also be categorized as a local-regional disease (7). Therefore, treatment should intend to be curative rather than palliative. Moossdorff et al. performed a systematic review of CAM cases and reported an overall survival of 82.6% after an average follow-up of 50.3 months. CAM compares more favorably than concurrent stage IV disease (8). Chkheidze et al. retrospectively analyzed the medical records of 12 patients diagnosed with breast cancer and CAM, which, however, gives no evidence of any other distant metastases reflected by their clinical features, pathologic diagnoses, therapy, and data of follow-up. They suggested that isolated CAM without distant organ metastasis represents regional diffusion rather than distant metastasis (9). There have been other similar cases of CAM reported. Kinoshita et al. reported a 64-year-old female with metachronous second primary left occult breast cancer initially presenting as right axillary lymph node metastases who had received breast-conserving therapy for left breast cancer 4.5 years prior (10,11). Christina et al. presented a patient who was diagnosed with invasive ductal carcinoma after left BCS and ALND at 9-year follow-up (12). Gingerich et al. showed that an 81-year-old woman, suffering from apparent second primary breast cancer, had a history of invasive ductal breast cancer 18 years before CAM (13). All 3 of these patients underwent radiation therapy and initial ALND, and contralateral axillary lymph node involvement did not show significant clinical signs until second primary ipsilateral breast carcinoma was found. However, they did not confirm that the metastatic lymph nodes were from primary breast lesions. Kim et al. found through preoperative FDG PET/CT and lymphoscintigraphy that the patient had second primary breast cancer, which was accompanied by contralateral axillary lymph node metastasis, emphasizing the usefulness of FDG PET/CT and lymphoscintigraphy to confirm the diagnosis (14).

Because the possibility of contralateral occult breast cancer is very small, mastectomy is not recommended. We performed left mastectomy and right axillary lymph node dissection with curative intent.

We propose that CAM may occur in second primary or recurrent breast cancer because of previous surgery or radiation therapy. If changes in lymphatic drainage are suspected in patients with a history of breast cancer surgery, contralateral axillary lymph node metastasis should be considered. In patients with recurrent breast cancer, systemic examinations should be completed for the assessment of lymph node conditions, especially for the contralateral axillary lymph nodes. CAM could be detected through preoperative lymphoscintigraphy, lymph node biopsy, and pathological diagnosis. IHC markers have been shown to usefully distinguish metastatic axillary lymph nodes from occult contralateral tumors. We suggest that isolated CAM without distant organ involvement represents regional diffusion rather than distant metastasis and recommend specifying CAM as N3 instead of M1. We should treat CAM with curative intent rather than palliative intent, and axillary dissection offers good local control.

We thank Prof. Cong Wang for reviewing the pathology.

Reporting Checklist: The authors have completed the CARE reporting checklist. Available at http://dx.doi.org/10.21037/gs-21-137

Conflicts of Interest: All authors have completed the ICMJE uniform disclosure form (Available at http://dx.doi.org/10.21037/gs-21-137). The authors have no conflicts of interest to declare.

Ethical Statement: The authors are accountable for all aspects of the work in ensuring that questions related to the accuracy or integrity of any part of the work are appropriately investigated and resolved. All procedures were in accordance with the ethical standards of the responsible committee on human experimentation (institutional and national) and with the Helsinki Declaration (as revised in 2013). This study was approved by the ethics and research committee of the First Affiliated Hospital of Nanjing Medical University. Informed consent was taken from all the patients.