Perioperative and short-term oncological outcomes following laparoscopic versus open pancreaticoduodenectomy after learning curve in the past 10 years: a systematic review and meta-analysis

Pancreaticoduodenectomy (PD) is a complex procedure which can provide cure or prolonged survival for benign lesion and cancer in periampullary region and pancreatic head. And in resectable patients, it can achieve a 5-year survival rate of 30% (1). Open pancreaticoduodenectomy (OPD) is the classic procedure for pancreatic and periampullary malignancies and some benign diseases. Since Gagner and Pomp first reported laparoscopic pancreaticoduodenectomy (LPD) in 1994 (2), LPD is increasingly used worldwide, but only 285 reported cases have been reported as of 2011 (3). However, during 2010–2020, more and more studies have confirmed the safety and feasibility of LPD and emphasized it is superior to OPD in reducing blood loss, shorter hospital stay, earlier oral intake, less pain, and faster recovery (4-7). However, an analysis of 983 patients found that patients who underwent LPD had higher 30-day mortality compared to those with OPD in low-volume centers (8).

Although LPD has the potential advantages of small trauma, fast recovery and excellent vision, surgeons need a relatively long training time to become technically proficient in this complex procedure. As with all surgical studies, surgeons’ experience and performance has a significant impact on outcomes which can be a source of bias. However, the great majority of the studies on LPD and OPD are small sample study and the surgeons remained in the early training phase. Nagakawa et al. showed that hepatopancreatobiliary surgeons need more than 30 cases to make LPD become stable (9). In addition, even at high-volume centers, the surgical results during the learning curve are not satisfactory (10,11). According to our search, there are no prospective studies and no meta-analysis was performed specifically to compare the perioperative and short-term oncological outcomes of LPD to OPD from RCTs and large-scale retrospective cohorts in the last 10 years to avoid bias. Hence, we carefully selected some RCTs or large-scale retrospective cohorts to conduct a systematic review and meta-analysis to compare the clinical outcomes of LPD versus OPD after learning curve.

This study has been reported in line with the recommendations of the PRISMA guidelines (available at http://dx.doi.org/10.21037/gs-20-916) (12) and registered at PROSPERO with registration number: CRD42020218080. This article is a meta-analysis; therefore, Institutional Review Board approval is not needed for this paper.

A literature search was performed in October 2020. The primary searched sources were the PubMed, Web of Science, EMBASE, Cochrane Central Register, and ClinicalTrials.gov databases for studies published between January 2010 and October 2020 by two independent investigators (QB Feng, ZC Xin). The following key terms and their combinations were used: laparoscopic, open, conventional, Whipple, and PD. To prevent missing relevant publications, computer search was supplemented with manual searches of the references of publication and reviews.

Two reviewers (QB Feng, ZC Xin) extracted the data independently using a unified datasheet, and in the case of any ambiguity, a third observer (B Zhu) was consulted to review the study to reach a consensus. Data extraction include the following items: study and patient characteristics, operative and postoperative outcomes. Study and patient characteristics include first author, country, publication year, research design, sample size, and mean age; the latter included operative time, blood loss, blood transfusion, tumor size, postoperative morbidity and 90-daymortality, LOS, R0 resections, and number of harvested lymph nodes. We adopted the Newcastle-Ottawa Scale (NOS) to assess methodological quality (13). Each study was scored between 0 and 9 according to NOS, a score of ≥6 is considered indicative of high quality. Two reviewers (B Zhu, ZC Xin) assessed the included studies independently.

Review Manager 5.3 software was used to analysis data. The odds ratio (OR) and weighted mean difference (WMD) with the 95% confidence interval (CI) were used to compare dichotomous and continuous variables, respectively. We adopted the method described by Hozo et al. to calculate the standard deviation which was reported as median and range value (14). Funnel plot was used to assess potential publication bias. Statistical heterogeneity quantified using with the I2 index. A study with an I2 less than 50% was considered indicative of low or moderate heterogeneity, and the fixed effect mode (FEM) was then applied to pool the results. A study with an I2>50% was considered a high heterogeneity and the random effect model (REM) was adopted.

Search results and characteristics of the eligible studies

The literature search yielded 534 relevant English publications from the various electronic databases, of which 15 retrospective cohort studies and 3 RCTs (5,7,11,15-29) comparing LPD and OPD in a total of 12,495 patients (2,037 and 10,458 underwent LPD and OPD, respectively) were included for further analysis. A flow chart of our analysis protocol is shown in Figure 1. The major features and qualities of these 18 studies are listed in Table 1, while the assessment of risk of bias in individual studies made with the Cochrane risk of bias tool is presented as a summary in Figure 2. All results of this meta-analysis are presented in Table 2. 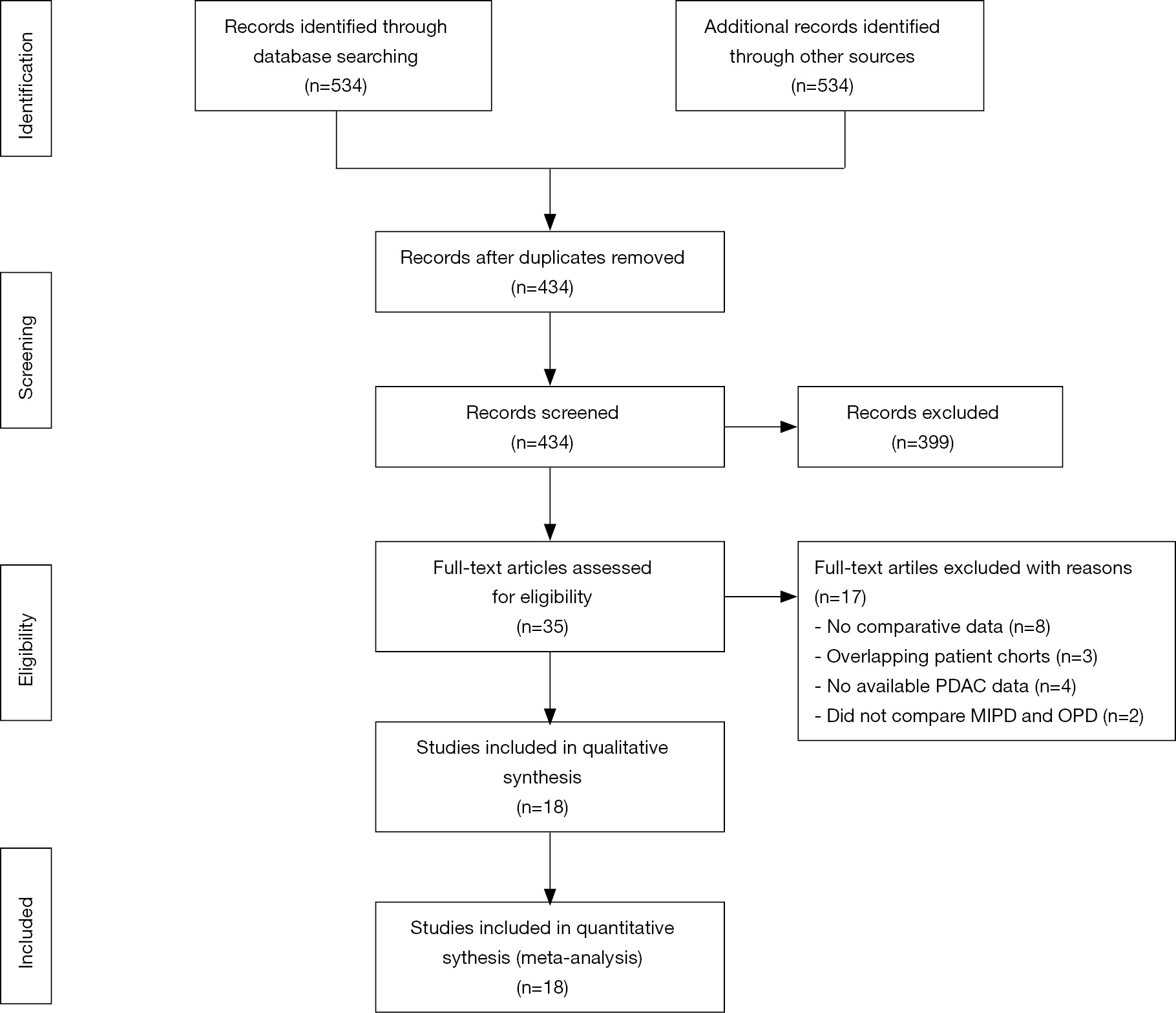 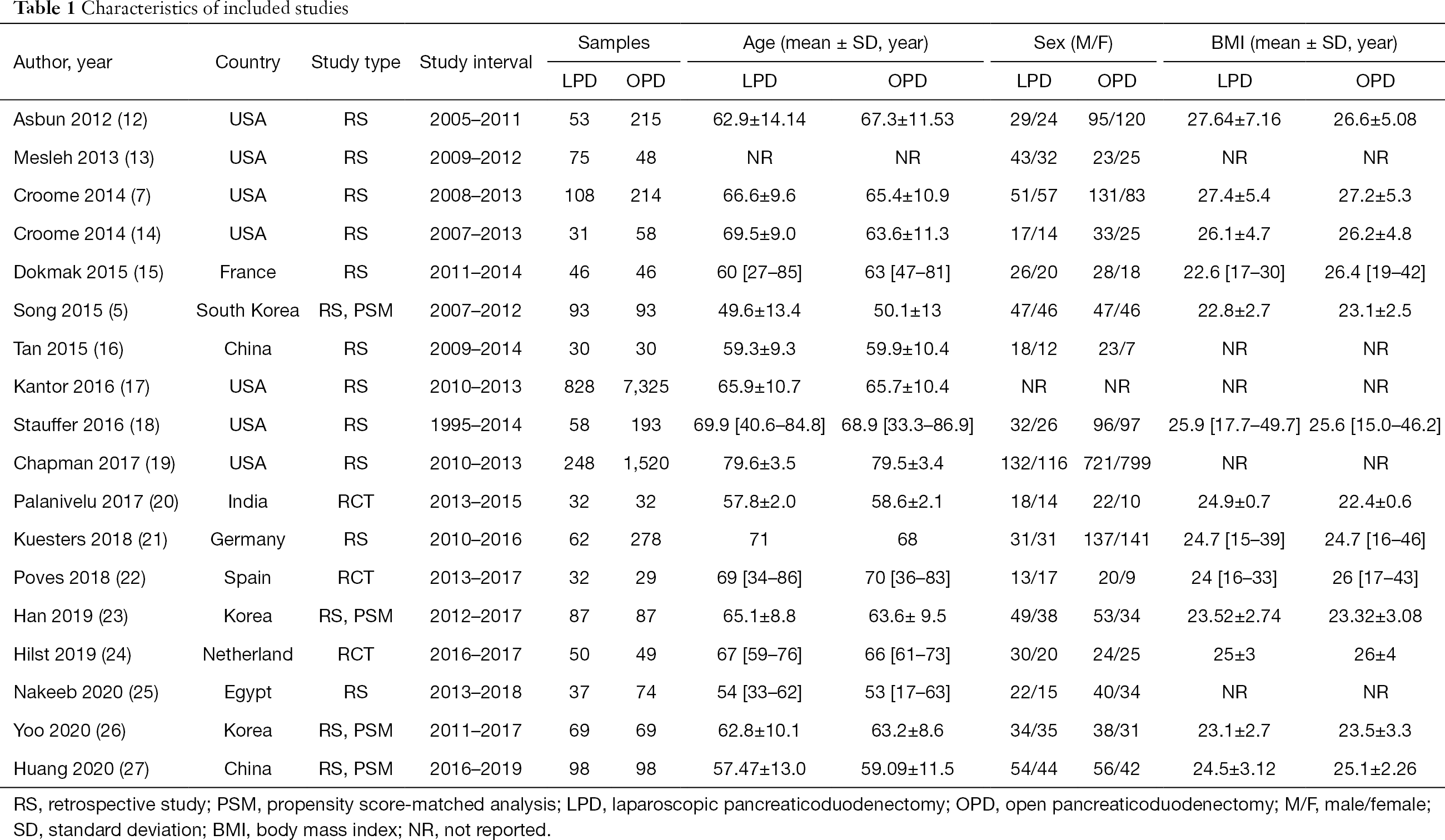 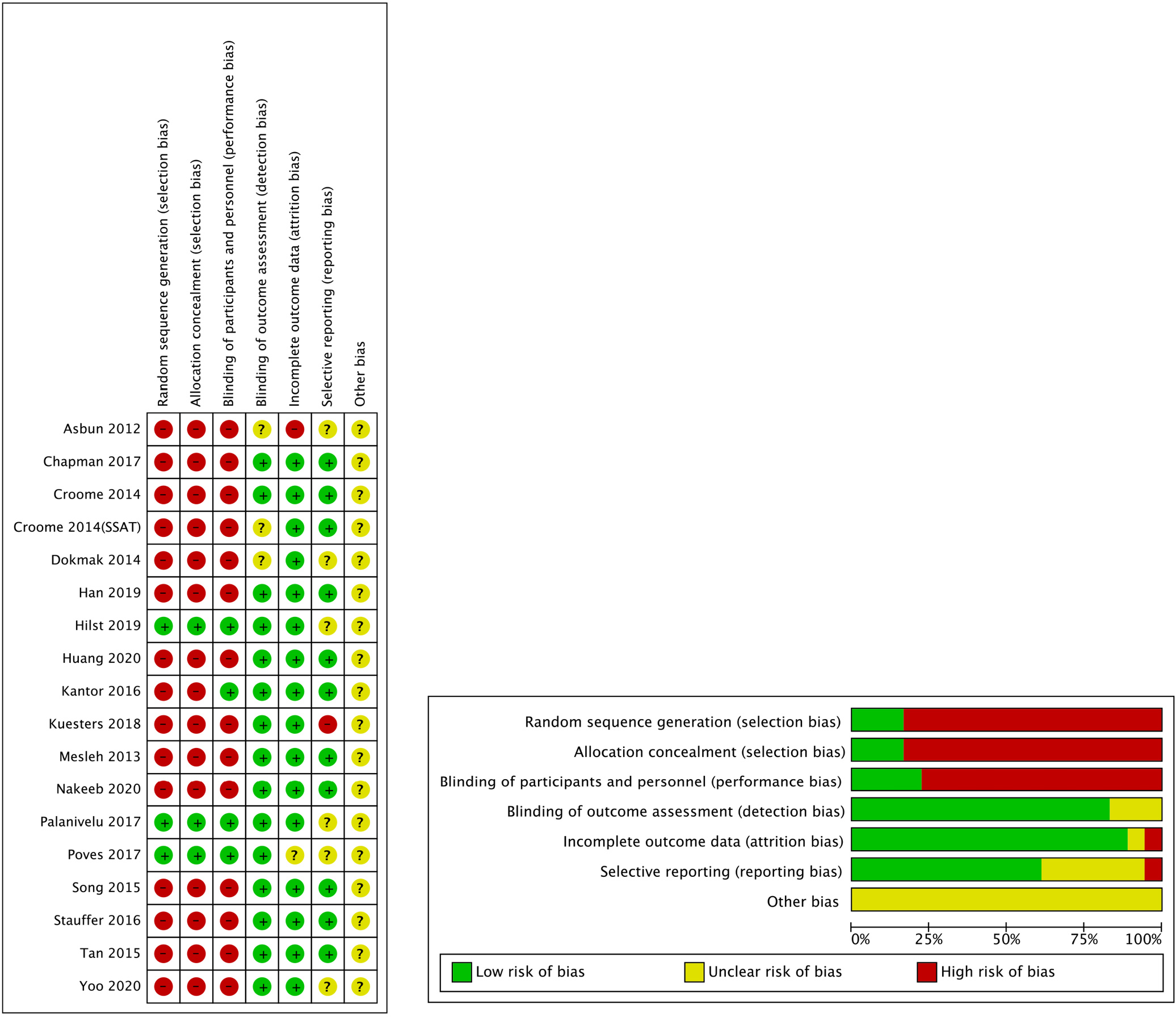 Figure 2 Quality assessment of included studies. Overall (left) and study-level risk of bias (right), using Cochrane’s risk of bias assessment tool. Studies were deemed to be at high, low or unclear risk of bias based on adequacy of sequence generation, allocation concealment, blinding, method of addressing incomplete data, selective reporting, and other biases. The review authors’ judgments about each risk of bias item are presented as percentages across all included studies, and for each included study. 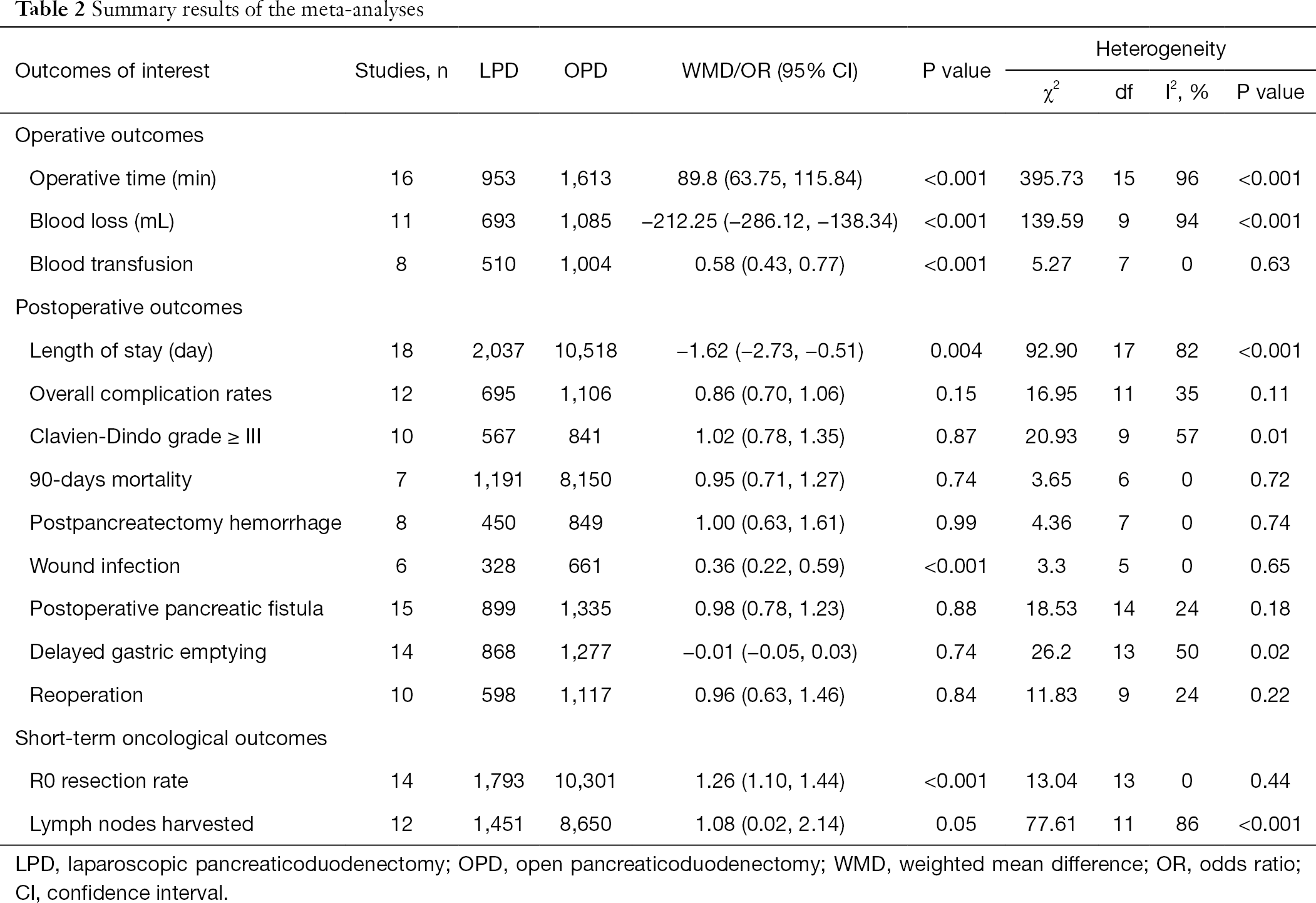 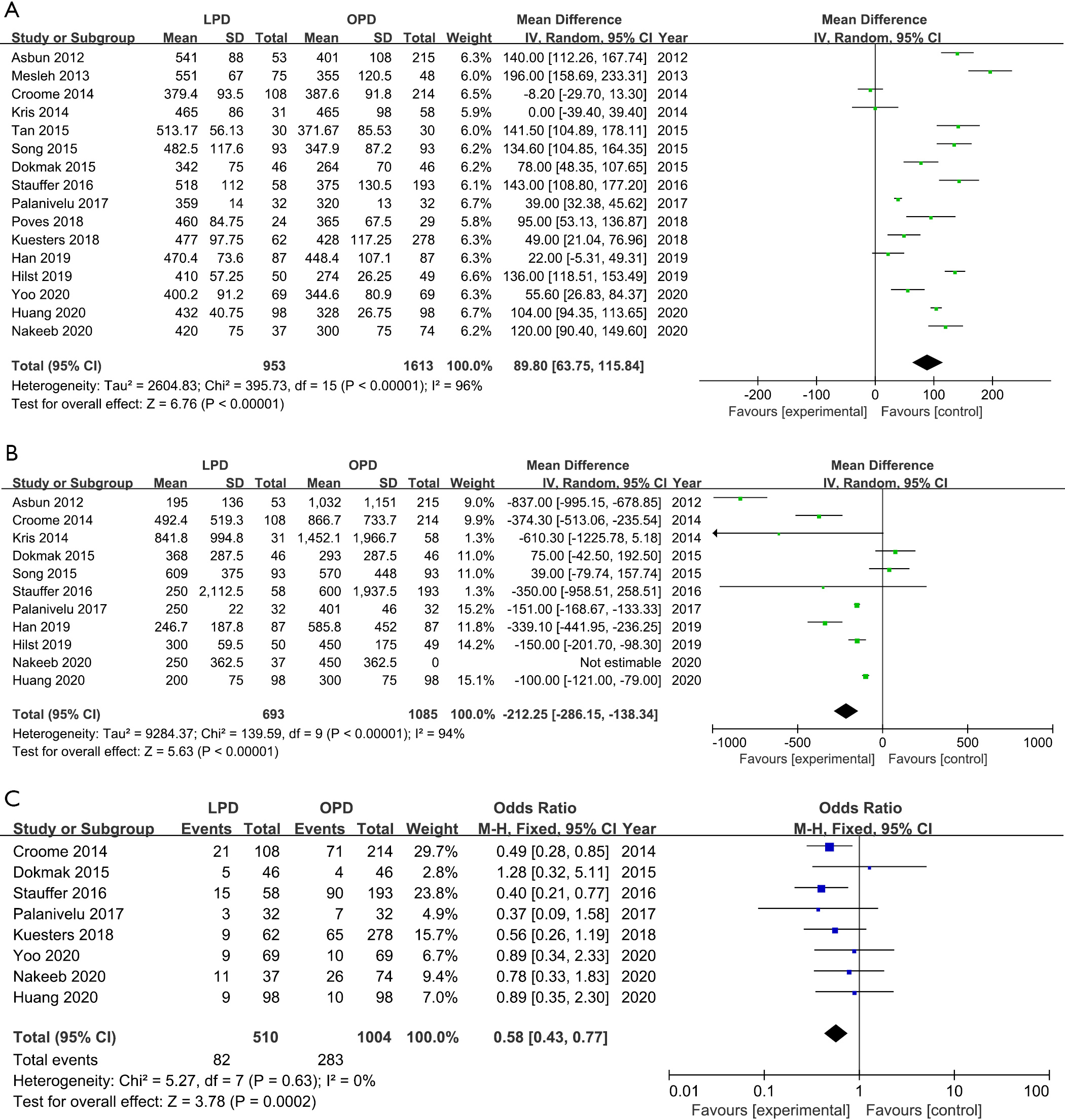 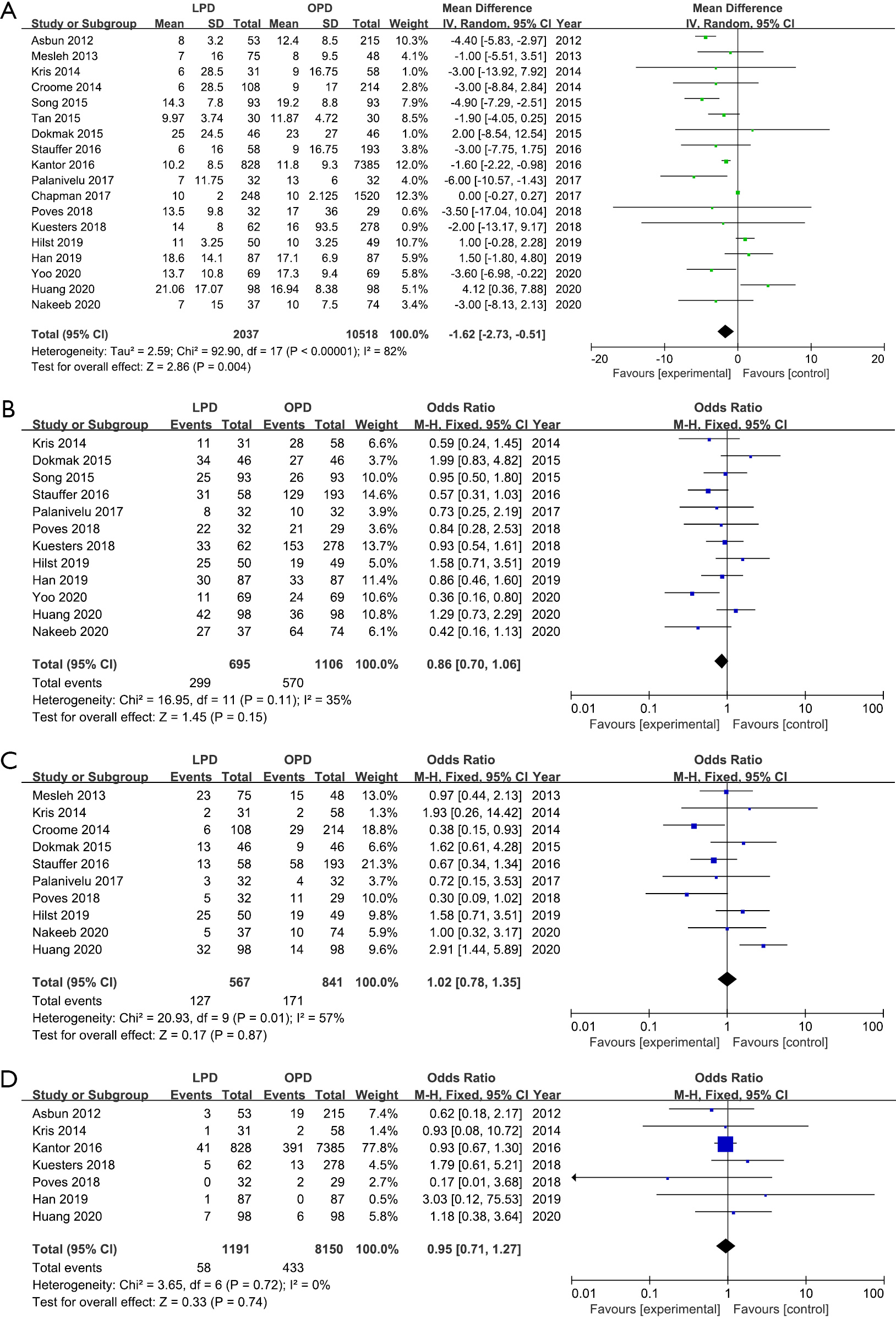 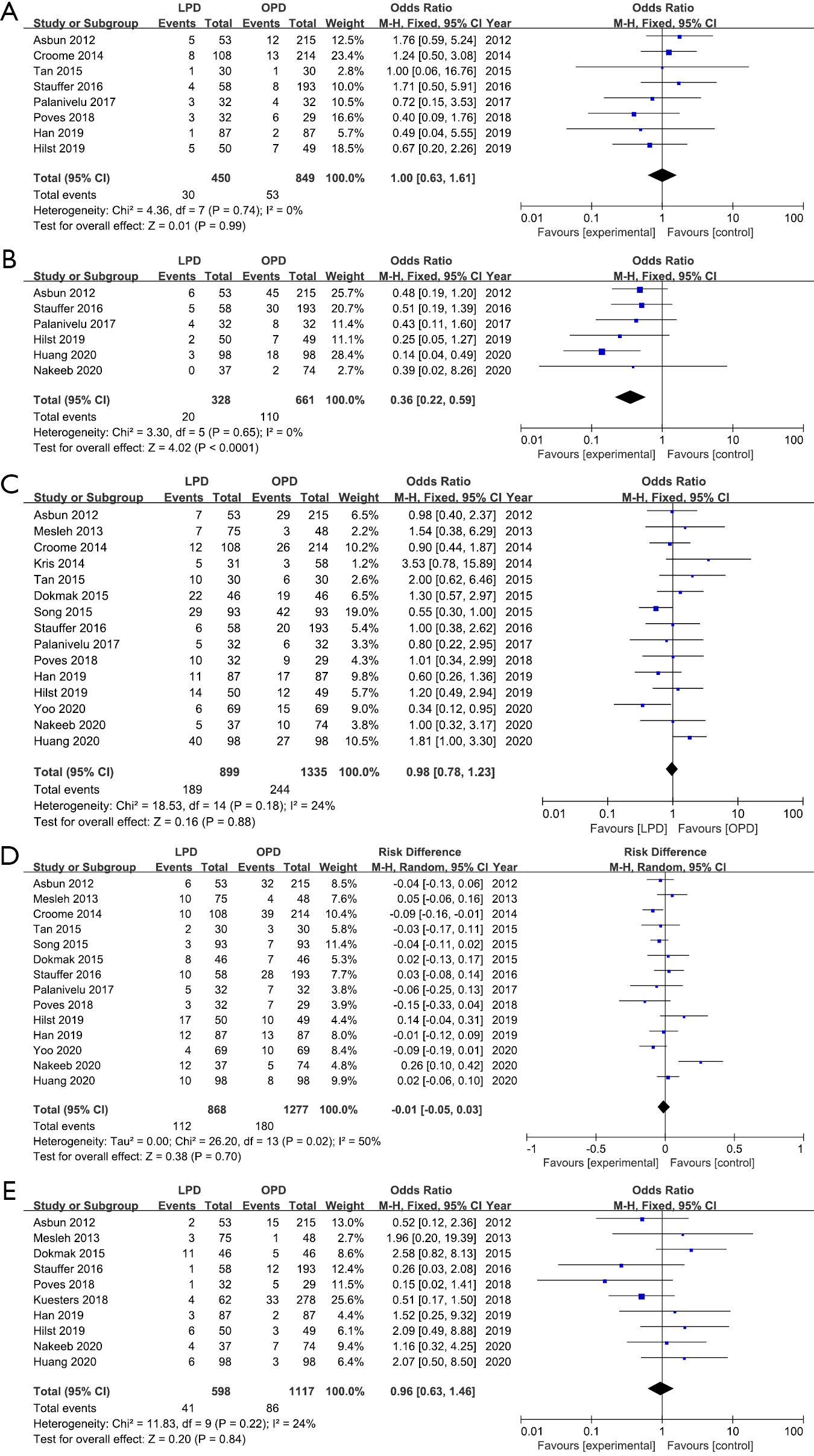 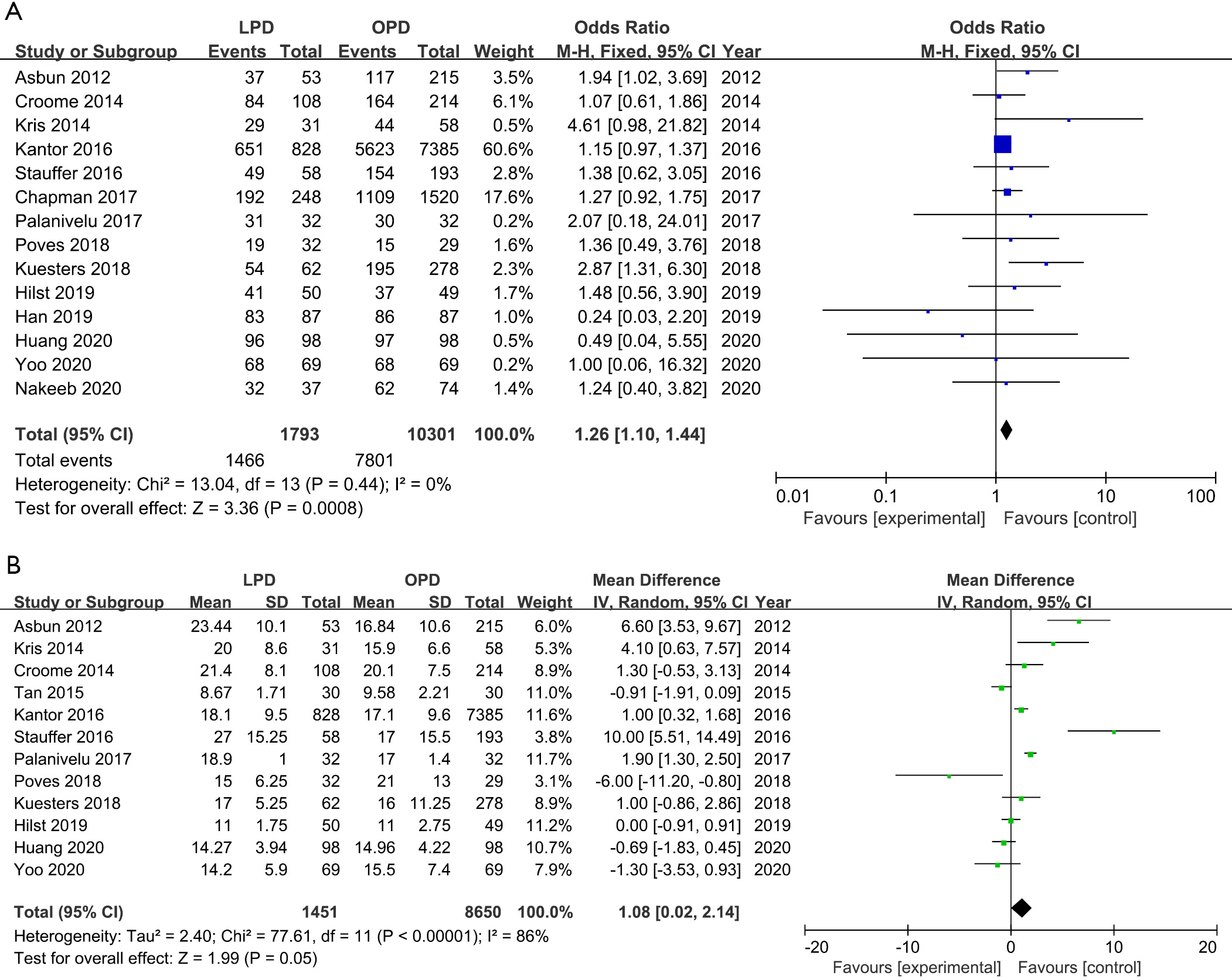 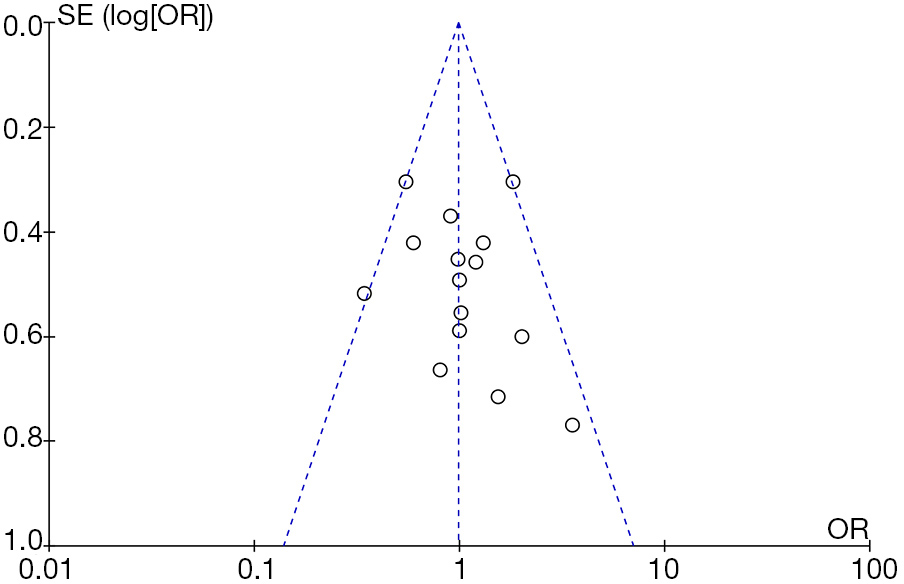 Laparoscopic pancreatoduodenectomy (LPD) is one of the most difficult operations in general surgery due to its complicated operation process and high requirements for surgeons. It is considered as the “Everest” of abdominal endoscopic surgery. After more than 20 years of accumulation and development, and with the improvement of science and technology and the improvement of surgical facilities and equipment, LPD has been widely carried out in large medical centers at home and abroad. Previous clinical studies have preliminarily shown that LPD can achieve the same safety and effectiveness as OPD, and has certain advantages in postoperative recovery time. Because of the limited number of RCTs, it is still difficult to assess the feasibility and oncologic outcomes of LPD. As surgical technique is an important bias factor, assessing the role of the surgeons’ learning curve and their impact on the results is of particular importance. Three RCTs and fifteen large-scale retrospective cohorts consisting of 12,495 patients were included in this study to compare the perioperative outcomes and oncologic outcomes and of LPD with OPD after learning curve.

The results of our meta-analysis shows LPD has a shorter LOS, lower wound infection rate, less blood loss but a longer operative time than OPD, which was similar with the study of Nickel et al. (31). The main factors that lead to the longer operation time of LPD are that the technique is in the stage of accumulation and development, the technique is not skilled enough, and the team cooperation is not close enough. Additionally, owing to longer dissection and reconstruction LPD has longer operative time.

Negative margin and the number of lymph node dissection are two important malignancy prognosis factors in PD. Pooled data from this meta-analysis revealed that LPD has a higher R0 rate than OPD. We think that this may be explained by patients with early stage or even benign diseases were chosen to perform LPD. From the perspective of tumor radical effect, the results of this study show that the two surgical methods have the same effect in the number of lymph node dissection, suggesting that LPD and OPD have the same tumor radical effect, which is basically consistent with the results of most existing clinical studies (5,32). Even though the number of lymph node dissection between LPD and OPD were similar, there was a tendency that the OPD group has more lymph nodes harvested which was consistent with the study of Sharpe et al. (33). This may be caused by LPD cases are early stage cases with no obvious blood vessels and no invasion of surrounding organs, the sample size may not be enough and there is a possibility of selection deviation.

There was no significant difference in the 90-day mortality, overall complication rates, POPF, and the incidence of severe complications (Clavien Dindo 3/4 grade complications) between the two groups, indicating that the safety of the two groups was similar. POPF was considered the most common and difficult complication after PD, which could cause DGE, hemorrhage, intra-abdominal abscess, sepsis, and influence the postoperative mortality (34,35). At present, most studies have confirmed that the incidence of pancreatic fistula in LPD and OPD is similar, and the difference is not statistically significant. Postoperative bleeding may come from anastomotic stoma, blood vessels, pancreatic stump, stress ulcer, etc.

However, there are still some limitations in this study. First, the main limitation is that there were only 3 RCTs, which may have contributed to biased data. Even though 3 RCTs were included in this meta-analysis, the quality of evidence remained moderate. Furthermore, selection criteria could strongly influence the outcomes. What’s more, the follow-up time was too short, some outcomes not being assessed, such as recurrence and survival (disease-free and overall) and long-term complications of LPD needs to be evaluated.

In summary, the present meta-analysis revealed that LPD is a safe alternative to OPD as it is associated with significant reductions in blood loss, blood transfusion, LOS, and the incidence of wound infection. This study suggests that LPD is a technically and oncologically safe and feasible approach for hepatopancreatobiliary surgeons after learning curve and LPD should be a preferable choice as LPD achieved similar postoperative outcomes and superior oncological outcomes compared with OPD. Compared with the 100-year history of OPD, there is still a long way to go. We recommend that LPD should be conducted in experienced centers with specialist surgeons. Future large-scale prospective comparative studies and randomized clinical trials are expected to provide more convincing results for evaluation to further evaluate the safety and efficacy of LPD after learning curve.

We acknowledge the authors who provided the original studies, and thank my wife (Jie Qiu) and my English teacher (Xia Guo) who helped and supported us in this research.

Reporting Checklist: The authors have completed the PRISMA reporting checklist. Available at http://dx.doi.org/10.21037/gs-20-916

Conflicts of Interest: All authors have completed the ICMJE uniform disclosure form (available at http://dx.doi.org/10.21037/gs-20-916). The authors have no conflicts of interest to declare.