Impact of prior cancer history on outcomes in thymoma: a propensity score, population-based study

Thymomas are rare neoplasms driving from the epithelial component of the thymus and usually located in the anterior mediastinum. Many thymomas manifest an indolent clinical course and are usually incidentally discovered by computed tomography scan (1). Based on the Surveillance, Epidemiology, and End Results (SEER) database, the overall incidence of thymoma is 0.13 to 0.15 per 100,000 person-years in America (2,3). With the primary treatment of complete resection, the 10-year overall survival (OS) of different stages thymoma ranges from 50% to 80% (4). Thymomas have a long natural history and peak in the seventh decade of life, thus increasing the prevalence of multiple primary cancers (2,5).

We present the following article in accordance with the STROBE reporting checklist (available at http://dx.doi.org/10.21037/gs-20-880).

The population-based data were extracted from the SEER 18 Regs research data through SEER*Stat software version 8.3.8, broadly representing approximately 27.8% of the U.S. population (https://seer.cancer.gov/data-software/documentation/seerstat/nov2018/). Patients with thymoma diagnosed between 1975 to 2017 were included in this study. Thymoma was identified by histology of the International Classification of Diseases for Oncology, 3rd edition. Cancer history was derived from the SEER first malignant primary indicator. Exclusion criteria were as follows: (I) patients younger than 18 years at diagnosis; (II) patients with incomplete follow-up information or survival data; (III) patients diagnosed at autopsy or death certificates. All the data were extracted from the SEER database. Institutional review board approval was waived for this study because this is a public anonymized database.

Demographic data were extracted, including age, sex, year of diagnosis, marital status, race, Masaoka-Koga stage, WHO histological subtype, size, treatment method, and cause of death. Stage was based on Masaoka-Koga staging system which was proposed by Fernandes et al. (8). Patients were classified into three groups: I/IIA (“an invasive neoplasm confined entirely to the organ of origin” or “localized, not otherwise specified”), IIB (“adjacent connective tissue”), and III/IV (“adjacent organs/structures” or “further contiguous extension”, or “metastasis”). I/IIA and III/IV were unable to be distinguished because of insufficient clinicopathological data. Treatment methods were divided into four groups: (I) surgery alone; (II) surgery plus chemotherapy or surgery plus radiation; (III) chemotherapy or radiation; (IV) no treatment. The survival time was recorded in months, and the survival time of 0-month was transformed into 0.5-month to include those who died within 1 month after thymoma diagnosis.

Patients included in this study were divided into two groups based on prior cancer history. Data were presented as median with standard deviation for continuous variables and as frequencies with proportions for categorical variables. Categorical variables were assessed by Pearson chi-squared and continuous variables were assessed by t-test as appropriate. Propensity score matching (PSM) method was employed to balance baseline characteristics. Propensity scores were calculated based on age, sex, marital status, year of diagnosis, Masaoka-Koga stage, WHO histological subtype, size, treatment method. A one-to-two PSM with a caliper of 0.05 was performed.

The primary endpoint of the study was OS. Survival time was calculated as the time from thymoma diagnosis date until the SEER date of death. Survival analysis was performed using the Kaplan-Meier method and the differences between subgroups were compared using log-rank tests. Propensity score-adjusted multivariate Cox proportional hazards model was built to identify whether prior cancer history impact prognosis independently. Hazard ratios (HRs) and their 95% confidence intervals (CI) were calculated. A two-tailed P value less than 0.05 was considered statistical significance. All analyses were performed using Stata 16.0 (StataCorp, College Station, TX, USA).

The study was conducted in accordance with the Declaration of Helsinki (as revised in 2013). 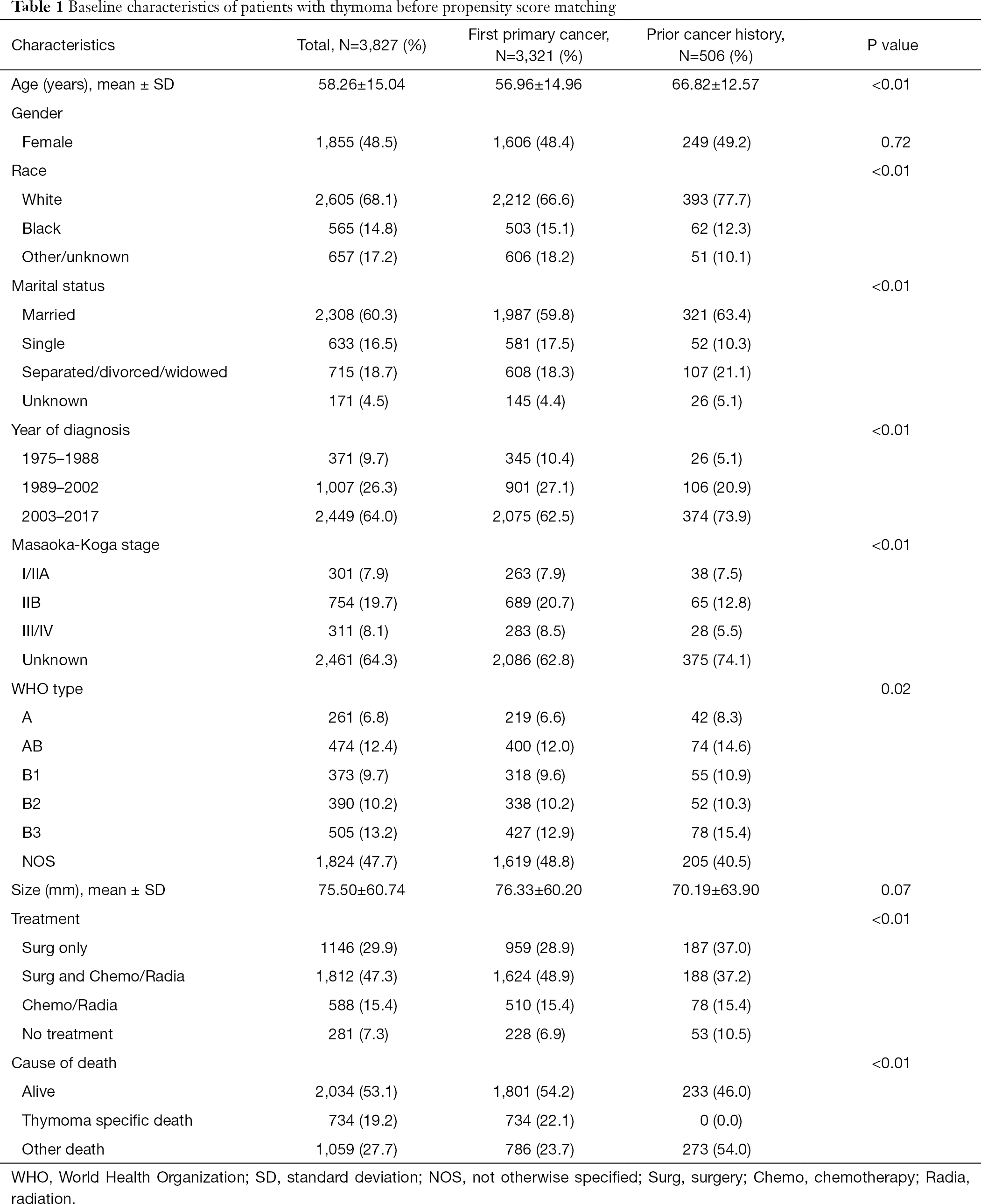 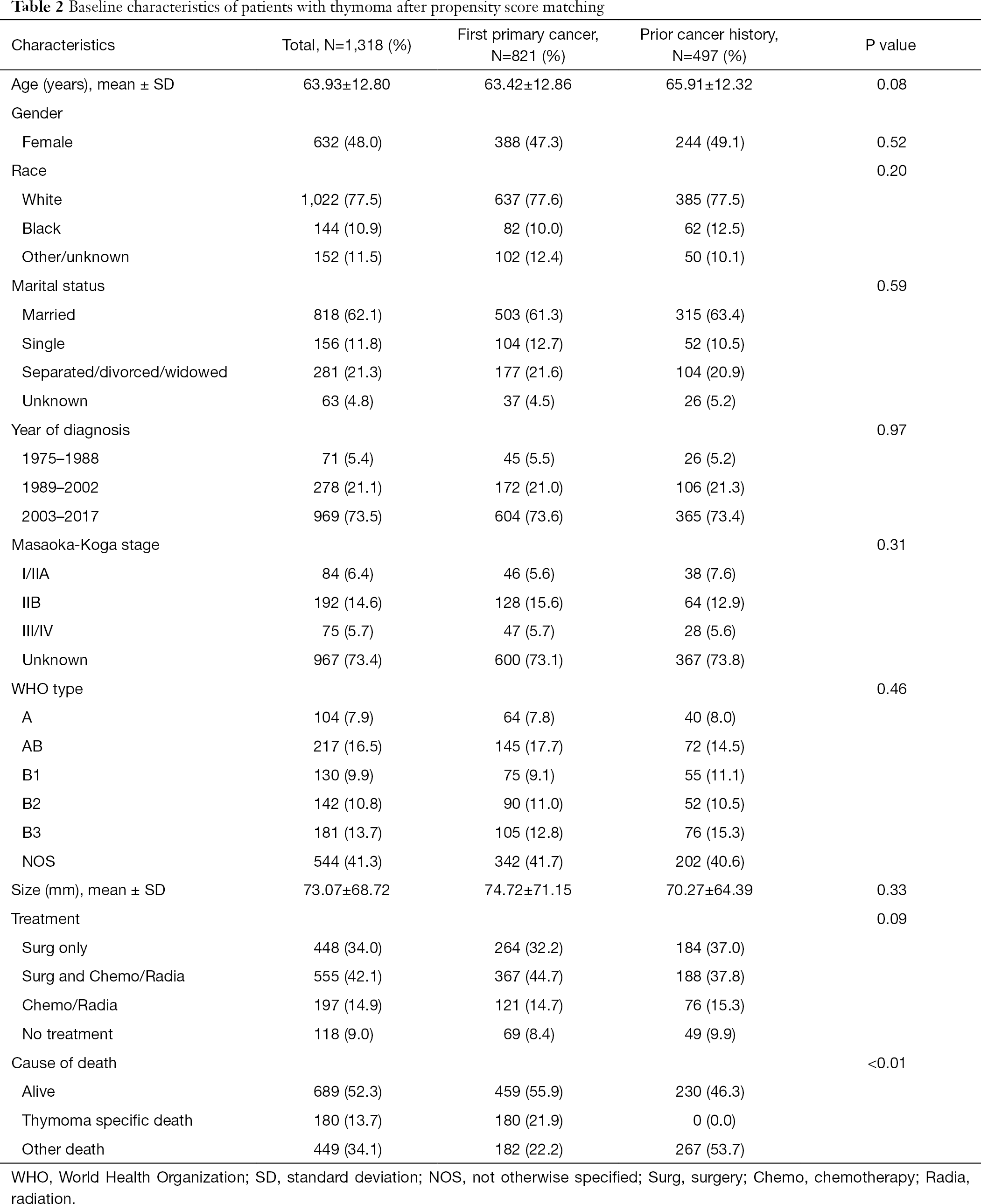 The World Health Organization (WHO) histologic classification of thymomas has been widely adopted. Thymomas are divided into five categories, that is, thymoma types A, AB, B1, B2, and B3. Types A, AB, B1 thymoma take a favorable outcome with 10 years OS between 90% and 95%. Whereas B2 and B3 thymoma have worse OS rates of 75% and 70% at 5 years (10,19-21). The clinical parameters such as thymoma size and age also have prognostic value. Large thymoma size has worse OS and is an independent predictor of recurrence and prognosis (21,22). In our study, subgroup analysis stratified by thymoma size and histologic type displayed that thymoma patients with prior cancer had worse survival compared with patients without prior cancer. It indicated that enrollment of thymoma patients with prior cancer history should be cautious.

The rarity of thymoma makes it difficult to conduct large phase II and III clinical trials, and new drugs are slow in development. More researches are necessary to explore and improve current treatment guidelines. The treatment of thymoma usually requires multidisciplinary therapy. Surgery is the mainstay of treatment as long as thymoma can be removed. Systemic chemotherapy is the current standard treatment for inoperable refractory, metastatic, or recurrent thymoma (10). However, chemotherapy may influence the ability of the thymus to reconstitute T cells and leads to immunosuppression. Preexposure to the prior cancer treatment may influence the study outcomes, such as the adverse and efficacy events.

This study also has a number of limitations. First, prior cancer history was derived from the SEER first malignant primary indicator. Prior cancer can be accurately identified but without detailed characteristics of prior cancer. So we could not include the timing and the type of prior cancer in this study. Second, some valuable information was lacking, such as comorbidities, adverse events, and detailed treatment methods. Therefore, further study is warranted to validate and confirm the generality of our findings.

Reporting Checklist: The authors have completed the STROBE reporting checklist. Available at http://dx.doi.org/10.21037/gs-20-880

Conflicts of Interest: All authors have completed the ICMJE uniform disclosure form (available at http://dx.doi.org/10.21037/gs-20-880). The authors have no conflicts of interest to declare.

Ethical Statement: The authors are accountable for all aspects of the work in ensuring that questions related to the accuracy or integrity of any part of the work are appropriately investigated and resolved. The study was conducted in accordance with the Declaration of Helsinki (as revised in 2013).