A huge malignant phyllodes tumor of the breast with osteoclast-like giant cells: a case report

Pathologically, phyllodes tumor (PT) is a rare type of neoplasms of breasts. The proportion of PTs is 0.3–1% among all breast tumors. According to the World Health Organization (WHO) classification of tumors, PTs can be classified into benign, borderline, and malignant by histological features (1). Osteoclast-like giant cells (OLGCs) have been found in various tumors such as invasive breast cancer, leiomyosarcoma, and undifferentiated pancreatic carcinoma (2-4). But as far as we know, rare cases of malignant PTs with OLGCs in pathological findings were reported (5). We present the following case in accordance with the CARE reporting checklist (available at ).

All procedures performed in studies involving human participants were in accordance with the ethical standards of our hospital research committee and with the Helsinki Declaration (as revised in 2013). Written informed consent was obtained from the patient. A 49-year-old Chinese female presented with a huge breast mass of football size in August 2020. She complained of a palpable mass in her left breast for 2 years, and she didn’t go to the hospital until the mass had grown so rapidly that the tumor ulcerated most of the breast skin within 4 months. The appearance of the tumor was lobulated with massive necrosis and a putrid smell (Figure 1A). She had no previous history of breast neoplasms or other carcinomas. She had some additional symptoms of headache and dyspnea. The reason of the symptoms which we found after examinations was that rapidly growing of the tumor and a big amount of exudate had caused moderate anemia. The amount of hemoglobin was as low as 86 g/L at the beginning and kept dropping. Preoperative imaging tests, including, PET-CT showed no lymph node involvement or distant metastases (Figure 1B). A biopsy was performed before the operation which revealed a malignant tumor with spindle-like cells of marked cellular pleomorphism. However, the final diagnosis of the spindle-like tumor needed extensive sampling and comprehensive assessment. 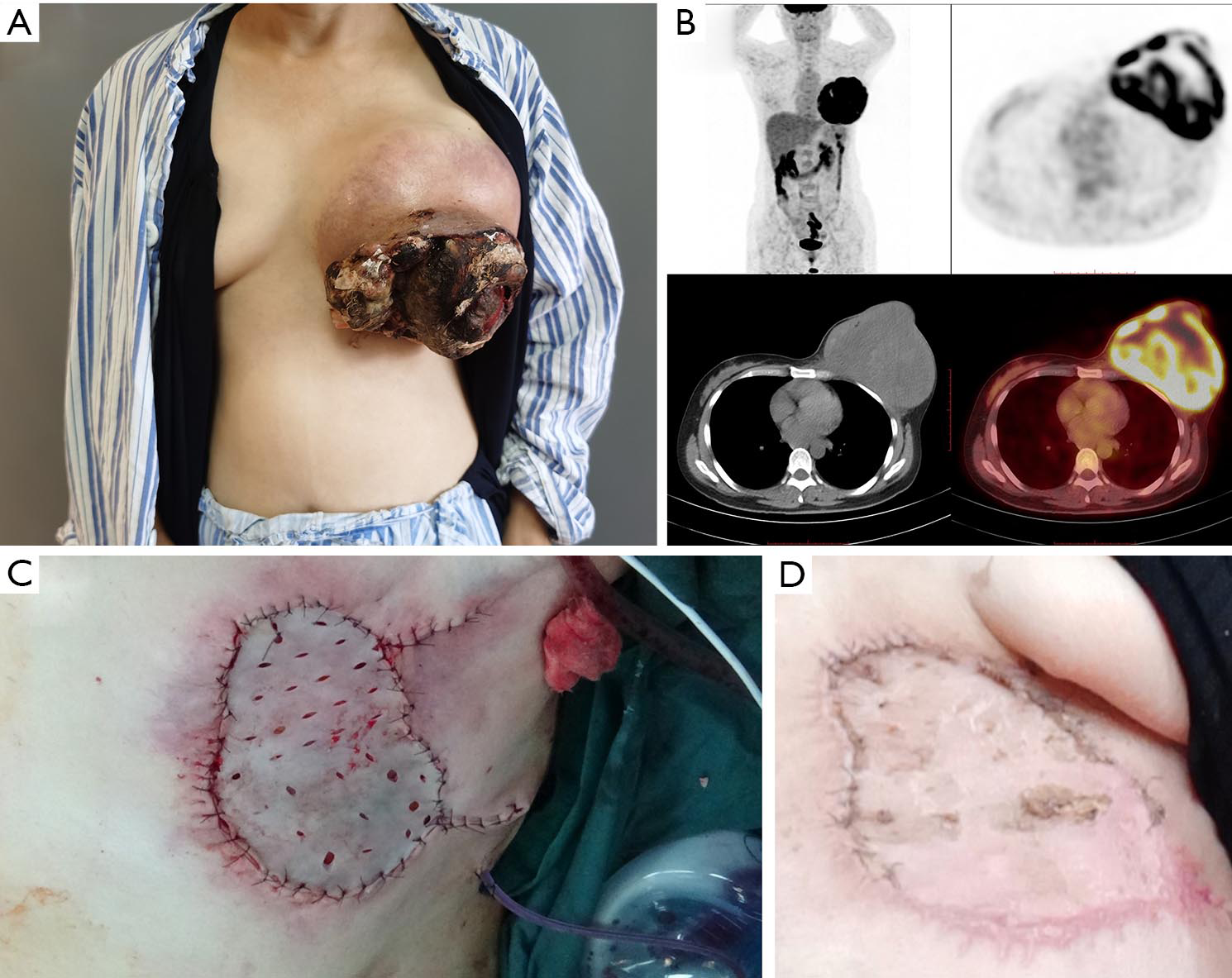 Figure 1 Preoperative appearance and radiologic evaluation, postoperative views after mastectomy and skin graft. (A) Appearance of the tumor when the patient is hospitalized. (B) PET-CT had shown the huge tumor but found no distant metastasis. (C) After the mastectomy, a free skin flap harvested from abdomen was transplanted to the skin defect. (D) 1 month after surgery.

When the patient was prepared for the operation, we performed wide excision including the ipsilateral breast and a part of the pectoralis major below. The resection margin was 2 cm from the tumor border. Transplantation of medium-thickness free skin flap taking from lower abdomen was performed to restore the big wound (Figure 1C). The wound was healed without complications within a month (Figure 1D). The vacuum assisted closure (VAC) system was applied for wound healing in the first week after surgery (Figure 2). The patient left the hospital within 5 days after the surgery. No adjuvant therapy was administered. She was satisfied with the treatment. 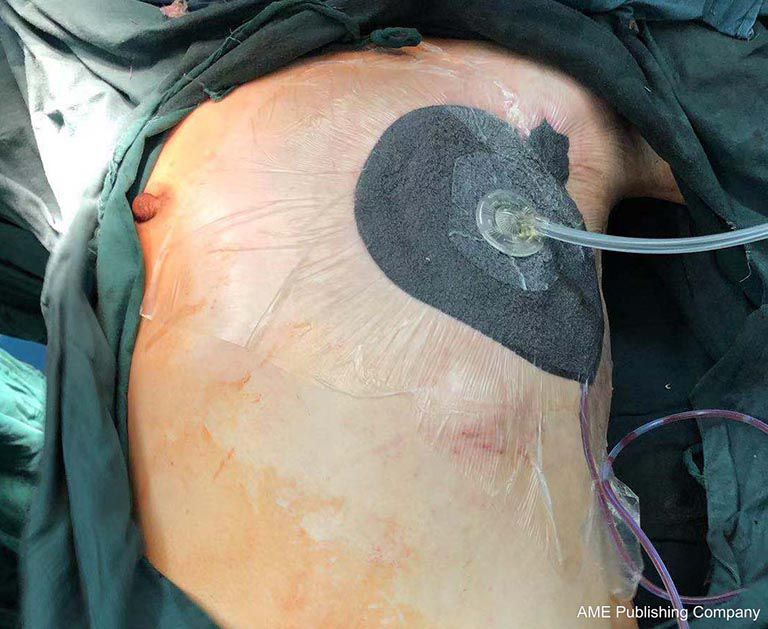 The resection specimen is weighted 1.695 kg and the specific size of the mass is about 23 cm ×21 cm ×6 cm (Figure 3). Diligent sampling was to make the pathological diagnosis comprehensively. In post-operation histopathology observation, pleomorphic spindle-like stromal cells were dominant. Abnormal cells showed marked nuclear pleomorphism, cellular atypia and mitotic activity. At the tumor periphery, adipose tissue was infiltrated by tumor cells. In some regions, leaf-like stromal fronds were found capped by benign epithelium. Many vascular proliferation and focal necrosis were also commonly seen. We had not found any heterologous sarcoma component such as osteosarcoma, liposarcoma, or chondrosarcoma. The stroma was composed almost of non-specific high grade spindle-like sarcomatous component. Surprisingly, in a large number of slices, multinuclear giant cells were scattered over the stromal cell’s background. Immunohistochemically CD68 and vimentin were positive confirming cells to be OLGCs. In spindle-like cells, positive immunohistochemical stain findings were vimentin, PhHH3, and Ki-67 with its proliferation index of 40%. Myo-D1, AE1/AE3, p63 were negative. In endothelial cells, CD34, CD31, and D2-40 were positive. E-cadherin and p120 were negative (Figure 4). The combination of histopathological and immunohistochemical results manifested that the diagnosis was malignant PT with OLGCs. No local recurrence or metastasis was found by imaging examinations after a follow-up period of 3 months. The patient is still undergoing an active follow-up. A timeline was shown in Figure 5 indicating the important events of the disease development and treatment. 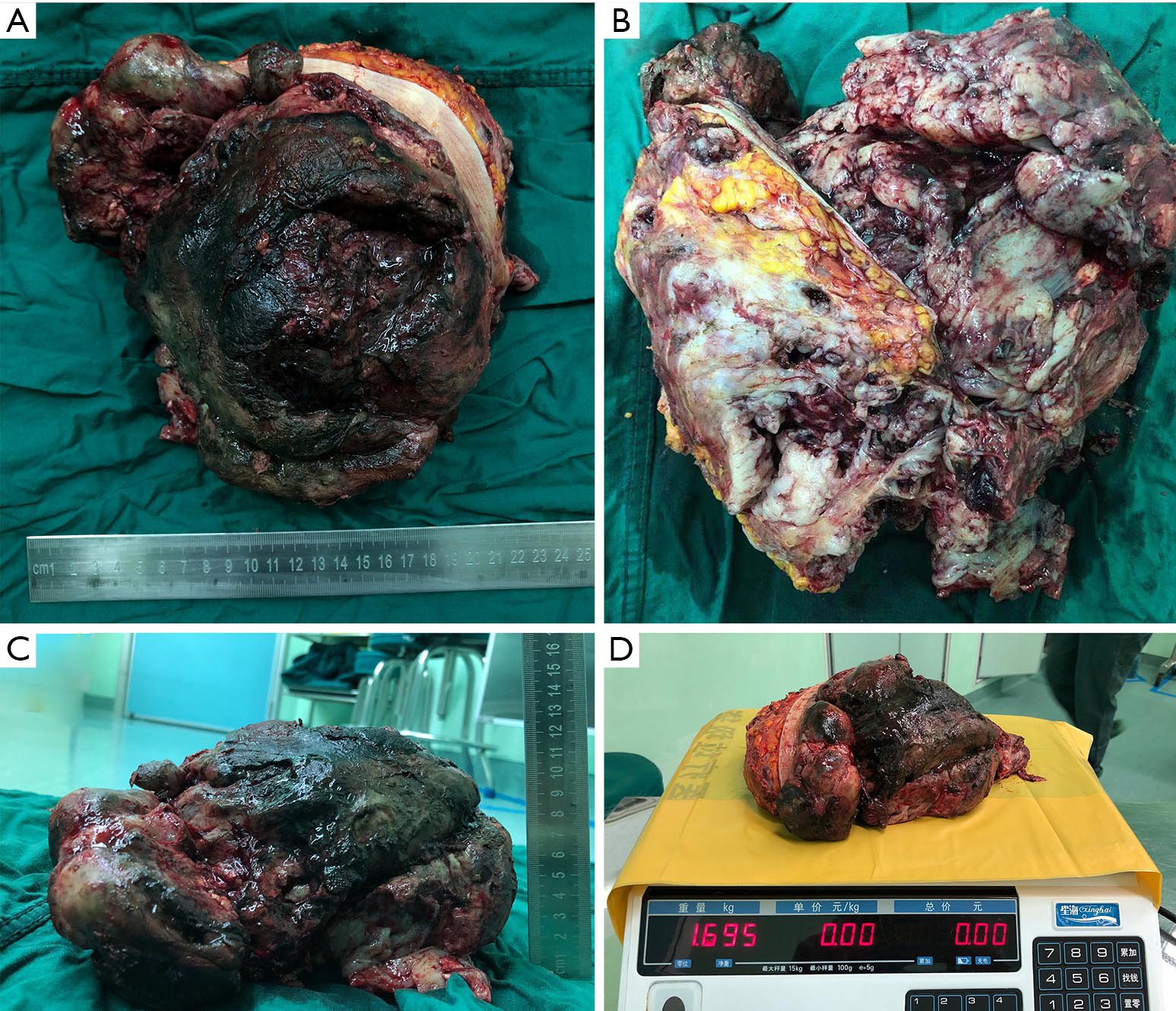 Figure 3 Gross appearance and cut surface of the resected breast specimen. (A,C) The size of the tumor is about 23 cm ×21 cm ×6 cm. The skin was disappeared. (B) Necrosis in cut surface. (D) The resection specimen is weighted 1.695 kg. 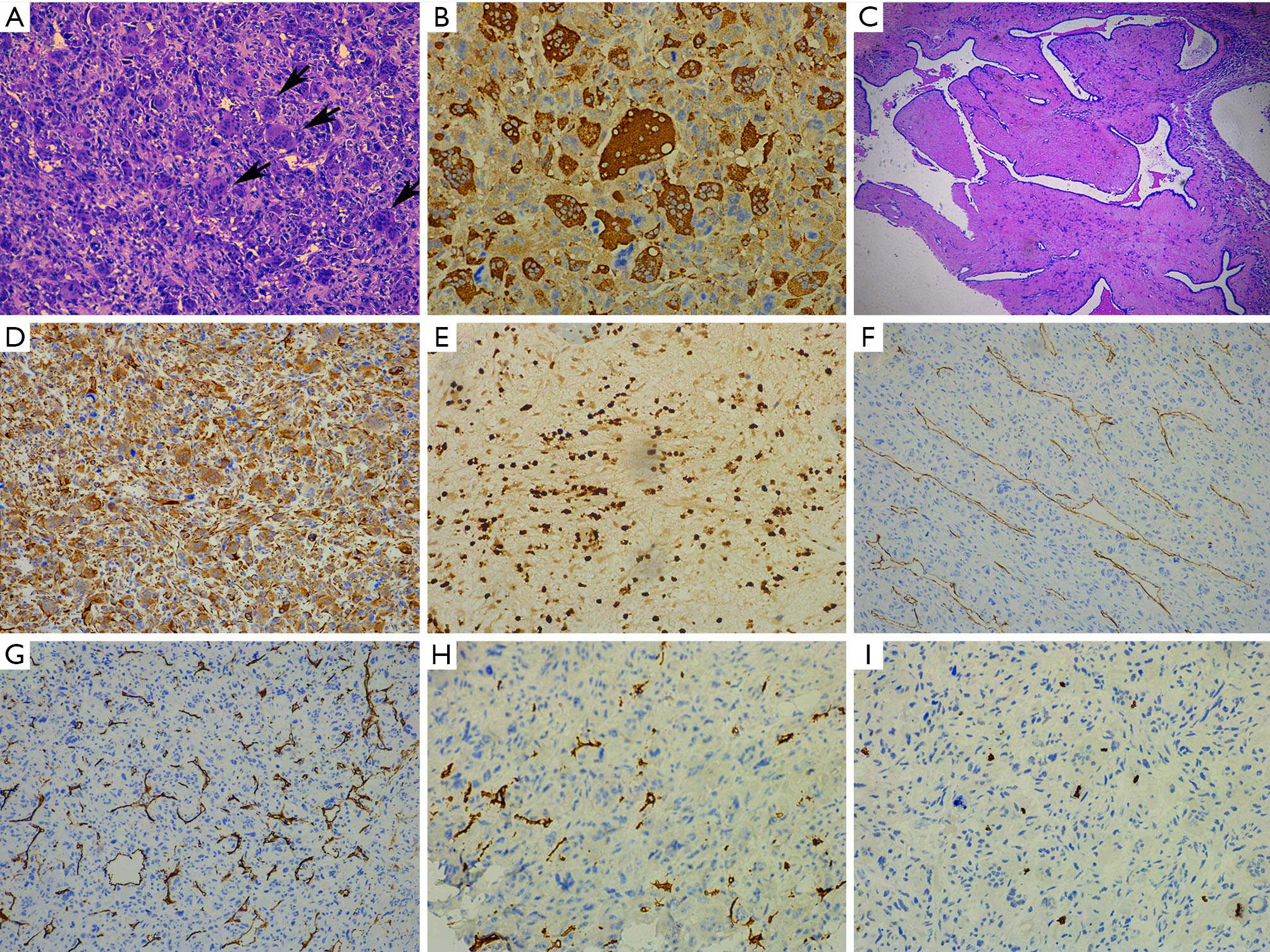 PTs originate from the intralobular and periductal stroma consisting of hypercellular stromal cells and epithelial cells. Currently, the etiology of PTs is unknown. A growing number of studies have suggested its mechanism. Several gene mutations were found in fibroepithelial neoplasms such as MED12, TERT, and RARA which were commonly occurred (6).

Clinically, PTs tend to grow quickly. The average size of PTs is about 4 cm. Compared to borderline or benign PTs, malignant PTs are larger (7). Judged from the appearance, tumors that fungate through the skin as fleshy polypoid outgrowths are always malignant. But neither size nor growth rate is the predictor of the malignancy grade of PTs (8). Although the patient had a 2-year duration and a huge tumor, luckily, no distant metastasis was found through auxiliary examinations. We assumed that the tumor size or the duration of the disease may not be an effective indicator for distant metastasis. Some studies have come to similar conclusions (9).

Microscopically, the main characteristic of the PTs is exaggerated intracanalicular overgrowth forming leaf-like stromal fronds extending into lumina capped by luminal epithelial and myoepithelial cell layers. The diagnosis must be made by extensive sampling due to the heterogeneity of the tumor. The WHO classification of the breast tumors was generally accepted as the grading criteria of the PTs. They suggest that malignant PTs should meet the following criteria: (I) Significant nuclear pleomorphism and proliferation of stromal cells with loss of epithelium under low magnification (40×); (II) ≥10 mitoses per 10 high power fields of 0.5 mm in diameter and 0.2 mm2 in area; (III) increased stromal cellularity and an invasive margin; (IV) meanwhile, the presence of malignant heterologous elements, except well-differentiated liposarcoma, can diagnose malignant PTs even if it has no other features (1). Malignant PTs are often misdiagnosed as sarcomas and metaplastic carcinoma. Spindle-like cells with nuclear pleomorphism and active mitosis are common characteristics of PTs and metaplastic carcinomas. Malignant epithelial elements can be found in metaplastic carcinomas, whereas typical leaflike architectures capped by benign epithelium were presented in PTs. Negative for Cytokeratins (CKs) and p63 can also assist to distinguish PTs from metaplastic carcinomas (9). Morphology can distinguish primary sarcomas of the breast from malignant PTs.

Remarkable findings were OLGCs in our case, which are characterized by bulky cells and multiple nucleuses. OLGCs were found in various malignant bone tumors and epithelial origin tumors. The functions and origins of OLGCs are not clear yet. Usually, they are regarded as a fusion of multiple monocytes (10). Interactions between tumors and OLGCs are still under research. OLGCs were often associated with an inflammatory, fibroblastic, hypervascular stroma in breast carcinomas (1). We observed a large number of hyperplasia vessels within the tumor. The possible reason for the pathological changes has been studied that large amounts of VEGF and MMP12 promote the aggregation of macrophages and angiogenesis around tumor cells (3). Therefore, OLGCs recruited by hemorrhagic and chronic inflammatory foci in tumors may be common cells in tumor pathology process. Undifferentiated carcinoma of the pancreas with OLGCs is also a rare type of pancreatic tumor. This tumor is often a large cystic neoplasm with hemorrhage and necrosis (11). In our case, the tumor as a rapidly growing neoplasm, necrosis and hemorrhage occurred. OLGCs may be reactive cells for ingesting necrotic tissue and hemorrhage. Among breast malignant tumors, a few cases were reported that OLGCs were found in invasive breast carcinomas (10,12). However, OLGCs were rarely found in soft tissue tumors such as malignant PTs. In some cases, OLGCs seem to be considered a better prognosis because breast cancer with OGLCs are 90% luminal A (13). Zhang et al. reported a case of a pancreas carcinoma with OLGCs. They considered the existence of OLGCs had fewer lymph node involvement and better prognosis (4). As few cases of OLGCs in malignant PTs were reported in the literature, therefore, the relationship between OLGCs and prognosis is hard to infer (5).

Wide excision still the prime treatment for malignant PTs. How wide is sufficient for the excision margin is still controversial. According to the NCCN guideline, a 10 mm margin was recommended. Additionally, meta-analysis had proved that ≥10 mm surgical margins benefit for a lower local recurrence risk. Patients with positive margins warrant a re-excision to obtain sufficient margins. Studies based on multicenter data indicate that the incidence of lymph node involvement was less than 1% among malignant PTs (14). Therefore, routine axillary staging or dissection was not generally accepted. Autologous skin grafts are an efficient way for large defects caused by the resection of large tumors. However, pectoralis major must be resected in order to obtain a negative margin. A variety of local flaps or free flaps show better aesthetics and durability than skin grafts (15). Additionally, the VAC system is wildly used in various wounds, decreasing wound morbidity and duration of hospitalization (16).

The locoregional recurrence of malignant PTs was about 23–30% (8). A transformation from benign or borderline PTs to malignant PTs was observed in recurrent cases (17). Due to the deficient number of cases, there were few prospective studies for adjuvant therapy. Most retrospective studies showed that radiotherapy might contribute to the low local recurrence but no benefit to disease-free survival (DFS) or overall survival (OS) (18). There is also no solid evidence that chemotherapy can reduce the rate of recurrence or death (19).

We present a unique huge malignant PT without distant metastasis. We can summarize a few points from this case. First, wide excision including radical mastectomy followed by skin transplantation in a one-stage operation could be a feasible treatment for huge PTs. Second, OLGCs were uncommonly found in malignant PTs. Tumors with OLGCs may have large tumor size, necrosis and hemorrhage. The significances of these cells are not clear yet. Third, malignant PTs could have a very long-time clinical course, and it may not be the indicator for metastasis. Finally, huge tumors and rare types of cells provide an opportunity to explore tumor formation and development. Further research of the molecular mechanism for the OLGCs in malignant PTs may potentially update the interventions of diseases.

Reporting Checklist: The authors have completed the CARE reporting checklist. Available at

Ethical Statement: The authors are accountable for all aspects of the work in ensuring that questions related to the accuracy or integrity of any part of the work are appropriately investigated and resolved. All procedures performed in studies involving human participants were in accordance with the ethical standards of the institutional research committee and with the Helsinki Declaration (as revised in 2013). Written informed consent was obtained from the patient.

Open Access Statement: This is an Open Access article distributed in accordance with the Creative Commons Attribution-NonCommercial-NoDerivs 4.0 International License (CC BY-NC-ND 4.0), which permits the non-commercial replication and distribution of the article with the strict proviso that no changes or edits are made and the original work is properly cited (including links to both the formal publication through the relevant DOI and the license). See: .