The incidence of breast cancer (BC) ranked first and the fifth highest mortality rate (69.5/100,000) among women in China (1). The 5-year survival rate of BC is over 80% in North American and Japan; however, recurrent BC treatment remains a challenge (2-5). Typical metastasis sites of BC in order of frequency are the bones (67.8%), liver (47.8%), lungs (42.6%), brain (15.2%), and peritoneum (peritoneal carcinomatosis, PC) 7.6%. The prevalence of peritoneal metastases was 0.7% (4,6). Chemotherapy and anti-estrogen therapy are common options in treating breast cancer peritoneal carcinomatosis (BC PC); however, the effects of such treatments are poor.

In this paper, we report 4 cases in which BC PC was successfully treated using a combination of cytoreductive surgery and hyperthermic intraperitoneal chemotherapy (CRS + HIPEC) and conduct a literature review to provide new ideas for the treatment of BC PC. The following article is presented following the AME Case Series reporting checklist (available at http://dx.doi.org/10.21037/gs-20-893).

From January 2015 to March 2020, 893 BC patients underwent radical resection at Beijing Shijitan Hospital; 17 of whom had progressive disease with PC. Of these 17 patients, 4 BC PC patients, who underwent CRS + HIPEC, participated in this retrospective study. The remaining 13 patients with BC PC were excluded as they met the exclusion criteria or did not agree to undergo CRS + HIPEC. All patients’ diagnoses of BC PC were confirmed by pathology.

The Ethical Committee of the Beijing Shijitan Hospital approved the study design (BJSJTH2015-28). All of the patients were provided with detailed information about the CRS + HIPEC process and signed informed consent forms. The study was conducted in accordance with the Declaration of Helsinki (as revised in 2013).

The combination of CRS + HIPEC is a standard treatment for PC and has a standard clinical path that includes detailed inclusion and exclusion criteria (7). To be eligible to participate in the study, the patients had to meet the following inclusion criteria: (I) have a clinical picture of BC PC and pathological confirmation; (II) have a Karnofsky performance status score of ≥60; (III) have a normal peripheral blood white blood cell count ≥3.5×109/L, and a platelet count ≥80×109/L; (IV) have an acceptable liver function with bilirubin ≤2× the upper limit of normal (ULN), and aspartic aminotransferase and alanine aminotransferase ≤2× ULN; (V) have an acceptable renal function with serum creatinine ≤1.2× ULN; and (VI) have cardiovascular pulmonary and other major organ functions that could withstand a major operation.

Conversely, patients were excluded from the study if they met the following exclusion criteria: (I) have bone, liver, lung, brain, or other distant metastases; (II) have serum bilirubin, aspartic aminotransferase and alanine aminotransferase levels >2× ULN; (III) have a serum creatinine level >1.2× ULN; (IV) show significant mesenteric in a contracture imaging examination; and/or (V) could not withstand a major operation due to their general status or the functions of their major organs.

The same professional PC treatment team conducted all CRS + HIPEC. The peritoneal cancer index (PCI) was evaluated based on the nature of the ascites, tumor size, and location after the cutting of the abdominal cavity (8) (see Figure 1A). Subsequently, according to the peritonectomy procedures by Sugarbaker, a curative or palliative resection, peritonectomy, lymphadenectomy, or maximum CRS was conducted (9). The completeness of cytoreduction (CC) was evaluated based on residual tumor size (10) (see Figure 1B). HIPEC was carried out immediately after CRS. The HIPEC regimen consisted of docetaxel 120 mg plus cisplatin 120 mg. HIPEC was conducted using the open Coliseum technique (8). Each drug was added to 3 L saline and heated to 43±0.5 °C. The HIPEC time for each drug was 30 mins, and the flow rate was 400 mL/min. Gastrointestinal tract reconstruction, abdominal drainage tube placement, and tension reduction suture incision were performed after HIPEC (11). 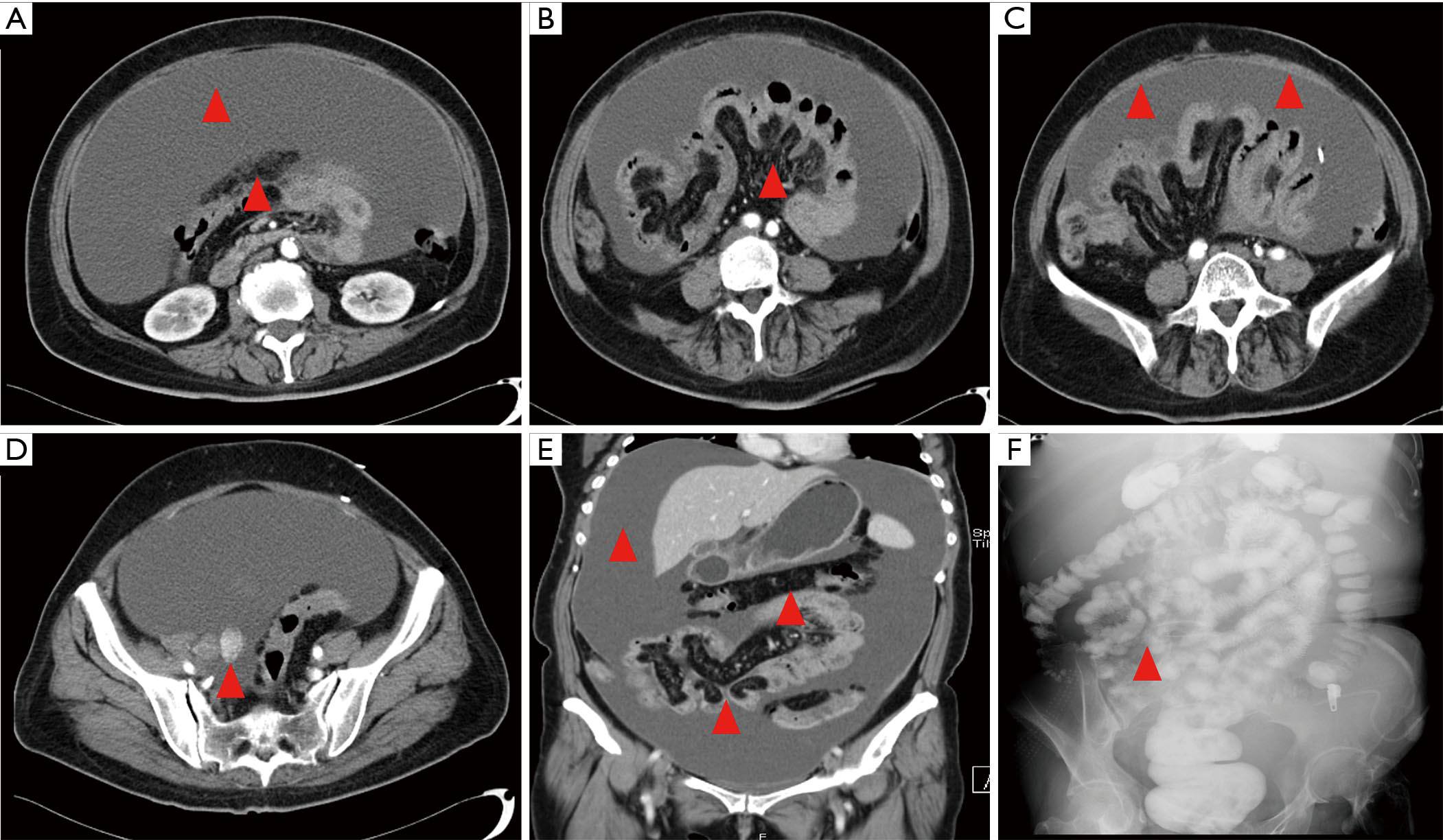 The following definitions were adopted for this study:

Patients were followed up every 3 months for the first 2 years and every 6 months after that. Follow-up items included a physical examination, tumor markers, a breast, and gynecological color Doppler ultrasound, and a chest and abdomen computed tomography (CT). At the last follow-up date of March 1, 2020, the rate of follow-up was 100%.

All 4 patients were female. Patients’ average age was 59.8 (range, 50–65) years at CRS + HIPEC. In terms of pathology, 1 patient had invasive lobular carcinoma (ILC), and 3 had invasive ductal carcinoma (IDC). The molecular typing of primary tumors of all 4 cases was Luminal B. Table 1 shows the major clinicopathological characteristics of primary BC and metastasis PC. 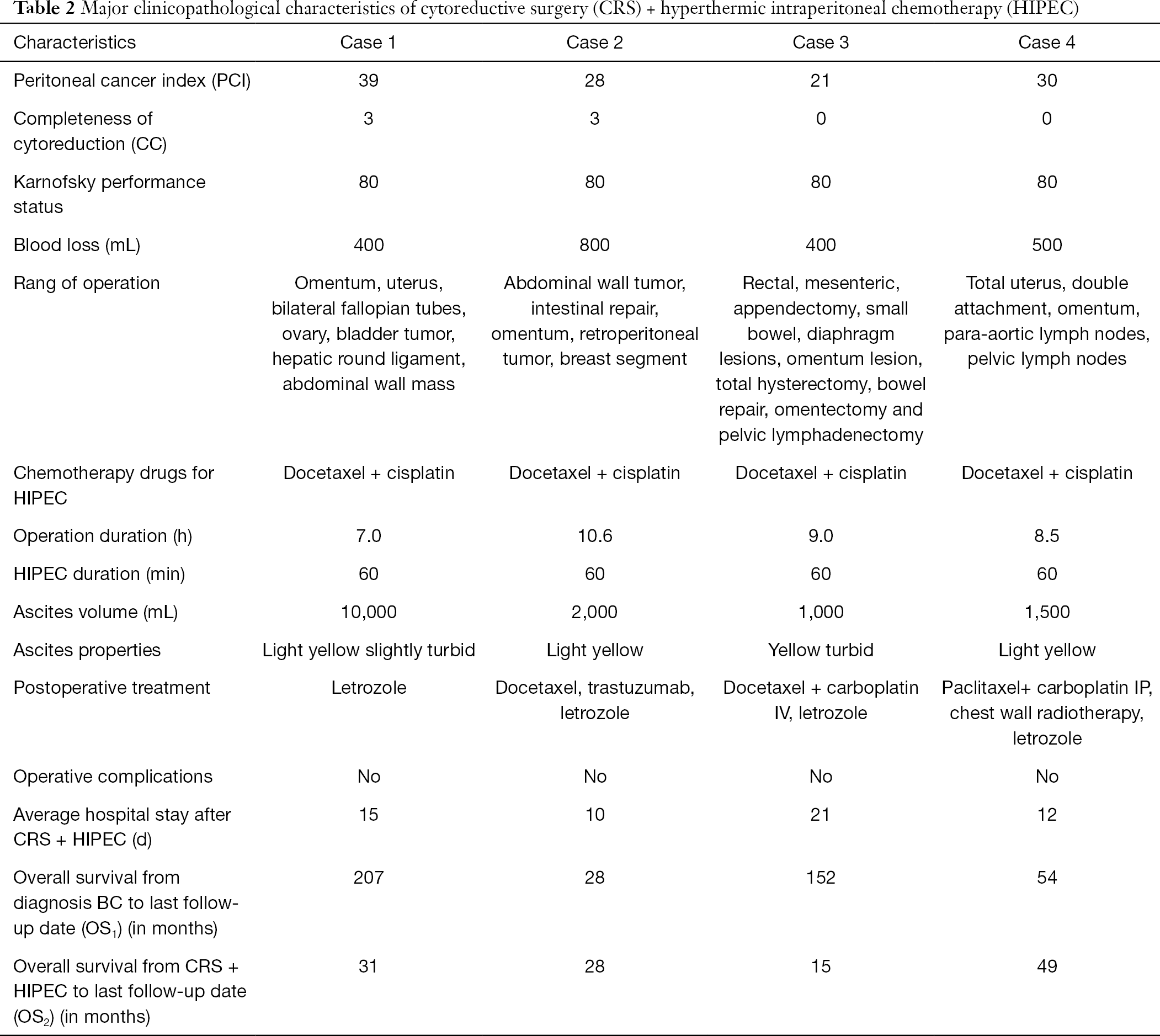 Case 1 displayed incision liquefaction after the CRS + HIPEC; however, no AEs occurred in the other 3 cases. Further, there were no serious adverse events (SAEs) (AE > Grade III) during the perioperative period.

Our study examined the detailed process of CRS + HIPEC and found that patients with BC PC may benefit from this treatment. The results showed that CRS + HIPEC extended BC PC patients’ OS. Further, no SAEs occurred during the CRS + HIPEC perioperative period.

The most common metastasis sites of primary BC with IDC included the regional lymph nodes, lung, liver, bones, brain, and skin. BC with ILC frequently affects the bones, retroperitoneum, peritoneum, gynecological organs, and gastrointestinal tract (14,15). ILC accounts for less than 10% of all BCs, while IDC accounts for more than 90% of all BCs. However, the loss of E-cadherin expression on the surface of tumor cells in patients with ILC leads to more diverse forms of metastasis, and prevents cell adhesion, and promotes tumor cell migration (16). Peritoneal metastasis can be diagnosed by CT or surgery. Only 3% of patients have IDC, while 11% have ILC (P=0.006). Regardless of whether patients have IDC or ILC, PC is a major reason for morbidity and mortality (17). In the present study, 1 patient had ILC, and 3 patients had IDC of the primary BC (Case 1, see Figures 1,2,3). The metastasis tumor and the primary tumor were of the same pathological type. 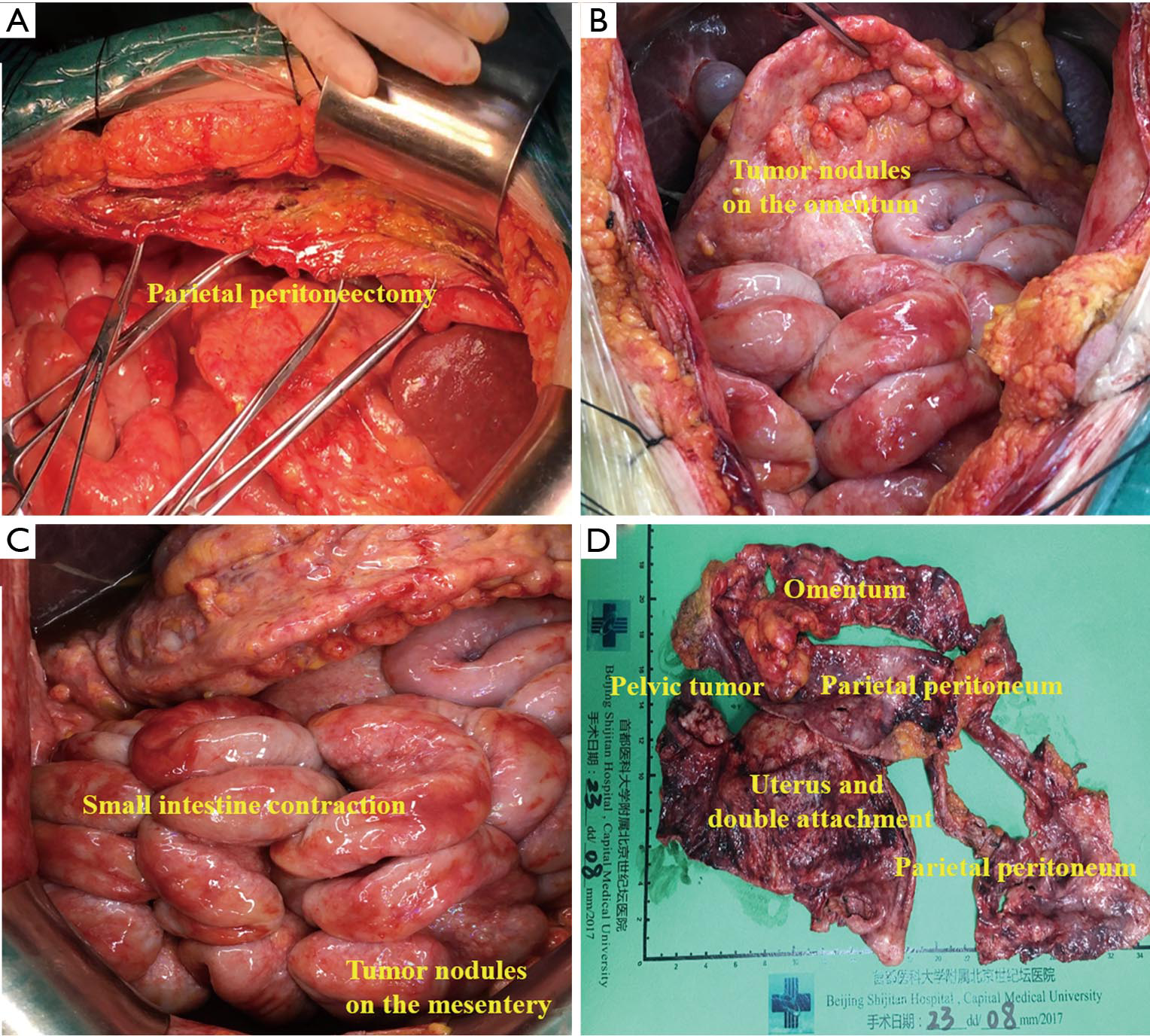 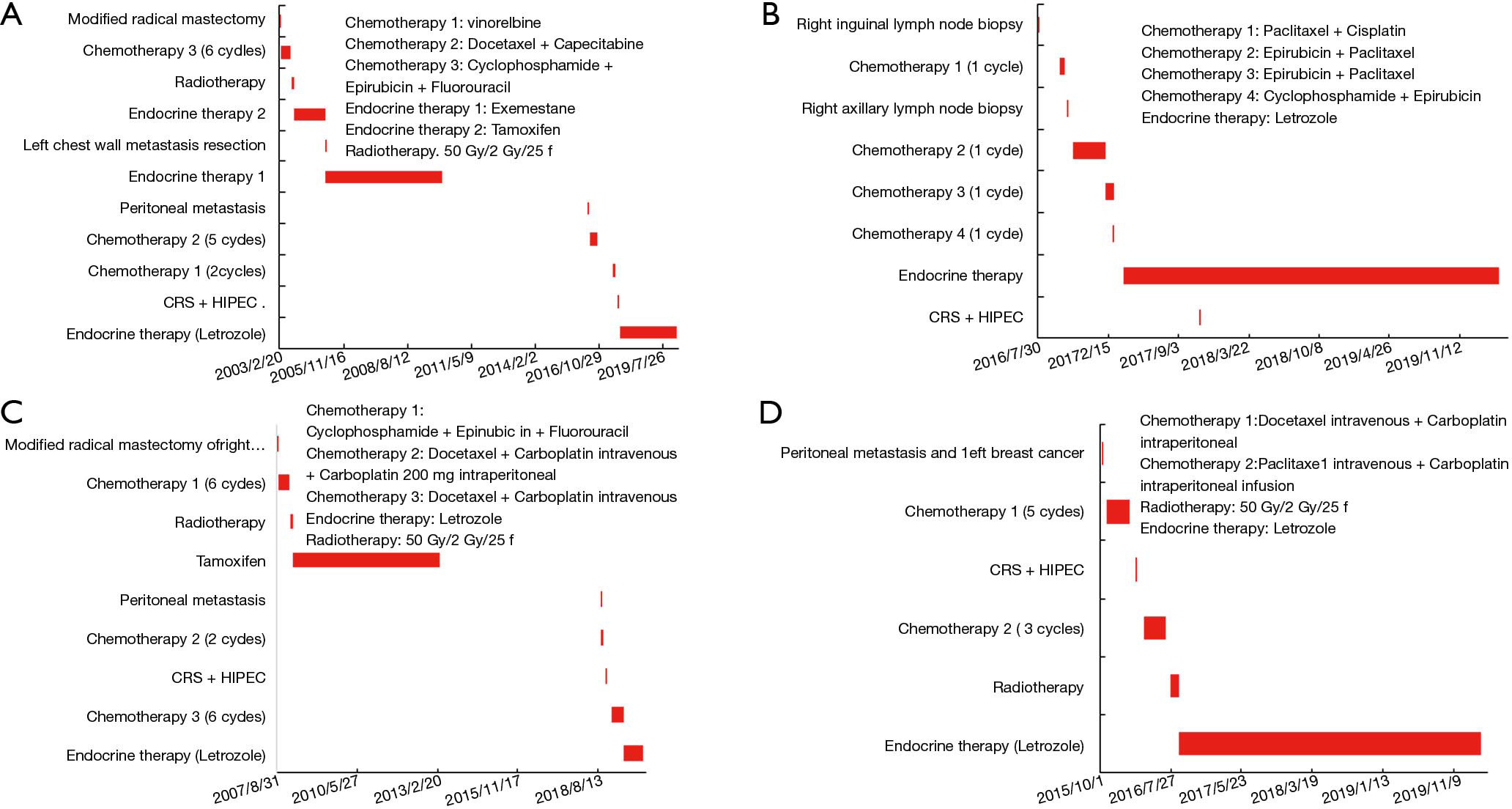 Figure 4 Key treatment methods of 4 cases. (A-D) are the treatment timelines of Case 1 to Case 4, respectively.

BC PC can cause abdominal distension, abdominal pain, and severe intestinal obstruction. All of the patients in the present study displayed at least one of the above symptoms. However, there were no effective treatments to relieve these symptoms, and chronic malnutrition caused poor prognoses. The traditional treatment methods for BC PC are chemotherapy or radiotherapy, but such treatments’ effects are unsatisfactory. The BC PC treatment in our study was CRS + HIPEC. To achieve radical CRS, the median number of resected organs were 7; 2 patients reached a CC score of 0. The tolerance to hyperthermia was higher in normal tissue than tumor tissue. The synergistic anti-cancer effect can be dramatically increased at 43 °C. Hyperthermia could increase the response rates of cancer cells to HIPEC drugs and HIPEC drugs’ depth into the tumor tissues. Finally, loosening the adhesion of the intestine or ileostomy was shown to relieve the intestinal obstruction. In the present study, 1 patient underwent a procedure to loosen the intestine’s adhesion, and another underwent ileostomy, which completely relieved the abdominal distension or bowel obstruction. All of the patients in the study received adjuvant chemotherapy and endocrine therapy pre- and post-CRS + HIPEC. The median OS of 30 months was better than that cited in the literature.

Estrogen plays an important role in the occurrence and prognosis of BC. The estrogen receptor (ER) is an important biomarker in predicting BC prognosis (20). BC patients with ER- and progesterone receptor (PR)- positive had a better prognosis than patients with ER and PR negative (21). Human epidermal growth factor receptor 2 (HER2) regulates cell proliferation, growth, and survival. HER2 is a transmembrane tyrosine kinase receptor (22,23). BC patients with high levels of Ki-67, which is a nuclear proliferation marker, usually have a poor prognosis (24). In the present study, 2 patients had synchronous BC PC (1 had Ki-67 80–90%, and the other was HER2 positive), leading to early peritoneal metastasis. The other 2 cases received standard adjuvant therapy after the primary lesion. All of the patients received tamoxifen treatment for 5 years, and metastasis occurred after 5 years of discontinuation (all 4 cases had positive ERs). After CRS + HIPEC, it was necessary to administer anti-estrogen therapy to hormone receptor-positive BC PC patients. All 4 patients received letrozole orally after CRS + HIPEC and chemotherapy. No tumor progression was detected at the time of follow up.

The average PCI was 29.5, which indicates the difficulty of CRS. The average operation duration was 8.8 h; 7 organs were resected on average. The average blood loss was 525 mL, and the average ascites volume was 3,625 mL. There were no SAEs during the perioperative period, and the average hospital stay was 15 d. The safety of CRS + HIPEC was accepted. Notably, a professional PC treatment team implemented standardized CRS + HIPEC. Thus, the opposite conclusion that CRS + HIPEC was not the treatment of choice cannot be drawn (25). This article provides new ideas and methods for the treatment of BC PC patients. These findings merit further investigation in studies with larger sample sizes.

All 4 patients were satisfied with the treatment effects, especially that their symptoms associated with abdominal discomfort were relieved, and their quality of life was improved.

One disadvantage of this study is due to the small number of patients; a statistical analysis could not be performed. Additionally, as the follow-up time was short, no comparison could be drawn between the control group, and no questionnaires were administered to evaluate quality of life (QoL). Thus, the findings in this study need to be confirmed in future studies with larger sample sizes.

This paper reported 4 typical BC PC cases that were successfully treated with radical comprehensive treatments of CRS + HIPEC. To date, these patients remain in good condition. Patients’ median OS from CRS + HIPEC was 30 months. The 4 cases provide evidence that an integrated therapy of CRS + HIPEC is a promising strategy that could improve BC PC patients’ outcomes.

Conflicts of Interest: All authors have completed the ICMJE uniform disclosure form (available at http://dx.doi.org/10.21037/gs-20-893). The authors have no conflicts of interest to declare.

Ethical Statement: The authors are accountable for all aspects of the work in ensuring that questions related to the accuracy or integrity of any part of the work are appropriately investigated and resolved. All procedures performed in studies involving human participants were conducted in accordance with the ethical standards of the institutional and/or national research committee(s) and with the Helsinki Declaration (as revised in 2013). Written informed consent was obtained from the patients. All data in the study were analyzed anonymously which approved by Beijing Shijitan Hospital ethical committee (approve number is BJSJTH2015-28). The patients gave written informed consent for the publication of their cases.