We present the following case in accordance with the CARE reporting checklist (available at http://dx.doi.org/10.21037/gs-20-640).

A 61-year-old woman presented to the hospital with complaints of lower abdominal pain and distention in august 2017. According to the Patient’s family history, the older brother had gastric cancer. The patient had never been diagnosed with ovarian or breast cancer before.

Abdominal-pelvic computed tomography (CT) imaging revealed both a solid ovarian cystic tumor with numerable ascites in the abdominal cavity and disseminated peritoneal carcinomatosis (Figure 1). To confirm the presence of metastatic disease in other organs, a preoperative chest CT scanning was performed. This revealed an enlargement of both the axillary lymph nodes (r/o metastatic lymphadenopathy). The radiologist recommended further breast evaluation. Breast ultrasound and mammography revealed a mass near the retro mammary space in the left breast. This mass penetrated the pectoralis major muscle and metastatic lymphadenopathy was noted in both axillas (Figure 2A,B). 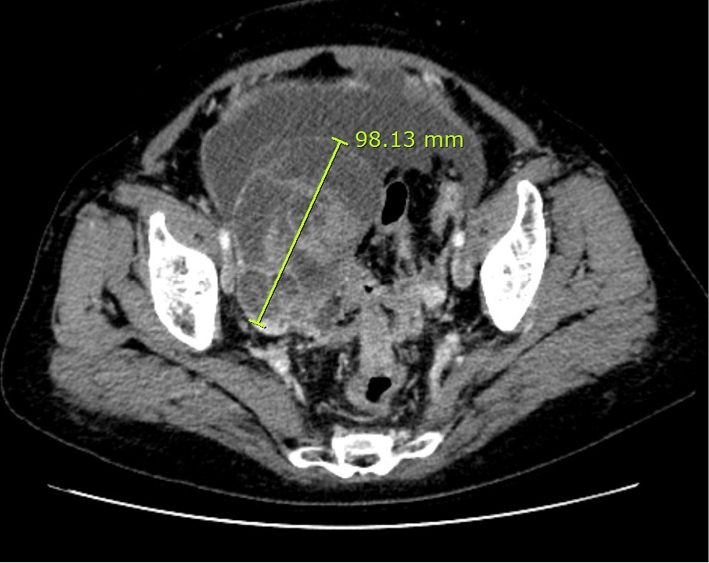 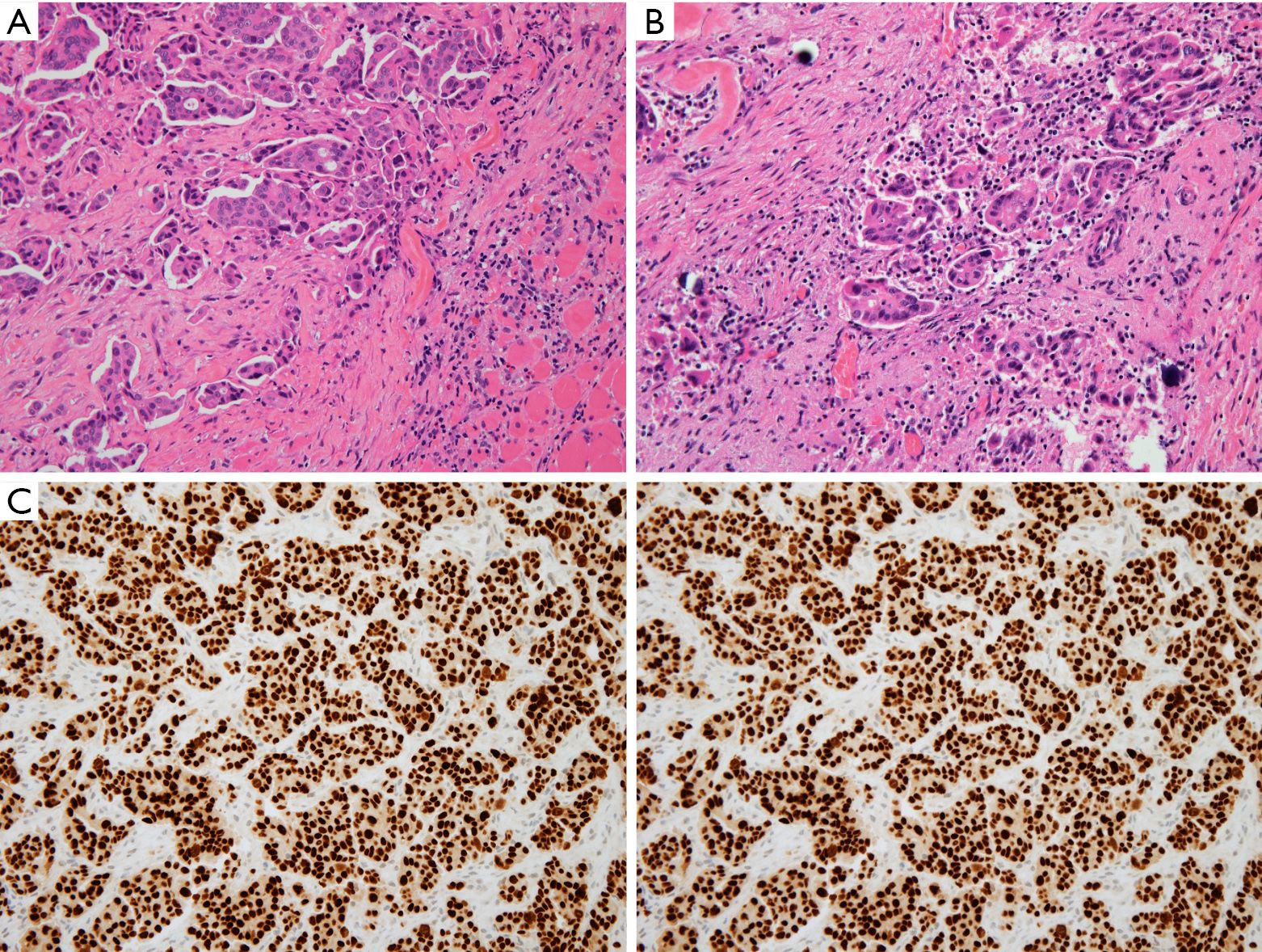 The patient underwent neoadjuvant chemotherapy (Paclitaxel 175 mg/BSA, Carboplatin 5 AUC, every three weeks for three cycles) prior to surgery. This chemotherapy is known to be effective for both breast and ovarian cancer. Under general anesthesia, total abdominal hysterectomy + bilateral salpingo-oophorectomy (TAH/BSO), low anterior resection (LAR) were performed in November 2017. And radical total mastectomy also performed for precise diagnosis and palliative purpose.

The histologic features of the right and left ovaries showed high grade serous carcinomas, measuring 8.8 cm × 7.4 cm and 4.8 cm × 3.7 cm in size, respectively (Figure 3B). Most of the ovary was replaced by a solid tumor mass with cystic area. The resected breast showed multiple tumor masses, ranging from 0.3 to 2.0 cm in size. The histologic features of the ovaries and right breast were similar to each other, with micropapillae and psammoma bodies, which were not detected in previous core needle biopsied specimen (Figure 3C). Immunostainings for PR, p53, WT-1, and PAX8 were positive; however, ER and GATA3 were negative, and Ki-67 index was 80%. Lymph nodes from the breast and the ovaries, rectum, and omentum showed consistent findings. The final diagnosis was high grade serous carcinoma of the ovaries, and metastases to the left breast and rectum, including the regional lymph nodes.

Adjuvant chemotherapy was administered (Paclitaxel 175 mg/BSA, Carboplatin 5 AUC, every three weeks for six cycles) after surgery. We checked for side effects at each chemotherapy cycle. There were mild nausea, dyspnea and moderate tingling in both hand, foot. But the patient could tolerate it.

Positron emission tomography/computed tomography (PET/CT) was conducted In June 2018. This imaging showed residual tumor; hence, palliative chemotherapy (doxorubicin 40 mg/BSA, bevacizumab 10 mg/kg) was administered. After 4 cycles of palliative treatment, we discussed about prognosis with patient and she refused more treatment. Follow up has been lost since September 2018.

All procedures performed in studies involving human participants were in accordance with the ethical standards of the institutional and/or national research committee(s) and with the Helsinki Declaration (as revised in 2013). Written informed consent was obtained from the patient. This study was approved by the Institutional Review Board (IRB) of the Pusan National University Yangsan Hospital (IRB No. 05-2020-153).

Breast cancer is the most frequently diagnosed primary cancer in women. Breast cancer almost always originates from the mammary glands, and most metastatic breast cancers originate from the contralateral breast (3). Advanced ovarian cancer typically demonstrates peritoneal dissemination or lymph node metastases in the abdominal cavity; distant metastases are rare. However, ovarian cancer occasionally metastasizes to the liver, pleura, or lung, and the prognosis of ovarian cancer patients with distant metastasis is poor (7).

Distinguishing primary breast cancer form metastatic breast cancer is very difficult because imaging findings are not specific and diagnostic (9). Generally, almost breast metastases are detected by mammography, and typically consist of a round and clear-margined mass. There are seldom unclear margins, and microlobulated shaped masses are rare. Furthermore, there is generally no evidence of microcalcification or architectural distortion on mammography (2). Calcifications are not usually present in patients with metastases to breast from ovarian cancer because of the presence of psammomatous bodies (10-13) and then most lesions of this type often founded in the subcutaneous layer of the breast mammary gland because of the rich blood supply to this region and axillary lymph node metastases are seldom revealed, compared with primary breast cancer (14).

The treatment and prognosis of primary breast cancer and metastasis to the breast from ovary are very different. Breast metastasis from ovarian cancer may disseminate widely and it is associated with a poor prognosis. The mean-survival time was previously reported to range from 13 days to 3.5 years (15-17). However, many patients have survived in less than one year after the diagnosis. Statistics on prognosis show that the 1-year survival rate is about 40% (12) the treatment of choice for metastasis from ovarian cancer is generalized systemic chemotherapy with appropriate chemotherapeutic agents (platinum based chemotherapy) and cytoreductive surgery to reduce tumor burden, whereas surgical management should be considered diagnostic and palliative (NCCN guidelines version 1.2020).

If the metastatic breast lesion is not larger or positioned in the deep tissue layers, and if there are no symptoms, palliative surgery also should not be considered. If only patients have a symptom, a mastectomy should be performed for only palliative purposes (18).

For these reasons, accurate and precise diagnosis is very necessary to make a treatment plan. The treatment plan should be determined considering combined data from an accurate medical history, physical examination, imaging studies analyses and definitive biopsy results. Therefore, surgeons could not perform unnecessary mastectomy.

When initial diagnosis, imaging studies revealed both ovary cancer and metastasis to breast concurrently in our case. There are other two possibilities which secondary ovarian cancer and primary breast cancer and double primary breast cancer and ovarian cancer as co-morbidities. Differentiating between primary and secondary ovarian cancer can be a difficult task. In hereditary conditions breast malignancies and primary ovarian cancer often coexist. BRCA1 and BRCA2 mutations are responsible for the concomitant occurrence of these two cancer types. Specifically, women with BRCA1 alterations have a high risk of developing breast (85%) and ovarian (40–60%) cancer, whilst women with BRCA2 mutations have a similar risk of breast cancer as with BRCA1 mutations and 15–30% probability of developing ovarian cancer (19,20). The bare suggestion that only core needle biopsy results, it could not be possible to distinguish primary cancer from secondary cancer. Although the possibility of primary breast cancer could not be ruled out absolutely, we decided that the possibility of metastatic carcinoma from the ovary is higher than the one of primary breast cancer considering as a history of ovarian cancer. Metastatic breast cancer must be excluded by appropriate histopathological examination. Although the resection of the breast lesion does not positively affect the prognosis for metastasis to breast from ovary, it appears to be important to have an adequate specimen in order to establish the precise diagnosis. Follow above, the most common histological type of breast metastases from ovary would be serous papillary carcinoma contained psammoma bodies (8). But in our case, the core needle biopsy result of breast lesion revealed a micropapillary lesion with no psammoma bodies. It makes us unable to make an accurate diagnosis before surgery. So, radical mastectomy concurrently with ovarian cancer surgery was performed. This surgical intervention was very effective method for both treatment and diagnosis, because our patient have complained pain for breast lesion also and the specimen from mastectomy can present more precise and exact histopathological results for diagnosis.

Reporting Checklist: The authors have completed the CARE reporting checklist. Available at http://dx.doi.org/10.21037/gs-20-640

Conflicts of Interest: All authors have completed the ICMJE uniform disclosure form (available at http://dx.doi.org/10.21037/gs-20-640). The authors have no conflicts of interest to declare.

Ethical Statement: The authors are accountable for all aspects of the work in ensuring that questions related to the accuracy or integrity of any part of the work are appropriately investigated and resolved. All procedures performed in studies involving human participants were in accordance with the ethical standards of the institutional and/or national research committee(s) and with the Helsinki Declaration (as revised in 2013). Written informed consent was obtained from the patient. This study was approved by the Institutional Review Board (IRB) of the Pusan National University Yangsan Hospital (IRB No. 05-2020-153).