Surgical treatment for primary hyperparathyroidism (PHPT) involved the standard of bilateral cervical exploration and localization for all four glands with removal of grossly enlarged glands until the 1990s (1). Subsequent improvements in the accuracy and reliability of preoperative localization studies have allowed for the development of targeted minimally invasive surgical approaches to the parathyroid glands. Targeted parathyroidectomy with intraoperative parathyroid hormone (IOPTH) currently constitutes the co-gold-standard procedure for PHPT with results equivalent to bilateral cervical exploration and has become the preferred procedure by most endocrine surgeons (2,3). Various approaches to avoid a neck scar via minimally invasive or remote incisional access have been developed for parathyroidectomy (2). In particular, the robotic-assisted transaxillary approach to the thyroid and subsequently parathyroid glands was developed in South Korea and adopted by surgeons in the United States and Europe who have published various case reports and studies on small series of these procedures as they require an experienced surgeon with high volume of cases (2,4). In addition to that, the long procedure time, and the high cost when it compared to the conventional approach make them less popular (4).

As the authors have also continued to perform a large series of robotic-assisted parathyroid surgeries, we seek in this study to present and analyze the data from our cumulative experience, so as to evaluate the safety and feasibility of robotic-assisted transaxillary parathyroidectomy in patients with PHPT in a series of procedures performed in the Western population at our respective North American and European institutions. We present the following article in accordance with the STROBE reporting checklist (available at http://dx.doi.org/10.21037/gs-20-761).

This is a two institutions study of retrospectively collected data from two tertiary centers, Tulane Medical Center in New Orleans, Louisiana, USA and the American Hospital of Paris in Paris, France. This study was approved by the institutional review boards of Tulane Medical Center (IRB reference number: 2020-264). Individual consent for this retrospective study was waived. The study was conducted in accordance with the Declaration of Helsinki (as revised in 2013). Patients who underwent robotic-assisted transaxillary parathyroidectomy from July 2010 to July 2019 for management of PHPT were included. Demographic characteristics and perioperative data including the complications and outcomes were collected, analyzed, and reported. The surgical technique was performed as previously described by the authors in earlier publications (3,5-7). Both surgeons have a relatively the same level of robotic experience in neck surgeries. The operation was not offered to patients with previous neck irradiation, suspicion of malignancy (parathyroid carcinoma), previous neck surgery, non-localized/equivocal disease, suspicion of multi-gland disease, neck mobility problems and cervical spine disease, or with significant comorbidities, as defined by having an American Society of Anesthesiologists Classification greater than two (ASA >2). All patients underwent ultrasound and sestamibi scans for preoperative localization. Flexible laryngoscopy was performed in all patients preoperatively and postoperatively. These cases represent the initial cases of transaxillary parathyroidectomy by both surgeons. Cure was defined based on Miami criteria as a >50% PTH drop from either the greatest pre-incision or pre-excision PTH measurement in a sample of blood drawn 10 min following complete resection of a hyperfunctioning gland.

For the purposes of defining a learning curve, operative time was used as a surrogate for procedural proficiency. Operative time was defined as the time of incision to the time of skin closure and was plotted as a function of case number. A simple moving average (SMA) of order 3 was then calculated for the series, in a method similar to prior literature describing the learning curves for remote-access approaches to the thyroid (8). 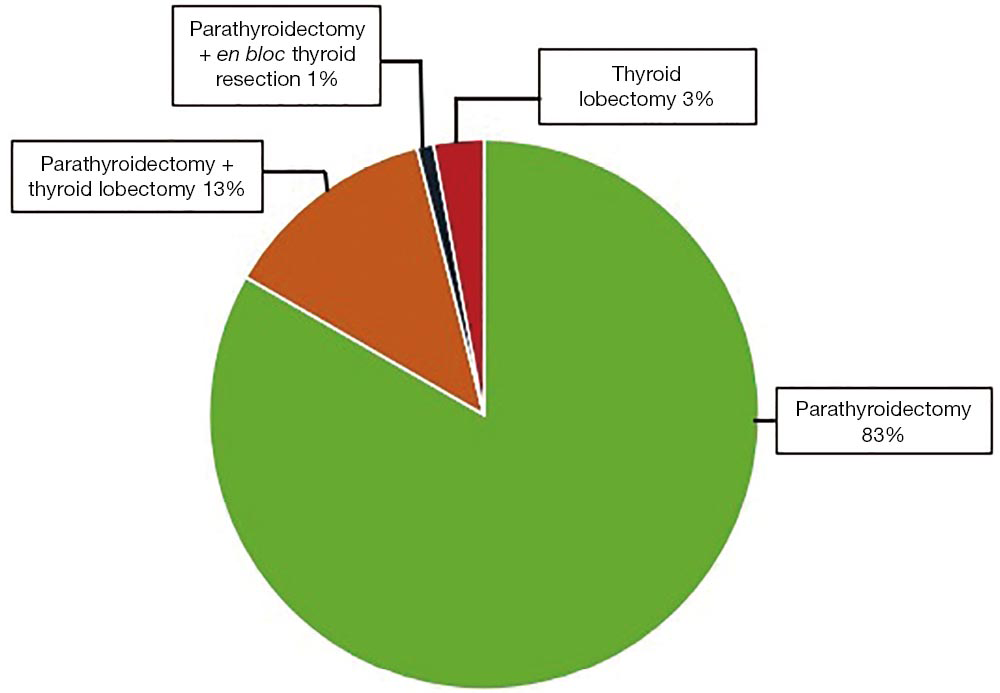 Intraoperative monitoring of serum intact PTH levels was performed, and in all but one case there was a greater than 50% drop in serum PTH level value after excision of the pre-localized parathyroid glands. In one patient, the serum PTH level remained high after excision of the targeted gland, and the operation was converted to a conventional open trans-cervical approach (TCA) for bilateral neck exploration and subtotal parathyroidectomy. After the subtotal parathyroidectomy, IOPTH dropped more than 50%. The median weight of the resected parathyroid glands was 1.1±0.8 gm. Seventy-three patients (71.5%) were discharged on the day of the surgical procedure, and the remaining 29 patients (28.5%) were observed overnight and discharged on the first post-operative day. Post-operative laboratory values demonstrated a median 1-week postoperative serum PTH level of 39±22.1 pg/mL and median postoperative serum calcium level of 9.2±0.64 mg/dL. Median duration of follow-up was 6.5±12.2 months for this cohort, and recurrent PHPT was reported in one case, Table 1.

Two patients (1.96%) developed postoperative complications. One seroma, defined as collection of clear serous fluid under the skin at the incision site with no signs of infection including pus formation, occurred and was managed conservatively, resolving after 10 days. One superficial wound infection was managed with oral antibiotics in outpatient setting. Flexible laryngoscopy was performed at the first postoperative visit and confirmed normal vocal cord mobility in all patients, and there were no reported cases of permanent vocal cord paralysis.

A linear regression model was used to evaluate the learning curve for the first 25 and 56 robotic-assisted transaxillary single-adenoma parathyroidectomy cases in both centers, respectively. At Tulane Medical Center, proficiency was obtained after the 8th case with a decline in operative time from 170 to 100 minutes. Subsequent to this drop, there was a stabilization in mean operative time at 95.6±13.5 minutes. At the American Hospital of Paris, proficiency was obtained at the 14th case, with a decline from over 300 to 126 minutes. The latter part of the curve showed continuous gradual improvement, reaching a median operative time of 91.5±33.9 minutes. With continuous improvement, both surgeons were able to finish the operation in 40 minutes, Figures 2,3. There was no significant difference in patients’ BMI between the two institutions (P value >0.05). Also, there was no difference in the patients’ BMI during the learning phase and the proficiency phase, Figure 4. 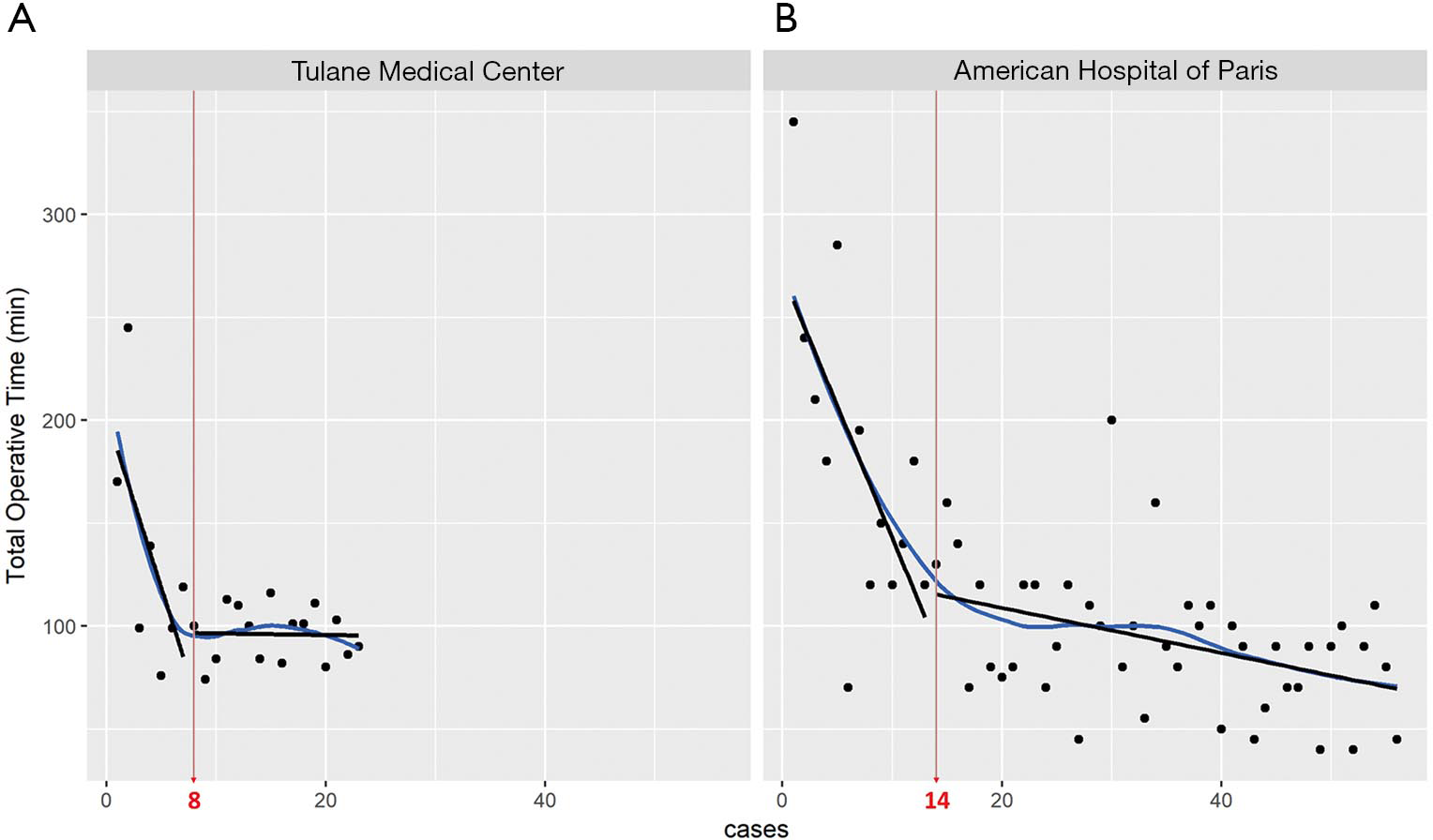 Figure 2 Learning curve to assess the rate of progression and mastery of the robotic transaxillary parathyroidectomy. X-axis represents the number of cases arranged by order, while the Y-axis represents the time taken during the procedure. As the surgeon learns to operate the robot following the procedural steps, he becomes faster and more proficient at using the machine. Dispersion around the line highlights the variations and outliers. The slopes of learning phase (–16.714x + 202.14 and –13.514x + 274.09, respectively) were compared with the slopes of proficiency phase (–0.0779x + 97.146 and –1.1039x + 131.15, respectively), and they were significantly different (P<0.001). 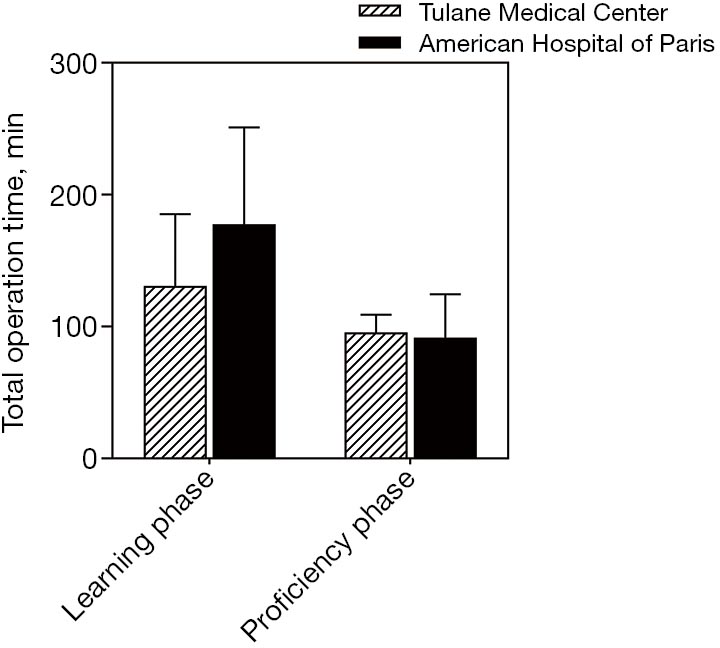 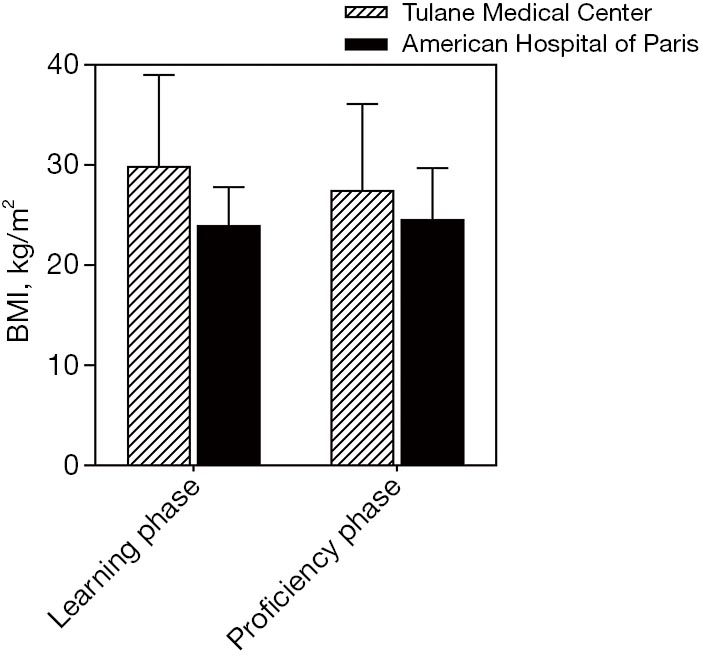 The robotic-assisted transaxillary approach has many advantages which have been documented previously in the literature for thyroid surgery. It does not require carbon dioxide (CO2) insufflation (20,21). The use of the surgical robot allows three-dimensional (3D) visualization which gives more perceptional depth and magnification, in addition to an increased amount of free motion in the robotic arms, which allows for precise tissue manipulation and dissection within a limited working space, such as the neck or superior mediastinum (16,21-23) This access to the superior mediastinum has allowed for robotic removal of ectopic glands, as documented by Ismail et al. (24). The current series documented by the authors included two patients with intrathymic adenomas removed successfully by the robotic-assisted transaxillary technique.

Limitations of robotic-assisted remote access approaches for neck surgery documented in the literature include the need for an experienced, high-volume surgeon, strict patient selection criteria, prolonged operative time compared to open surgeries, and the high cost of the procedure (20,21). One of the unique limitations to the robotic-assisted remote access approaches is the complications related to the flap as a larger area of subcutaneous tissue dissection is required with this approach. Studies shows contradictory results as some reported a less pain with the robotic-assisted remote access approach and other reported a mild post-operative symptom related to the flap including pain and paresthesia (21). The mean operative time for this series was 116±53 minutes, which is shorter than others documented previously in the literature, likely due to a larger volume of cases in the series (4,16). Our learning curve and proficiency analysis demonstrated a progressive reduction in total operative time from over 5 hours to under an hour. We also note that various factors can impact the total operative time, including familiarity of the entire operating room team with the procedure, since teams who perform a large volume of these cases will be used to the equipment and processes involved.

Despite these reported limitations, robotic-assisted transaxillary parathyroidectomy is a viable option for patients who are motivated to avoid a visible neck scar. Various studies in the literature have addressed this topic, with some studies noting that patient interest in having a scarless neck procedure was as high as 65% to 75% of those surveyed (25,26). Eye-tracking technology has shown that neck scars are noticeable enough to draw the visual attention from the face to the scar site (27,28). Additionally, studies of the Dermatology Life Quality Index (DLQI), a questionnaire used to measure the impact of skin diseases and scars on patients’ quality of life, have demonstrated that DLQI values are much higher in patients with post-thyroidectomy neck scars (9.02) than those with hypertrophic and keloid scars (7.79, normal control 0.58) (29). The mean DLQI value in patients with post-thyroidectomy neck scars was also slightly higher than the DLQI of patients with psoriasis (8.73) (30). These findings highlight the potential benefits of remote-access surgical techniques for thyroid and parathyroid surgery such as the remote-access transaxillary parathyroidectomy highlighted in our study.

Potential complications of robotic-assisted transaxillary parathyroid surgery include brachial plexus injury from patient positioning, as well as damage to structures including the internal jugular vein, trachea, esophagus, and thoracic duct. None of these major complications had been reported in the literature, but the risk is still present (11,17,21,31). In this study, the complication rate from robotic-assisted transaxillary parathyroidectomy is generally comparable with that reported from the conventional cervical approach (32). We routinely perform monitoring somatosensory evoked potentials (SSEP) during robotic-assisted transaxillary surgery (Biotronic, Ann Arbor, MI, USA) to avoid brachial plexus injury, as described previously by the authors (33). However, many other robotic surgeons do not use SSEP monitoring and have been able to avoid this serious complication by careful positioning of the arm. With regards to disease-specific complications, our data showed evidence of recurrence in one case, with a mean post-surgical follow-up time 6.5 months. None of our patients developed persistent disease. The risk of treatment failure (recurrence or persistent disease) is similar to that documented for the conventional cervical parathyroidectomy approach (34,35).

Robotic-assisted transaxillary parathyroidectomy is a safe and feasible procedure for select patients with PHPT when conducted by experienced surgeons. Proficiency was achieved in both cases in fewer than 15 cases. Patients who are motivated to avoid a cervical incision should be considered for remote access parathyroidectomy options including robotic-assisted transaxillary surgery.

Reporting Checklist: The authors have completed the STROBE reporting checklist. Available at http://dx.doi.org/10.21037/gs-20-761

Conflicts of Interest: All authors have completed the ICMJE uniform disclosure form (available at http://dx.doi.org/10.21037/gs-20-761). EK serves as the Editor-in-Chief of Gland Surgery. The other authors have no conflicts of interest to declare.

Ethical Statement: The authors are accountable for all aspects of the work in ensuring that questions related to the accuracy or integrity of any part of the work are appropriately investigated and resolved. The study was approved by the institutional review board of Tulane Medical Center (IRB 2020-264) and individual consent for this retrospective analysis was waived. The study was conducted in accordance with the Declaration of Helsinki (as revised in 2013).