Tall cell carcinoma of the breast with reverse polarity (TCCRP), also known as the tall cell variant of papillary breast carcinoma (TCVPBC), is a rare histological type of breast cancer that resembles the tall cell variant of papillary thyroid carcinoma (PTC) in morphology. Although its pathological diagnosis may be challenging, its prognosis is generally favorable. Since 2003, when Eusebi et al. described the first five cases and denominated as the breast tumor resembled the tall cell variant of papillary thyroid carcinoma (BTRPTC) (1), several cases have been reported by different institutions around the world over the past 17 years. Due to the featured morphological characteristics of the papillary structures lined by eosinophilic columnar mitochondrion-rich cells with nuclear grooves and nuclear pseudo-inclusions, TCCRP is easily to be associated with PTC, as the breast is not an uncommon site for metastasis, and about 5% of all such cases originate in the thyroid. However, neither the results of the immunohistochemical markers related to the thyroid origin nor the genetic evidence (e.g., RET/PTC rearrangements and BRAF mutations), which may produce the morphological expression supporting the connection between this disease and thyroid tumor. Thus, Masood et al. proposed that the terminology should be changed from “breast tumor resembling the tall cell variant of papillary thyroid carcinoma” to “tall cell variant of papillary breast carcinoma” to prevent unnecessary relevant studies being conducted that sought to exclude the association of this lesion with PTC (2). In 2016, Chiang et al. redefined the tumor as a discrete subtype of breast carcinoma, the solid papillary carcinoma with reverse polarity (SPCRP), based on its unique histologic and genetic properties (3). In 2019, this type of disease, referred to as TCCRP, was recognized as a separate entity in the 5th edition of the World Health Organization (WHO) series on the classification of breast tumors. The population of breast cancer patients in China is large and increasing gradually; however, to date, no report appears to have been published on the rare disease of TCCRP. In this paper, we report on the first case diagnosed as TCCRP in China, and show the characteristic morphologic, immunohistochemical and molecular features of this disease. We also use next-generation sequencing (NGS) to analyze its genetic mutations, and to confirm the presence of specific hotspot mutations (IDH2 and PIK3CA).

We present the following case in accordance with the CARE reporting checklist (available at http://dx.doi.org/10.21037/gs-20-695.

This study examined a 45-year-old Chinese woman who had a gradually enlarged left breast mass for 2 years before being diagnosed in August in 2019. She had no prior history of cancer. On physical examination, the tumor was found to be located in the upper outside quadrant of the left breast. A mammary ultrasonography showed that a hypoechoic area of 1.0×1.2×1.2 cm3 in size at 2 o’clock, with an irregular shape, unclear boundary, blood flow signals at the periphery, and category 4C rating under the Breast Imaging Reporting and Database System (BI-RADS) (Figure 1). The mammography revealed a disorganized glandular structure tumor rating category 4 under the BI-RADS (Figure 2). The patient underwent wide local excision and sentinel lymph node biopsy (SLNB) as treatment. 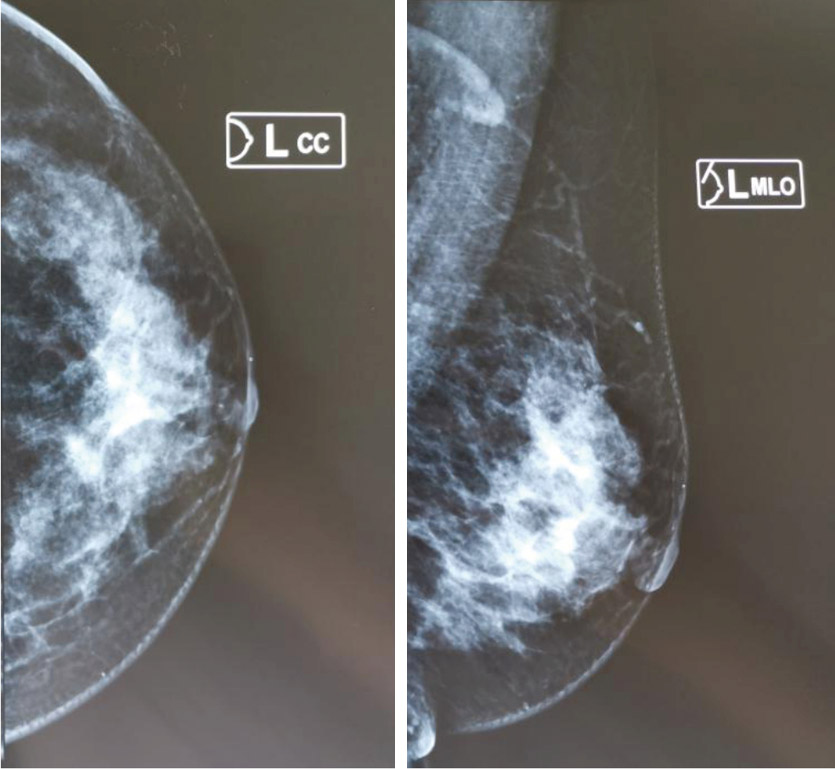 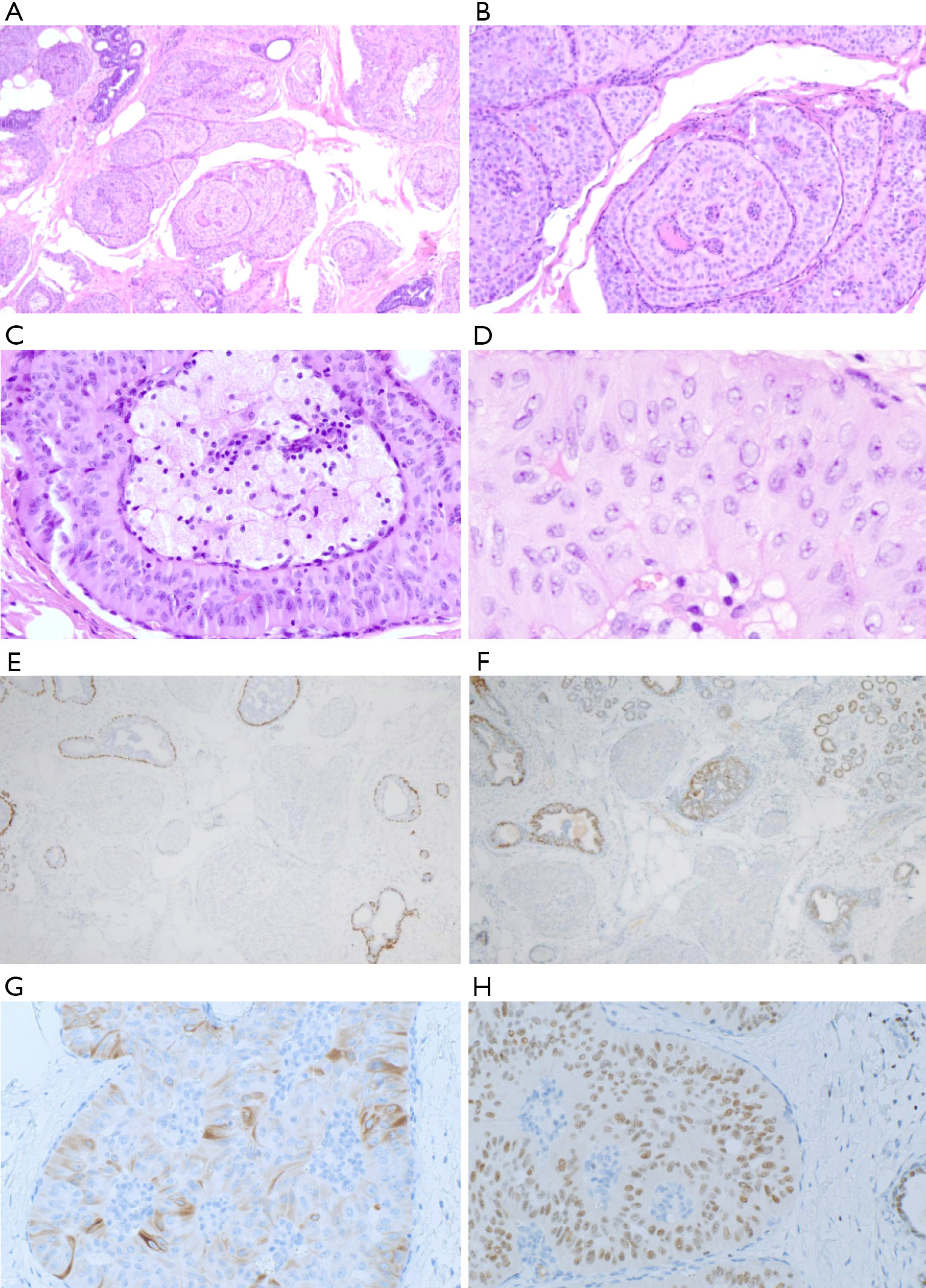 The immunohistochemical results showed that the tumor cells were negative for ER, PR, HER-2, S-100, TTF-1, Thy, CgA, Syn, and p53, but showed positivity with variable extent and intensity for AR, CK5/6, GATA3, GCDFP-15 and, Mammaglobin. The Ki-67 proliferative index was low (5%). Both p63 and CK14 immunostaining showed an absence of myoepithelial cells around and within the tumor nests (see Figure 3E,F,G,H). GCDFP-15 and mammaglobin were both positive, indicating that the tumor originated from the breast tissue. Additionally, as both TTF-1 and Thy were negative, this helped to rule out thyroid cancer distant metastasis. Furthermore, no significant abnormality was found in the thyroid ultrasound examination. A molecular genetic analysis using targeted NGS was conducted. The result showed concurrent IDH2 hotspot mutation (p.R120G) and PIK3CA hotspot mutation (p.H1047R) (Figure 4).

All of the procedures performed in this studies involving the human participants were conducted in accordance with the ethical standards of the relevant institutional and/or national research committee(s) and with the Helsinki Declaration (as revised in 2013). Written informed consent was obtained from the patient.

As the incidence of TCCRP is low, it is difficult to conduct a valuable retrospective analysis of the disease from independent case reports or small-scale cohort studies. However, we comprehensively reviewed relevant articles (15 in total) published from 2003 to date, and extracted key information including demographic, clinicopathologic, and immunohistochemical data, along with hotspot gene sequencing results (Tables S1,S2), to detect meaningful patterns by expanding the sample size (1-15). After eliminating the repeated cases from among the above-mentioned studies, a total of 74 cases (including this present case) remained. The median age of all patients was 64 years (range, 45–85 years); patients aged ≥60 accounted for 70.1% (52/74). The median tumor size was 1.3 cm (range, 0.6–5.0 cm). Of the tumors, 81.6% (58/72) were smaller than 2 cm. In 42 patients for whom details of the specific operation method were provided, breast-conserving surgeries (BCSs) and mastectomies were performed in 37 cases (88.1%) and 5 cases (11.9%), respectively. Of the 13 patients who underwent exact axillary surgeries, SLNBs were performed for 9 cases (69.2%) and axillary lymph node dissections (ALNDs) for 4 cases (30.8%). However, 90.3% (28/31) of the patients were negative for lymph nodes. In terms of adjuvant therapy, 65.6% (21/32) of patients neither received chemotherapy nor radiotherapy; 54.5% (6/11) received chemotherapy, and 81.8% (9/11) received radiotherapy. The median follow-up time was 29 months (range, 3–132 months), at which time 94.1% (32/34) of patients were alive and well, local recurrence had occurred in 1 patient, and bone metastasis had occurred in 1 patient.

Based on the above statistics analysis, our analysis revealed that this type of tumor was more common in elderly women. Patients usually received BCSs, and SLNBs were often carried out indicating a low rate of lymph node metastasis. Chemotherapy and radiotherapy were not often used in postoperative adjuvant therapy, but patients could also have a good prognosis. The TNBC subtype proportion was significantly higher than that of other types. Nearly 90% of the patients harbored the IDH2 mutation, and 60% harbored the concomitant PIK3CA mutation.

Papillary tumors of the breast are diagnostically challenging lesions and represent a wide spectrum of diseases from papilloma to invasive papillary carcinoma (PC) (16). In support of the notion that TCCRP is a variant of PC, Hameed et al. showed that these unique cytological structure characteristics were not limited to it, and that one or more of them could be also found in some other subtypes of breast PC (17). Conversely, Alsadoun et al., by making comparisons with other benign or malignant breast papillary lesions in the morphologic, immunohistochemical, and molecular profiles, contended that this disease was a singular breast neoplasm that can be distinguished from others (10). In Toss’s study, 75 PC of breast cases previously diagnosed in routine practice were reviewed again and compared with 10 TCCRP cases to determine whether TCCRP constitutes a distinct disease or is just a PC variant (18). Toss concluded that the introduction of this new disease should be accompanied by sufficient evidence for its identification and classification in routine practice. Zhong et al. used the NGS technique to detect the molecular characterization among them, however, as none of the conventional solid PCs demonstrated a IDH2 mutation, Zhong et al. were of the view that the tumor is unique in terms of its histology and molecular profile (13).

Among the 21 types of breast cancer histologic subtypes detailed by the WHO (19), very few genotype-phenotype correlations are known to harbor distinct recurrent genetic alterations. TCCRP is the first type of breast cancer to be associated with IDH mutations, which are more commonly detected in glioma, acute myeloid leukemia, chondrosarcoma, and cholangiocarcinoma (20). More researchers have begun to explore the role of IDH mutations in tumorigenesis and progression, and have also begun to propose clinical considerations for the treatment of IDH-mutated tumors based on emerging clinical data from mutant IDH1/2 inhibitor trials. Functional studies conducted by Chiang et al. showed that IDH2 and PIK3CA hotspot mutations are the likely drivers of TCCRP, resulting in its reversed nuclear polarization phenotype, and thus can constitute its molecular definition (3). Lozada et al. reported that high frequencies of IDH2 R172 and PIK3CA hotspot mutations were present in their patient cohort (12). Pareja et al. further demonstrated that the immunohistochemical analysis of IDH2 R172 was highly sensitive and specific for the detection of IDH2 R172 hotspot mutations, and was likely suitable as a diagnostic tool for evaluating the excisions and core needle biopsy materials of TCCRP (14). Notably, IDH2 R120, rather than the IDH2 R172 mutation, was detected in our case, a finding that has not been reported in previous studies. Our results indicated that IDH2 mutations in other sites could also exist in TCCRP, and these should be taken into consideration when undertaking immunohistochemical analyses of IDH2.

In summary, this paper reported the first case of TCCRP diagnosed in China. Additionally, a comprehensive literature review was performed to examine some of the significant clinical and pathological features. The results of this review provide in-depth insights into TCCRP that could assist in the diagnosis and treatment of this disease. the diagnosis and treatment of this disease. It is essential that physicians and pathologists recognize that TCCRP may have its own specific clinical and pathological characteristics so that a standardized management approach can be developed. Further research using molecular biology techniques should be conducted in the future to characterize this unique entity.

Reporting Checklist: The authors have completed the CARE reporting checklist. Available at http://dx.doi.org/10.21037/gs-20-695

Ethical Statement: The authors are accountable for all aspects of the work in ensuring that questions related to the accuracy or integrity of any part of the work are appropriately investigated and resolved. All of the procedures performed in studies involving human participants were conducted in accordance with the ethical standards of the relevant institutional and/or national research committee(s) and with the Helsinki Declaration (as revised in 2013). Written informed consent was obtained from the patient.