Exploring the lengthiest ambulatory breast surgery clinic appointments: is the patient the problem?

Outpatient clinic appointments are ubiquitous in clinical medicine and surgery. Myriad factors pressure physicians and healthcare providers to spend only as much time as is needed on each encounter (1). Several variables can increase or decrease ambulatory visit duration including disease complexity, the involvement of trainees, and patient factors such as late arrival time (2-4); however, there is a paucity of data regarding the extreme outliers whose appointments are the longest. Lengthy appointments can disrupt schedules for providers, patients, and families, both those directly involved in the protracted appointment, and everyone seen hence in clinic that day (5). This can in turn affect patient satisfaction and the perception of care received, with ramifications for institutional funding and referrals (6). It is not known whether the individual patient is the primary determinant of an extremely long appointment, or if other factors such as unexpected findings to communicate or a large number of pre-appointment tests to review are the principal contributors.

The study was designed as a single-institution retrospective cohort study. Outpatient breast surgery clinic appointments at a single institution (Roswell Park Comprehensive Cancer Center) from January 1, 2017 to May 21, 2019 (inclusive) were identified, and the corresponding data from a real-time patient tracking system included in this study. Each appointment and the medical record number (MRN) corresponding to the patient attending that appointment was captured in the dataset. The appointment duration, measured from check in time to check out time [total appointment length (TAL)], was calculated using the precise clock times recorded by the clinic registration staff, rounded to the nearest minute. Appointments missing values for either check in or check out times were excluded from analysis. Time spent away from the breast surgery clinic (i.e., if a patient was seen in the clinic, then was sent for an imaging test, then returned to clinic with the results) was subtracted from the appointment duration from the time the patient left the clinic area to the time they returned. The patient tracking system also recorded the clinicians involved in each appointment, including trainees (residents or fellows) and advanced practice providers (APPs). Trainees saw patients under the attending surgeon’s supervision (the trainee saw the patient first, then the attending). APPs saw some patients under the attending surgeon’s supervision, and other patients independently for pre-determined designated appointments (i.e., surveillance, high risk follow-up).

Appointment duration was treated as a continuous variable. The longest 1% of appointments were identified, and a primary chart review performed of corresponding clinic records (notes) contained in the institutional electronic medical record. Data extracted included AM vs. PM appointment start time, appointment type, the type of clinicians involved (attending MDs, APPs, trainees), the scheduled appointment duration (30, 45, or 60 minutes), and whether the patient received unexpected news at that appointment. Unexpected news was defined as including a diagnosis of recurrent cancer, as well as other findings identified by either the healthcare provider or patient such as positive genetic test results. Scheduled appointment duration was determined prior to the visit by the clinic scheduling team, and generally corresponded to the appointment type (new patients scheduled for 60 minutes, routine follow-up appointments for 30 minutes). Also recorded were the number of test results (imaging studies, pathology reports, genetic tests) reviewed at that appointment, calculated by counting the number of test results included in that clinic note, as well as whether or not the patient underwent a test (imaging, biopsy) at the institution that day. Routine laboratory tests (i.e., bloodwork) were not included. The patient corresponding to each appointment was identified using their MRN, and the following data abstracted for each patient: age at appointment; body mass index (BMI), number of comorbidities (excluding breast disease); presence of one or more psychiatric comorbidities; smoking status (current or former smoker vs. never smoker); and presence of a known or suspected genetic disorder.

Descriptive analysis was performed and non-parametric tests (Mann-Whitney U, Kruskal-Wallis) used to compare patient characteristics between individuals with consistently protracted vs. sporadically protracted appointments. Results were presented as median values with inter-quartile ranges (IQRs). Due to the small size of the cohort, multivariable analysis was not performed. Two-sided hypothesis testing was employed for statistical analyses, and statistical significance established at an alpha of 0.05. SPSS version 25 was used for all analyses.

The study was conducted in accordance with the Declaration of Helsinki (as revised in 2013). The study was approved by the institutional ethics board of Roswell Park Comprehensive Cancer Center (No. 00001124) and individual consent for this retrospective analysis was waived. 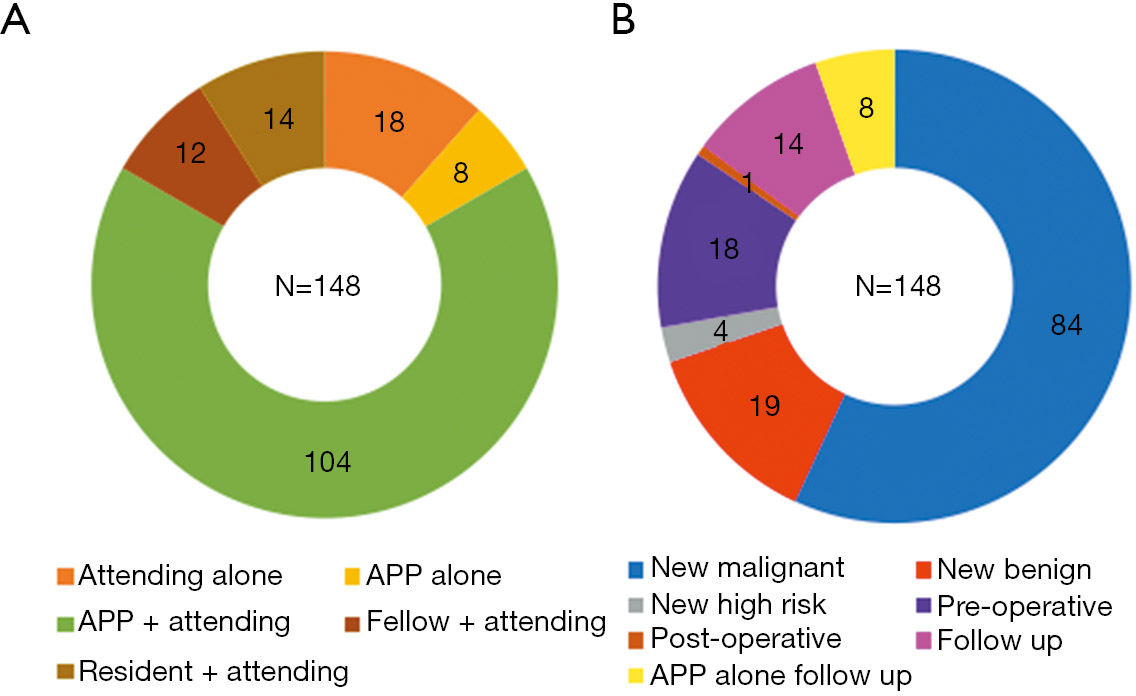 Figure 1 Number of the lengthiest 1% of breast clinic patient appointments (148 total) subdivided by: (A) clinician type(s) involved in each appointment and (B) appointment type. APP, advanced practice provider.

The characteristics of the longest 1% of appointments are presented in Figure 2. Approximately half (54.1%) occurred on the same day as the patient underwent one or more tests (imaging study and/or percutaneous procedure) at the institution. A minority of the longest appointments included the delivery of unexpected news or diagnosis of recurrence. Notably, 40 of the longest appointments were booked for 30 minutes duration (the shortest amount of time). The median number of tests reviewed (including imaging, biopsies, and genetics) in the longest 1% of appointments was 5 (IQR: 1–17), and 75% had 6 or fewer tests reviewed in their clinic note. There were no recorded instances of clinic procedures (i.e., skin biopsy, seroma aspiration) performed during any of these appointments. 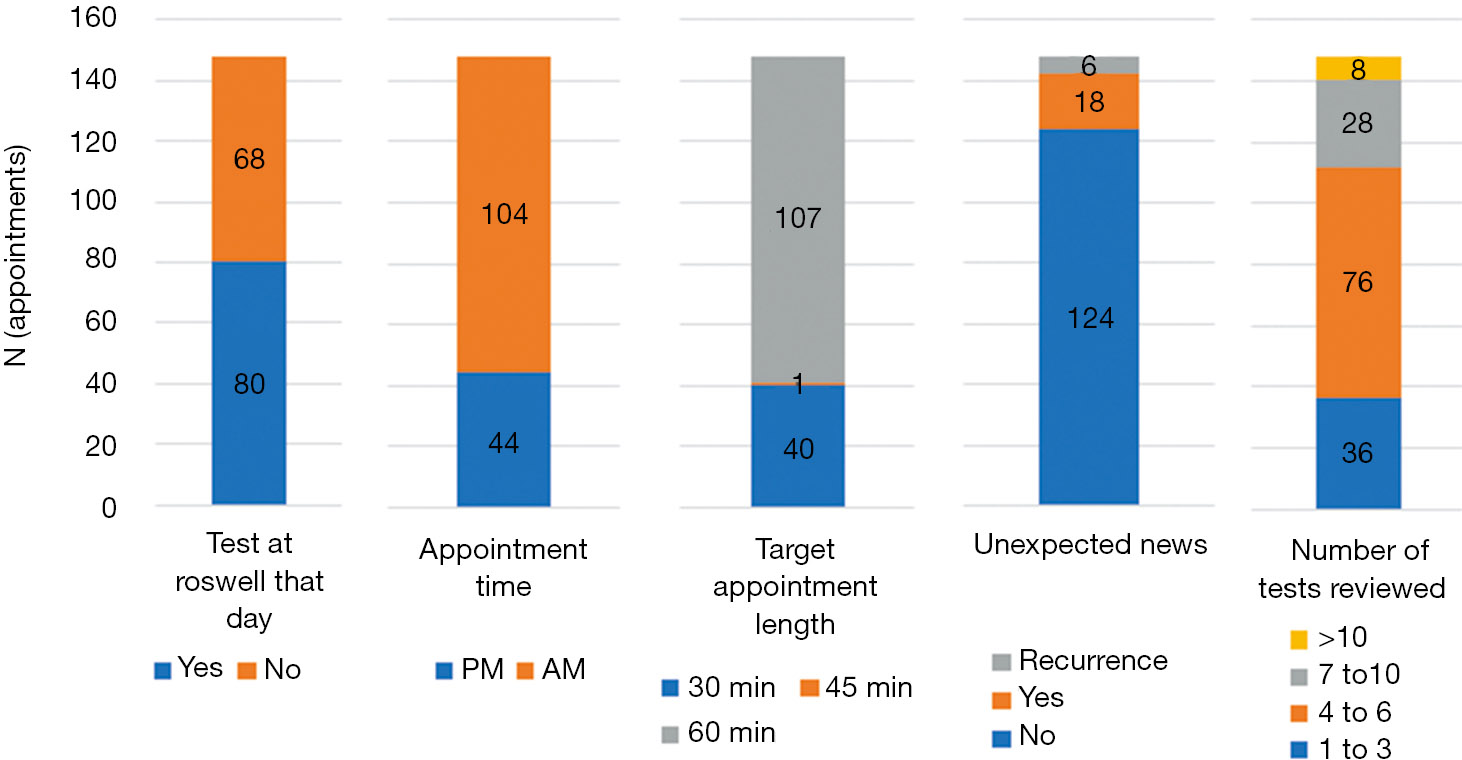 Attending the 148 longest appointments were 145 individual patients, with 3 patients each having 2 appointments, and 142 patients having 1 appointment. The characteristics of the included patient cohort is presented in Figure 3. All patients were female, and the median age was 59.0 years old (IQR: 50–67). A minority of patients were obese (38.9%), current or former smokers (40.7%), diagnosed with a psychiatric comorbidity (33.8%), or had a known or suspected genetic cancer syndrome (22.1%). 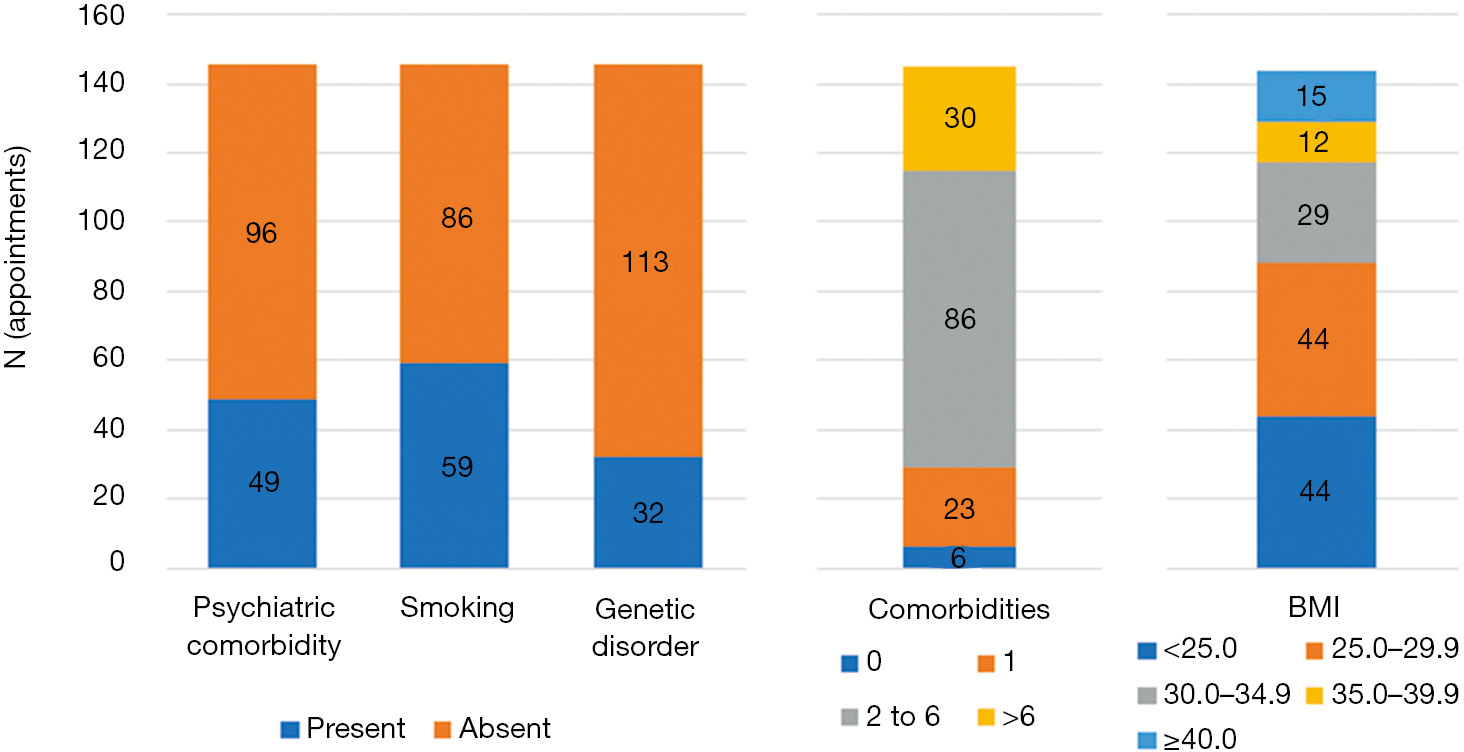 Figure 3 Description of patients (N=145) attending the lengthiest 1% of appointments in terms of patient-level factors/variables. 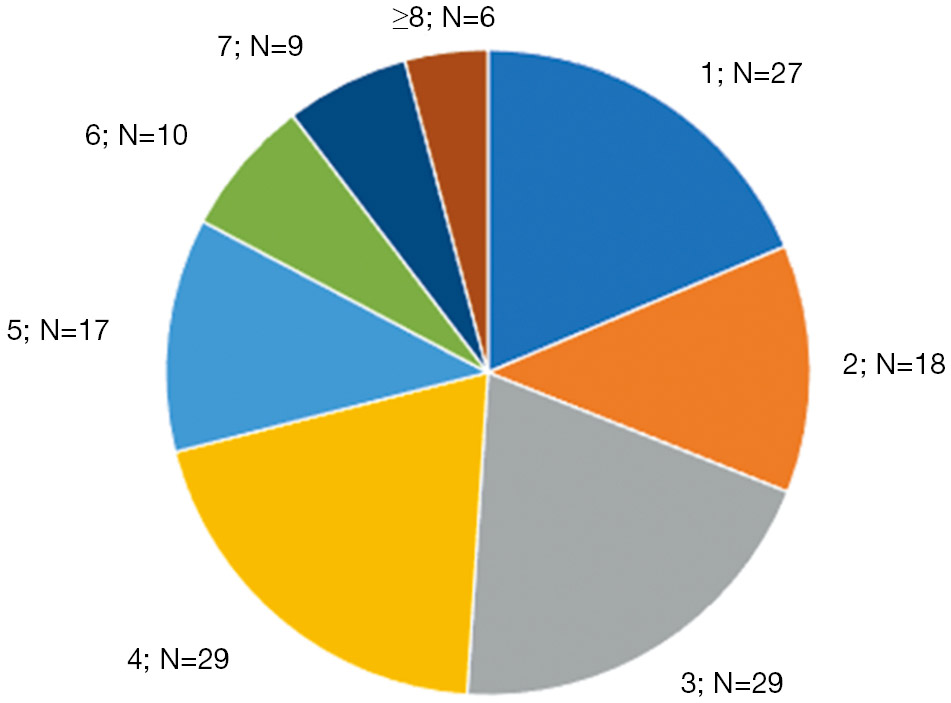 Figure 4 Total number of appointments attended by each patient during the study period who had at least one appointment in the lengthiest 1%. 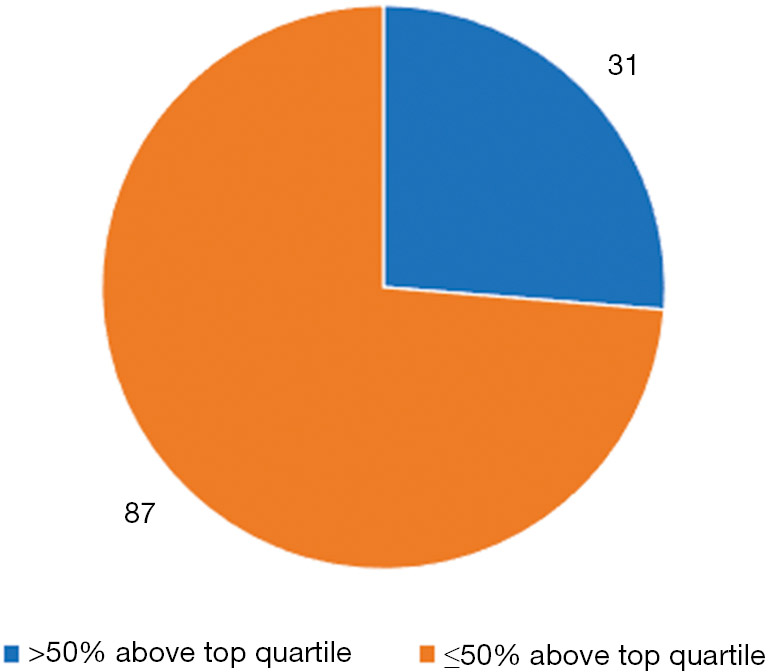 New patient visits comprised the majority of the longest appointments. This association has previously been reported in the literature in other specialties (7). Shorter duration of preoperative and postoperative appointments among cancer patients has also been reported (8). This suggests that the initial assessment and formulation of a management plan contributes more to the longest appointment duration than interpretation and discussion of postoperative results, and communication of unexpected findings on surveillance, including cancer recurrence. This may relate to an emphasis on comprehensive explanation and answering of current and anticipated future questions at the initial appointment. Number of diagnostic tests has also been reported to be independent of visit duration (8).

This study reports that only a minority of patients with the longest appointments were obese, diagnosed with a pre-existing mental illness, current/former smokers, or known/suspected to have a familial cancer syndrome. The proportion of patients with each of these characteristics in the longest appointments cohort was similar to the reported prevalence of smoking history (50%) (9), pre-existing mental illness (25%) (10), obesity (11), and known or suspected familial/genetic cancer syndromes (20%) (12) among all breast cancer patients. Moreover, obese patients have previously been shown not to have statistically significantly longer appointments (13). Similar appointment duration across patient age groups has also been reported (14). This implies that none of these factors predict extremely long appointments. However, given that we did not compare these variables with their frequency in the larger cohort (i.e., the 99% with shorter visit length), these findings should be interpreted with caution.

Patients seen only once during the study period comprised 18.6% of the cohort. The majority of these single appointments presumably represent patients who chose to seek their treatment/follow up elsewhere (i.e., sought a second opinion). This rate is approximately equal to that reported in the general population in an Israeli cohort of patients (15), implying that these patients do not more frequently take an exceedingly long time during their appointment.

The data suggest that of those patients with the longest appointments in breast surgery clinic, only a minority consistently have appointments protracted in duration. For most, the exceedingly lengthy appointment is not the norm. This finding is somewhat surprising, and implies that patient and disease factors may not be the principal determinants of exceedingly long appointments in this population. Therefore, it may be clinic and provider factors that play a more significant role in breast surgery clinic, and this warrants further investigation.

There are several limitations to this study, including the retrospective design and the utilization of a time-stamp tracking system that depends on manual entry of data. However, a study from a different institution found that time stamp patient tracking systems were highly concordant with actual patient flow during a clinic appointment (within 3 minutes for >80% of appointments) (16). Another important limitation is the lack of patient- and appointment-specific data for the larger cohort of patients/appointments (i.e., the 99% with shorter appointment duration). This is a result of the databases interrogated and the information available for analysis, which required a primary chart review to extract this data, and was not feasible for the entire cohort of 14,028 appointments. Accordingly, this section of the results should be interpreted with caution, and the patient- and appointment-related variables reported should be viewed as a descriptive analysis of the lengthiest 1% of appointments, as opposed to concluding an association (or lack thereof) between any of these factors and extreme appointment duration. Lastly, the findings are derived from a cohort of patients seen in a breast surgery clinic at a dedicated cancer center, and caution should be exercised in generalizing them to other populations. The degree to which they are applicable to patients with similar disease processes seen in other institutions or other regions is uncertain. As this study reports on patient interactions with healthcare providers, which are highly influenced by cultural and sociodemographic variables, they may differ substantially in other countries, and further study of this subject using similar methods in other contexts is warranted.

In conclusion, the majority of the lengthiest 1% of appointments in the ambulatory breast surgery clinic studied were for newly diagnosed breast malignancy. Only a minority (26%) of patients had consistently protracted appointments. This has implications for clinic scheduling, in that a patient’s previously extremely lengthy appointment may not predict future long appointments. These results are limited in external validity/generalizability, as sociodemographic, clinicopathologic, healthcare system and cultural factors all contribute to the outcomes investigated, and should be investigated in other contexts before being broadly applied. Further investigation into the association of specific patient, provider, and clinic factors with appointment duration is needed, ideally using a prospective study design or techniques to account for the limitations inherent to retrospective study designs.

The authors would like to acknowledge the assistance of Kevin Davenport and his team in maintaining the patient tracking system database at Roswell Park Comprehensive Cancer Center, and providing the breast clinic data contained therein for this project.

Funding: This work was supported by a National Institute of Health grant (R01CA 160688) to KT.

Reporting Checklist: Both authors have completed the STROBE reporting checklist. Available at http://dx.doi.org/10.21037/gs-20-623

Conflicts of Interest: Both authors have completed the ICMJE uniform disclosure form (available at http://dx.doi.org/10.21037/gs-20-623). The authors have no conflicts of interest to declare.

Ethical Statement: The authors are accountable for all aspects of the work in ensuring that questions related to the accuracy or integrity of any part of the work are appropriately investigated and resolved. The study was conducted in accordance with the Declaration of Helsinki (as revised in 2013). The study was approved by the institutional ethics board of Roswell Park Comprehensive Cancer Center (No. 00001124) and individual consent for this retrospective analysis was waived.