The central neck compartment is bounded superiorly by the hyoid bone, laterally by the carotid arteries, anteriorly by the superficial layer of the deep cervical fascia, and posteriorly by the deep layer of the deep cervical fascia (11), not including the nodes anterior to the strap musculature. The anatomic boundary of the medial border of level III and IV lymph nodes is the lateral border of the sternohyoid muscle (12). The space anterior to the sternohyoid muscle, posterior to the sternocleidomastoid muscle, medial to the lateral border of the sternohyoid muscle, and superior to the clavicle and sternum does not fall under the normal subdivisions of the central and lateral neck compartment (Figure 1). This space is called the suprasternal space, and suprasternal lymph node metastases are occasionally observed on preoperative ultrasonography (US) or computed tomography (CT) in patients with recurrent PTC (Figure 2). 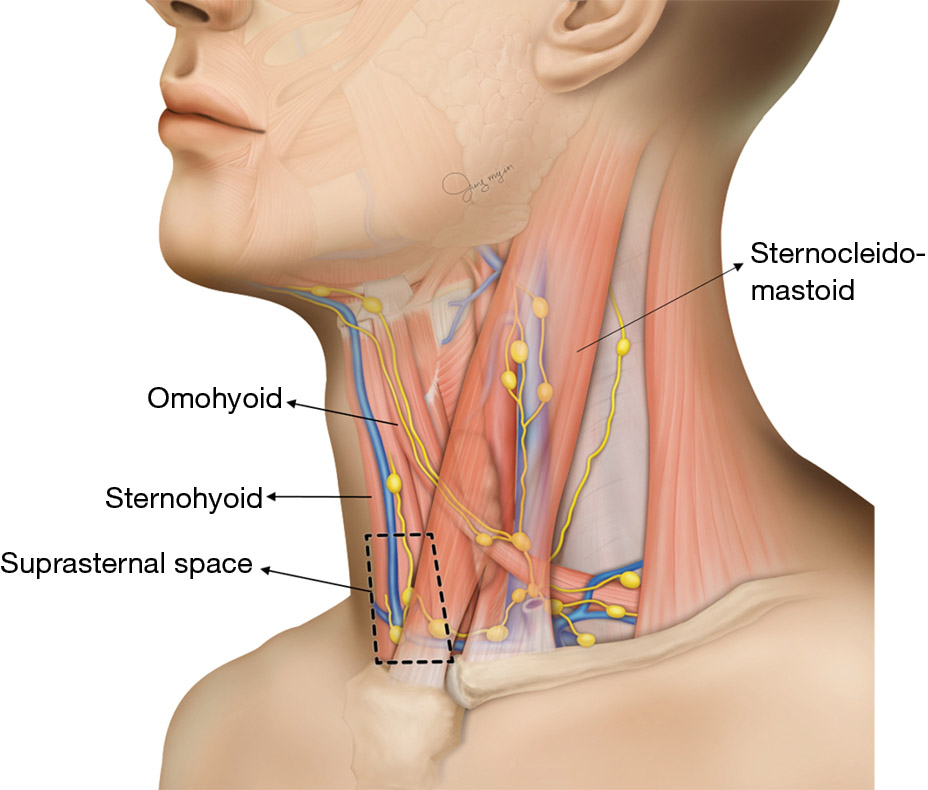 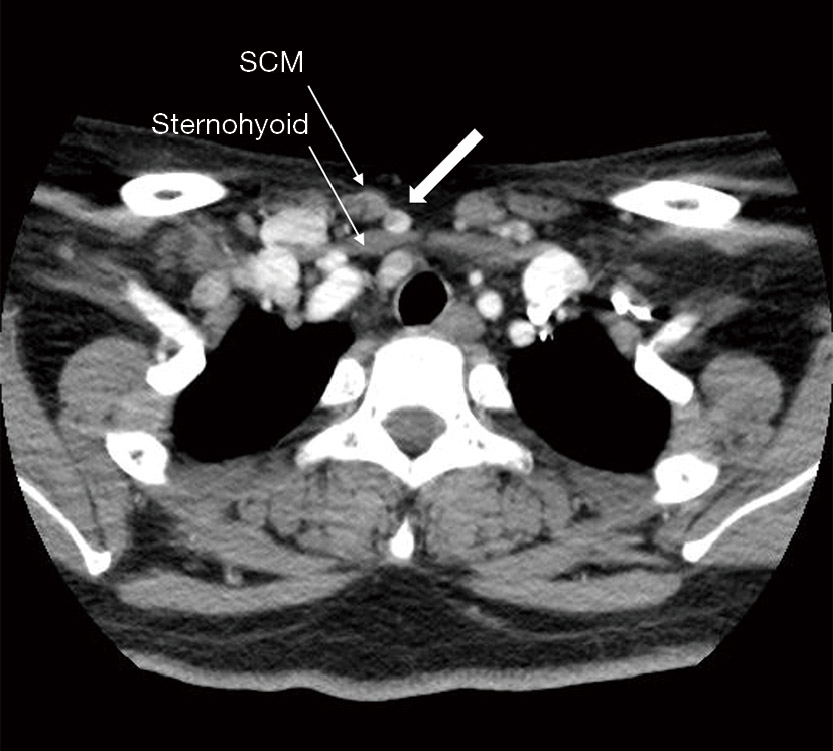 We present the following article in accordance with the STROBE reporting checklist (available at http://dx.doi.org/10.21037/gs-20-368).

Data on a total of 85 patients with cN1b PTC [29 men and 56 women, age: 17–83 (mean, 49.51) years] who underwent total thyroidectomy, central neck dissection, and ipsilateral selective neck dissection including suprasternal lymph node dissection at the Pusan National University Hospital from January 1, 2012 to January 31, 2018 were reviewed. The inclusion criteria were: (I) PTC with lateral cervical lymph node metastasis; (II) no previous treatment with radioactive iodine, radiotherapy, or chemotherapy prior to surgery; and (III) underwent suprasternal lymph node dissection. Patients who had undergone previous thyroidectomy or revision neck dissection were excluded. The study was conducted in accordance with the Declaration of Helsinki (as revised in 2013). This study was approved by the Institutional Review Board (IRB No. H-2002-003-087) and individual consent for this retrospective analysis was waived. 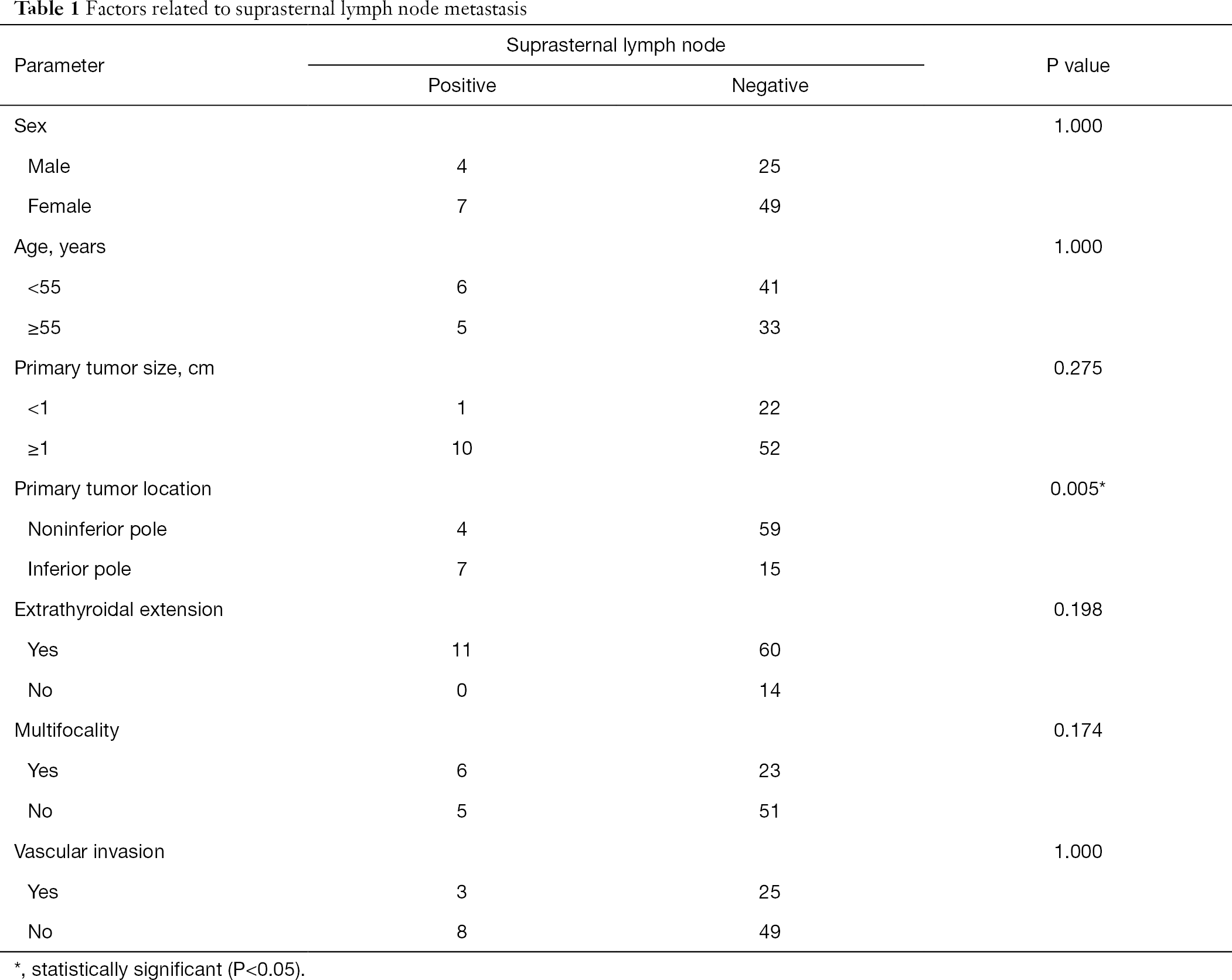 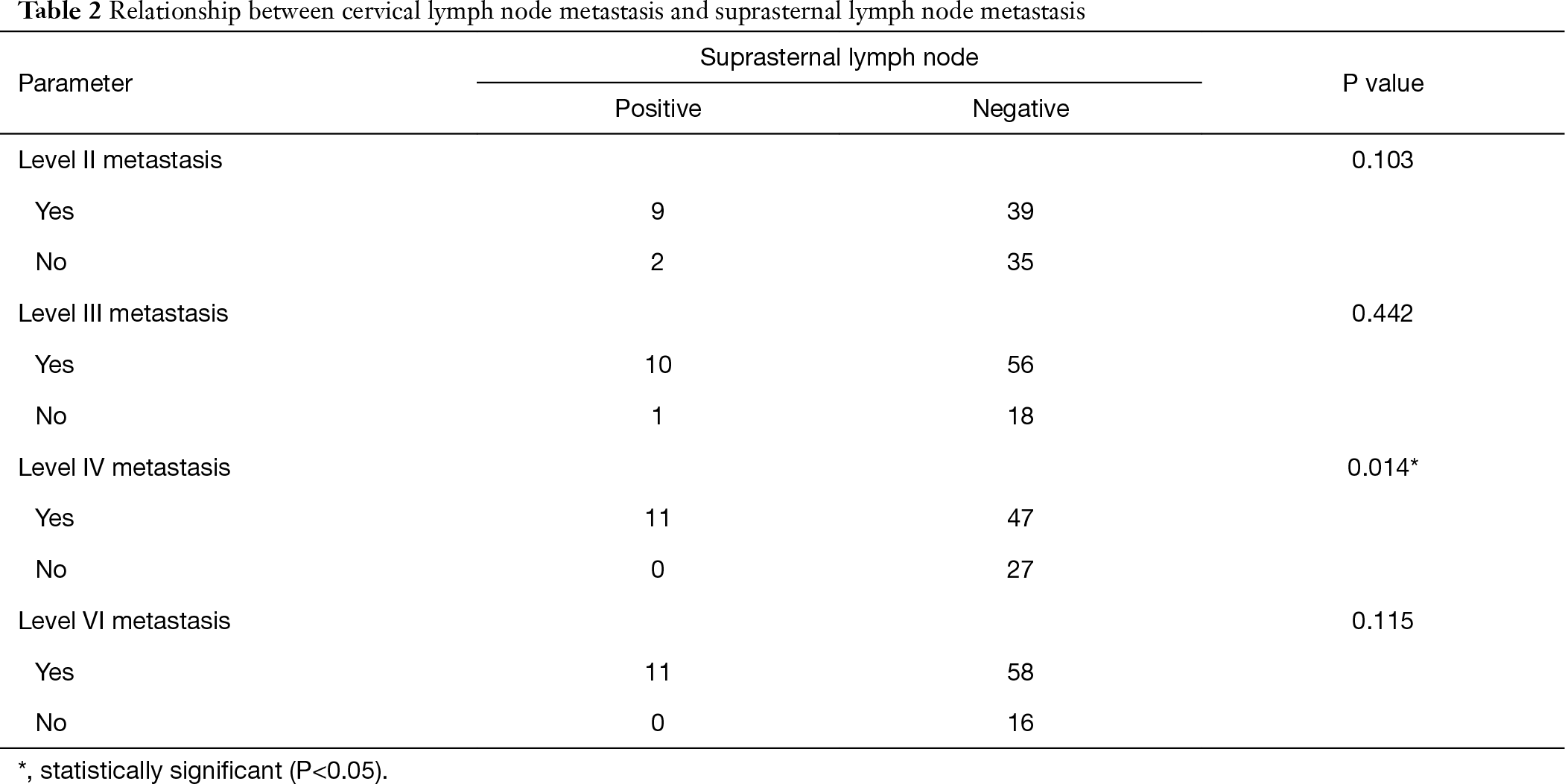 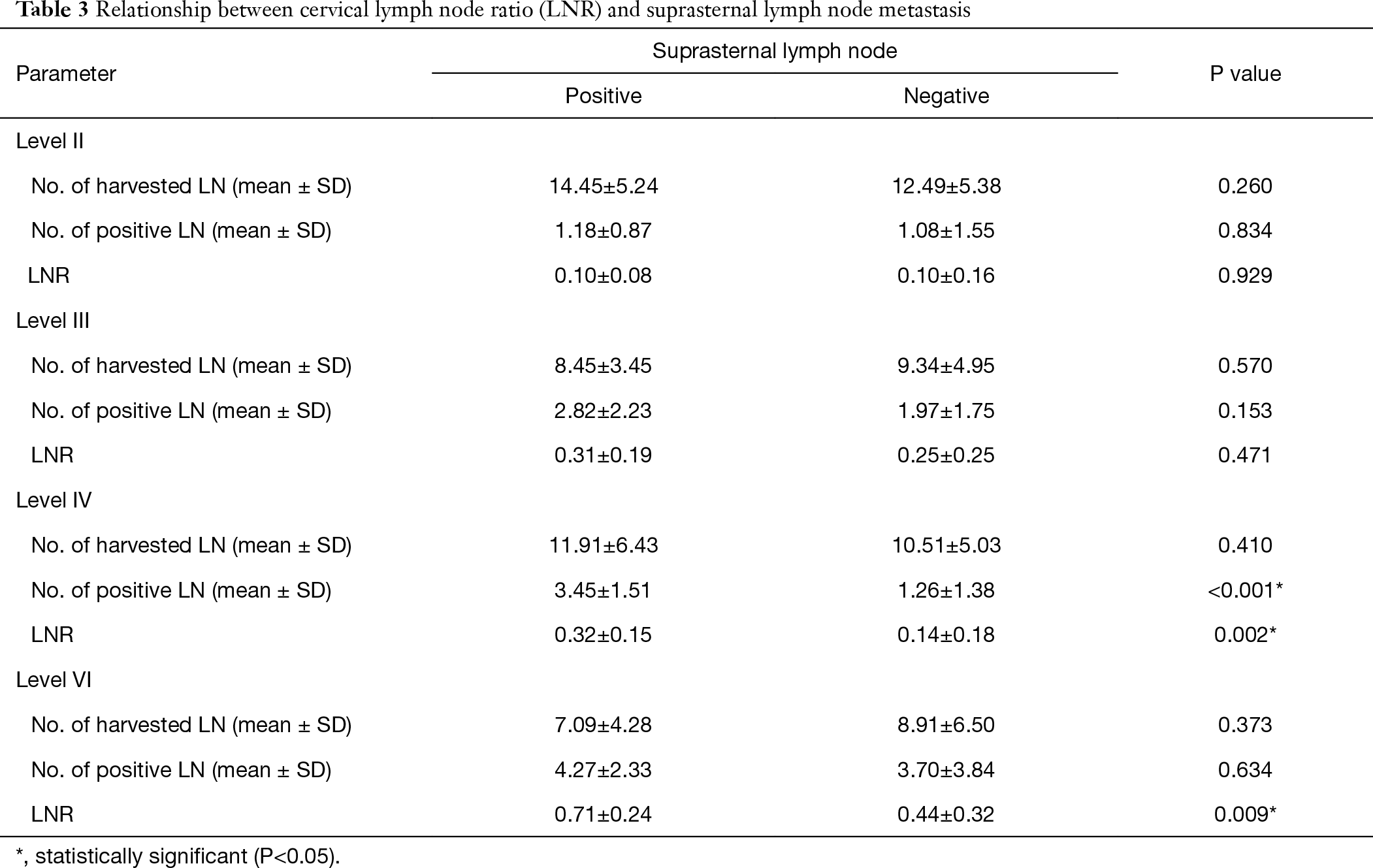 In all patients, suprasternal lymph node dissection took approximately 5 minutes, and there were no specific intraoperative or postoperative complications such as bleeding or pain. 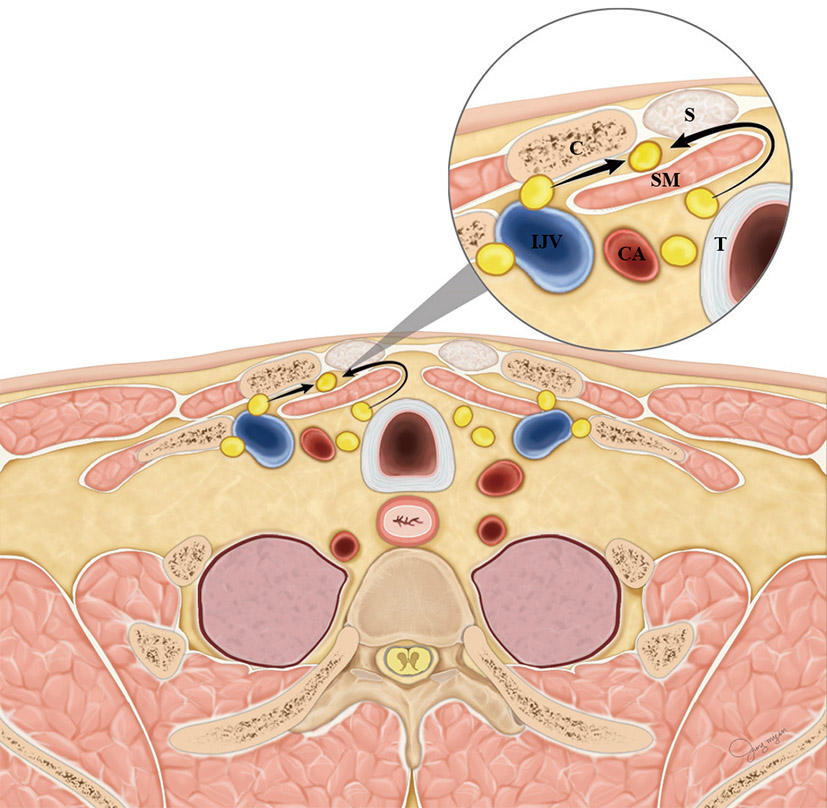 The main limitation of this study is that it involved a small number of patients from a single-institution; hence, the findings may have been underestimated or overestimated. In addition, this study may have some inevitable bias owing to its retrospective nature. Therefore, a prospective study with a larger cohort is needed to further examine the clinical significance of suprasternal lymph node dissection in patients with PTC.

In patients with cN1b PTC, especially those with tumors in the inferior pole of the thyroid gland or level IV lymph node metastasis, suprasternal lymph node dissection should be routinely included as part of selective neck dissection.

We would like to thank Editage (www.editage.co.kr) for English language editing.

Funding: This work was funded by the National Research Foundation of Korea (NRF) grant funded by the Korean government (MSIT) (NRF- 2017R1E1A1A01074316).

Reporting Checklist: The authors have completed the STROBE reporting checklist. Available at http://dx.doi.org/10.21037/gs-20-368

Conflicts of Interest: All authors have completed the ICMJE uniform disclosure form (available at http://dx.doi.org/10.21037/gs-20-368). The authors have no conflicts of interest to declare.

Ethical Statement: The authors are accountable for all aspects of the work in ensuring that questions related to the accuracy or integrity of any part of the work are appropriately investigated and resolved. The study was conducted in accordance with the Declaration of Helsinki (as revised in 2013). The Institutional Review Board of Pusan National University Hospital approved this study (No. H-2002-003-087) and waived the requirement for informed consent.