The incidence of endometrial cancer has been increasing in recent years, with a 5-year survival rate of approximately 81% in the United States (1). In China, the 5-year survival rate for endometrial cancer can also exceed 80%. High-risk histologic endometrioid carcinomas account for 15–20% of cases, and include poorly differentiated endometrioid carcinomas (PDEC) (2), uterine papillary serous carcinomas (UPCS), uterine clear cell carcinoma (UCCC), and uterine carcinosarcoma (UCS) (3). These high-risk histologic tumors account for more than 50% of endometrioid carcinoma deaths (2,4-6). They have high malignancy rates and poor prognoses, and are liable to distant metastasis, yet are difficult to detect early (7,8). Unsurprisingly, improvement of the survival rate of the patients has become a controversial topic. Although most studies have reported no differences between open and minimally invasive surgery for endometrial cancer in terms of their complications and long-term survival (9), only few studies have reported on the impact of surgical approach selection on the long-term survival of high-risk endometrial cancer patients. The present study primarily addresses the relationship between surgical approach selection and long-term survival in high-risk endometrial carcinomas with the expectation of providing certain strategies for clinical treatment. In addition, the univariate analysis in this article found that the patient's survival time is related to staging, adjuvant treatment and surgical methods. Multivariate analysis showed that surgical methods, staging, pathology and adjuvant therapy were independent prognostic factors. These are novel and original, and have great guiding significance for future clinical work. We present the following article in accordance with the STROBE reporting checklist (available at http://dx.doi.org/10.21037/gs-20-887).

Fifty-seven patients with UCS or UPCS, 53 with UCCC, and 110 with PDEC who underwent primary surgery at the Affiliated Shaanxi Provincial Tumor Hospital of the Medical College of Xi’an Jiaotong University between February 2010 and December 2015 were retrospectively reviewed. All procedures performed in this study involving human participants were in accordance with the Declaration of Helsinki (as revised in 2013). The study protocol was approved by the institutional review board at Xi’an Jiaotong University. Individual consent for this retrospective analysis was waived.

All patients underwent surgery to determine the pathological stage, including debulking surgery. The patients underwent hysterectomy and bilateral adnexectomy, and no neoadjuvant chemotherapy was administered (except for stage IV patients). Patients were excluded based on the following criteria: (I) those who had received preoperative radiation therapy without the presence of other cancers, except for patients undergoing laparoscopic surgery or laparotomy; (II) those with highly differentiated endometrioid adenocarcinoma but death due to other diseases; and (III) those with incomplete removal of the uterus. All patients were followed up after treatment. Surgical pathological staging was based on FIGO 2009. The patients were divided into two groups, with one group undergoing open abdominal surgery and the other receiving minimally invasive surgery, including laparoscopic surgery and vaginal combined laparoscopic surgery. Follow-up was performed every 3 months for the first 2 years, every 6 months at the beginning of the third year, and every year after 5 years. For other cancers, all diagnoses were made by our gynecologic pathologists.

Statistical analyses were performed using SPSS Statistics version 20.0 (IBM Co., Armonk, NY, USA). The chi-square test was applied to compare the ratios between the groups. The survival graph was analyzed via the Kaplan-Meier method. Kaplan-Meier survival curves were generated, and the survival differences were quantified using the log-rank test (univariate analysis). Multivariate analysis was employed to analyze the independent prognostic factors using the Cox regression model. Forest plots were used for subgroup analyses to compare the prognostic differences between these malignant endometrial carcinomas (EC). A P value of <0.05 was considered statistically significant.

Table 1 The demographic, surgical, and histopathological features of all patients in the study cohort
Full table

The effect of clinical characteristics on survival time was analyzed using a single factor. The median survival time was 67.08 months for patients under the age of 60 years, and 67.71 months for those over 60 years, and the difference was not statistically significant (P=0.260). The 5-year survival rate was 69% and 74% for those under the age of 60 years and those over 60 years, respectively (Figure 1). 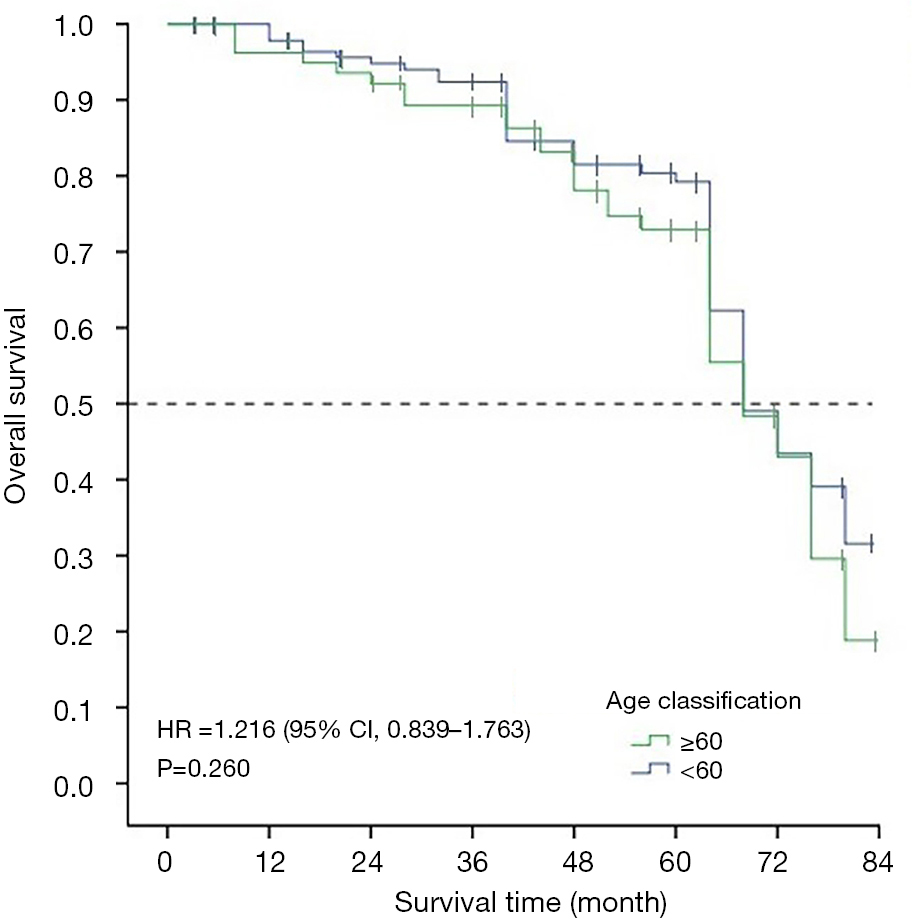 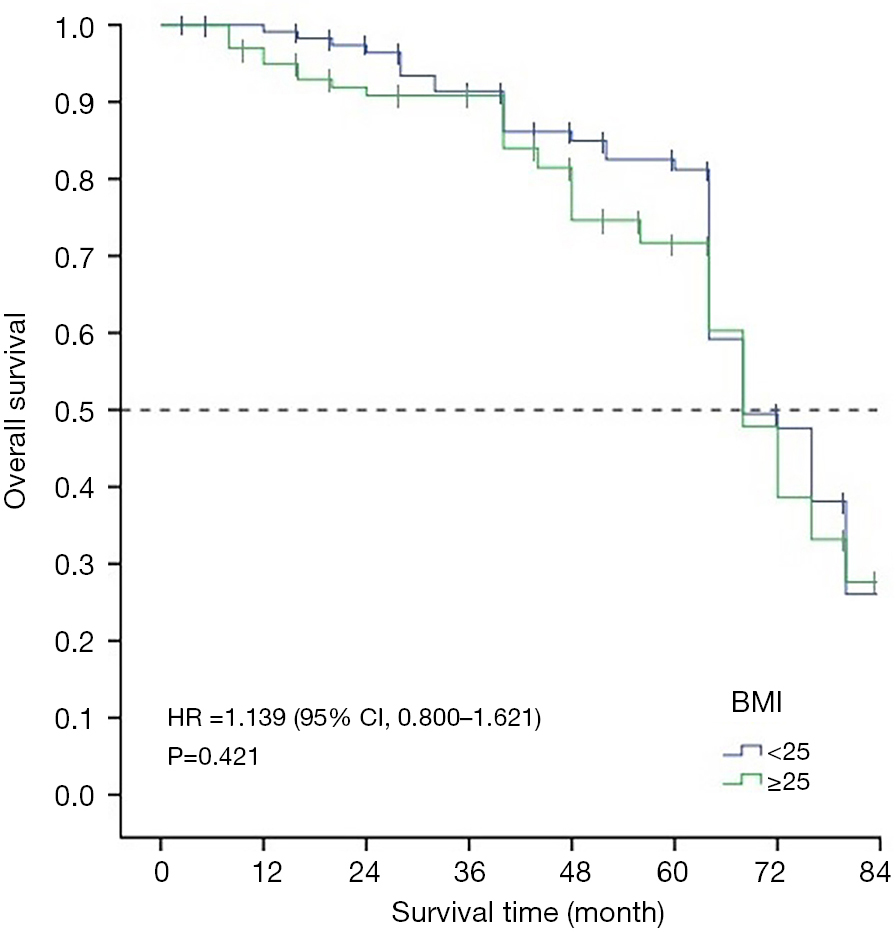 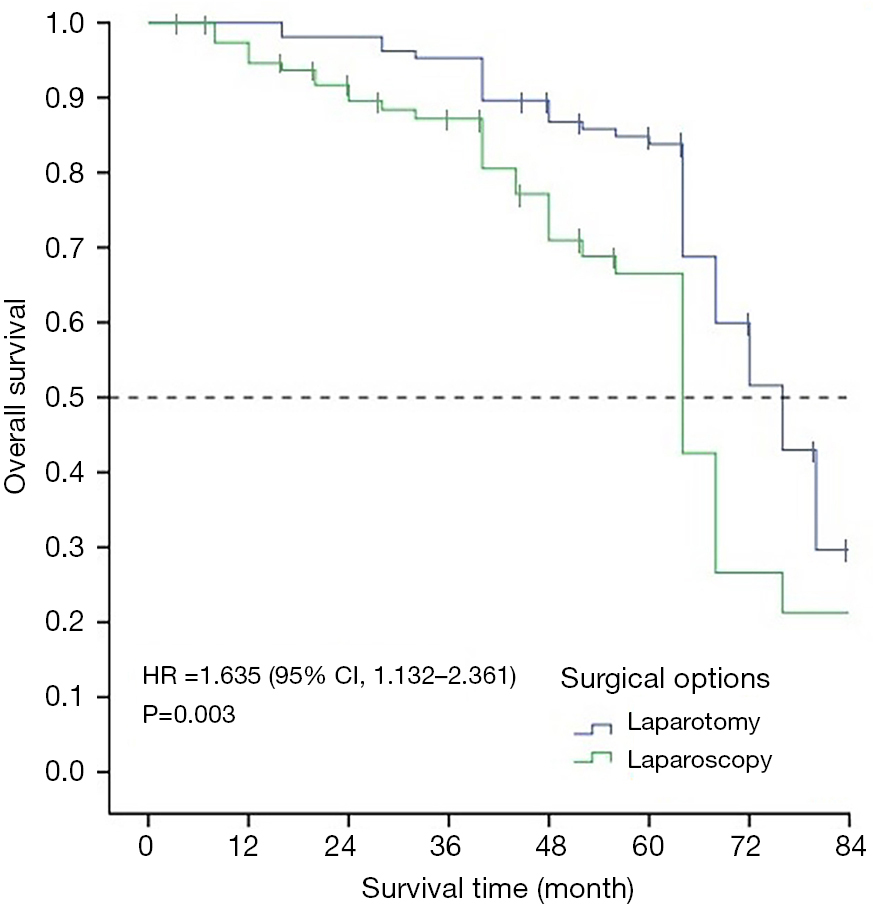 The 5-year survival rate and median survival time of 58 patients with poorly differentiated adenocarcinoma undergoing laparotomy were 85% and 75.56 months, respectively, and for patients with poorly differentiated adenocarcinoma undergoing laparoscopic surgery were 75% and 67.61 months, respectively. There was no statistical difference between the two groups (χ2=0.702, P=0.402). 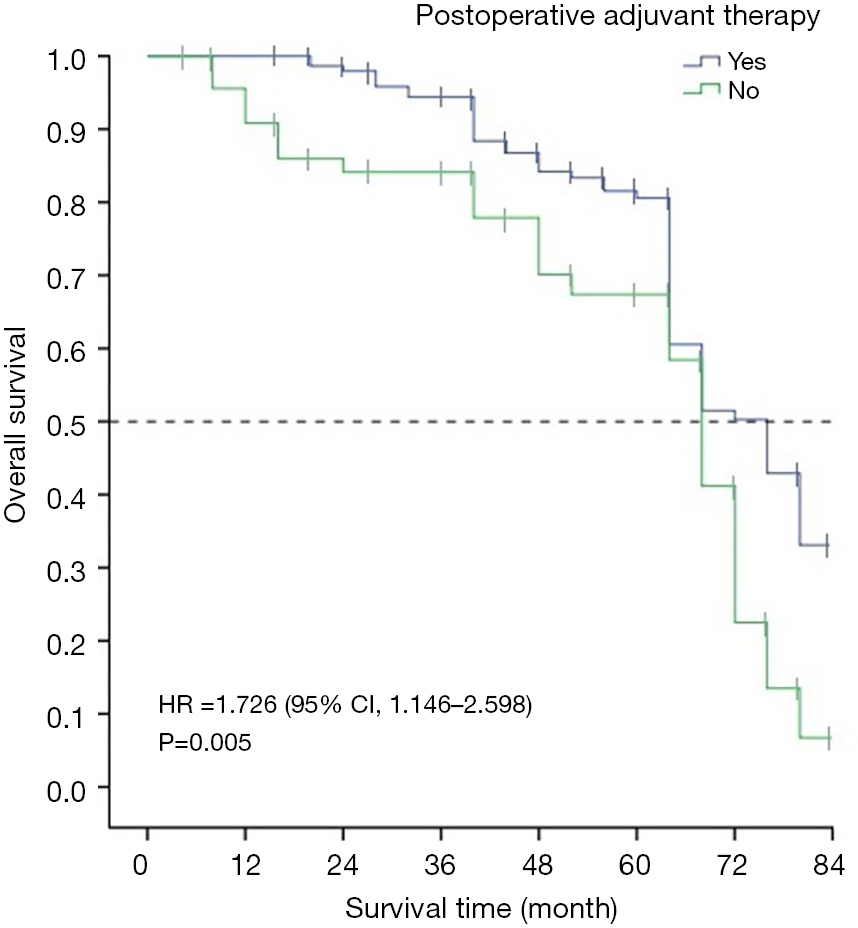 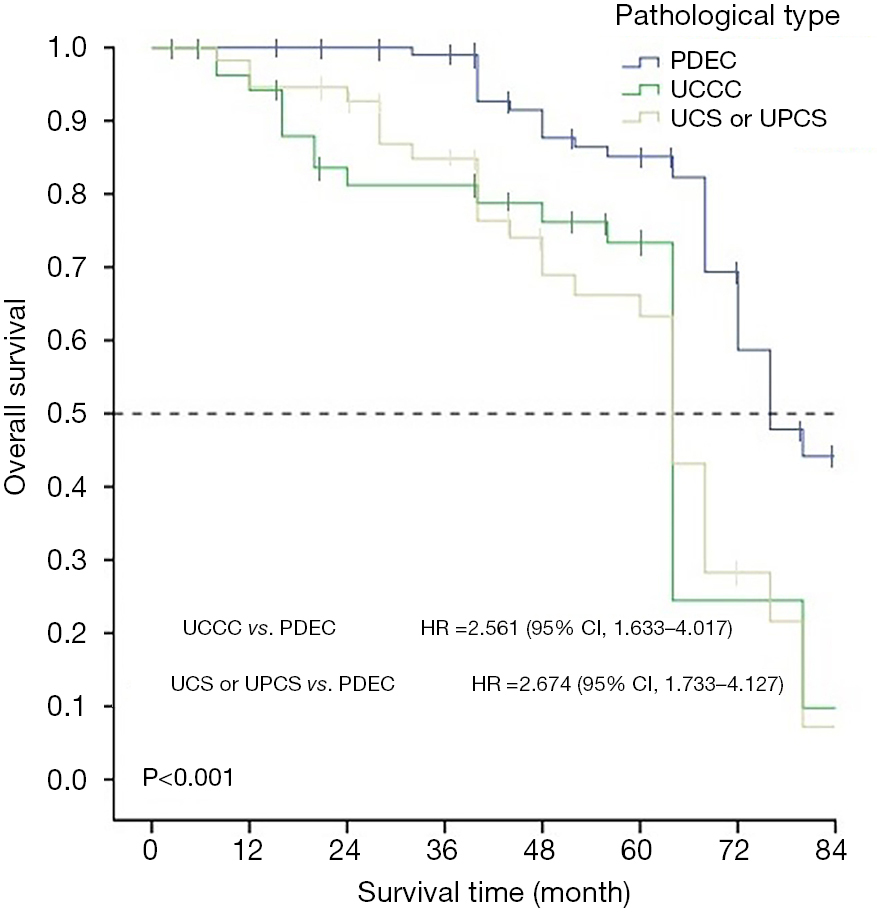 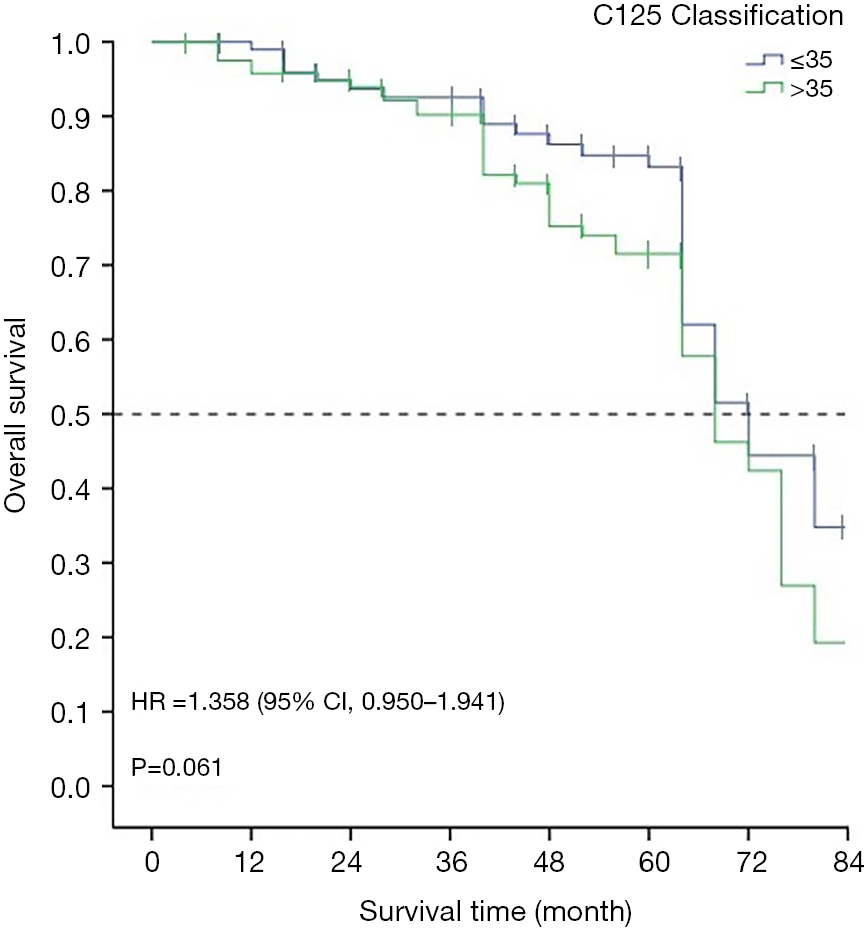 Figure 6 Overall survival of patients with normal CA125 and those with abnormal CA125 values. 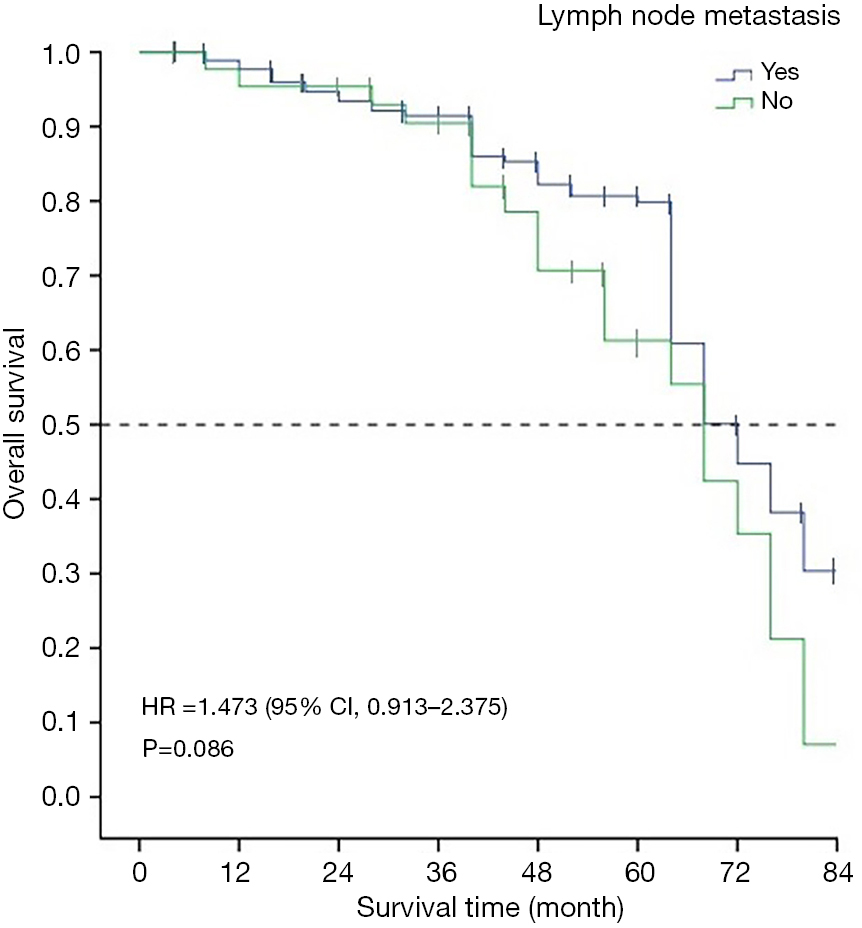 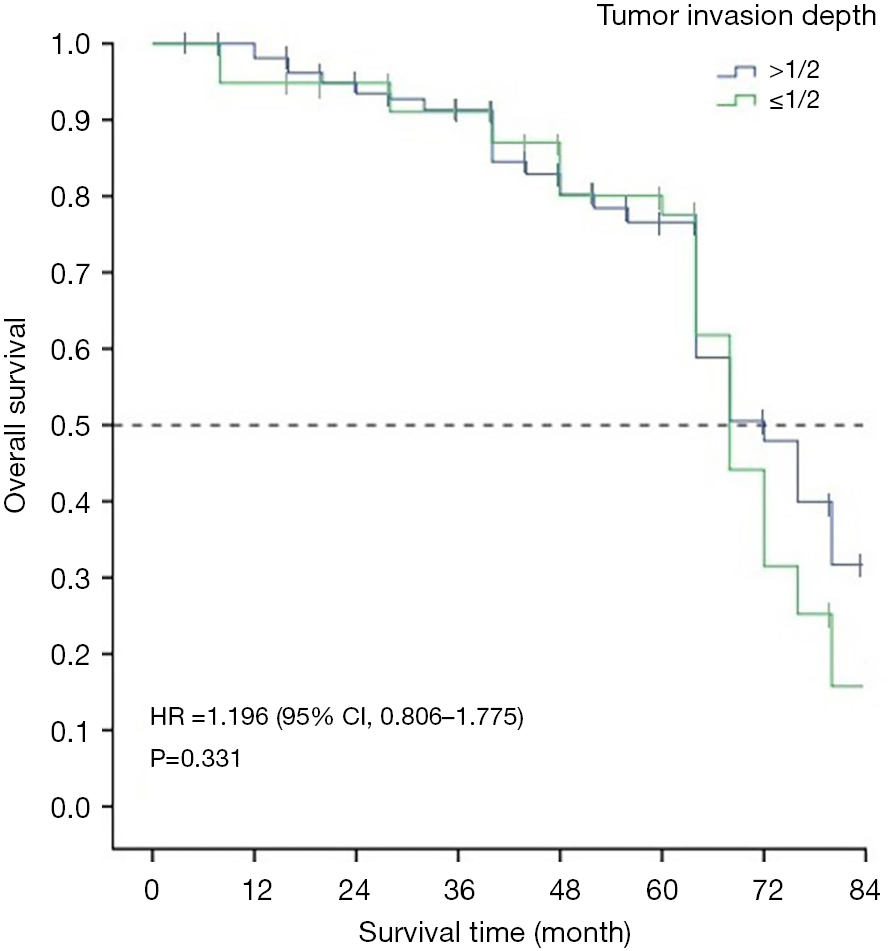 Variables that exhibited statistical significance in the univariate analysis were incorporated into the Cox regression equation for analysis. It was concluded that postoperative adjuvant therapy, pathological stage, pathological type, and surgical mode were all independent risk factors affecting the survival time of patients. See Table 2.

We observed more advanced endometrial carcinosarcoma patients, but fewer of them were obese. There are also more advanced patients with UCS (12), UCCC, and UPSC. In this study, we showed that staging is an independent prognostic factor for high-risk endometrial carcinoma tissue types. This is attributable to two main factors. Firstly, preoperative and postoperative stages are inconsistent due to preoperative limitation in the uterus, postoperative limitations beyond the uterus, and distant metastasis, particularly in UCS (12), UCCC, and UPSC (10). Secondly, the symptoms and clinical manifestations are not specific (6), and imaging studies did not detect micrometastases. Therefore, there are more patients with these three types of advanced endometrial cancer, with significantly reduced survival rates and poor prognoses (12).

It is well known that the initial treatment of tumor patients is critical. Although minimally invasive surgery for endometrial cancer offers shorter operation times, less blood loss, and shorter hospitalization times than open surgery, open surgery does not affect the later adjuvant treatment of patients. There was no significant difference in mean length of hospital stay (13). In this study, we focused on overall survival time and survival improvement. The operation methods and approaches were different, which meant that patients had different outcomes. Our study found that the survival rate of open surgery was higher than that of minimally invasive surgery among women with UCS, UCCC, and UPSC. In these patients, median and overall survival times were prolonged.

Surgical approach was also an independent risk factor in the multivariate analysis. UPS and UCCC spread to the abdominal peritoneum more frequently than PDEC, which was also confirmed by Greggi et al. (10). This may be related to the use of hysteroscopy at preoperative diagnosis, which may lead to metastasis through the fallopian tube and into the abdominal cavity. However, the specific reasons need to be further explored, and stratified analysis and additional research may be required. Clearly, the choice of surgical approach for high-risk endometrial cancer tissue types is controversial. Personally, I think it is good to use fluorescence guidance during surgery for high-risk endometrial cancer.

In poorly differentiated endometrial carcinoma (PDEC) patients, we found that there was no difference in the progression-free and overall survival between open and laparoscopic surgeries, which is consistent with the findings of some gynecologists (14). However, in UCS, UCCC, and UPSC patients, we observed a difference between laparoscopic surgery and open surgery. We also found that overall survival and disease-free survival was higher in open surgery compared to minimally invasive surgery, which is inconsistent with the results of previous studies. At present, only patients with early-stage endometrial cancer can be followed up due to the limitation of surgical mode. Previous studies have shown that minimally invasive surgery is likely to be regarded as the standard surgical method for endometrial carcinoma (9,15-17). Previous research have also reported the different surgical approaches in EC (13,18,19). Koskas et al. (20) reported that there was no notable difference in overall survival between minimally invasive surgery and open surgery, however this study included a higher proportion of early-stage patients. A previous study showed that women with type II endometrial cancer that underwent minimally invasive hysterectomies experienced fewer complications and similar survival outcomes compared with those who underwent open surgery. There was also no difference in the overall survival between FIGO stage I and stage II cancer patients (21). Some authors have reported no significant difference in disease-free survival and overall survival at 21 months (median) follow-up time between laparotomy and laparoscopic or robotic surgery (22), however these results need to be confirmed.

The current study provides surgical methods for UCS, UCCC, and UPSC, which have been insufficiently investigated. We recommend that UCS, UCCC, and UPSC patients be mindful when choosing a surgical approach; we suggest opting for open surgery, despite shorter hospital stays, faster recovery, and fewer complications with minimally invasive surgery. This is because both the 5-year and overall survival time for open surgery is better than that of minimally invasive surgery. Furthermore, UPSC and UCCC, which may coexist with UPSC, have a propensity to spread beyond the uterus and a clinical behavior similar to ovarian cancer with relapse and metastases in the upper abdomen, retina, and peritoneum (10,23,24). Also, micrometastases are sometimes missed in minimally invasive surgery, resulting in extensive metastasis caused by residual lesions. Moreover, the operation cannot reach complete staging, and radiographic examination cannot fully assess preoperative staging. Secondly, intraoperative uterine tumor overflow may result in tumor implantation, or the uterus was not removed integrally from the vagina, thus considering long-term survival, we cannot select minimally invasive surgery for all patients with UCS, UCCC, and UPSC. Monterossi et al. (21) reported that the overall survival of patients with advanced FIGO stage III type II endometrial cancer treated with open surgery is better than those treated with minimally invasive surgery, although the differences were not statistically significant (P=0.063). Maybe, this is because the patient’s disease is more severe and has a tendency to spread outside the uterus. The clinical manifestations are similar to ovarian cancer, which can recur and metastasize in the upper abdomen, retina and peritoneum. In addition, minimally invasive surgery sometimes misses micrometastasis, resulting in residual lesions causing widespread metastasis. Surgery cannot reach the complete staging, and imaging examination cannot fully evaluate the preoperative staging. Secondly, intraoperative uterine tumor overflow may lead to tumor implantation, or the uterus is not completely separated from the vagina, which affects long-term survival.

Finally, it is worth noting that our study found that postoperative adjuvant therapy was associated with better overall survival and the difference was also statistically significant, which is consistent with most previous studies (25,26).

In conclusion, our study confirmed that high-risk endometrial cancer tissue types are associated with a poor prognosis. Also, UCS, UCCC, and UPSC are more likely to metastasize than PDEC. Although our study confirmed that open surgery has a higher survival rate than minimally invasive surgery in UCS, UCCC, and UPSC, this finding remains controversial due to the small sample size. Multicenter prospective studies are needed to further validate these results. At present, we recommend open surgery for high-risk endometrial cancer tissue types, especially considering that not all patients with endometrial cancer are suitable for minimally invasive surgery.

Reporting Checklist: The authors have completed the STROBE reporting checklist. Available at http://dx.doi.org/10.21037/gs-20-887

Conflicts of Interest: All authors have completed the ICMJE uniform disclosure form (available at http://dx.doi.org/10.21037/gs-20-887). The authors have no conflicts of interest to declare.

Ethical Statement: The authors are accountable for all aspects of the work in ensuring that questions related to the accuracy or integrity of any part of the work are appropriately investigated and resolved. All procedures performed in this study involving human participants were in accordance with the Declaration of Helsinki (as revised in 2013). The study protocol was approved by the institutional review board at Xi’an Jiaotong University. Individual consent for this retrospective analysis was waived.