Thyroid disease is associated with an increased risk of breast cancer: a systematic review and meta-analysis

Breast cancer (BC) is the most common type of cancer in females, occurring in 20% of the female population world-wide, and is the main cause of tumor-related death in women (1). Studies have shown that BC is closely related to the endocrine system (2). The thyroid is an important part of the endocrine system and secretes thyroid hormone (TH), which plays a vital role in the growth, development, and metabolism of cells and tissues (3,4). As pituitary hormones target both breast and thyroid tissues (5), there may be a correlation between BC and thyroid disorders. Hardefeldt et al. (6) found that there was significant evidence of an increased risk of BC in patients with presence of anti-thyroid antibodies, while they also found that there was no significant evidence of an increased risk of BC in patients with hypothyroidism and hyperthyroidism. But more high-quality prospective studies are needed to prove causality the relationship between benign thyroid disease and BC. However, the relationship between BC and thyroid diseases, such as hyperthyroidism, hypothyroidism, autoimmune thyroid disease (AITD) and thyroid cancer, is still not well understood.

Angelousi and colleagues demonstrated that TH promoted the proliferation of breast cancer cells in vitro, while hypothyroid function resulted in a lower incidence of lymph node metastases (7). Recent studies have suggested that TH may play a positive role in the cause and development of BC at a cellular level (8-11). However, Hercbergs et al. found no evidence that TH causes BC in the clinical setting (12). Despite numerous studies having investigated the association between thyroid dysfunction and BC, the exact relationship and molecular mechanisms involved remain unclear. Further studies examining the prognostic role of TH in BC are thus warranted.

AITD is a disease whereby the body's own immune cells attack and damage the thyroid tissue. It is characterized by the presence of autoantigens such as thyroglobulin (Tg) and thyroid peroxidase (TPO). In patients with AITD, autoantibodies to the thyroid antigens can be detected in the blood. These autoantibodies include thyroglobulin antibody (TGAb), thyroid microsomal antibody (TPOAb), and thyroid-stimulating receptor antibody (TRAb). Furthermore, the immune system plays a complex role in BC and autoimmune factors are also crucial in the development of BC, so TGAb and TPOAb may have some correlation with BC. Several studies have shown an increased prevalence of AITD in patients with BC (13-15), while others have found no association (16). In fact, Tosovic and colleagues demonstrated that women with high levels of TPOAb had a relatively lower risk of BC (17).

This is the largest-scale meta-analysis, including 21 studies involving 67,049 female breast cancer patients to explore the correlation between thyroid diseases (benign and malignant) and the risk of breast cancer. Base on the data from cohort studies and case-control studies, this meta-analysis examined the relationship between thyroid diseases and the risk of BC, aiming of obtaining a comprehensive and comprehensive result. Understanding this relationship can aid in the early prevention, detection and treatment of patients with BC.

We present the following article in accordance with the PRISMA reporting checklist (available at http://dx.doi.org/10.21037/gs-20-878).

The databases PubMed, EMbase, Web of Science, and the Cochrane Library were searched systematically. The search period was from the establishment of the databases to August 2020. All searches were performed using the combination of medical subject heading terms (MeSH), text words, and keywords. The search terms “breast neoplasms”, “breast cancer”, “breast cancer tumor”, “breast carcinoma”, “thyroid disease’’, “thyroid cancer”, “hyperthyroidism”, “hypothyroidism”, “autoimmune thyroiditis”, “TGAb”, and “TPOAb”. There was English language restriction on the search, and unpublished literature was not included. Based on the references listed in the literature obtained in the initial search, a secondary search was performed and literature retrieval was expanded by manual retrieval.

Studies where the patients had a definite diagnosis of BC, hyperthyroidism, hypothyroidism, AITD, or thyroid cancer were included in this meta-analysis. Studies that reported a 95% confidence interval (CI) and odd ratio (OR), or where the 95% CI and OR could be calculated from the data presented, were included. Non-English publications, duplicate publications, reviews, editorials, single case reports, studies without full text, and studies with incomplete information, or where the data could not be extracted, were all excluded. Studies of drug-induced thyroid disease, and literature including patients with irrelevant acute or chronic diseases were excluded. Any study that did not meet the inclusion criteria was also excluded.

The literature search, screening, and information extraction were performed independently by two professionally trained researchers. Any discrepancies were resolved by discussion, and the final decisions were made by the corresponding author. The data was collated according to a standardized form, and included the country, author, year of publication, research type, number of cases, and clinical outcomes.

Two researchers independently adopted the Newcastle-Ottawa Scale (NOS) to evaluate the quality of the literature (23). Any differences in opinions were resolved through discussion or consultation with a third party. NOS evaluates the quality of a study by assessing four items in the “Research Subject Selection” domain (4 points), one item in the “Comparability between Groups” domain (2 points), and three items in the “Result Measurement” domain (3 points). Each study can have a maximum of 9 possible points. Studies with 7 points or more are regarded as high-quality literature, and studies scoring less than 7 points are considered lower-quality literature.

Odds ratio (OR) with 95% CI was used to evaluate whether each thyroid disease was an independent risk factor. The fixed effects model was used for analysis if the heterogeneity tests showed that P≥0.1 and I ≤50%. The random effects model was used for combined analysis if the heterogeneity tests showed P<0.1 and I2>50%. Sensitivity analyses and meta-regression analyses were used to examine the sources of heterogeneity when required. Symmetry on the funnel plot was used to determine publication bias. All data were analyzed using Stata software (version 15.1).

A total of 1,642 articles were obtained by searching through PubMed, EMbase, Web of Science, and the Cochrane library. After excluding duplicate articles, there were 1,420 articles remaining. The abstracts of these publications were reviewed and 1,224 articles were selected. Reading the full text of the articles resulted in the selection of 21 publications suitable for this meta-analysis (Figure 1). 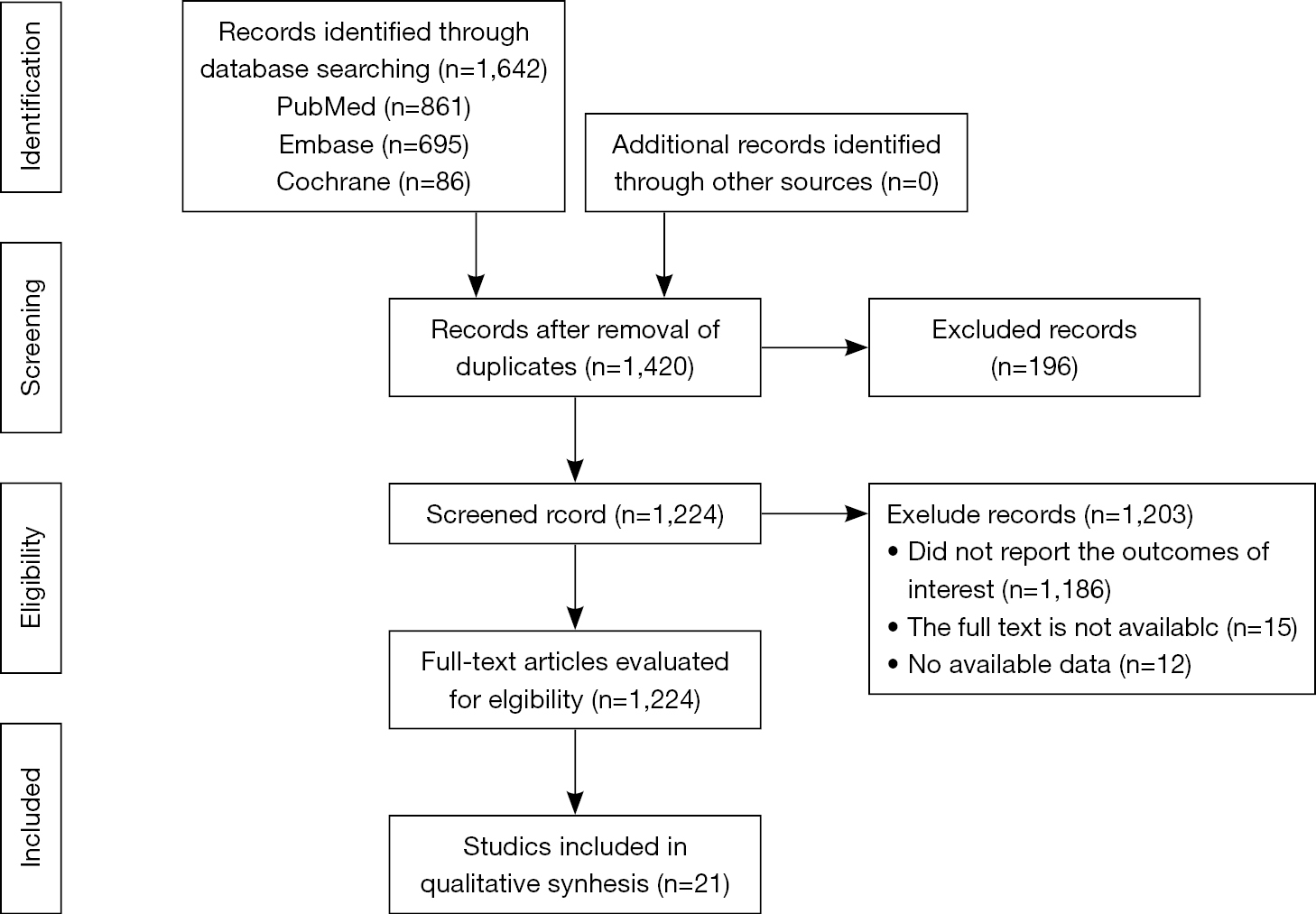 Baseline characteristics and quality assessment of the included studies

The baseline characteristics and quality assessment of the included studies are shown in Table 1. 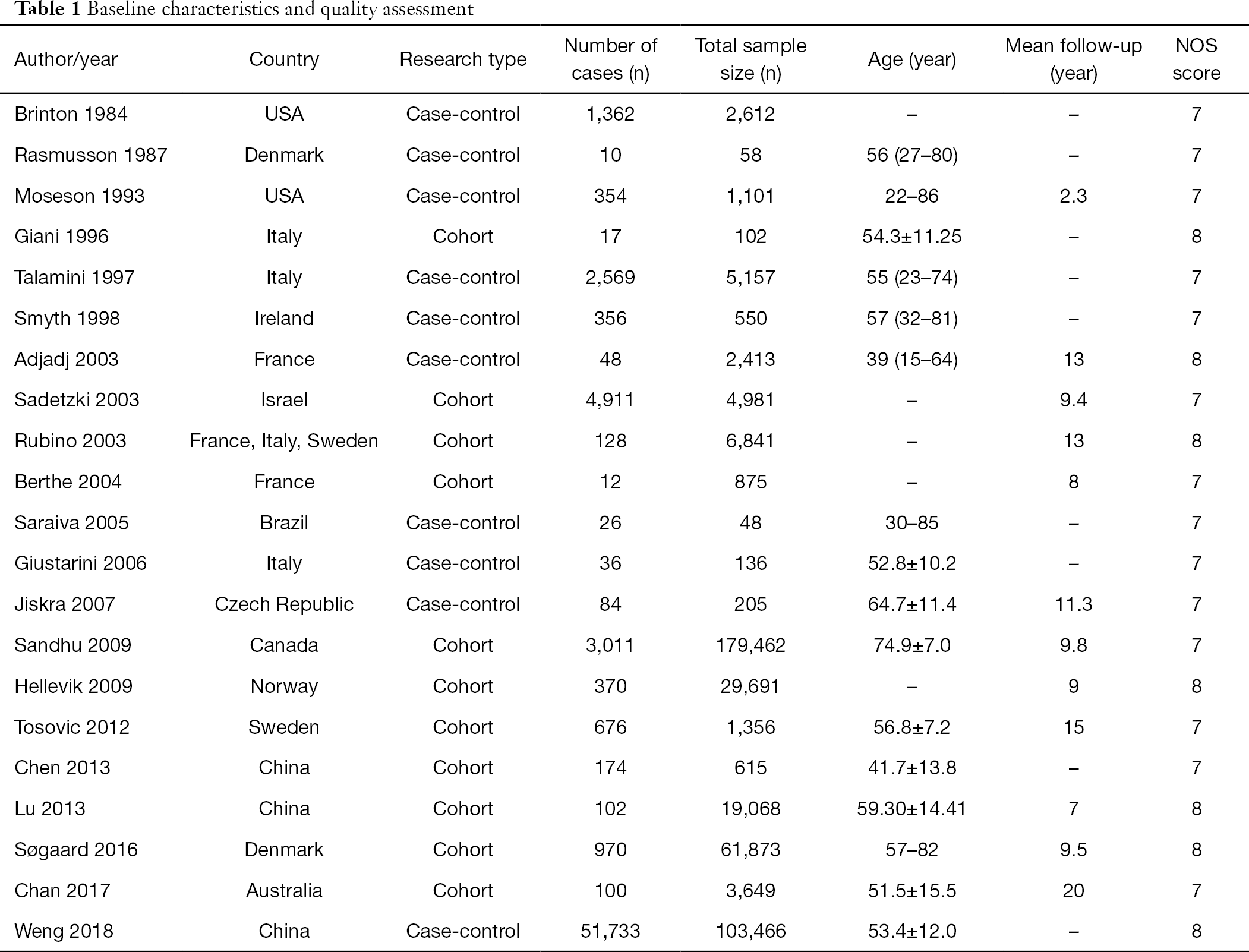 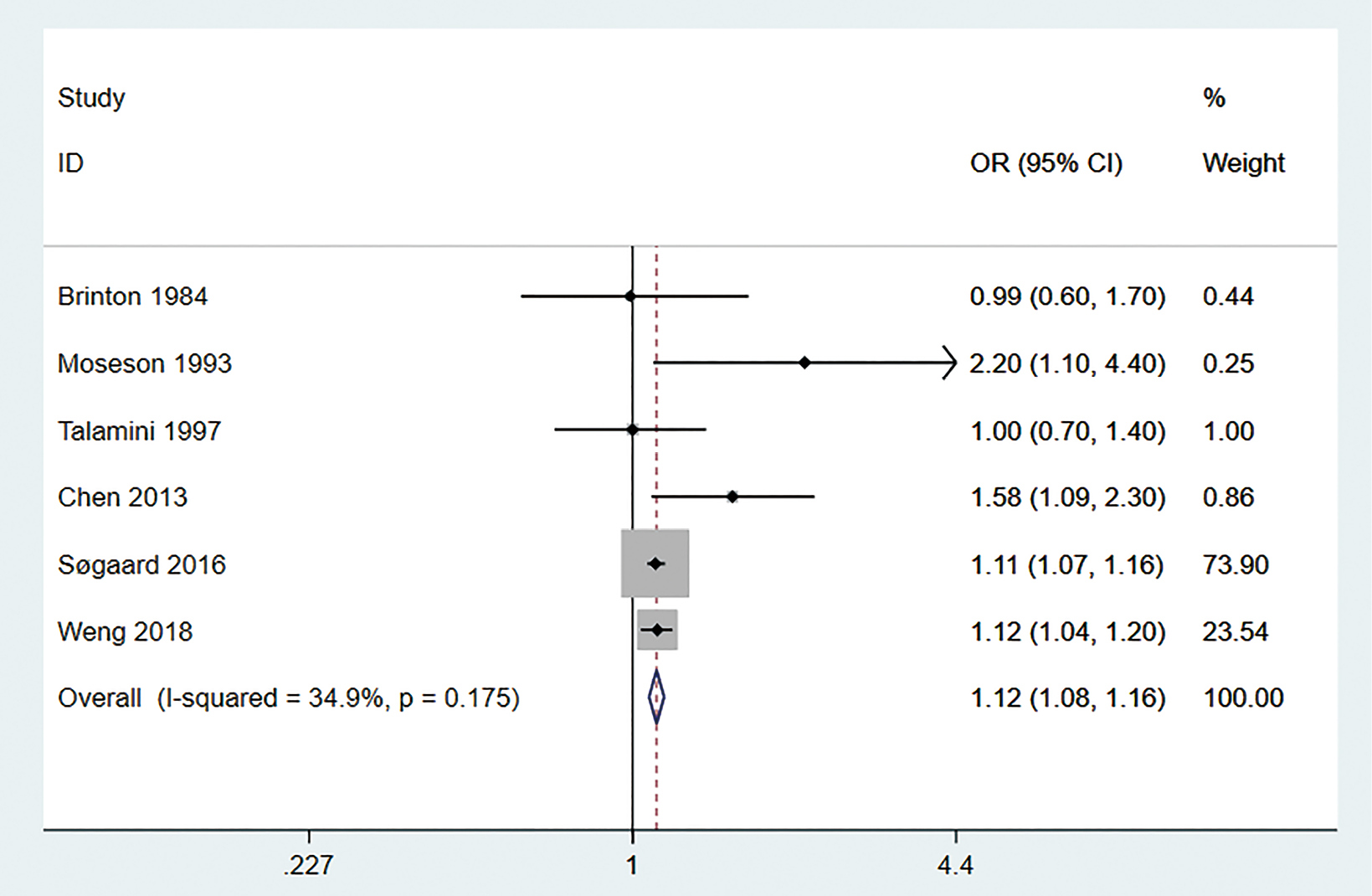 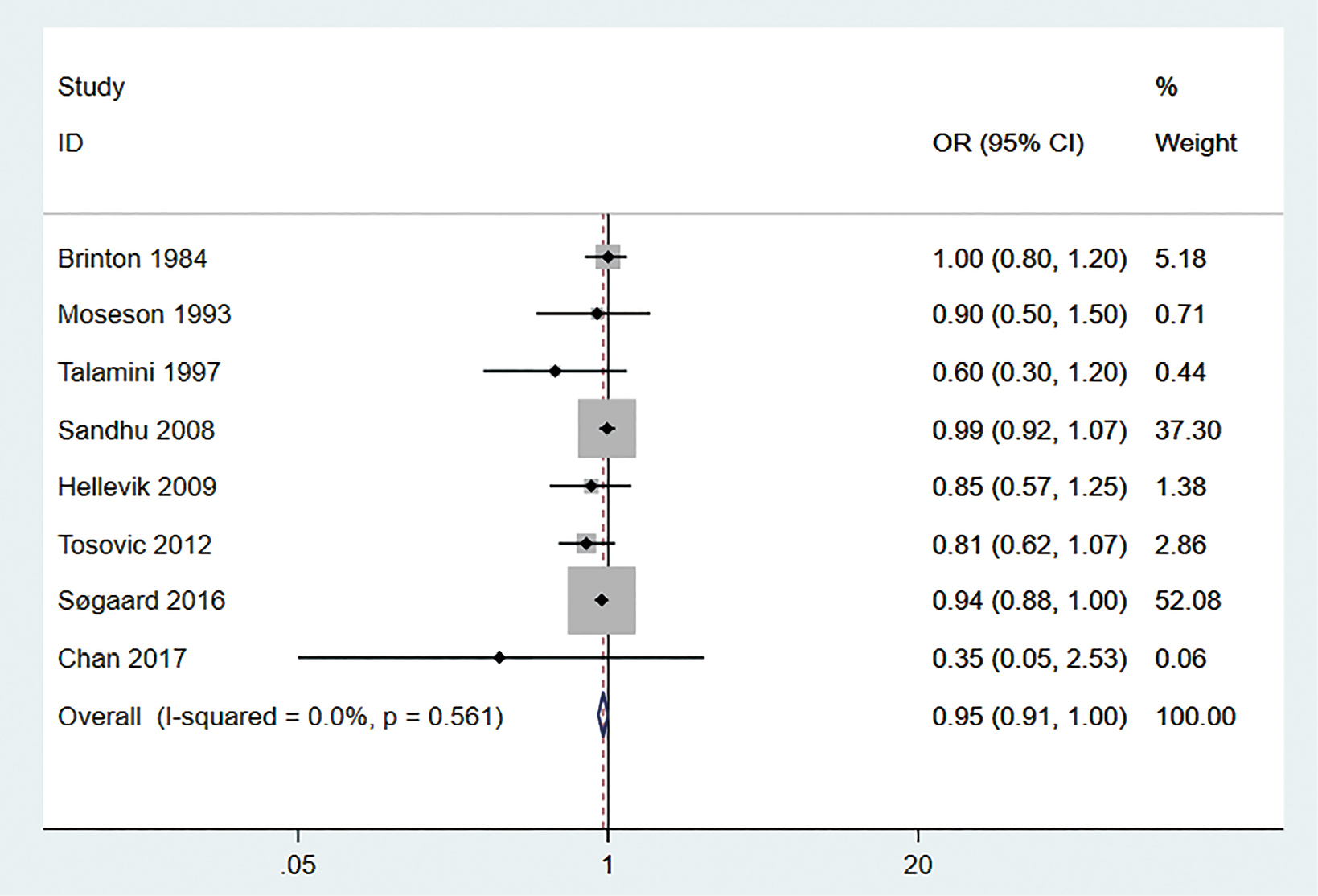 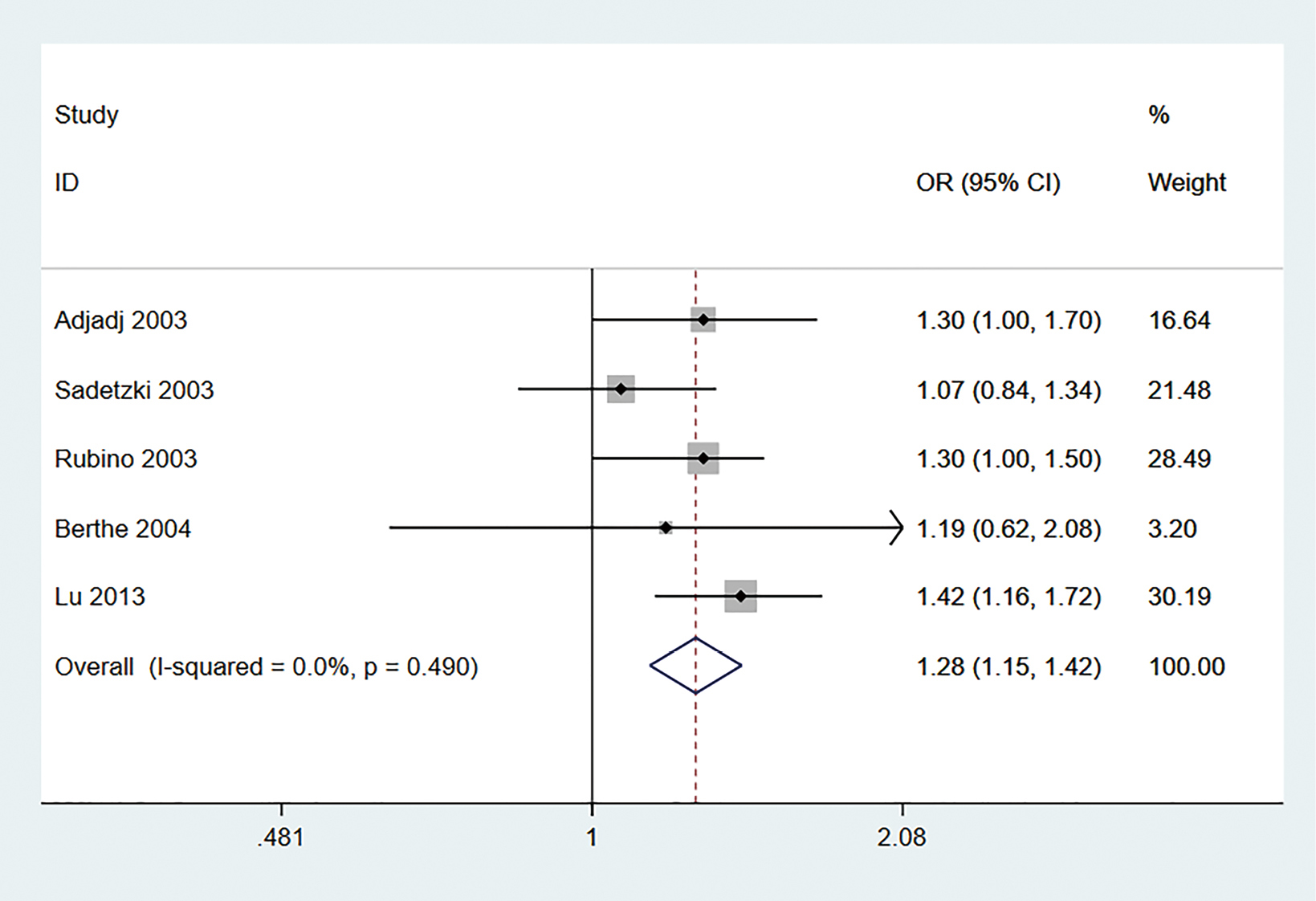 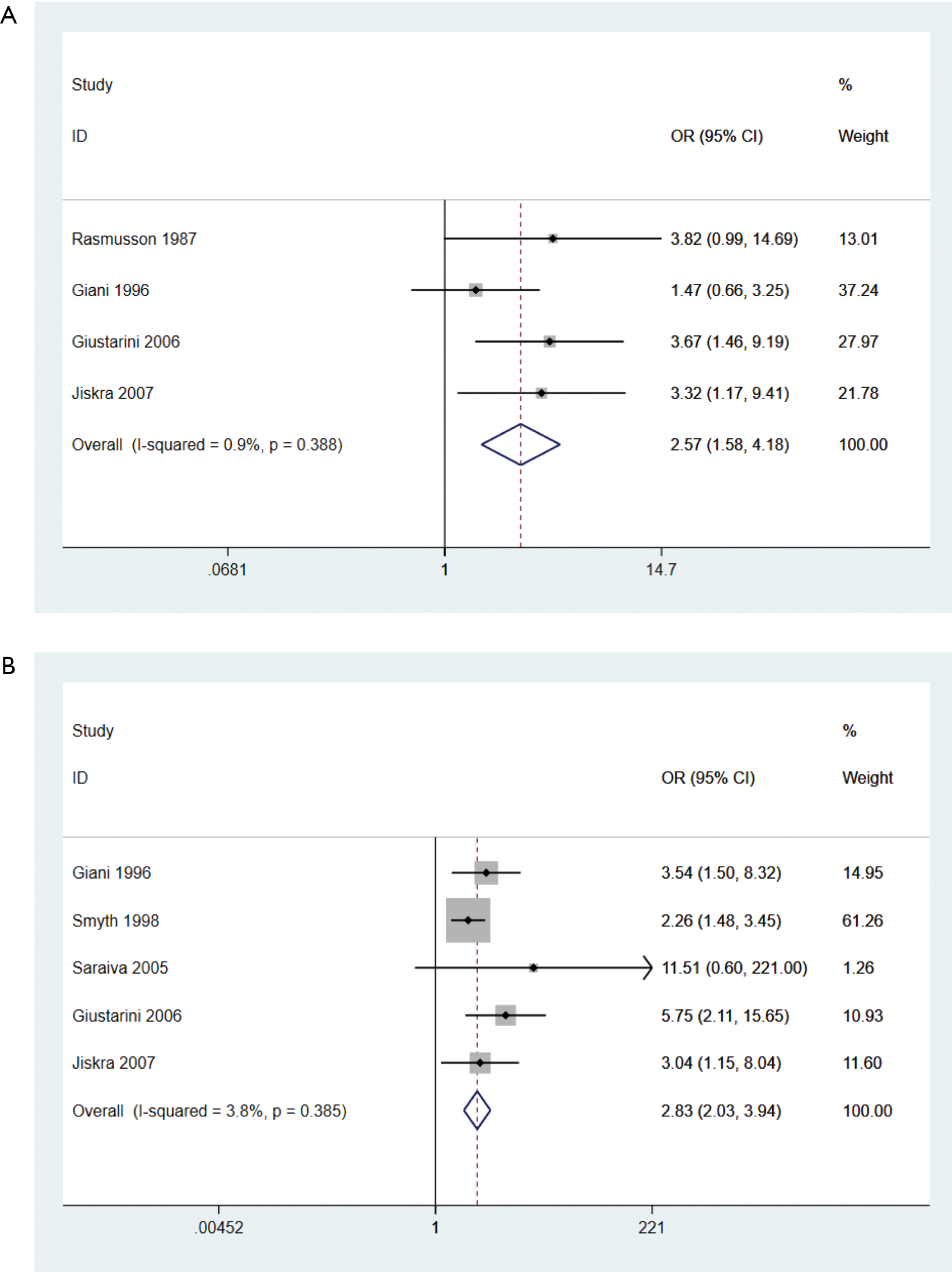 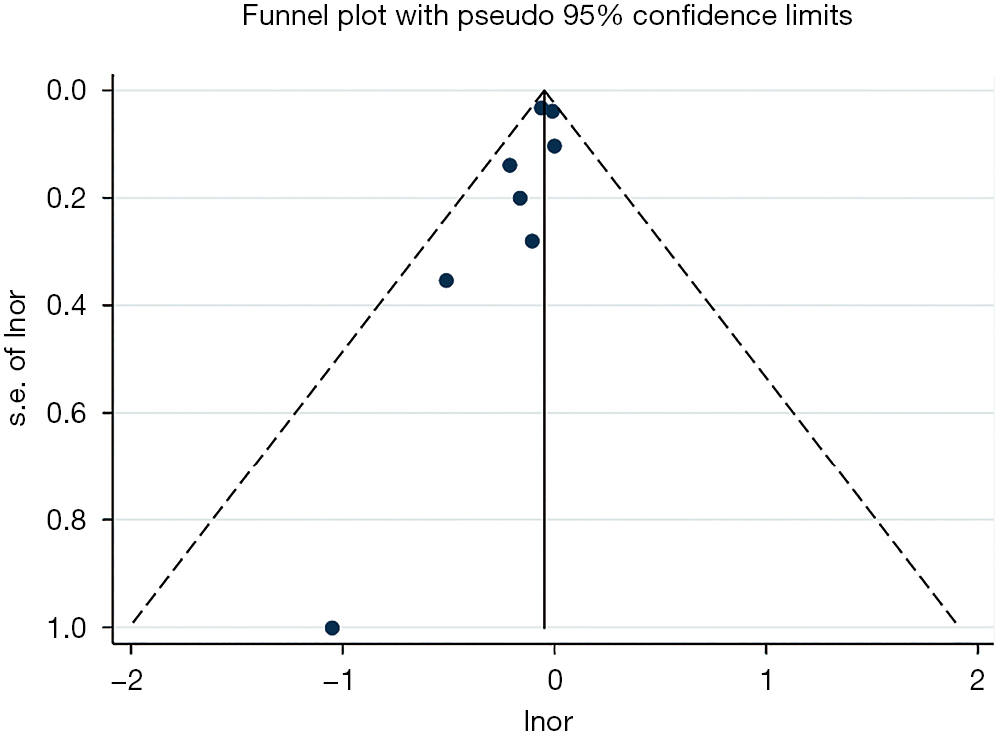 To our knowledge, this is the largest meta-analysis examining the correlation between thyroid diseases (both benign and malignant) and the risk of BC. A total of 21 studies, involving 67,049 female patients with BC, were analyzed. Our meta-analysis results demonstrated that hyperthyroidism, hypothyroidism, thyroid cancer, and AITD were significantly associated with an increased risk of BC.

The causes of BC are complex. Its occurrence has been closely associated with various factors such as genetic, environmental, social, and behavioral factors, as well as the use of hormones and drugs (41,42). The endocrine system plays a crucial role in the physiology and pathology of the breast. The thyroid, being the largest endocrine organ in the human body, plays a major role in the growth and development of cells through regulating the levels of various hormones in the body. Therefore, understanding the relationship between thyroid diseases and the risk of BC is of vital importance.

Previous in vivo experiments in hypothyroid mice demonstrated that low levels of β-catenin expression and activation of the apoptosis pathway on the tumor cell membrane inhibited the growth of BC cells in the mice (43). Additionally, in vitro studies using BC cell lines, showed that triiodothyronine (T3), a TH secreted by the thyroid gland, promoted the proliferation of tumor cells and enhanced the cell proliferation effects of estradiol (E2) (44). Hence, it is possible that TH promotes the occurrence of BC, and patients with hypothyroidism may have a reduced risk of BC due to lower TH levels. Conversely, hyperthyroidism may lead to an increased risk of BC, as shown in this meta-analysis (OR =1.12, 95% CI: 1.08–1.16, P=0.00, I2=34.9%; Figure 2). The low heterogeneity may be due to differences in thyroid hormone measurement instruments in different literatures, differences in the inclusion and exclusion criteria of experimental subjects. However, Hercbergs et al. (12) found no evidence that TH causes BC in the clinical setting (12), despite numerous studies having investigated the association between thyroid dysfunction and BC. That may due to limited clinical and preclinical studies to assess.

An awareness of the relationship between hyperthyroidism and BC is important in improving the clinical detection and prevention of BC in patients with thyroid disease. Additionally, active treatment of hyperthyroidism may reduce the risk of BC.

The results of this meta-analysis demonstrated that in patients with AITD, increased levels of TGAb and TPOAb were associated with an increased risk of BC. This is a summary of the current controversy about whether thyroid auto-antibodies are a risk factor or a protective factor for BC. A causal relationship between AITD and BC has not yet been discovered. Some hypotheses may explain this problem: one possibility is that the immune response to BC and thyroid can be regulated in the same way. Another possibility is that both thyroid and BC express common antigens such as sodium/iodide symporter (NIS) and TPO antibody (45). Our research results suggest that in the future, it is important for us to dig deeper into the causal relationship between auto-antibodies and the increased risk of BC.

There were a few limitations to this meta-analysis. Firstly, several of the included studies adjusted for confounding factors, and as the adjusted variables were not identical in each study, residual confounding factors may still exist. Secondly, since the variables of the study included fewer than 10 articles, the study did not pass the Egger's test for publication bias. Hence, a subjective determination of publication bias was used. The results of the funnel plot analysis suggested more studies are required in future meta-analyses to eliminate publication bias.

This research demonstrated that hyperthyroidism, AITD, and thyroid cancer are significantly associated with an increased risk of BC, while hypothyroidism can reduce the risk of BC.

Reporting Checklist: The authors have completed the PRISMA reporting checklist. Available at http://dx.doi.org/10.21037/gs-20-878

Conflicts of Interest: All authors have completed the ICMJE uniform disclosure form (available at http://dx.doi.org/10.21037/gs-20-878). The authors have no conflicts of interest to declare.