Do surgeons really know how to perform neuromonitoring in thyroid surgery? An awareness study

Surgeons operating on thyroid glands aim mainly at conducting a safe and oncologically sound surgery. A major concern is the iatrogenic injury of the recurrent laryngeal nerve (RLN), as it is a serious complication resulting in severe morbidity. The incidence of temporary and permanent vocal cord palsy after thyroid surgery has been reported to range from 2.0% to 7.2% and 0.2% to 0.9%, respectively (1-3). Symptomatic RLN paralysis constitutes a major cause of impaired quality of life and a factor of job incompetence, postoperatively (4). To minimize RLN related complications, neuromonitoring (continuous or intermittent) is employed, especially by low volume surgeons (with proven benefit) or in extreme conditions and reoperations (3). In 2011, the International Neural Monitoring Study Group proceeded to an international standards guideline statement regarding the standardization of the intraoperative neuromonitoring (IONM) procedure (5). Their statement includes recommendations regarding the equipment setup, the anesthesia, the placement of endotracheal tube, the evaluation of intraoperative loss of signal and finally the waveform definition and assessment. The above represents a valuable “manual” for those being fond of employing IONM during thyroid surgery, and helps to standardize the procedures, establish a global “language” regarding IONM and minimize the possibility of bias (5,6).

The aim of this questionnaire-based observational study is to examine the awareness of endocrine surgeons regarding the use of IONM techniques in thyroid surgeries.

We present the following article in accordance with the SURGE reporting checklist (available at http://dx.doi.org/10.21037/gs-20-579).

This survey project was conducted during the 14th Spring Meeting of the Greek Society of Endocrine Surgeons (GSES), held in Athens, Greece. This was an extended meeting, involving many surgeons that perform endocrine surgery and aiming at issuing recommendations for clinical practice. Such a recommendation, concerning IONM, was published in Hellenic Journal of Surgery. The questionnaire was designed to collect data on IONM usage patterns among Greek surgeons performing thyroidectomies. Participation was voluntary and anonymous. The survey was completed with a structured questionnaire including both multiple-choice and free text questions. The questionnaire consisted of 14 items and was handed to all participants—by the key speaker—during the neuromonitoring session. Surveys were collected at the end of the session. A translated sample of the questionnaire is shown in Figure 1. 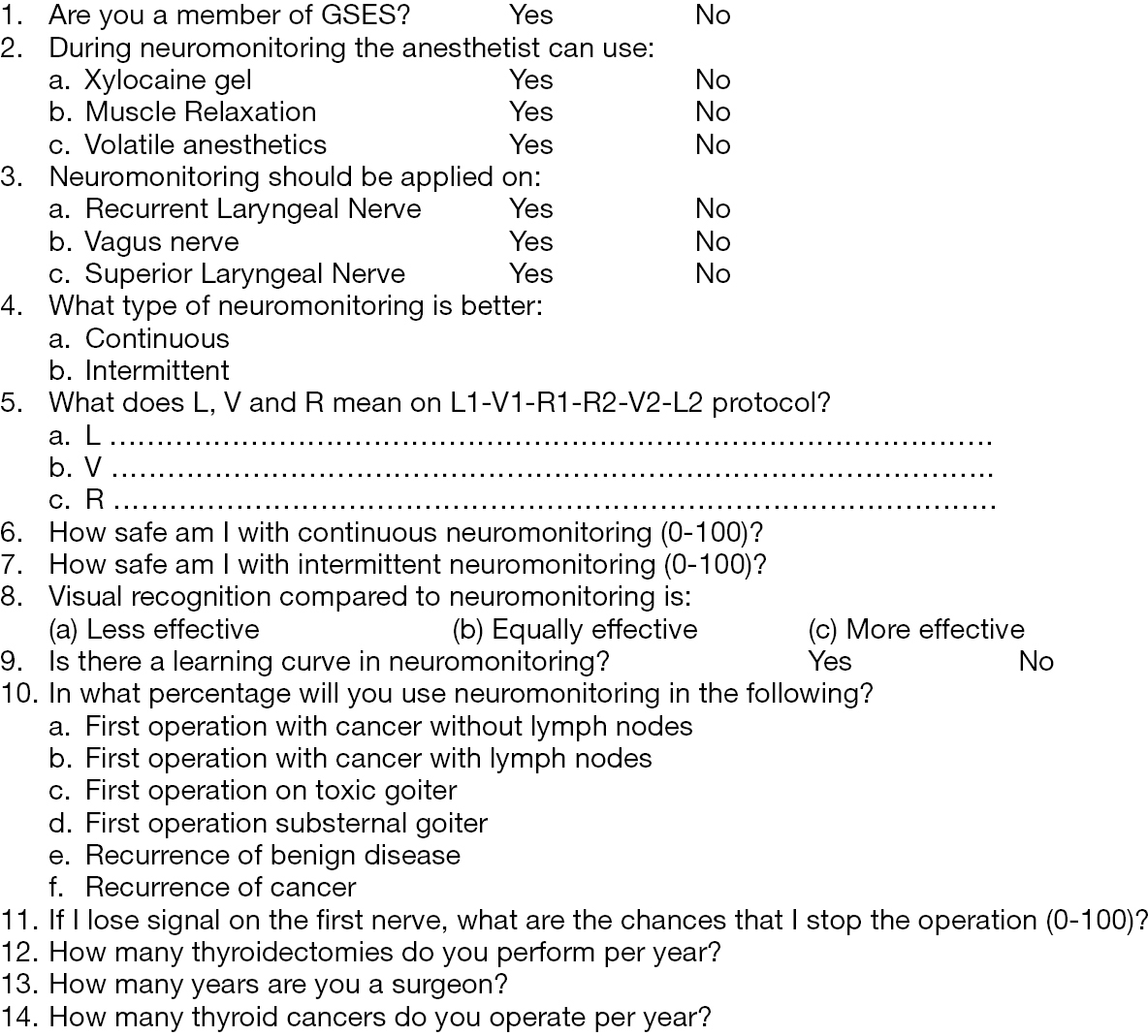 The study was conducted in accordance with the Declaration of Helsinki (as revised in 2013). The study did not involve human experiments, therefore no approval from the university’s ethical board was required. For the same reason, we did not obtain an inform consent from the participants.

In the 14th spring meeting of GSES there were 205 delegates present. Among them there were 35 residents and 6 medical students. Of the 164 experts, there were 18 endocrinologists, 9 registered nurses, 4 internal medicine physicians, 3 anesthesiologists, 3 pediatric surgeons, 1 general practitioner, 1 gynecologist, 1 radiologist and 5 physicians that did not specify their specialty. The surgeons being potential responders were 119. In the session of IONM, there were 83 eligible surgeons present and the questionnaire was answered voluntarily by 59 of them (71.08%). The responders’ group consisted of 26 members of the GSES and 33 non-members.

First question was about membership or not of GSES. The second question asked which medication could be used in the anesthetic protocol, without causing any problems to the IONM. Xylocaine gel was judged inappropriate for IONM by 70.0% of the participants. The respective percentages were 87.9% for muscle relaxants and 2.9% for volatile anesthetics. There was no statistically significant difference between GSES members and non-members.

The third question asked which nerve IONM should be applied to. Eighty-four point two percent of the participants answered the RLN, 69.4% the vagus nerve and 27.6% the superior laryngeal nerve (SLN). There was no statistically significant difference between members and non-members concerning RLN and vagus, although non-members believed that SLN should be monitored while members did not [39.4% vs. 7.7% (P<0.01)].

The fourth question attempted to identify the type of IONM that was the best, according to surgeons’ opinion. Sixty-eight point three percent believed that continuous IONM was the best. There was no statistically significant difference between GSES members and non-members.

The fifth question tried to identify how many participants knew what the initials L, V and R stood for in the L1-V1-R1-R2-V2-L2 protocol. Interestingly enough, only 27.3% of the participants gave a correct answer, with no difference between members and non-members. 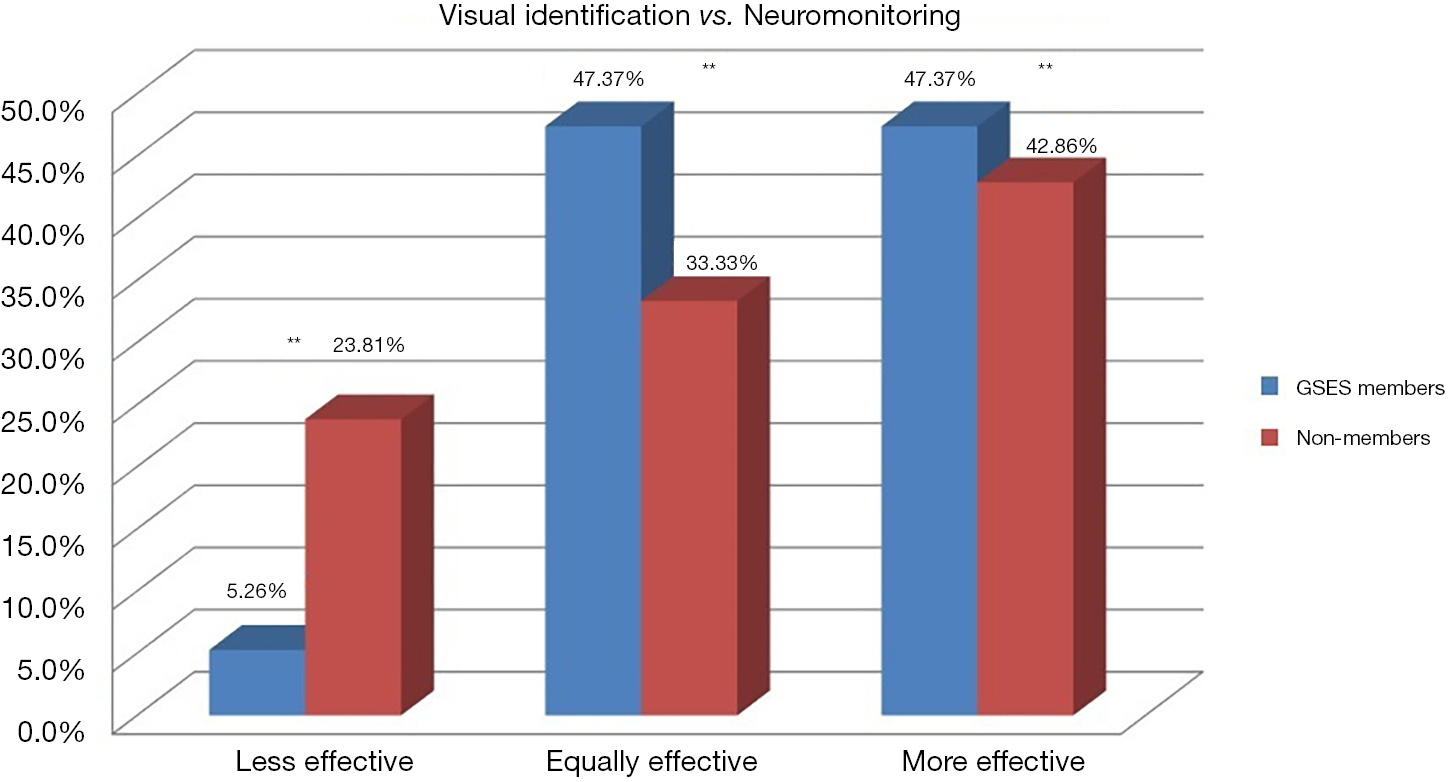 Figure 2 Comparison of perceptions of GSES members and non-members about visual recognition vs. neuromonitoring. GSES, Greek Society of Endocrine Surgeons.

Most of the participants (97.6%) believed that there was a learning curve in IONM.

In the tenth question, the questionnaire tried to determine the probability of using IONM in various conditions. Table 1 displays the data for each condition and analyzes it for GSES members and non-members.

The thirteenth question showed that the participants’ mean duration of surgery practice was 13 years (members vs. non-members 15 vs. 12, P=ns).

The avoidance of the RLN injury during thyroidectomy operations is of high importance, not only due to the reported high risk of the procedure, but also due to the severe lifelong disability it imposes. It is referred in literature that a temporary damage of the RLN can be seen in up to 7.2% of the performed surgeries, while the same percentage is 0.9% for permanent lesions (1,2). Moreover, the damaging of the RLN, with the consequent voice loss, could have serious implications to the individual’s life routine, job and psychology. An observational study, surveying among others the attempt of endocrine surgeons to preserve branches of the laryngeal nerve and their perception of its importance, reports that 90% of them try to preserve it, although only half of them try to identify it (7). Endocrine surgeons reported that they find it very important to preserve the RLN and they usually employ IONM for this purpose. IONM is a relatively modern technique that allows the real-time identification of the branches of the laryngeal nerves and the confirmation of their proper functionality. It is commonly used in the surgical setting worldwide, with figures that reach 95% of the cases (8). In a study from Italy, it is reported that almost half (48%) of the IONM procedures are performed in public hospitals (9). This fact is opposed to the national data in Greece, where the public hospitals are still naive to its use, as far as our experience is concerned.

In our observational study, we evaluated the level at which this technique is used and the characteristics and belief of the surgeons applying it. The participants reported that they would be willing to use IONM in 57.6–90.9% of their surgeries, depending on their type. The surgery types that would mostly require the application of this method were the recurrence of thyroid cancer (90.9%), the recurrence of a benign disease (86.1%) and the operation for thyroid cancer with positive neck lymph nodes (77.9%). However, it is rather questionable whether IONM is truly applied at these percentages, particularly in public hospitals, as the economic circumstances and the insufficient education of the surgeons discourage its use. Although, most participants would employ IONM for their surgeries, 85% of them find this method equally or less effective than visual recognition for identifying the RLN. This is probably a result of their training in the latter method and their unfamiliarity with the former. This hypothesis is also reinforced by the fact that almost all of the participants believe that there is a learning curve in the use of IONM, meaning that significant time and effort are required for mastering and using this technique safely. The majority of the participants believe that the continuous version of IONM is more effective than the intermittent one, with the continuous offering a feeling of greater safety. However, they lack training in these techniques, as indicated by the question referring to their knowledge of “L”, “V” and “R” symbols. To our surprise, only 27.3% of the participants answered correctly. When IONM cannot be used correctly, research on the ineffectiveness or effectiveness of IONM for thyroid surgery should be cautiously interpreted. Regardless of whether the result is positive or negative, incorrect use of IONM increases burden in thyroid surgery.

In the literature, the motives for applying this strategy are reported. It is referred that in most cases IONM is used for legal reasons, while both RLN confirmation and RLN identification constitute the actual reasons in only 20% of the cases (9). In another prospective study, the feeling of the patients concerning the use of this method was evaluated. It was found that the anxiety of the patients the day before surgery was decreased, while their confidence about the procedure and their trust in their doctor were both raised, when using IONM (10). This seems to add value to the use of this technique, not only for the safer and more effective conduction of the surgery, but also for patients’ psychological reasons. Younger surgeons are more likely to use this method, both in literature and in our study (8). In our study, a relatively high percentage of surgeons (56.5%) would continue the procedure if the signal of the nerve was lost intraoperatively, something that comes in agreement with other studies (11). Experienced surgeons (namely the ones that would continue the procedure) trust visual recognition more than neuromonitoring, as they know, even in the lack of valid relevant studies, that the latter method comes with a high percentage of false negative results (loss of signal of an intact and functioning nerve).

Among the members of GSES there are surgeons with the widest experience and with the greatest surgical volume in thyroid surgery in our country. The Greek Society of Endocrine Surgery, as well as other endocrine surgery societies from all over Europe, has issued guidelines, according which an experienced surgeon does not benefit from the use of neuromonitoring and thus is not obliged to use it.

There seem to be many benefits in the use of IONM. First of all, it seems to be a reliable tool not only for anatomically identifying the branches of the laryngeal nerve, but also for monitoring their functionality. Moreover, it satisfies the patients, offering them greater confidence. This could result in higher trust in their doctors and could contribute to their consent for surgery when it is needed. Unfortunately, there seems to be a learning curve for its use and significant training is required. This would currently be hard to achieve in the Greek educational environment where the economic circumstances pose restrictions. Moreover, attention should be paid not to abandon the conventional techniques for identifying the laryngeal nerve, as IONM may not always be available for technical reasons. The cost for its purchase and maintenance could also be an issue that has to be evaluated. More prospective randomized studies which will evaluate the clinical benefit of correctly performed IONM against more traditional techniques, as well as its overall cost-effectiveness, have to be conducted. Evidence is needed to establish the proper indications for its application.

Reporting Checklist: The authors have completed the SURGE reporting checklist. Available at http://dx.doi.org/10.21037/gs-20-579

Conflicts of Interest: Both authors have completed the ICMJE uniform disclosure form (available at http://dx.doi.org/10.21037/gs-20-579). The authors have no conflicts of interest to declare.

Ethical Statement: The authors are accountable for all aspects of the work in ensuring that questions related to the accuracy or integrity of any part of the work are appropriately investigated and resolved. The study was conducted in accordance with the Declaration of Helsinki (as revised in 2013). The study did not involve human experiments, therefore no approval from the university’s ethical board was required. For the same reason, we did not obtain an inform consent from the participants.