Neoadjuvant therapy (NAT) is the standard therapy for locally advanced breast cancer (LABC) and some stage II to III triple-negative (TN) and HER2 positive (HER2+) breast cancer patients as well. NAT can not only make inoperable breast cancer operability, but also achieve breast-conserving surgery (BCS) for patients who are willing to conserve breast, and play a role in drug sensitivity test in vivo (1). With the improvement of the efficacy of NAT that is guided by the molecular subtypes, pathologic complete response (pCR) increased, from the initial pCR rate of 9–13% in the era of anthracyclines to 19–26% with the addition of taxane chemotherapy and as high as 60–70% with the addition of trastuzumab and pertuzumab in HER2+ disease (1-4). pCR after NAT is considered as a prognostic factor for long-term survival benefit, and it is significantly associated with tumor molecular subtypes (5). HER2+ and TN breast cancer have higher pCR rate than luminal type (6,7). For 70–80% of patients with TN and HER2+ breast cancer, axillary lymph nodes (ALNs) are negative after NAT (ypN0) (8-10).

From initial LABC to early breast cancer (EBC), NAT indications got better over the past decade (11). NAT allows the opportunity to evaluate the in vivo efficacy of chemotherapy on the primary breast tumor. NAT is now increasingly used in smaller breast tumors (T1/T2) and TN/HER2+ breast cancer based on this reason, which are linked to the higher pCR (12). In the presence of residual disease after NAT, survival is higher with residual disease in the breast only compared with residual disease in the nodes only and the lowest with residual disease in both. Patients achieving axillary pCR (apCR) have higher 10-year recurrence-free survival and overall survival (83% and 85%, respectively) than those with any residual nodal disease (58% and 55%, respectively) (13,14). Knowing that pCR rate is higher in HER2+ and TN breast cancer compared with luminal type and apCR in these breast cancer patients purporting an improved survival, an important emerging question is whether surgery can be eliminated for patients who obtain apCR after NAT. This study aimed to identify patients among HER2+ and TN breast cancer with low risk for axillary metastases after NAT, and, perhaps, they are suitable for selective elimination of axillary surgery staging. We presented the following article in accordance with the STROBE reporting checklist (available at http://dx.doi.org/10.21037/gs-20-573).

We retrospectively included 865 breast cancer patients who underwent NAT in our hospital from January 2010 and August 2018, and 184 patients (21.3%, 184/865) were TN and HER2+ breast cancer among them. All patients received full-course anthracycline- and/or taxane-based neoadjuvant chemotherapy regimen before surgery. HER2+ patients were given anti-HER2 targeted therapy (trastuzumab) before and after surgery. The specific chemotherapy regimen was displayed as follows: 70 patients used AC/EC-P/T regimen, 81 patients applied AC/EC-PH/TH regimen, 8 patients adopted TCH regimen, and 25 patients utilized TAC regimen. The study was conducted in accordance with the Declaration of Helsinki (as revised in 2013). The study was approved by Shandong Cancer Hospital Affiliated to Shandong First Medical University Ethics Committee (No. SDTHEC20090223) and individual consent for this retrospective analysis was waived.

Breast radiologic complete response (brCR) was defined as no residual disease observed in breast on MRI after NAT, and clinically node-negative disease after NAT (ycN0) was defined as no abnormal ALNs in clinical and radiologic examination. Breast pCR (bpCR) referred to no invasive carcinoma in the breast (ypT0/is), and ypN0 marked no breast malignant cells in ALNs or sentinel lymph nodes (SLNs). Patients, including those with inflammatory breast cancer, distant metastases, disease progression during NAT, receiving radiotherapy and axillary surgery before surgery, were excluded.

The data was analyzed with SPSS 26.0 software package. Independent-sample t-test was carried out for continuous variables, and Fisher exact test or Pearson χ2 test was conducted for categorical variables. Univariate logistic regression analysis was performed to assess the strength of the correlation between predictive variable and ypN0 after NAT, and a multivariate logistic regression analysis was conducted to identify independent effects of these univariate predictive variables (Take P<0.05). 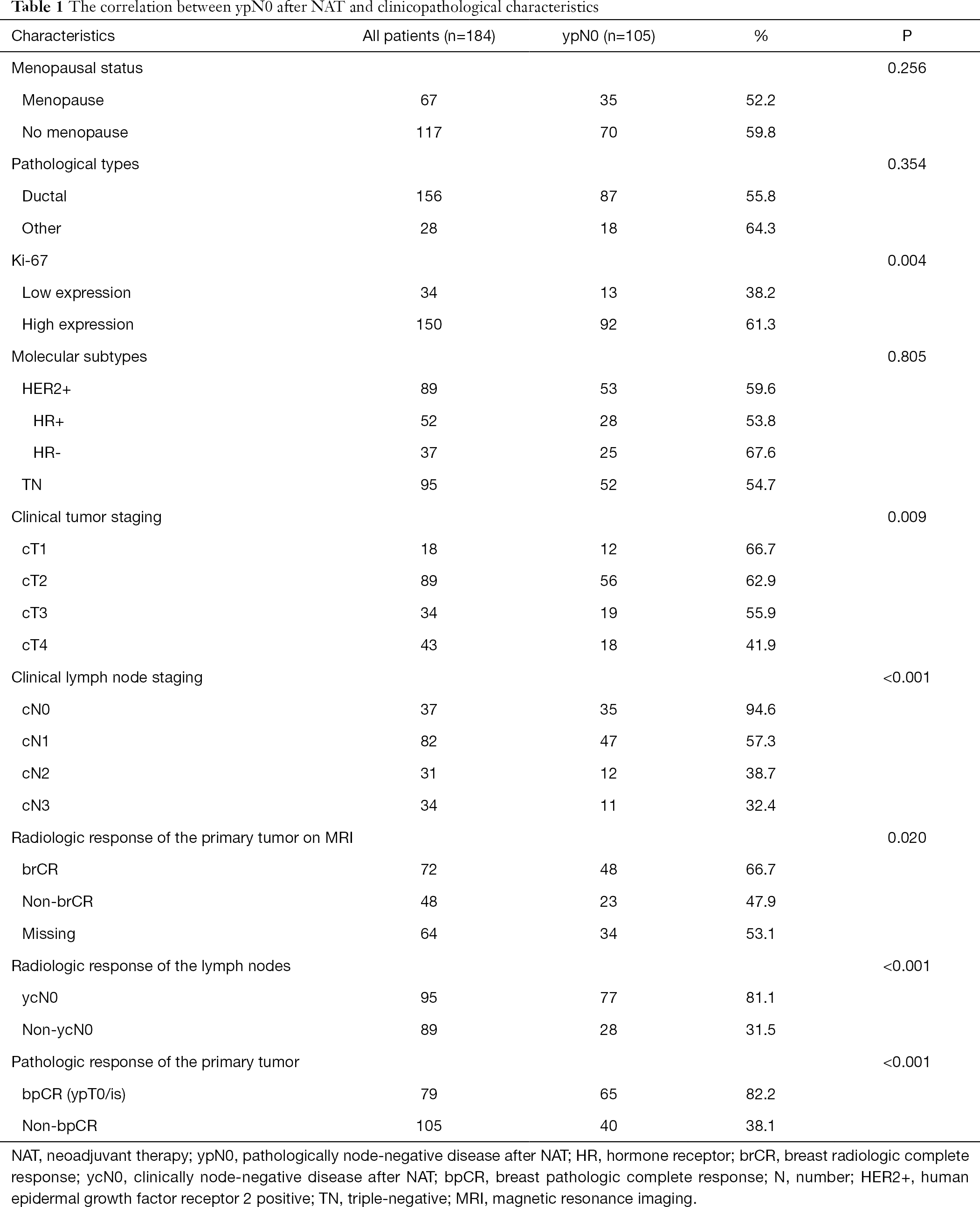 The correlation between ypN0 and clinicopathological characteristics

From initial LABC to EBC, NAT indications got better over the past decade (11). With the improvement of the efficacy of NAT guided by the molecular subtypes, pCR rate increased, especially in TN and HER2+ breast cancer, the pCR rate can reach over 60% (10). pCR can not only be applied as a prognostic factor for long-term survival of breast cancer patients (5), but also affect the local regional de-escalation management for breast cancer (15,16). NAT not only de-escalates the primary breast tumors to increase the chances of breast-conserving, but also converts positive ALNs patients of approximately 40% to negative patients (17). In terms of patients with cN1 to ycN0, 53.6% of experts believed that, when more than 2 SLNs were detected in the St.Gallen Expert Consensus (in 2017), it could guarantee the accuracy of SLNB after NAT (16). Z1071 test (18) and SENTINA test (19) confirmed that false negative rate (FNR) could be reduced to less than 10% by using a combined tracer and detecting more than 2 SLNs. NCCN Breast Cancer Clinical Practice Guidelines (in 2017) also recommend SLNB by adopting the above techniques (Class 2B evidence) (15). However, the complications of SLNB were not negligible. Fleissig performed an 18-month randomized controlled trial (14). The results displayed that, although postoperative complications of SLNB were significantly reduced compared with ALND, 7% of patients had upper extremity edema and 8.7% complained of arm numbness. Our results exhibited that HER2+ and TN patients with cN0/1 to ycN0 and bpCR had the ypN0 rate of 97.6% (40/41) after NAT. For this part of patients, whether can we consider avoiding axillary surgery?

At present, the surgical therapy of breast cancer has entered into an era of continuous optimization of de-escalation therapy, and even avoiding surgery. The ongoing INSEMA (NCT 02466737) and SOUND studies (NCT 02167490) were designed to explore whether EBC patients with initial nodal ultrasonography showing cN0 disease could avoid SLNB, while ASICS study was designed to explore the feasibility of avoiding SLNB after NAT in cN0 patients (20). The publication of these three studies may change the current clinical practice, and purport a new thought for cN0 breast cancer, so as to further achieve axillary de-escalation management (avoiding axillary surgery).

Our research results proved that clinical lymph node staging before NAT, ycN0 and bpCR were the independent predictors of ypN0. Clinical lymph node staging before NAT and ycN0 were easier to be obtained in clinical work, but bpCR could only be learned through surgical pathology, which became the biggest obstacle to predicting ypN0 after NAT. As predictors of bpCR, tumor molecular subtypes, NAT regimens and breast radiologic examination were insufficient in accuracy. However, imaging-guided minimally invasive biopsy (MIB) had the potential to accurately predict bpCR (24,25). Heil (26) performed ultrasound-guided vacuum assisted biopsy (VAB) on 50 patients who achieved brCR after NAT. In histologically representative VAB samples (n=38), the negative predictive value (NPV) and FNR of predicting bpCR were 94.4% (95% CI: 87.1–100.0%) and 4.8% (95% CI: 0.0–11.6%) that were consistent with the results made by MD Anderson Cancer Center study (27). Our central study (data not published, NCT03789851) enrolled 38 patients with radiologic complete and partial response after NAT. The NPV and FNR of predicting bpCR by ultrasound-guided multi-point core needle biopsy (CNB) were 84.2% and 14.3%, respectively. Among them, radioactive iodine seeds were placed around the marker clip before surgery in 26 patients, and then multi-point CNB was performed. The NPV and FNR of predicting bpCR were 92.3% and 7.7%, respectively. If it can be proved that MIB is safe and efficient when predicting bpCR, patients with bpCR may avoid breast surgery. At the same time, it also overcomes the obstacle that bpCR can only be learned through surgical pathology, thus resulting in the elimination of axillary surgery for the HER2+ and TN patients with cN0/1 to ycN0 and bpCR that are confirmed by MIB. Although patients with occult lymph node metastases may miss the opportunity of additional radiotherapy and/or post-neoadjuvant therapies for residual disease for patients who avoid axillary surgery, it can prevent as many patients as possible (>95%) from over-therapy of surgery.

In HER2+ and TN patients, tumor staging, lymph node staging and Ki-67 before NAT, ycN0, brCR and bpCR after NAT were correlated with ypN0. Clinical lymph node staging before NAT, ycN0 and bpCR were the independent predictors of ypN0. bpCR was closely related to ALNs status after NAT. The risk of ALNs residual metastases after NAT in patients with cN0/1 to ycN0 and bpCR was less than 5%, thereby making it possible to selectively eliminate axillary surgery staging, which would reduce postoperative complications, improve patient quality of life and reduce medical costs. If our research conclusions are extended to clinical work, large-scale prospective clinical trials are still needed to study the overall survival rate and local recurrence rate of patients who avoid axillary surgery.

Reporting Checklist: The authors have completed the STROBE reporting checklist. Available at http://dx.doi.org/10.21037/gs-20-573

Conflicts of Interest: All authors have completed the ICMJE uniform disclosure form (available at http://dx.doi.org/10.21037/gs-20-573). The authors have no conflicts of interest to declare.

Ethical Statement: The authors are accountable for all aspects of the work to ensure that questions that are related to the accuracy or integrity of any part of the work are appropriately investigated and resolved. The study was conducted in accordance with the Declaration of Helsinki (as revised in 2013). The study was approved by Shandong Cancer Hospital Affiliated to Shandong First Medical University Ethics Committee (No. SDTHEC20090223) and individual consent for this retrospective analysis was waived.