The mastectomy procedure has evolved since the era of Halstead’s radical mastectomy. The modified radical mastectomy has made it possible for the development of breast conservation techniques using principles of skin preservation. Today, this advancement manifests as skin-sparing and nipple-sparing mastectomies. Currently, more surgeons have been preserving the areola or nipple areola complex (NAC) due to its cosmetic advantages and comparable oncologic safety (1-3). However, postoperative infection is a possible complication in “Direct-to-implant” (DTI) breast reconstruction after skin-sparing mastectomy (SSM) (4).

Like breast reconstruction using implants, bacterial infection is one of the major complications in foreign body insertion surgery. Symptoms of breast infection include abscess or seroma collection, erythema, pain, and wound dehiscence, and sepsis can seriously occur. Also, many plastic surgeons insert the breast implant with acellular dermal matrix (ADM) together. This ADM can result in capsular contracture, which is one of the most frequent complication in breast augmentation or reconstruction. The cause of capsular contracture is multifactorial, but chronic inflammation is known be the main cause. When capsular contracture appears, cosmetic problems such as skin rippling appear.

These infections may be caused by infection from outside the surgical site during or after surgery, but some arguments have suggested that the ductal system of the nipple areola complex in the breast may be the cause. There are normal bacterial organisms in the ductal system of the breast (5,6). In particular, Staphylococcus epidermidis and Bacillus subtilis appeared mostly in the nipple duct system. Although these bacteria are not pathogenic, in foreign body insertion surgery such as implantation, they can form a biofilm on the breast implant surface and cause infection. It has also been reported that several bacterial species appear throughout breast tissue as well as nipple areola complex, with or without breastfeeding (7).

Authors reported somewhat high rates of complications due to infection in direct-to-implant breast reconstruction after nipple-sparing mastectomy (NSM), when compared with SSM with NAC excision. We hypothesized that this could have resulted from microbial spread through the mammary duct, a possible source of infection, while inserting the breast implant. Moreover, concerns regarding the possible impact of poor vascularity of the NAC on nipple and skin necrosis were also investigated in this study.

The aim of this study was to assess the impact of the areola or NAC preservation in DTI immediate breast reconstruction. We assessed postoperative complications of breast reconstruction following NSM, areola-sparing mastectomy (excision of nipple) and SSM with NAC excision. In the context of this study, NSM indicates SSM with NAC preservation, while areola-sparing mastectomy means SSM with areola preservation without the nipple. We present the following article in accordance with the STROBE reporting checklist (available at http://dx.doi.org/10.21037/gs-20-606).

A retrospective cohort study of DTI breast reconstruction after skin-sparing mastectomy was started in 2011. The medical records of patients who underwent immediate breast reconstruction following skin-sparing mastectomy from May 2011 to July 2017 were collected. The study was conducted in accordance with the Declaration of Helsinki (as revised in 2013). The study was approved by institutional review board of Yeungnam University Hospital (NO. 2020-06-072) and informed consent were taken from all the patients of clinical photographs at the figure.

Indications for NAC preservation was based on the clinical decision in accordance with the pathologic and radiographic involvement of NAC (8). While performing mastectomy, the retro-areola margin was taken from the nipple and saved as a frozen section (9). A positive frozen section was treated with nipple removal or removal of the whole NAC. Determination for areola preservation was made intraoperatively based on the experience of the breast surgeon. 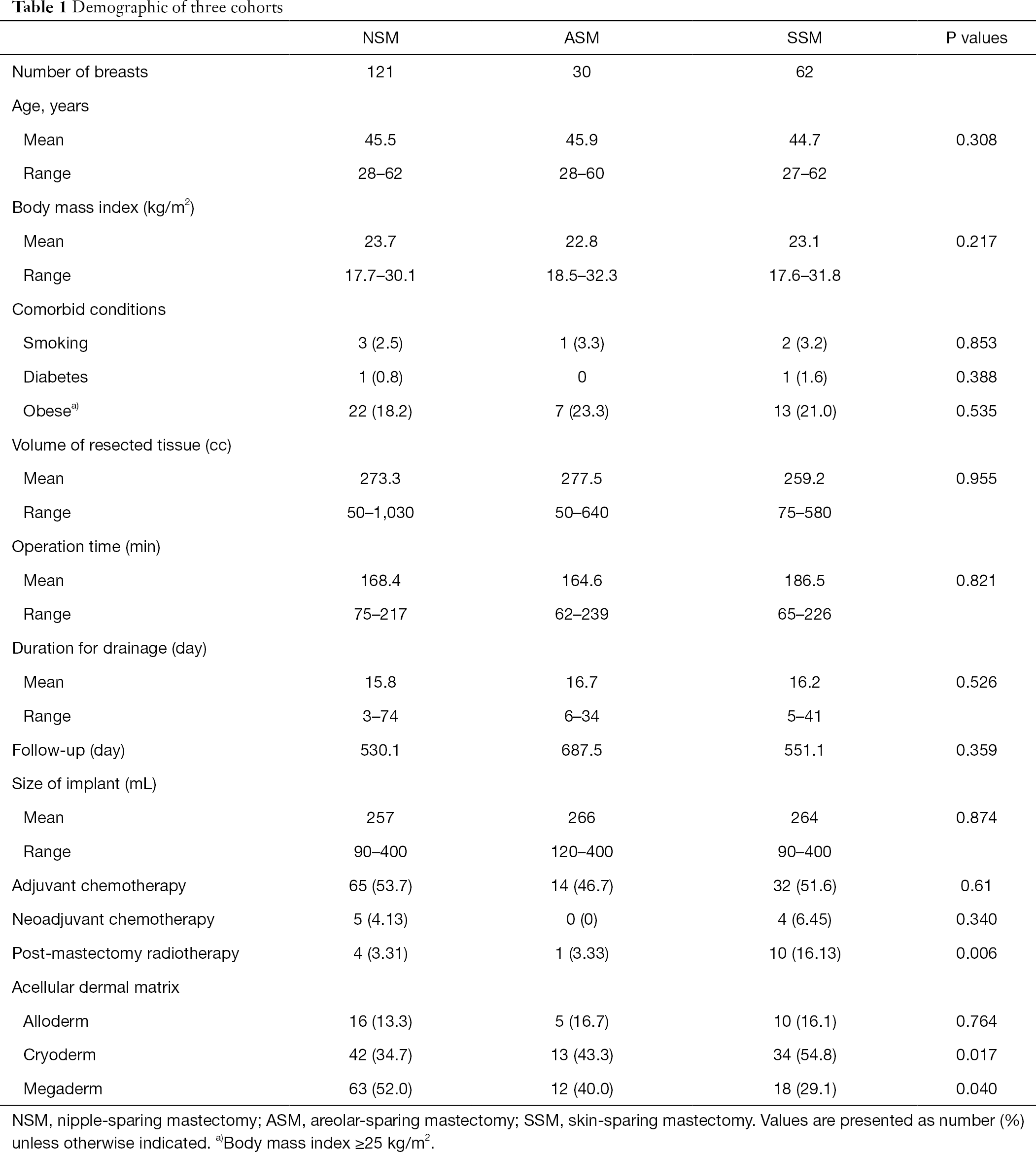 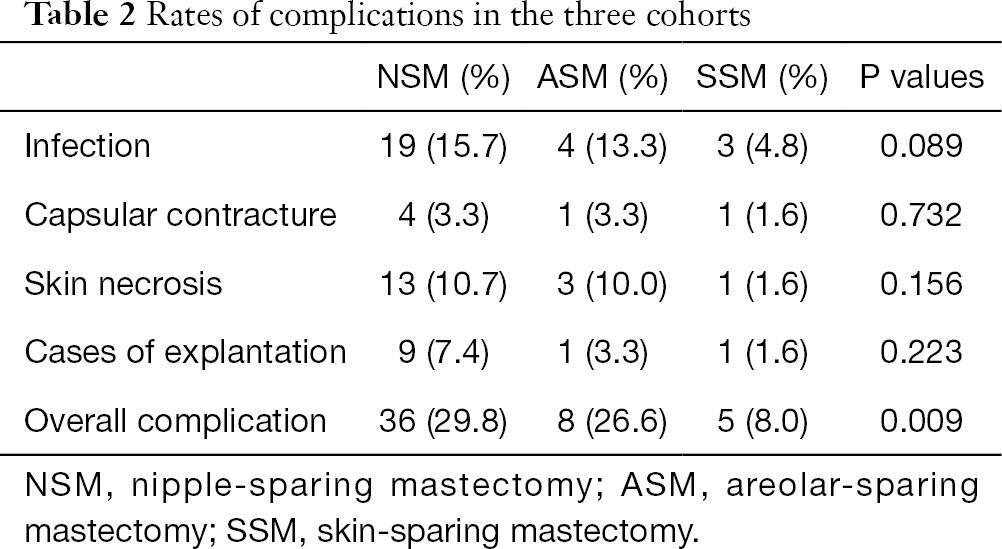 Table 2 Rates of complications in the three cohorts
Full table

Statistical analysis was performed using by SPSS Version 19.0. Patient-related characteristics were compared among the two Cohorts. Descriptive statistics were used to compare the postoperative complications, including infection, capsular contracture, skin necrosis, explantation, and total nipple necrosis, across three groups. The Pearson chi-square test was performed to analyze categorical variables and to check for correlations between NAC preservation and outcomes. A value of P<0.05 indicated statistical significance.

From 209 patients, there were four cases of bilateral reconstruction; thus, 213 mastectomy procedures were performed in total. The mean patient age was 45.3 years, with a range of 27–62 years; the mean follow-up was 3.08 years. Table 1 presents patient characteristics. We compared the three groups, separately, but no statistically significant differences were observed. Of the 213 patients, 121 patients were in the NSM group, 30 patients in the ASM group, and 62 patients in the SSM group, respectively. Table 2 shows the complications among patients across the three groups, including infection, capsular contracture, skin necrosis, and explantation. NSM group exhibited a significantly higher rate of infection and overall complication in comparison to SSM group, whereas ASM group exhibited a significantly higher rate of overall complication in comparison to SSM group. There were no statistically significant differences in overall complications between NSM and ASM group (Tables 2,3). For the main comparison between patients NSM group and SSM group, the infection rates were significantly lower in the SSM group (4.8%) than in NSM group (15.7%) (P=0.033), but not significantly different from ASM group (13.3%) (P=0.21). SSM group showed a significantly low rate of skin necrosis (1.6%) compared to the NSM group (6.6%) (P=0.037). With respect to capsular contracture, there were no statistical differences across the three groups. Regarding major complications, explantation of implant occurred in nine patients in NSM group and one patient each in ASM and SSM group. However, these rates were not statistically different (P>0.05). 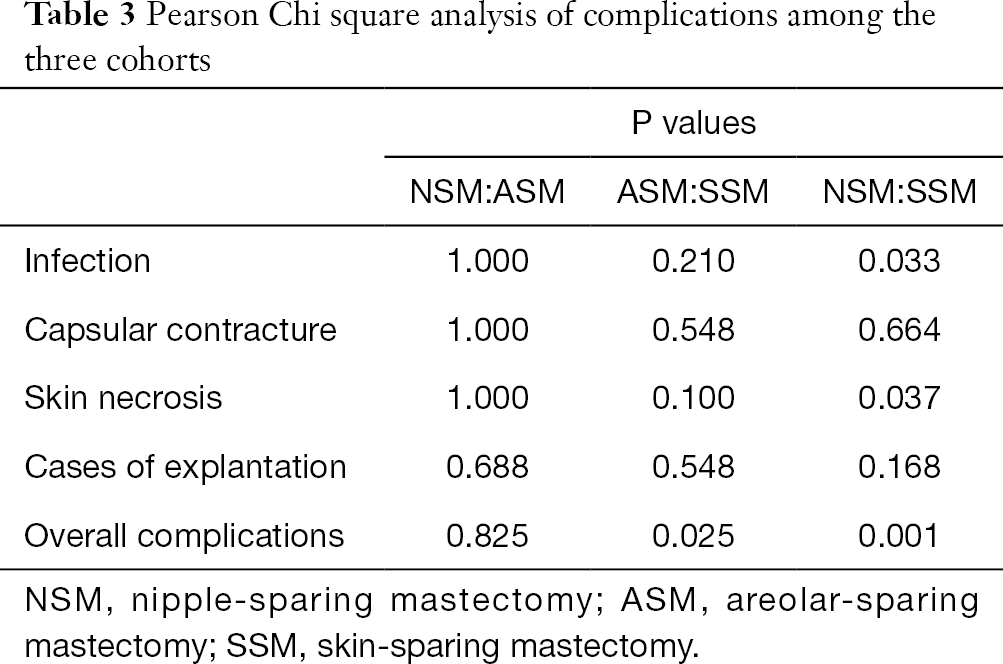 We experienced a relatively high rate of skin necrosis in cases undergoing DTI breast reconstruction after NSM when compared with after SSM. Thus, we hypothesized that this could be caused by vascular vulnerability in NAC. The intercostal artery was regarded as the main and constant contributor of blood supply to the NAC via its perforators and anterior intercostal branches (10). Depending on its variable anatomical patterns of blood supply, in some cases, nipple vascularity may potentially be compromised and result in nipple necrosis (10-13). In this perspective, the higher rates of skin necrosis in NSM group, compared with SSM group, could be explained by the possible destruction of the nipple vasculature while there is excessive tension or dissection at the base of NAC (14). After mastectomy, the dermal flap becomes thinner, and flap vascularity is regarded as a very important factor for the proper healing of flaps (15). Damage, formation of a hypovascular subdermal plexus, or local perforation of the NAC and periareolar region may result in delayed healing and skin necrosis (16).

Additionally, the lactiferous duct could contribute to the increasing tendency of postoperative infection in NSM followed by DTI breast reconstruction. Previous studies have shown that bacterial strains reside in the peri-nipple area (17-19) and the lactiferous duct may play a role in the transfer of bacteria from the skin to the breast parenchyma while handling the nipple and areola. Therefore, the underlying cause of infection in immediate breast reconstruction with DTI following skin-sparing mastectomy may arise in the process of NAC preservation. The complication rate of infection was significantly lower in SSM group. Such results are noteworthy considering the risk of transductal transfer of bacteria. We do not routinely perform wound culture. We assessed the pattern of discharge, the pattern of skin color around wound, the healing state of wound, and the presence of a fever. Explantation was observed in all cases in the infection group, which highlights the importance of exercising caution when operating on the nipples.

Several studies have discussed how to block exposure of NAC through a nipple areola shield (14,20). N. Collis applied adhesive filme on NAC in preventing perioperative expression of bacteria, contaminating the operative field. 33% of breasts yielded bacterial growth form swabs under the film postoperatively. Roger also reported the exposed nipple during breast augmentation is potential source of implant contamination. He studied 63 nipples in breast augmentation and nipple shields yielded 34.9%of positive for bacterial contamination. On the basis of these findings, we suggest that caution should be exercised when managing DTI breast reconstruction combined with nipple-sparing mastectomy. Such procedures include: the aseptic preoperative drape technique, preoperative coverage of the NAC and umbilicus with surgical film, and handling of breast and NAC with minimal tension. Moreover, an omega-shape periareolar skin incision and anchoring suture are effective ways to decrease suture site tension and prevent skin necrosis (21).

Additionally, irrigation using a solution of antibiotics in combination with postoperative hyperbaric therapy is useful for avoiding intraoperative infection and skin flap ischemia. Povidone-iodine irrigation shown effective prevention of surgical site in other general surgery (22). In Adams’ in-vitro study, the combination breast irrigation of bacitracin, cefazolin, and gentamicin reported effective control of bacteria (23). In subsequent clinical studies, the capsular contraction rate was reported to be reduced to four to five time (24). Pfeiffer et al. reported decrease of infection in cosmetic breast surgery by using antibiotic mixed saline irrigation in breast pocket (25). There are slight differences depending on the irrigation method after implantation, but antibiotic and povidone mixed irrigation has little effect on the implant and reduces inflammation and infection (26).

Postoperative hyperbaric oxygen treatment might be used effectively by optimizing fibroblast proliferation and collagen synthesis, for that, it has been used in diabetic foot, crush injury, radiation-induced injury and burn wound (27-29). In this study, all patient who had postoperative skin necrosis went through hyperbaric oxygen treatment at 2 ATA for 60 minutes. Surgical debridement was done if necessary. Although this study does not show that hyperbaric oxygen treatment critically prevent skin necrosis, previous studies suggest that it can be used to prevent and treat skin necrosis. Also, unequal sample size of each cohort and retrospective character limits statistical refinement. Breast skin flap thickness after is major factor of skin necrosis. It would be better to evaluate the complication rate with breast flap thickness. Some study obtained bacterial culture from nipple areola complex. In a further study, it is necessary to confirm which bacteria are detected by performing culture inside the breast when reoperation is performed in a patient with breast infection. Further, we will confirm that these bacteria are the same as those detected in the nipple areola complex.

This study did not have any significant difference of complication when the three ADM types were compared. There was no significant difference in each group by examining the underlying disease and postoperative treatment of patients in the demographic of the three groups. Therefore, in future studies, it is necessary to compare complications by matching the patient's underlying disease, ADM, postoperative treatment method, and timing as a prospective method.

Nipple sparing mastectomy tended to show higher rates of infection and skin necrosis than skin sparing mastectomy. On the other hand, there was no difference in the incidence of complication when excision of nipple only and compared with areola sparing group. Nipple areola complex is an important cosmetic component of the breast, and reconstruction is possible after resection. Therefore, it should be performed after sufficient consultation with the patient for prophylactic excision.

Funding: This study was funded by the 2018 Yeungnam University research grants.

Reporting Checklist: The authors have completed the STROBE reporting checklist. Available at http://dx.doi.org/10.21037/gs-20-606

Conflicts of Interest: All authors have completed the ICMJE uniform disclosure form (available at http://dx.doi.org/10.21037/gs-20-606). The authors have no conflicts of interest to declare.

Ethical Statement: The authors are accountable for all aspects of the work in ensuring that questions related to the accuracy or integrity of any part of the work are appropriately investigated and resolved. The study was conducted in accordance with the Declaration of Helsinki (as revised in 2013). The study was approved by institutional review board of Yeungnam University Hospital (NO. 2020-06-072) and informed consent were taken from all the patients of clinical photographs at the figure.