Focused parathyroidectomy (FP) is the gold standard for the treatment of primary hyperparathyroidism (PHPT) once it has been concordantly localised by USG and sestamibi (MIBI) scan (1-5). Before the advent of the MIBI scan in the late 1990s, bilateral neck exploration (BNE) was the preferred method for PHPT (6-9). However, over the past two decades, the operative management of PHPT has changed from BNE to FP because most cases of PHPT are caused by a single adenoma (80–85%) (10-14).

Although the advent of intraoperative parathyroid hormone (IOPTH) testing decreased the failure rate of FP, multi-glandular disease (MGD) is reported in 8–33% of patients (15,16), and BNE is mandatory when MGD is suspected.

Advances in non-invasive sensitive imaging techniques such as MIBI scan, neck ultrasonography (USG) and neck four-dimensional computed tomography (4DCT) have improved the accuracy of preoperative localisation studies, thus enabling the detection of single or multiple gland disease (13,17,18). However, determining whether FP or BNE is the more appropriate method is difficult in cases with discordant imaging results.

FP could have a high success rate in PHPT patients with concordant results on USG and MIBI scans, and the aim of this study was to compare the efficacy of FP and BNE according to the concordance of results on these two imaging methods, using follow-up data in patients with PHPT.

We present the following article in accordance with the STROBE reporting checklist (available at http://dx.doi.org/10.21037/gs-20-611).

The study was conducted in accordance with the Declaration of Helsinki (as revised in 2013). This study was approved by the Institutional Review Board of Asan Medical Center (No. 2018-0594). The need for informed patient consent was waived because of the retrospective nature of the study. A total of 212 operations for PHPT performed at Asan Medical Center between 2000 and 2010 were retrospectively reviewed. After excluding 21 patients with a lack of clinical data, 191 patients were included in the analysis. All patients underwent preoperative USG and MIBI scans, and all diagnoses were confirmed histopathologically after the operation. In our institution, intact PTH levels were determined using the radioimmunoassay method, which takes >1 hour to perform. So, IOPTH monitoring was not performed. Instead, postoperative PTH levels were assessed within 24 hours after surgery. Regardless of the surgical extent, all patients were regularly followed with medical examinations including questioning on hypercalcaemic symptoms, physical examination, and measurement of serum calcium, ionised calcium, and serum PTH. These examinations were performed every 3–6 months for at least 2 years after surgery, after which patients were seen every year.

FP was performed using the lateral approach. After skin incision and the making of subplatysmal flaps, the fascia of the medial border of the sternocleidomastoid muscle was opened and a space was created between the internal jugular vein and strap muscles. The enlarged parathyroid gland was then identified and resected. BNE was performed using a low transverse skin incision. After making subplatysmal flaps, the strap muscle was divided at the midline. The thyroid gland was retracted medially, all suspicious parathyroid lesions were explored, and enlarged parathyroid glands were resected. Thus, the number of resected parathyroid glands in the BNE for MGD varied from 1 to 3.5. None of the patients underwent autotransplantation or had permanent hypoparathyroidism.

The 191 patients were divided into two groups according to concordance in preoperative neck USG and MIBI scan imaging studies: those with discordant results and those with concordant results. Clinicopathological features, including preoperative calcium, PTH, phosphorus and ALP levels; postoperative calcium and PTH levels; pathologic diagnosis; multiplicity; and the results of the localisation study were compared between the groups. Recurrence was defined as elevated calcium and PTH at 6 months post-operation. Persistence was defined as elevated calcium and PTH within 6 months of operation. Negative imaging studies were defined as those where parathyroid lesions were not detected on the imaging. The imaging study result was considered positive or negative based on reports by the radiologist and nuclear medicine physician. Imaging studies reporting positive findings were divided into single, unilateral multiple, or bilateral multiple according to direction and number. Concordance was defined as parathyroid lesions being detected on both USG and MIBI. The discordant group was subdivided into three groups as follows: negative detection on both USG and MIBI scan, single-negative detection on USG or MIBI, and discordant localisation on USG and MIBI.

There were no differences in the following demographic and laboratory characteristics between the concordant (n=137) and discordant (n=54) groups: age, sex, size of the parathyroid gland, and preoperative and postoperative serum calcium levels, PTH levels, serum ALP levels and bone mineral density (BMD). Operation time was longer in BNE than in FP; however, it did not differ according to concordant or discordant findings within the same operation type (FP or BNE; Table 1). 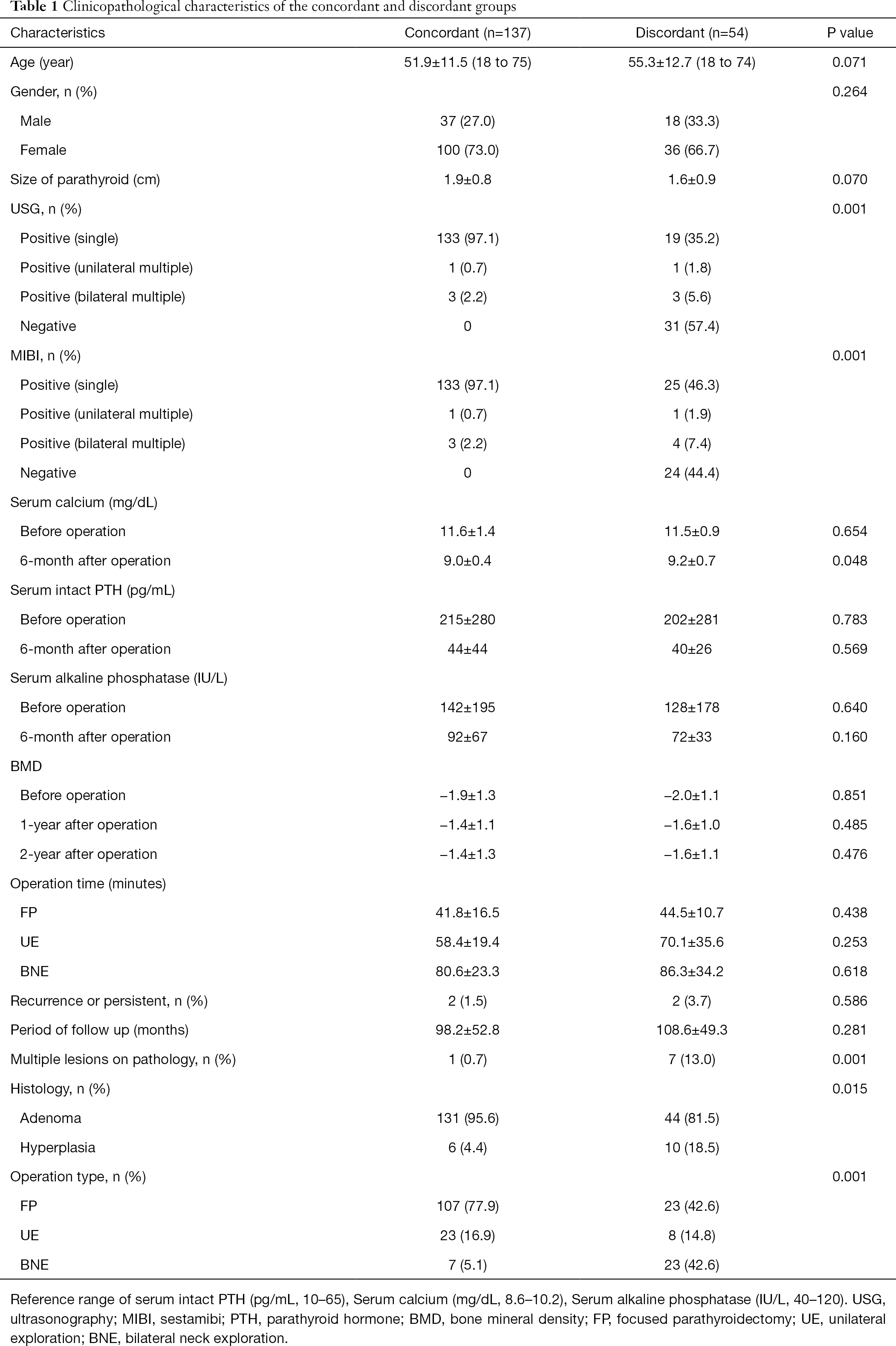 In the concordant group, there was one case of persistent disease after FP and one recurrence at 11 years after FP. In the discordant group, there was one case of persistent disease after BNE and one recurrent case at 2 years and 6 months after unilateral exploration (UE). The sensitivity for detecting multiple parathyroid lesions in the discordant group was 57.1% (4/7) using USG and 71.4% (5/7) using MIBI scan. Of the 54 patients in the discordant group, 23 (42.6%) were positive on USG and 30 (55.6%) were positive on MIBI scan, with seven patients being double-negative on both USG and MIBI scans. Therefore, almost all parathyroid lesions were localised using a combination of USG and MIBI scan (Table 1). 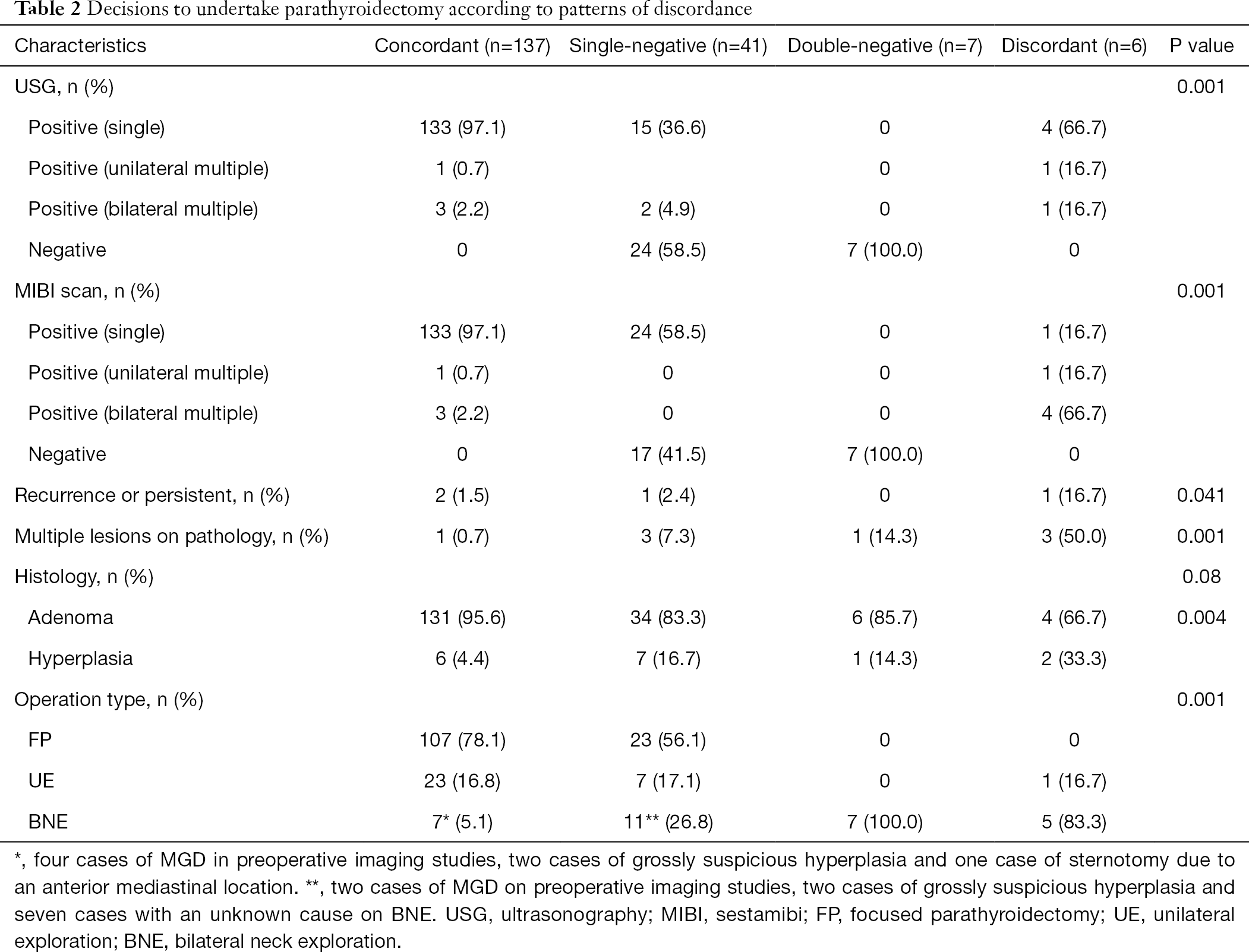 In the univariate analysis, the rate of recurrence was higher in patients with hyperplasia pathology (HR, 12.4; 95% CI, 1.6–94.5) than in those with adenoma. The parathyroidectomy method selected did not affect recurrent or persistent hyperparathyroidism. Multivariate analysis showed that patients with hyperplasia were not at a significantly different risk of recurrence and persistent hyperparathyroidism than those with adenoma (Table 3).

BNE was the gold standard for the treatment of PHPT before the development of localisation imaging (6,8). However, because PHPT is caused by a single parathyroid adenoma in over 80% of cases, FP and UE, which can achieve high cure rates in most cases, are currently the preferred treatment options (19-21). MGD and ectopic locations are common causes of surgical failure. In the cases included in this study, MGD was uncommon and hyperplasia was not confirmed preoperatively, as is commonly the situation. Thus, many surgeons recommend multiple localisation methods such as USG, MIBI scan and IOPTH (5). If IOPTH is not used, the decision on operative method is mainly made according to imaging study results. However, discordant findings between USG and MIBI scans can make the decision difficult. Although IOPTH monitoring was not performed in this study, the cure rates of PHPT using only USG and MIBI scans were satisfactorily high, at 98.5% in the concordant group and 96.3% in the discordant group.

In discordant localisation studies, surgeons generally prefer BNE over FP or UE with IOPTH monitoring, but there may be no difference in the cure rate between BNE and UE groups (9). Additional imaging using neck USG is helpful for selecting FP in most PHPT patients with negative MIBI scan results (13,22). In addition, with the increasing accuracy of preoperative localisation studies, there is a growing discussion on whether IOPTH is necessary (10,23,24). The present results indicate that selection of the appropriate operation method with preoperative localisation studies eliminates discordance as a risk factor for recurrence and persistent hyperparathyroidism. In this study, either FP or UE was performed in the following situations: when USG and MIBI scan findings were discordant regarding a unilateral location, and when a single-negative lesion was detected on both USG and MIBI scan. However, discordance between USG and MIBI scan findings regarding a bilateral location or a double-negative result on both USG and MIBI scan was an indication for BNE.

Whether hyperplasia is present before and during parathyroidectomy cannot be determined. The diagnosis of single adenoma versus MGD is based on permanent biopsy. Therefore, further resection of the parathyroid gland is performed according to gross findings and IOPTH data (25). However, frozen biopsy results provide limited information on whether a lesion is parathyroid rather than pathological change (26).

IOPTH has a major effect on targeted operations without additional dissection (5). As the detection rate of MGD in USG and MIBI scans was low, additional IOPTH could avoid high rates of operative failure (21). In addition, IOPTH monitoring remains an effective strategy for evaluating successful parathyroidectomy, especially in patients with non-localised lesions, a risk for MGD, or revision cases (25,27,28). However, some surgeons argue that IOPTH is inaccurate for determining complete excision in patients with MGD (29). In addition, preoperative parathyroid venous sampling is feasible in cases of persistent or recurrent disease after previous parathyroid surgery when the results of non-invasive imaging studies are negative or discordant (30,31).

Summing up the findings, selection of the operative method for PHPT is important according to the concordance between USG and MIBI scan results. Careful preoperative localisation is important for FP or UE, whereas BNE should be selected in other cases, especially those showing discordance (20,32).

In comparison with BNE, the advantages of FP include reduced operative time, reduced recovery time, less pain and lower complication rate, while the cure rate of FP equals that of BNE. However, BNE is better than FP for detecting MGD, especially in cases of non-localisation and discordant results (8,19). Using FP to avoid unnecessary dissection offers benefits over the use of BNE. Once a surgeon touches the operation field, especially when BNE is performed, a thorough exploration is necessary. Reoperation for recurrent PHPT is associated with high failure rates and complications, especially in cases undergoing BNE (33-35). However, patients who are not cured after FP can undergo a simple second operation that can be performed in an operative field free from adhesions.

The operative method is not an independent predictor of recurrent hyperparathyroidism (36). In this study, the type of operation without IOPTH did not affect recurrence. However, determining the type of operation is an important factor considering the incidence of hyperplasia and multiple lesions in preoperative imaging studies. We believe that if there are no multiple lesions or discordant results, FP or UE is sufficient to achieve a satisfactory cure rate without IOPTH.

The present study has several limitations. IOPTH monitoring was not performed, with PTH being assessed within 24 hours postoperatively. Other limitations include the retrospective nature of the study and a possible selection bias. Further, it was difficult to explain the reason for conversion from FP or UE to BNE based on the retrospective review of medical record data from about 10 years prior.

When it is difficult to apply IOPTH, FP without IOPTH is appropriate in cases showing concordant or single-negative findings on USG and MIBI scan, whereas BNE is recommended in cases of discordance or double-negative results on imaging studies, to prevent recurrence or persistent disease. Appropriate selection of parathyroidectomy methods according to the concordance on USG and MIBI scans might produce good results without any difference in recurrence.

Reporting Checklist: The authors have completed the STROBE reporting checklist. Available at http://dx.doi.org/10.21037/gs-20-611

Conflicts of Interest: All authors have completed the ICMJE uniform disclosure form (available at http://dx.doi.org/10.21037/gs-20-611). The authors have no conflicts of interest to declare.

Ethical Statement: The authors are accountable for all aspects of the work in ensuring that questions related to the accuracy or integrity of any part of the work are appropriately investigated and resolved. The study was conducted in accordance with the Declaration of Helsinki (as revised in 2013). This study was approved by the Institutional Review Board of Asan Medical Center (No. 2018-0594). The need for informed patient consent was waived because of the retrospective nature of the study.