This study aimed to evaluate if multifocality in PTC is associated with a poor prognostic factor such as CLN metastasis, distant metastasis, or tumor recurrence.

We present the following article in accordance with the STROBE reporting checklist (available at http://dx.doi.org/10.21037/gs-20-603).

When recurrence in clinical or biochemical data was suggested, we performed radiologic studies, including neck ultrasonography. Recurrence was confirmed by cytological or histopathological examination. Patients with distant metastasis at the time of initial diagnosis were excluded from the analysis of recurrence.

The study was conducted in accordance with the Declaration of Helsinki (as revised in 2013). The study was approved by the Institutional Review Board of Inje University Sanggye Paik Hospital (No. SGPAIK 2020-09-019) and individual consent for this retrospective analysis was waived.

We presented categorical variables as numbers and percentages and compared using chi-square or Fisher’s exact test. We presented continuous variables as mean ± SD and range. We assessed the relationship between multifocality and other possible prognostic factors using binary logistic regression analysis. We compared recurrence by the Kaplan-Meier method (the log-rank test). The endpoint for the analysis of disease-free survival was a recurrence. We analyzed a prognostic factor for recurrence using Cox’s proportional hazard model (the stepwise forward method). P value of <0.05 was considered significant. We performed all statistical analyses using SPSS (version 25.0; IBM Corp., Armonk, NY, USA). 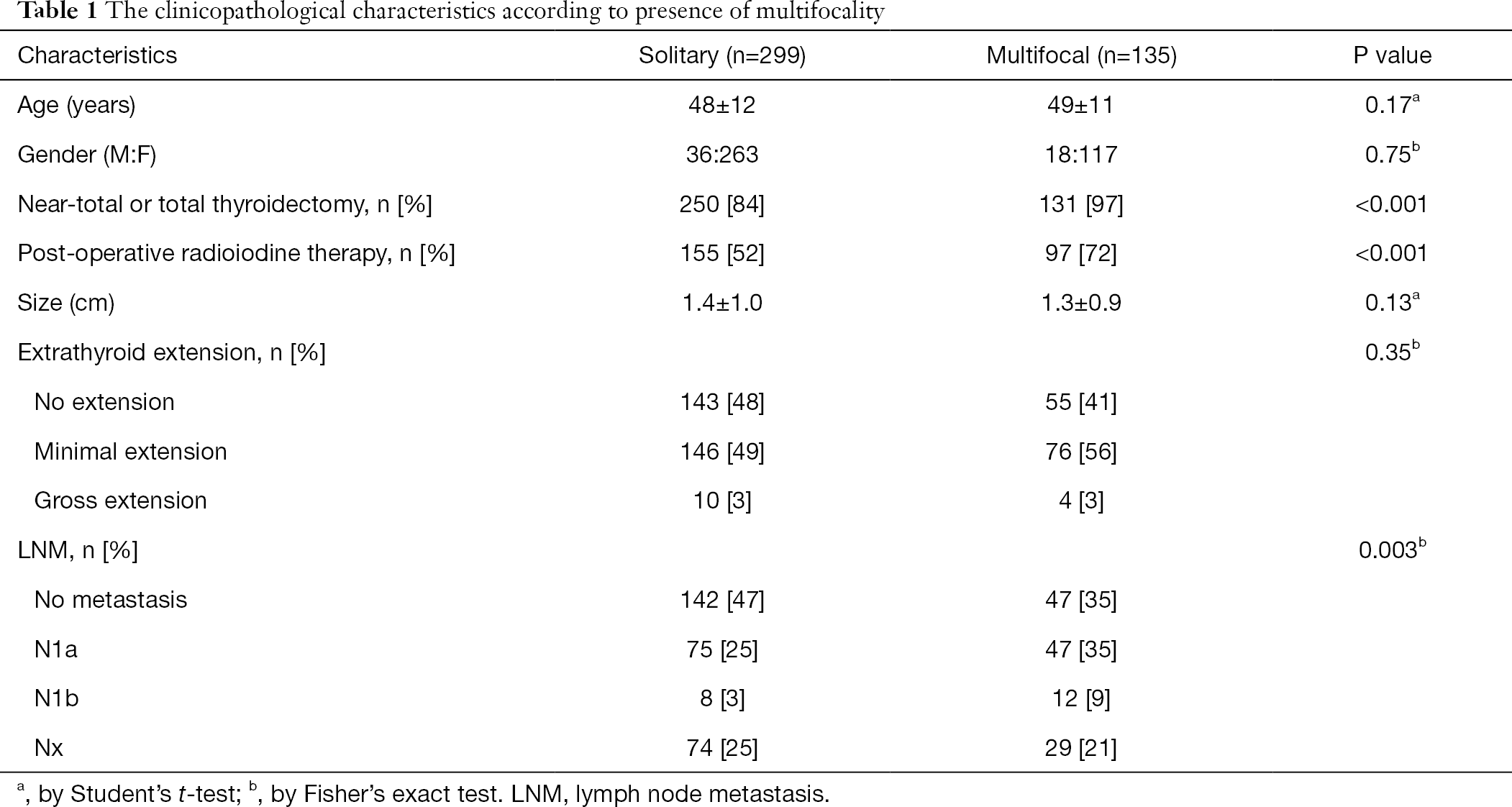 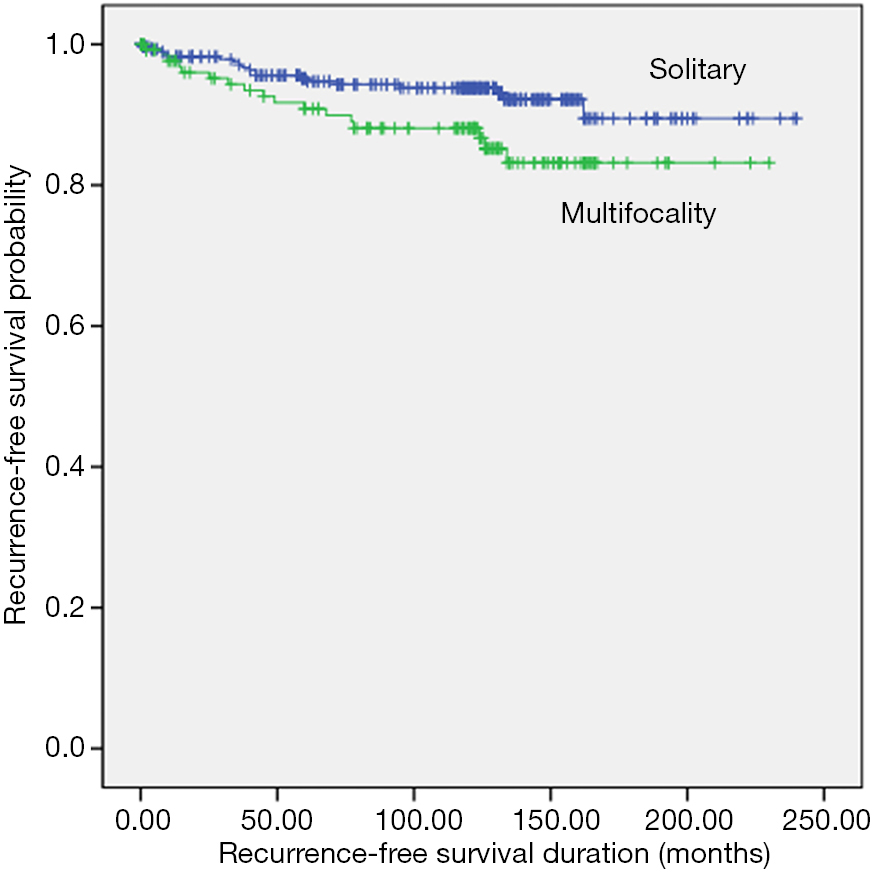 Figure 1 Disease-free survival according to multifocality in 434 patients without distant metastasis at the time of initial diagnosis. The Kaplan-Meier method for recurrence with the log rank test was used for statistical comparisons. 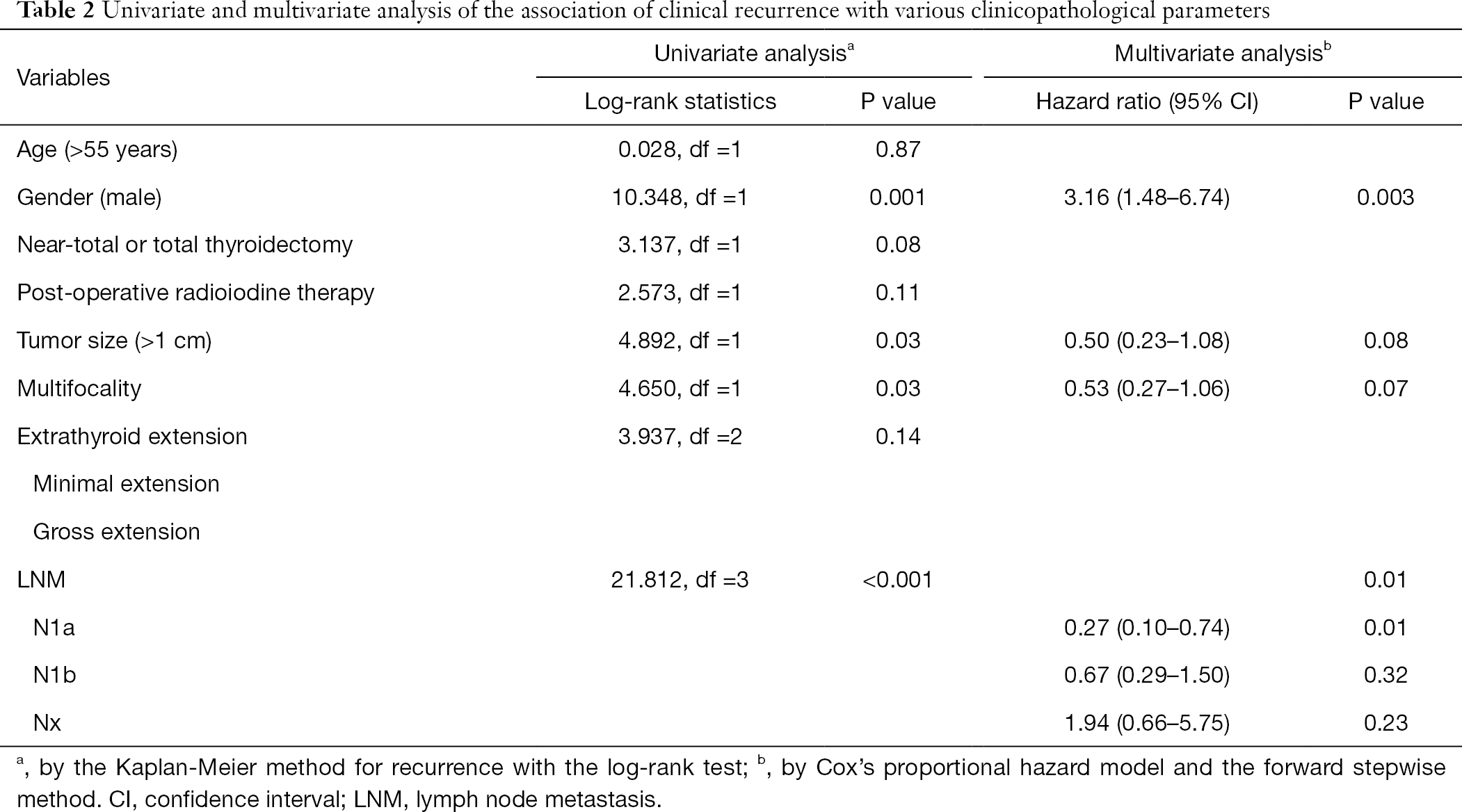 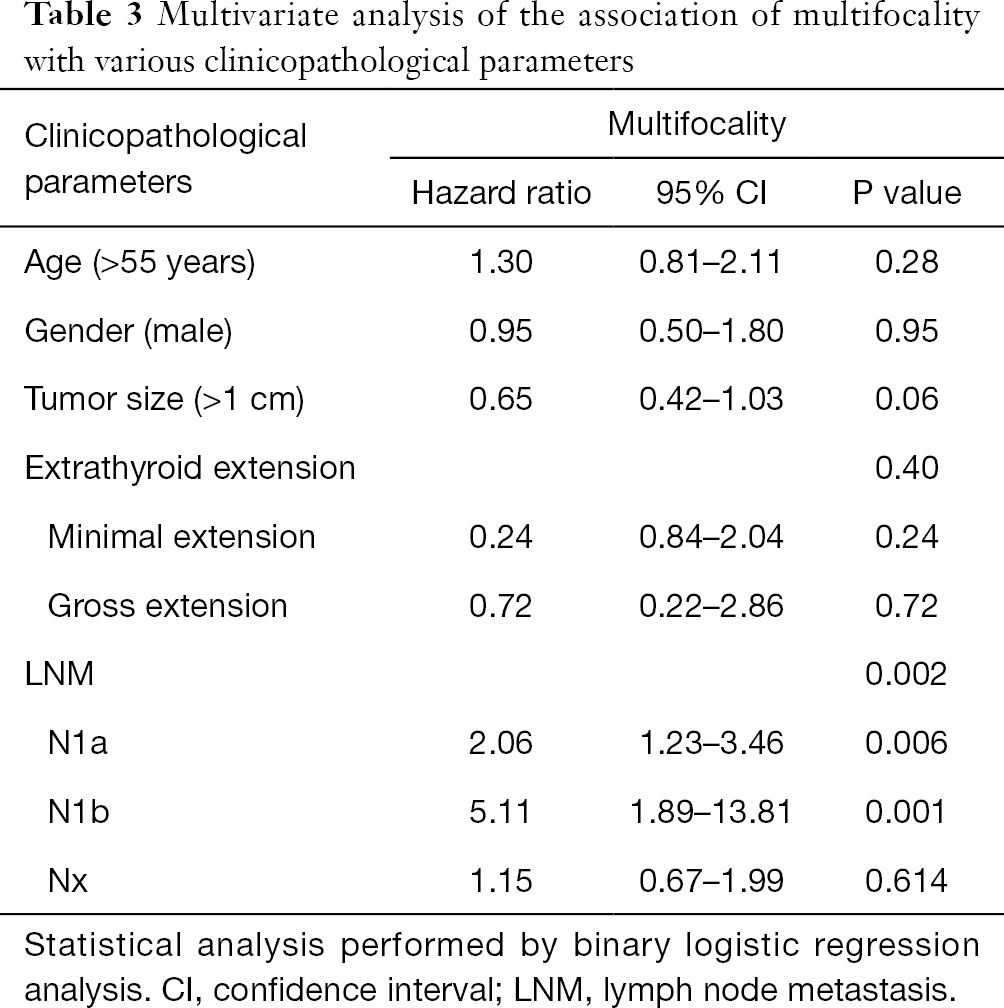 Multifocality has a significant association with CLN metastasis, why cannot it affect recurrence?

First, the degree of multifocality might be different. Although it is defined as multifocality when there are two or more PTCs, the number of tumors was very variable in this study, such as 2, 3, 4, 5, 7, and many multiple tumors. Kim et al. reported that multifocality and the number of tumor lesions were an independent risk factor for recurrence (5). In this study, however, there were rarely many multiple tumors, so the analysis of tumor recurrence based on the number of tumors did not produce significant results (data not shown). The concept of total tumor diameter (TTM) may also be used to overcome this limit. In papillary thyroid microcarcinoma (PTMC), Zhao et al. reported multifocal PTMC with TTM as the sum of the maximal diameter of each tumor >1 cm had a similar risk of LNM, so, they recommended routine central neck dissection in this subgroup (14). But this study did not analyze TTM.

Second, multifocality might be mixed with intraglandular metastases and multicentricity. Either intraglandular metastases from a single PTC or independent neoplastic clones are proven as to how multifocal PTC form (1,2). A lymphatic drainage system can cause intra-thyroidal metastatic spreading. It contains a communicating network of intralobular lymphatic vessels in both lobes and the isthmus enclosed in a capsule (2). A study in the Korean population showed at least 39.5% of the multifocal PTC could be caused to independently arising PTCs rather than to intra-thyroidal spread of single PTC (15). That is, in about 40% of multifocal PTC, multifocality could not be a worse prognostic factor. However, we did not study the origin of multifocal PTC (intrathyroidal spread of single PTC vs. multicentricity).

Fourth, multifocality may be a factor that has nothing to do with a worse prognosis. Poor prognosis may be more strictly related to other carcinogenic genes involved and underlying molecular mechanisms of tumor development and progression. Or it may take too much time to find out the risk of multifocality because PTC has an excellent prognosis. However, this also means that if it occurs at a very young age, it may be a factor that may affect relapse after decades.

This study has some limitations. First, the subject of this study is the heterogeneous population. We analyzed patients with near-total or total thyroidectomy or lobectomy. However, there was no different recurrent rate between a total thyroidectomy group and a lobectomy group (data not sown). Second, Nx accounted for a considerable percentage. LN dissection was performed if macroscopic CLN metastasis was present on the pre-operative imaging such as neck ultrasonography or neck computed tomography or during surgery. LN dissection only based on a macroscopic involvement can be an important bias. However, microscopic subclinical CLN metastases have a much smaller risk of recurrence than clinical macroscopic CLN metastases (18). Even if Nx is a high percentage, it is considered that the likelihood of having an overall prognosis is minimal.

However, this study has some strengths. First, this study is suitable to see the prognosis of PTC progressing slowly by following up for more than 10 years. Second, this data represents the real world by reflecting realistic surgery such as lobectomy, total thyroidectomy, and/or Nx.

Reporting Checklist: The author has completed the STROBE reporting checklist. Available at http://dx.doi.org/10.21037/gs-20-603

Ethical Statement: The author is accountable for all aspects of the work in ensuring that questions related to the accuracy or integrity of any part of the work are appropriately investigated and resolved. The study was conducted in accordance with the Declaration of Helsinki (as revised in 2013). The study was approved by the Institutional Review Board of Inje University Sanggye Paik Hospital (No. SGPAIK 2020-09-019) and individual consent for this retrospective analysis was waived.