Lymphoepithelial carcinoma (LEC) is a rare malignancy characterized by a poorly differentiated carcinoma accompanied by a prominent non-neoplastic lymphoplasmacytic infiltration (1). LEC was often occurred in the nasopharynx, accounting for 40% of all nasopharynx neoplasms (2). Except for the nasopharynx, it could also occur in other site in the head and neck region and previous studies showed LEC represents approximately 5% of head and neck cancers (3,4). Epstein-Barr virus (EBV) infection is considered to be contributing factor for the initiation and development of this disease, so LEC has a unique ethnic predilection for Eskimo, Chinese and Japanese population (5,6). In addition, LEC is also associated with tobacco and alcohol use (7). Similar to other pathological type, the combination of surgery and postoperative radiotherapy is the mainstay treatment paradigm for LEC patients (8). Due to significant lymphocytic infiltration in LEC tissue which could induce a strong anti-tumor immune response, the previous studies reported that LEC patients often had good prognosis (8,9).

LEC of salivary gland (LEC-SG) is exceedingly rare and only comprises 0.4% of salivary malignancies (10). Due to its rarity, most knowledge and information about this disease comes from case report or case series. The clinicopathological characteristics and prognosis of LEC-SG patients has not fully defined. To better understand this rare malignancy, we conducted a population-based study to present the clinicopathological characteristics, and further determine the prognostic factors using the data of LEC-SG patients registered in Surveillance, Epidemiology, and End Results (SEER) database between 1975 to 2016. We present the following article in accordance with the STROBES reporting checklist (available at http://dx.doi.org/10.21037/gs-20-464).

The database ‘SEER 18 Regs Custom Data with additional treatment fields, Nov 2018 Sub (1975-2016)’ was searched. We accessed the SEER database with the dedicated software SEER*Stat (http://seer.cancer.gov/seerstat) and obtained all available cases of primary LEC located in salivary glands, with ICD-O-3 histology coding (ICD-O-3:8310/3) between 1975 and 2016. In each case, age at diagnosis, sex, ethnicity, TNM-AJCC stage, SEER historic stage, the use of radiotherapy/chemotherapy/surgery were recorded. The overall survival time was also isolated from the SEER database. The study was conducted in accordance with the Declaration of Helsinki (as revised in 2013).

The clinicopathological characteristics were summarized using counts and percentages. Student’s t-tests and chi-square tests were used to evaluate the difference in continuous data and categorical data, respectively. The Kaplan-Meier Curves were drawn, survival analysis was assessed by Log-Rank test. The association of each characteristic with prognosis was evaluated using univariate and multivariate Cox regression models. MedCalc statistical software was used for all statistical analysis (Mariakerke, Belgium). A P value less than 0.05 was considered statistically significant.

As shown in Figure 1A, the median OS (mOS) of all 179 LEC-SG patients was 206 months (95% CI: 143–262 months), with the 1-, 5-, 10- and 20-year survival rates of 91.0%, 80.2%, 66.4%, and 37.6%, respectively. Patients with distant stage or regional stage (SEER historic stage) had relatively shorter overall survival time than those with localized stage, but no significantly statistical difference could be observed (P=0.12, Figure 1B). According to TNM-AJCC stage classification, patients with advanced stage (III/IV) had significantly shorter overall survival time than those with early stage (I/II) (P<0.05, Figure 1C). 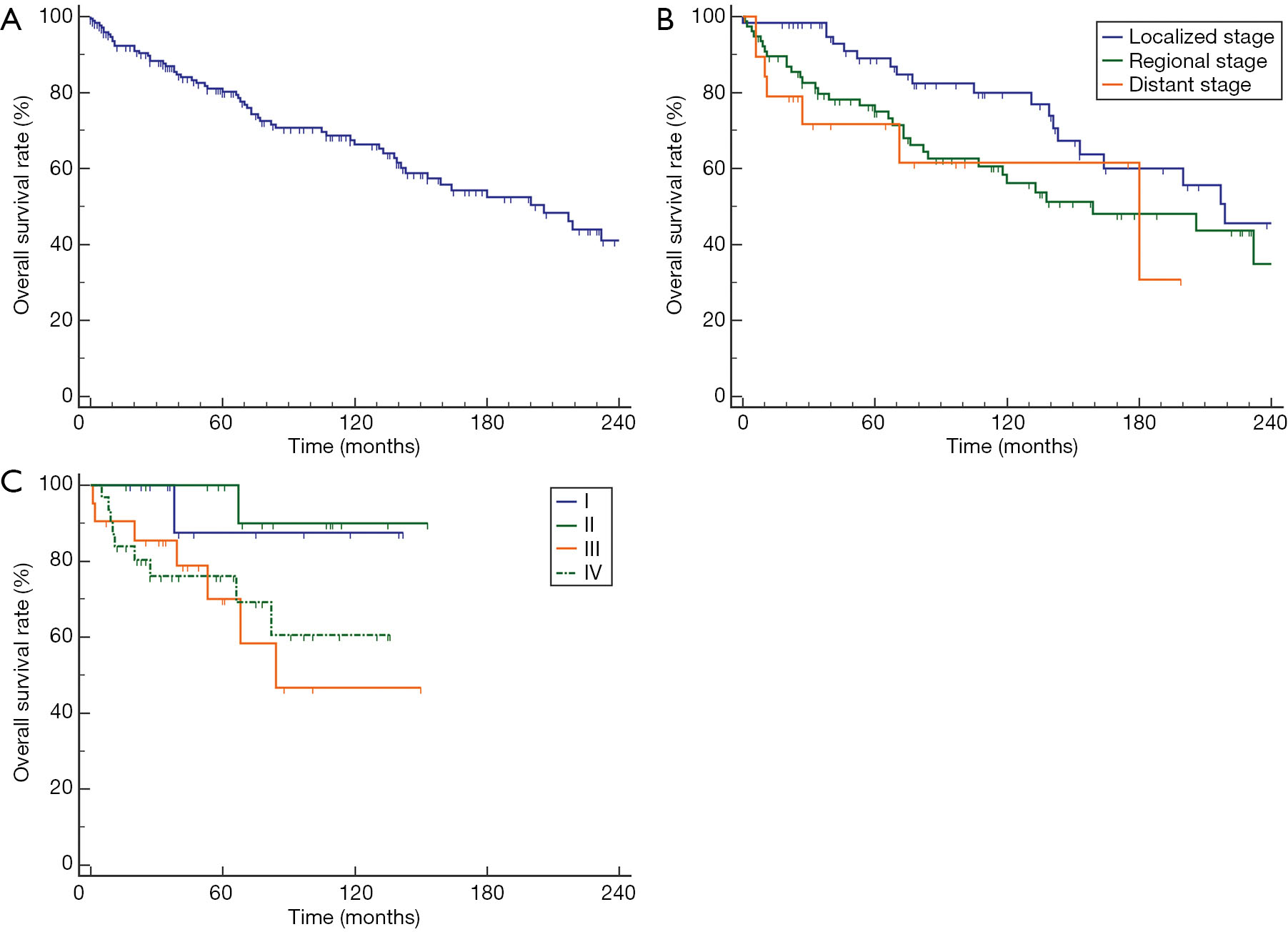 The stratification analysis showed that LEC-SG patients who were non-white/black ethnicity had significantly better prognosis than white/black individuals (P<0.05, Figure 2A). The prognoses of LEC-SG patients became much worse with increasing age, increasing tumor invasion and lymph node metastases (P<0.01, Figure 2B,C,D). Only 2 patients with distant metastases could survive more than 25 months. Divorced or widowed patient had worse prognosis than married or unmarried patients (P<0.01). In addition, the results showed no significant association of other characteristics and prognosis including gender (P=0.22), laterality (P=0.29), pathological grade (P=0.60), primary site (P=0.12). 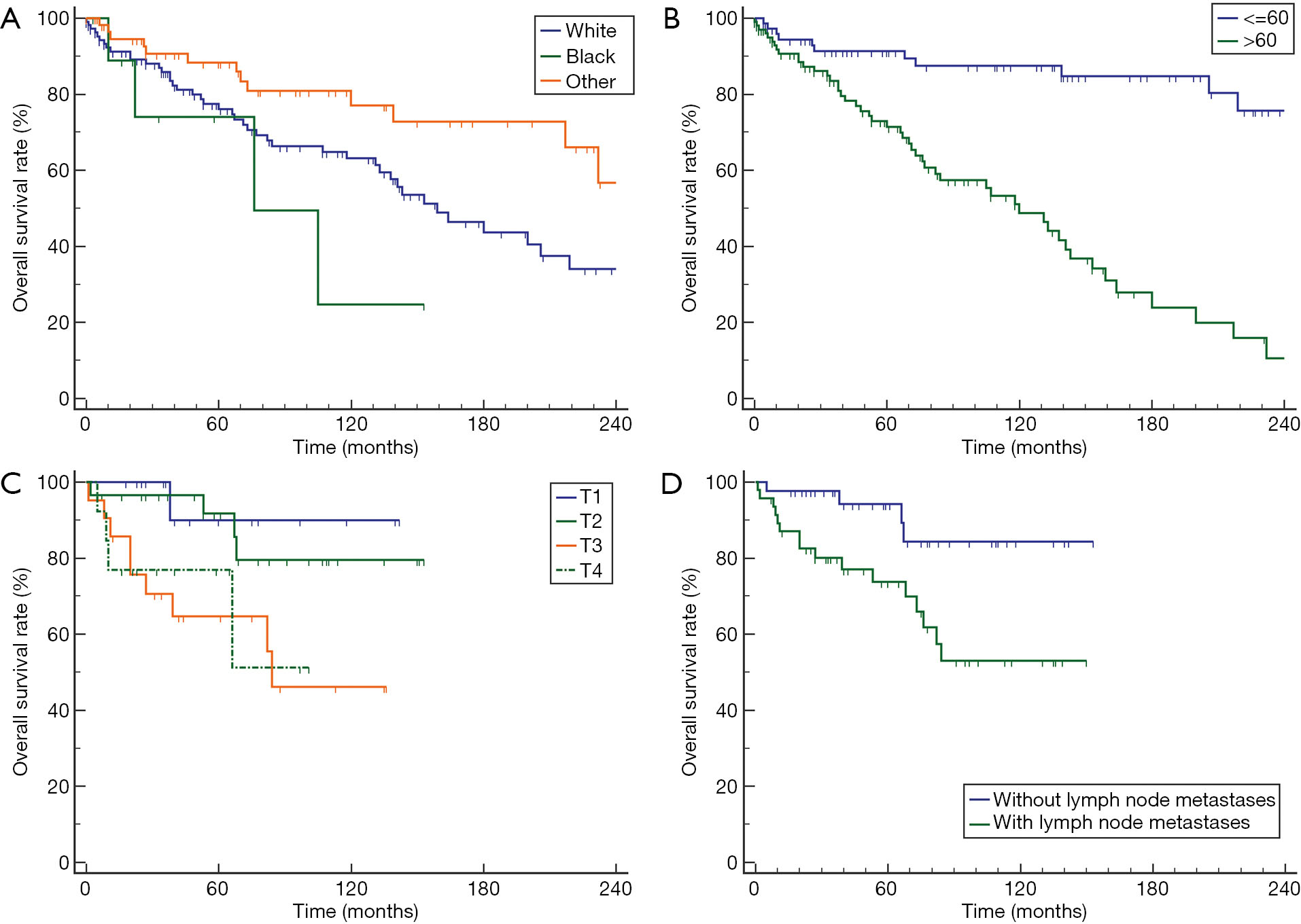 Effect of treatment regimen on prognosis

Figure 3 showed the effect of different treatment regimens on prognosis. Patients received surgical resection had much longer overall survival time than those who did not received surgery (mOS: 219 vs. 68 months, P<0.01). The use of radiotherapy could also prolong the overall survival of LEC-SG patients, but without significantly statistical difference (mOS: 231 vs. 138 months, P=0.11; Figure 3B). Meanwhile, there was no statistically significant difference in overall survival between LEC-SG patients with and without chemotherapy (P=0.18; Figure 3C). In addition, the combination of surgery and radiotherapy also could prolong the overall survival than those with surgery alone. Radiotherapy after surgery could improve long-term survival and decrease the risk of death among patients who survive exceed 10 year after surgery (232 vs. 143 months, P=0.25; Figure 3D). 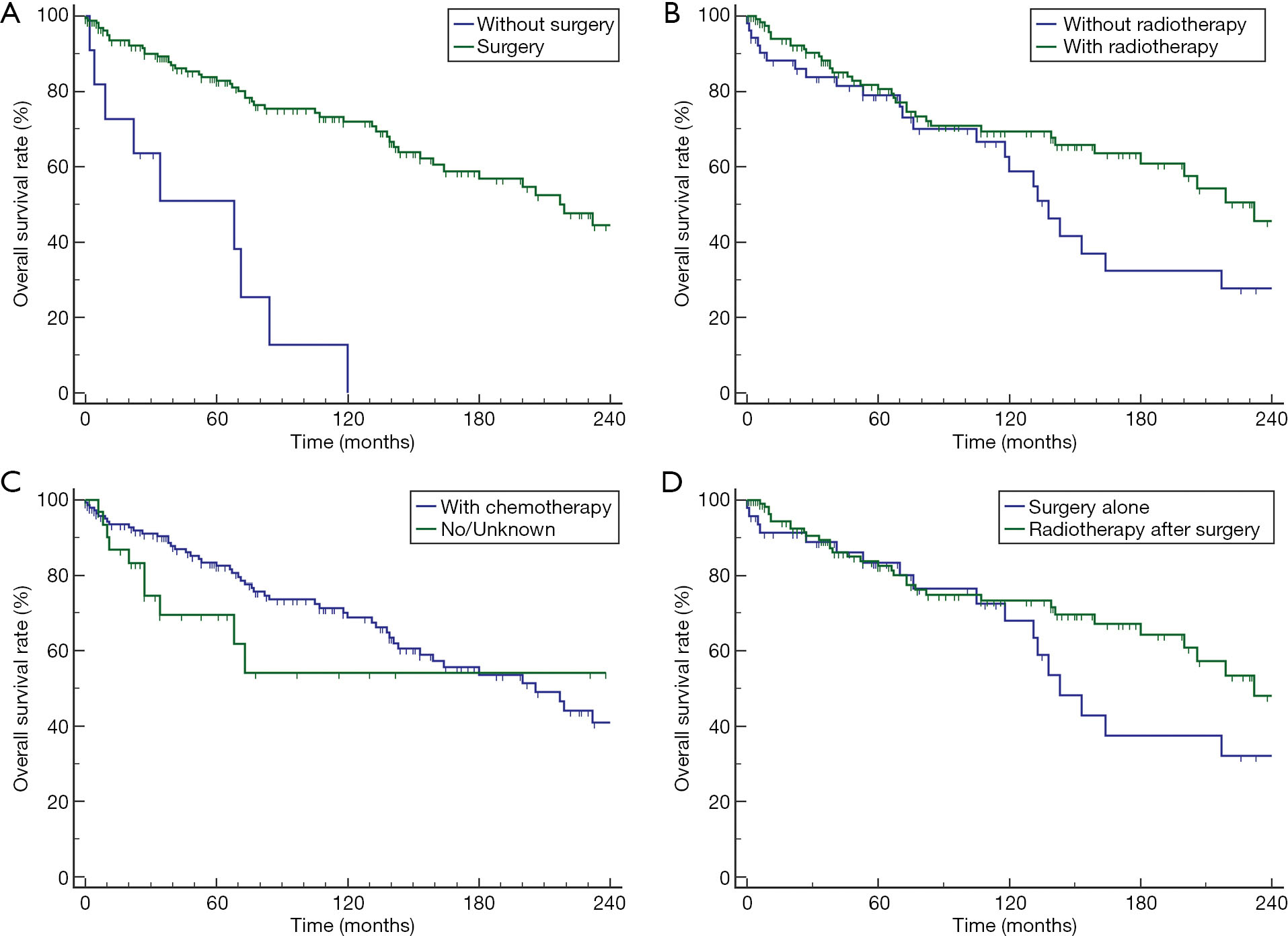 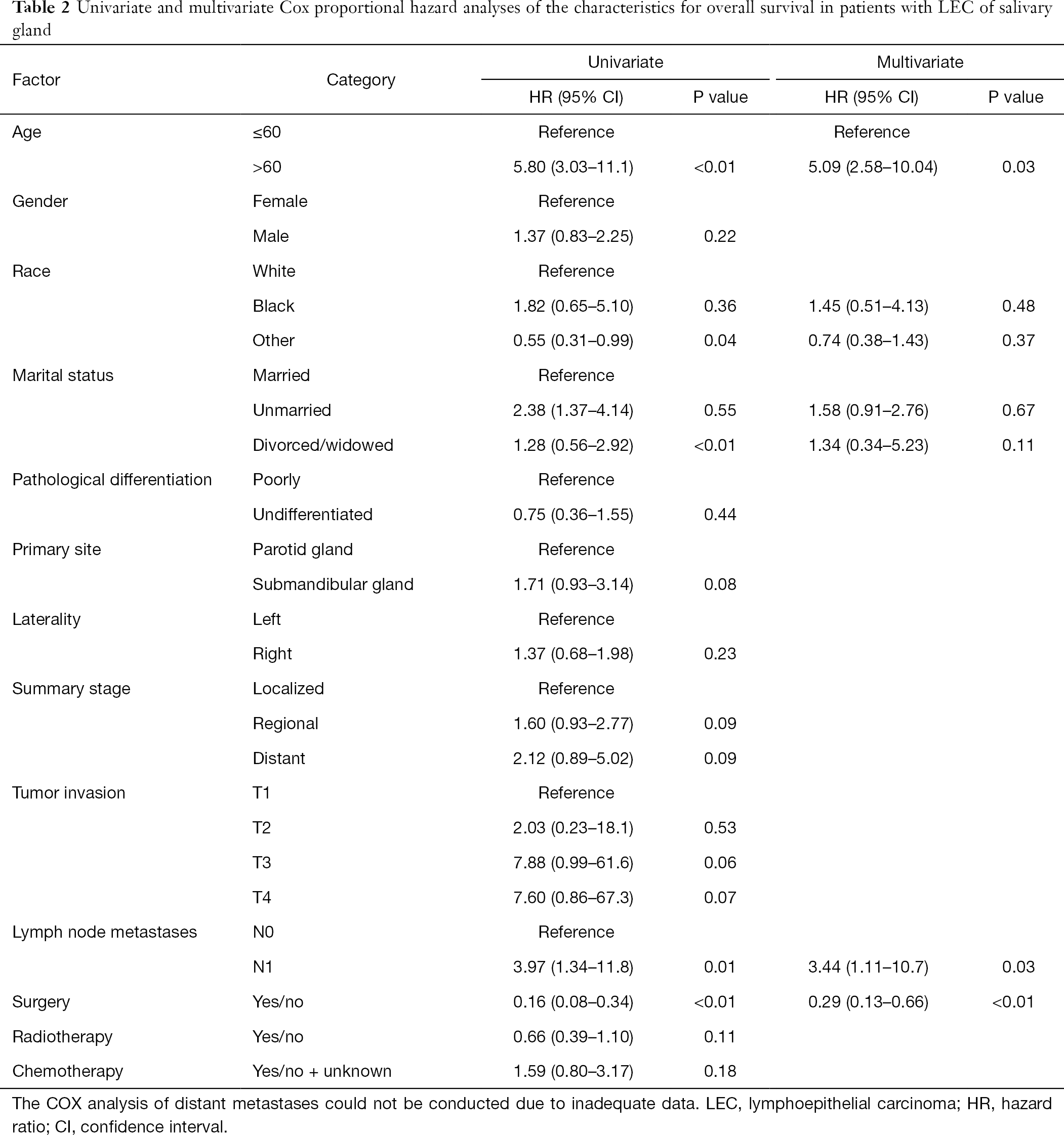 The purpose of the present study was to elucidate the clinicopathological characteristics and prognosis of LEC-SG patients using the data of 179 patients from SEER database. The results showed that LEC of salivary gland had good prognosis with a mOS of 206 months, and old age, lymph node metastases as well as the use of surgery were independent prognostic factors.

LEC of salivary gland is exceedingly rare, it only comprises 0.4% of salivary malignancies in Western country. Chinese patients have a relatively higher incidence of LEC, accounting for approximately 5–9.7% of all salivary gland tumors (11,12). The present study showed that LEC of salivary gland is much more frequent in the non-white/black population than white or black population. Due to the invariable relationship between EBV and LEC, this regional difference in the occurrence of this disease may be attributed to cancer-related virus infection (1,7). For example, several previous studies have reported a close correlation of EBV infection with LEC development in Southeast Asia, Greenland, and Alaska (8,13,14). EBV positivity was also observed in LEC-SG patients from high incidence regions. For example, Ma found that EBV-DNA was positive in 43.9% (18/41) of Chinese LEC patients at initial diagnosis (8). The recent data demonstrated that 85.0% of lesions were located in parotid gland, which is in consistent with previous data (15,16). Previous studies have some controversial results about the gender distribution of this disease. Wang YL, et al. reported a predominance of men with a female-to-male ratio of 1:1.75 among 11 cases with LEC of salivary gland (12). Another study including 103 cases reported this disease predominantly occurs in women, with a male-female ratio of 1:1.94 (16). Similar to Ma H’s study, we also observed that 52% patients were women, with a female-to-male ratio of 1.08:1 (8). Several studies in Chinese population reported that the average age of LEC of salivary gland was around 50 years (49.4–51.8 years) (8,11,16), but the age of patients in the present cohort was older than previous studies that the LEC-SG patients had an average age of 60.2 years, with 102 cases older than 60 years.

Among LEC-SG patients, several studies have reported nonspecific symptoms could lead to a delay in a definitive diagnosis of this malignancy, with a median delay period of 12 months (7 days to 20 years) (8,11,16). Consequently, a majority of patients with LEC of salivary gland present locally or regionally advanced disease at diagnosis. In Ma H’ study, 59.4% of patients were categorized into advanced stage (III/IV), and 43.5% of patients had lymph node metastases. In our study, the data revealed that 58.9% of patients were categorized into regional or distant stage at initial diagnosis, and 52.8% of patients had lymph node metastases. Only 2 cases in the present cohort had distant organ metastases, one case had bone metastases, the other one had no information about distant metastases.

In conclusion, the results revealed that LEC-SG patients had a favorable prognosis and old age, lymph node metastases as well as the use of surgery were significantly associated with prognosis. Although there are several limitations similar to other analysis based on the SEER database including inadequate information, retrospective nature, small sample size, the present study is the largest series of cases with LEC-SG and could help the physician more deeply understand this malignancy.

Reporting Checklist: The authors have completed the STROBE reporting checklist. Available at http://dx.doi.org/10.21037/gs-20-464

Conflicts of Interest: All authors have completed the ICMJE uniform disclosure form (available at http://dx.doi.org/10.21037/gs-20-464). The authors have no conflicts of interest to declare.

Ethical Statement: The authors are accountable for all aspects of the work in ensuring that questions related to the accuracy or integrity of any part of the work are appropriately investigated and resolved. The study was conducted in accordance with the Declaration of Helsinki (as revised in 2013).