Breast cancer is a malignant disease with the highest prevalence and the leading cause of cancer death in women. Approximately 2 million women were newly diagnosed with breast cancer, and 630,000 died from breast cancer in 2018 worldwide (1). Patients with early breast cancer, especially T1–2 (tumor size ≤5 cm) and negative axillary lymph nodes (N0), were increasingly diagnosed due to the early detection by mammographic screening (2). In the current clinical practice, breast-conserving surgery (BCS) + adjuvant radiotherapy (RT) or mastectomy (MAST) was the optional locoregional management for patients with early breast cancer (3).

The traditional American Joint Committee on Cancer (AJCC) staging system has been widely used for prognosis predicting and treatment decision-making in breast cancer, which was based on anatomic information including tumor size, lymph node status, and distant metastasis (4). Considering the remarkable progress and importance of biologic markers such as histological grade, estrogen receptor (ER), progesterone receptor (PR), and human epidermal growth factor-2 (HER2) in breast cancer, the 8th AJCC staging system incorporated indicators mentioned above to better distinguish the prognosis of breast cancer patients (5,6). However, the effect of the 8th AJCC staging system on surgical decision-making remains unclear in breast cancer. Previous trials have demonstrated BCS + RT achieved at least equivalent survival compared with MAST in patients with T1-2N0 breast cancer based on the 7th AJCC staging criterion (7-14). However, whether the results were still applicable based on the new staging system was not well elaborated.

Several studies have shown a higher local recurrence rate and inferior overall survival in patients aged <50 years compared to those aged ≥50 years (15,16). In the current clinical practice, approximately 50–63% of the patients aged <50 years opted for the MAST procedure (17,18). However, the impact of surgical approaches on the survival of breast cancer patients with a younger age has yielded conflicting results (19,20). The study from Laurberg et al. showed that younger patients with BCS + RT had higher local recurrence risk and mortality than those with MAST (19), while comparable survival was found between BCS + RT and MAST in a systematic meta-analysis (20). Therefore, our study aimed to evaluate the prognostic value and the role in treatment decision-making (BCS + RT or MAST) of the 8th AJCC staging system compared with the 7th AJCC staging system among patients with early breast cancer aged <50 years.

We present the following article in accordance with the STROBE reporting checklist (available at http://dx.doi.org/10.21037/gs-20-587).

The SEER database was utilized to extract the patient listing between 2010 and 2014. The SEER database collects data from 18 national cancer registries and captures 30% of the population in the United States, which consists of detailed information about demographics, tumor characteristics, intervention, and survival status in cancer patients (21).

Eligible patients were defined using the following criteria: (I) women with a definite pathological diagnosis of primary non-metastatic breast cancer and aged less than 50 years; (II) patients with stage T1-2N0M0 cancers; (III) knowing the status of ER, PR, HER2, and tumor grade; (IV) receiving BCS followed by postoperative RT or MAST alone. Criteria for study exclusions were as follows: (I) without a definite pathological diagnosis; (II) not receiving surgery procedures, receiving BCS without following RT, or receiving MAST followed by RT. The AJCC staging systems were based on the 7th edition of the AJCC anatomical staging and the 8th edition of the AJCC pathological prognostic staging. This study was exempted from the approval of the Institutional Review Board of the First Affiliated Hospital of Xiamen University due to the anonymous information in the SEER database. The study was conducted in accordance with the Declaration of Helsinki (as revised in 2013).

We collected the information of the following variables: age, race/ethnicity, tumor size, histological grade, hormone receptor status, HER2 status, surgery procedures, and RT administration. Breast cancer-specific survival (BCSS) was used as the primary endpoint in this study, which was measured from the date of diagnosis to the date of death from breast cancer.

All of the statistical analyses were conducted using the IBM SPSS Statistics (Version 22.0; IBM Corp., New York, USA). Chi-square test was performed to analyze the clinicopathological characteristics, including age, race/ethnicity, tumor size, histological grade, hormone receptor status, and HER2 status between BCS + RT and MAST groups. The receiver operating characteristics (ROC) curve was used to assess the discriminatory ability between the 7th and the 8th AJCC staging system in predicting survival outcome. Kaplan-Meier method was applied to draw survival curves to estimate the crude trend of BCSS. Multivariate Cox proportional hazards models were used to determine the potential confounding predictors for BCSS. A P value <0.05 (two-tail) was considered statistically significant. 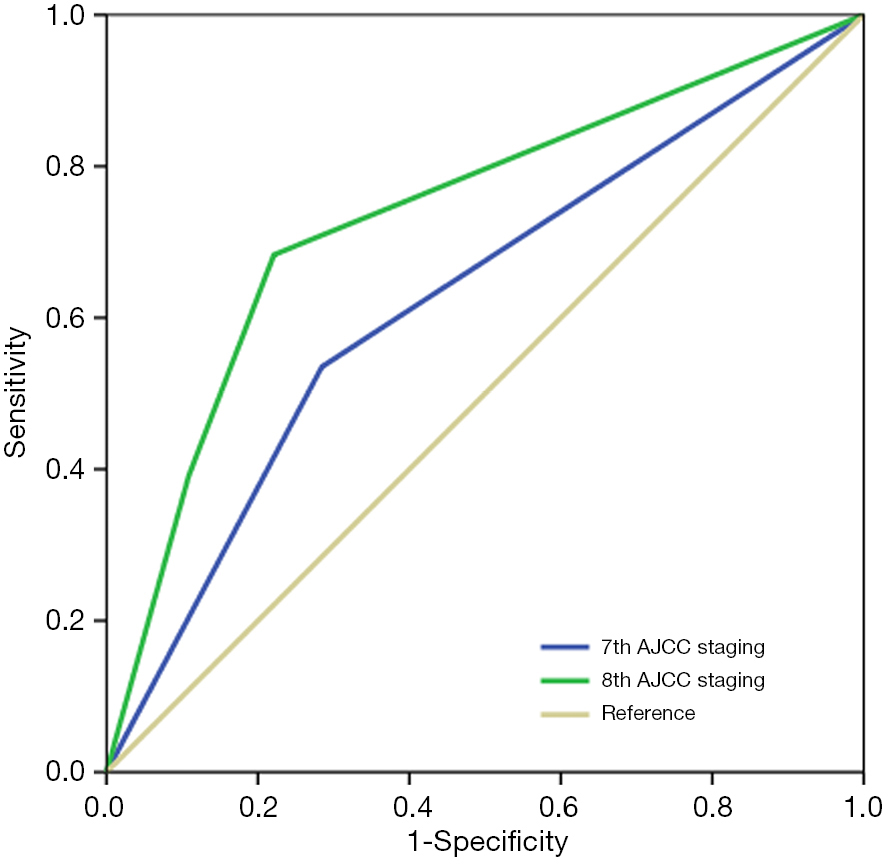 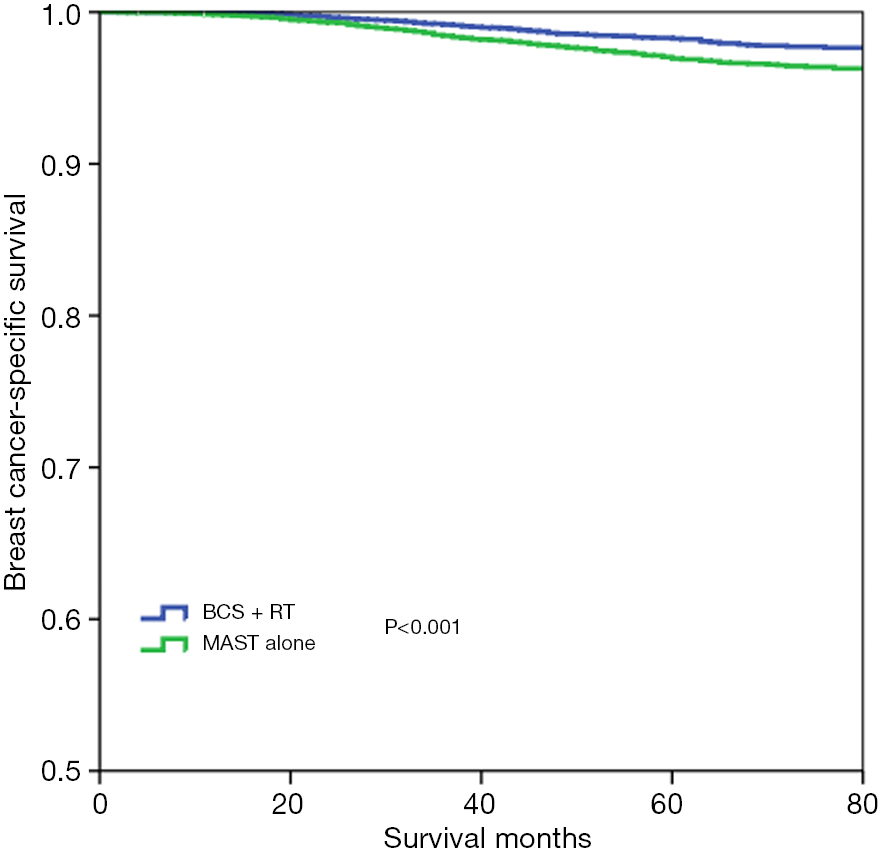 Figure 3 Survival curves between breast-conserving surgery (BCS) + radiotherapy (RT) and mastectomy (MAST) groups in stage IA (A) and IIA (B) in the 7th American Joint Committee on Cancer staging system. 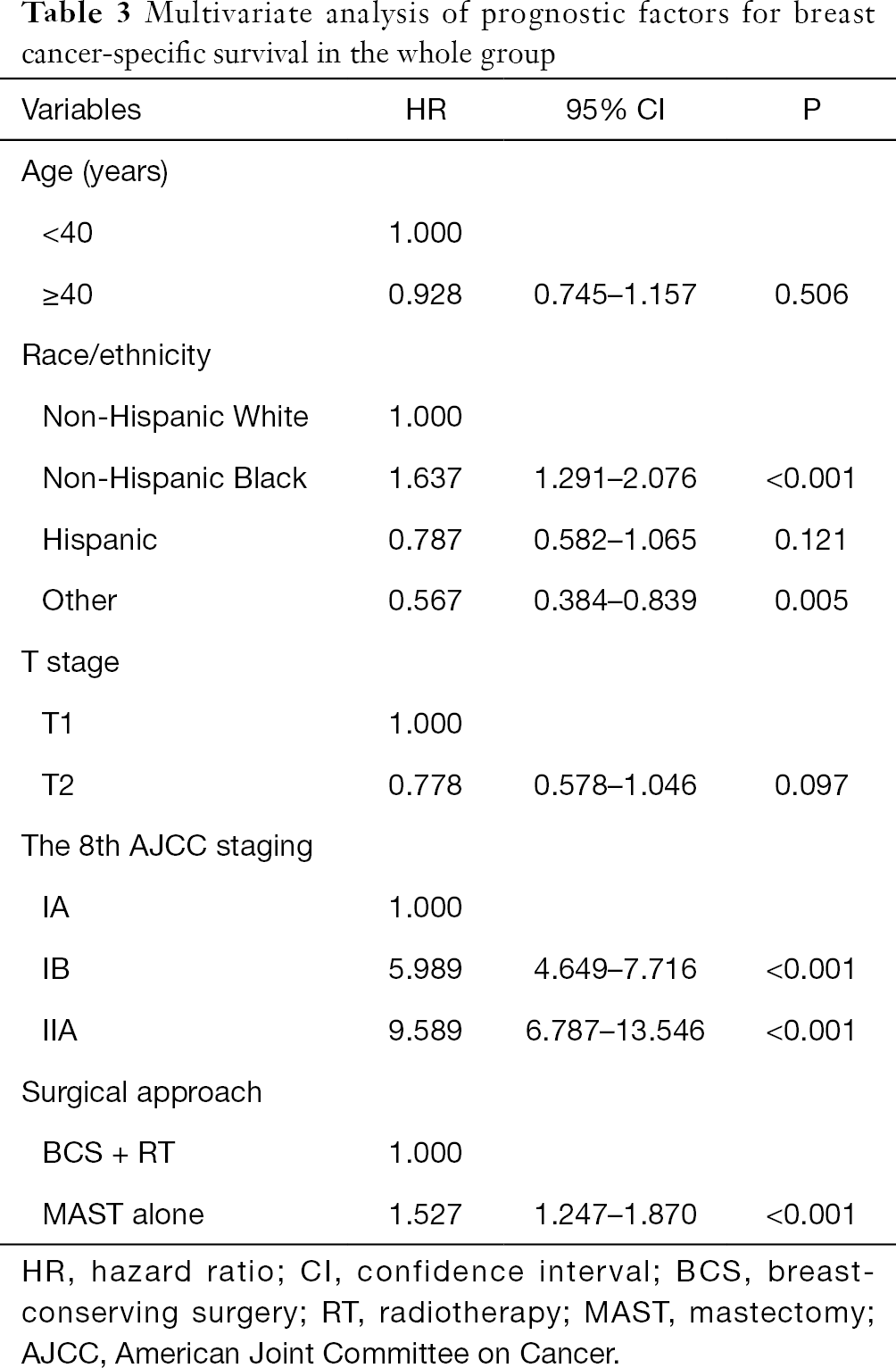 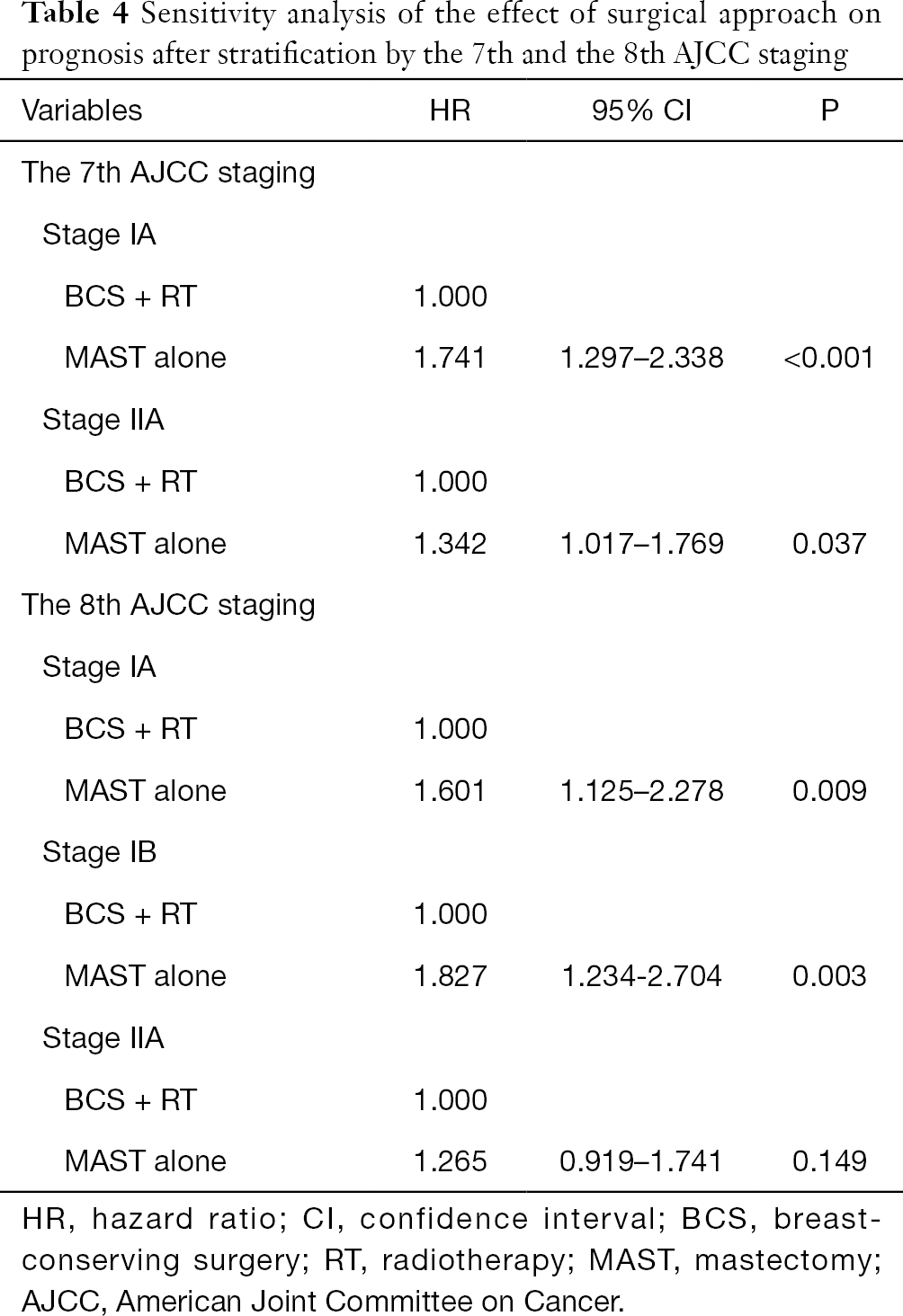 In this study, we aimed to assess the prognostic and predictive value of the 8th AJCC staging system in patients with T1-2N0 breast cancer aged <50 years, and our findings demonstrated that the new pathological prognostic staging system had a better staging system compared to the conventional anatomic system. In addition, BCS + RT achieved better 5-year BCSS than MAST in stage IA and stage IB diseases, while comparable BCSS found between the two treatment arms in stage IIA disease. Our study was the first to assess the effect of surgical approach selection using the 8th pathological staging criterion in young breast cancer with T1-2N0 disease.

The further understanding of biomarkers of breast cancer is closely relationship to treatment decision-making (22-24). The 8th edition of the AJCC pathological staging system, which incorporated anatomical information, pathological finding, and biological markers (ER, PR, and HER2 status), was initially established using the information of 305,519 patients from the National Cancer Database in 2018 (25). Several studies have validated the superior prognostic accuracy of the 8th AJCC pathological staging compared to the 7th anatomical staging (6,26,27). However, limited studies focused on the effect of the 8th AJCC manual in patients with stage T1-2N0 disease. In this study with a large sample size (n=22,640), approximately 25% of the patients upstaged or downstaged from the 7th AJCC staging to the 8th AJCC staging, and the 8th AJCC staging system performed well discriminatory ability in concordance with the stage. Therefore, the new AJCC staging criterion could better guide the individualized management and prognosis evaluation in T1-2N0 patients.

The decision of surgical procedure in patients with T1-2N0 breast cancer has been well elaborated in the 7th AJCC staging system, and BCS + RT had at least comparable survival compared to MAST in patients with early breast cancer (8,10,11,13,14). However, the surgical selection building upon the 8th AJCC manual was unclear. Almost all patients who established the 8th AJCC manual received systemic therapy. Thus, the effect of locoregional treatment should be validated before it was applied to clinical practice. In our study, BCS + RT achieved a better BCSS rate than MAST in T1-2N0 patients aged <50 years using traditional anatomical staging. When using the 8th pathological staging, BCS + RT had better BCSS compared with MAST in stage IA and IB diseases, while comparable survival was found in stage IIA diseases between the two treatment arms. Therefore, patients with stage IIA disease should be individually managed when applying an updated staging system. For pregnancy-associated breast cancer, claustrophobia patients, patients refusing breast radiation or unable to tolerate RT, and institutions without RT equipment, MAST could be an optional choice for patients with stage IIA disease (28).

Among the patients in this study, 46.2% of them received the BCS + RT procedure, which was significantly lower than previous studies in patients of all ages (56.3–57.3%) (29,30). We demonstrated that patients with adverse prognostic factors such as large tumor size, ER/PR negative, and HER2 positive, were associated with increased rates of MAST, and the result was similar to prior studies (29,30). Although the receipt of BCS had an upward trend over time (29), the possibility of the receipt of BCS was still lower than MAST. Several studies have suggested that patients undergoing BCS have more advantages than patients undergoing MAST, including faster recovery (31), better compliance for postoperative medical surveillance and follow-up by surgeon teams (32), better sexual well-being and life satisfaction (33,34). Therefore, according to our findings, BCS + RT was the optimal local treatment for breast cancer patients at a young age.

Several potential limitations should be acknowledged in this study. Firstly, the data in our study was extracted from the SEER database, and selection biases in the retrospective study were inevitable. Secondly, the SEER database lacks sufficient details about systemic therapy (chemotherapy protocol, endocrine therapy, and anti-HER2 targeted therapies), radiation therapy (RT technique, RT dose, and target volume). In addition, the patterns of locoregional recurrence and distant metastasis were also not recorded in the SEER database. Finally, the follow-up period might be relatively short in this study due to the better survival in patients with T1-2N0 breast cancer. The primary strength of our study was that we detailedly verify the effect of BCS + RT and MAST with a large sample size of 22,640 patients in early breast cancer based on the 8th AJCC staging system.

In conclusion, our study demonstrated that the 8th AJCC pathological staging system had better prognostic accuracy than the 7th anatomical staging. In addition, in terms of surgical decision-making, BCS + RT was still the standard treatment for stage IA and IB, while it was optional management in stage IIA in patients with T1-2N0 breast cancer aged <50 years in the basis of the 8th AJCC staging.

The authors acknowledge the efforts of the Surveillance, Epidemiology, and End Results (SEER) Program tumor registries in the creation of the SEER database.

Funding: This work was partly supported by the National Natural Science Foundation of China (No. 81872459) and the Commission Young and Middle-aged Talents Training Project of Fujian Health Commission (No. 2019-ZQNB-25).

Reporting Checklist: The authors have completed the STROBE reporting checklist. Available at http://dx.doi.org/10.21037/gs-20-587

Conflicts of Interest: All authors have completed the ICMJE uniform disclosure form (available at http://dx.doi.org/10.21037/gs-20-587). The authors have no conflicts of interest to declare.

Ethical Statement: The authors are accountable for all aspects of the work in ensuring that questions related to the accuracy or integrity of any part of the work are appropriately investigated and resolved. The approval process of Institutional Review Board was waived because of the de-identified information of the patients included in the SEER. The study was conducted in accordance with the Declaration of Helsinki (as revised in 2013).