Implant-based breast reconstruction is the most frequently utilized surgical technique. The breast volume can be adjusted based on remained breast tissue and volume of inserted implant. Usually, the implant is inserted underneath the pectoralis muscle. However, a displacement or rippling of the implant can occur, because the chest wall and pectoralis muscle has strong tension which makes limited space between them (1). In addition, the capsular contracture after radiotherapy sometimes may result in respiratory discomfort (2,3).

Acellular dermal matrix (ADM) has been used to cover and support the inferior aspect of the breast pocket, and prevent capsular contracture or dislocation of the implant. Although ADM allowed the reconstructed breast to maintain its natural contour and shape (4-7), it has some complications, such as infection and postoperative seroma (8-14). There are some reports that autologous tissue has been used for full muscle coverage instead of an ADM (15). When implant-based breast reconstruction is performed with a latissimus dorsi (LD) muscle flap, the additional coverage by the LD muscle will thicken the overlying flap which might be positive to the appearance and feeling of the breast.

All data were collected and analyzed retrospectively, and included clinicopathologic characteristics, volumes of the resected breast and implant, treatment modalities, complications, and cosmetic outcomes. The questionnaire survey for cosmetic outcomes was conducted by patients and physicians after 4 weeks from radiotherapy based on a 4-point scoring system, which included the following items: overall satisfaction, breast symmetry, shape, softness, and tension with movement.

Both groups underwent nipple sparing mastectomy with implant-based breast reconstruction. After the breast tumor was removed with safety margin, the pectoralis major muscle was dissected from the chest wall from the lateral to the medial and inferior margins of the muscle. A triangular window composed of the lateral margins of pectoralis, anterior serratus muscle, and the lateral side of inframammary line was covered with the ADM or LD muscle onlay patch (Figure 1). In the ADM group, the implant was inserted into the breast pocket and the window was covered with ADM (Surgimend®, TEI Biosciences Inc. Boston, MA, USA). And in the LD onlay patch group, the window was enveloped with the LD muscle after an appropriate volume of the implant was positioned. The extent of the patch is decided after considering the volume of the breast prosthesis. Then, anchoring sutures were inserted to fix the muscle and prevent displacement of the implant. Anchoring sutures should be inserted at 1-cm intervals to prevent the escape of the implant and to avoid damaging the vasculature of the LD muscle. These sutures should avoid the vascular structures of the LD muscle, because damage to the vascularity may cause necrosis or stiffness of the flap (Figure 2). 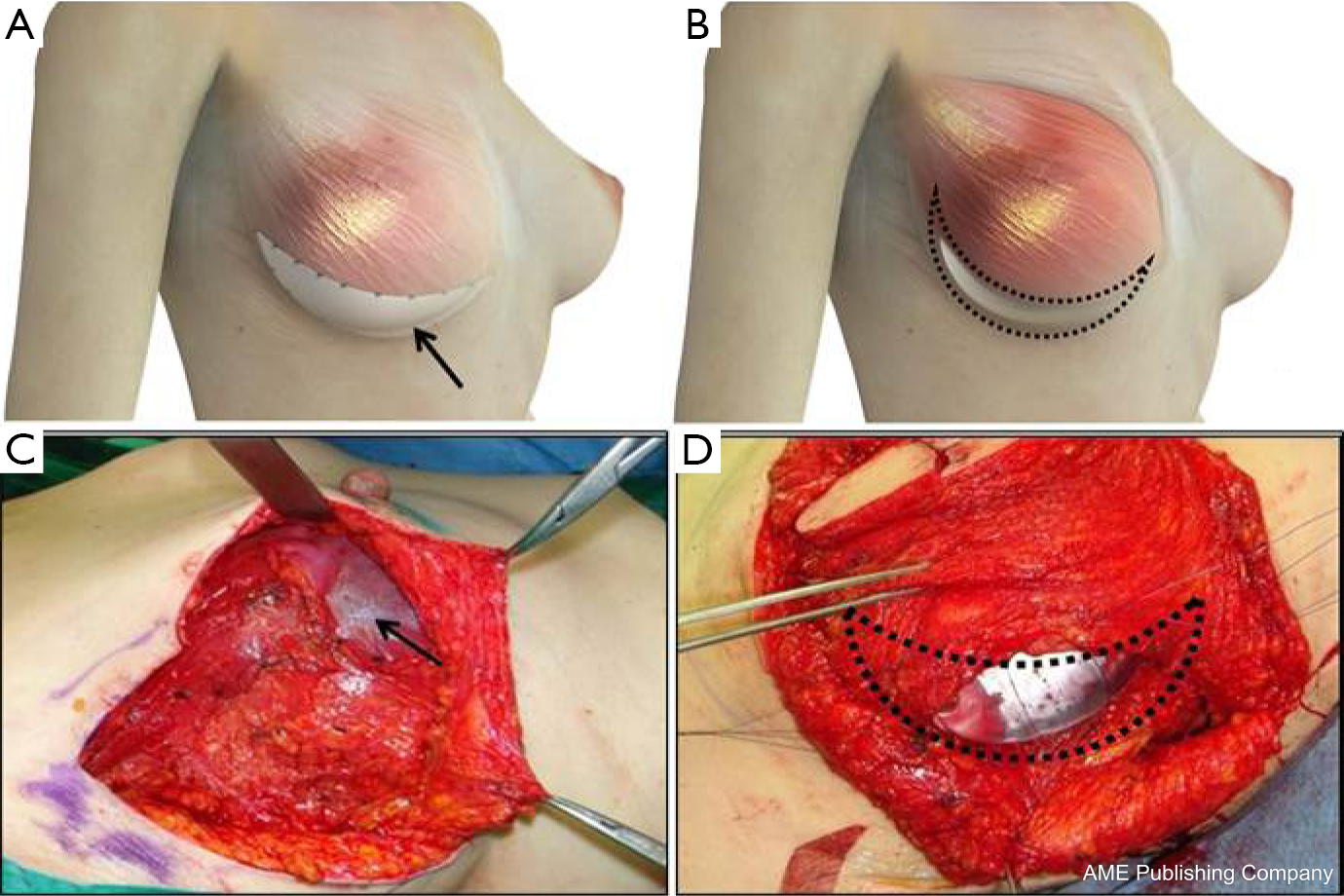 Figure 2 Transverse views of a completed implant-based breast reconstruction. (A) An acellular dermal matrix (black arrow) is placed between the inferior border of pectoralis muscle and the inframammary line; (B) the latissimus dorsi muscle onlay patch (dot arrow) is fixed with anchoring sutures on the inferior border of the pectoralis muscle and the chest wall at the inframammary line.

Clinical characteristics are listed in Table 1; there were statistically significant differences between groups in terms of implant volume (P=0.022), surgical time (P=0.003), and hospital stay (P=0.010). However, the mean volume loss of the breast and incidence of complications were not statistically different between groups. 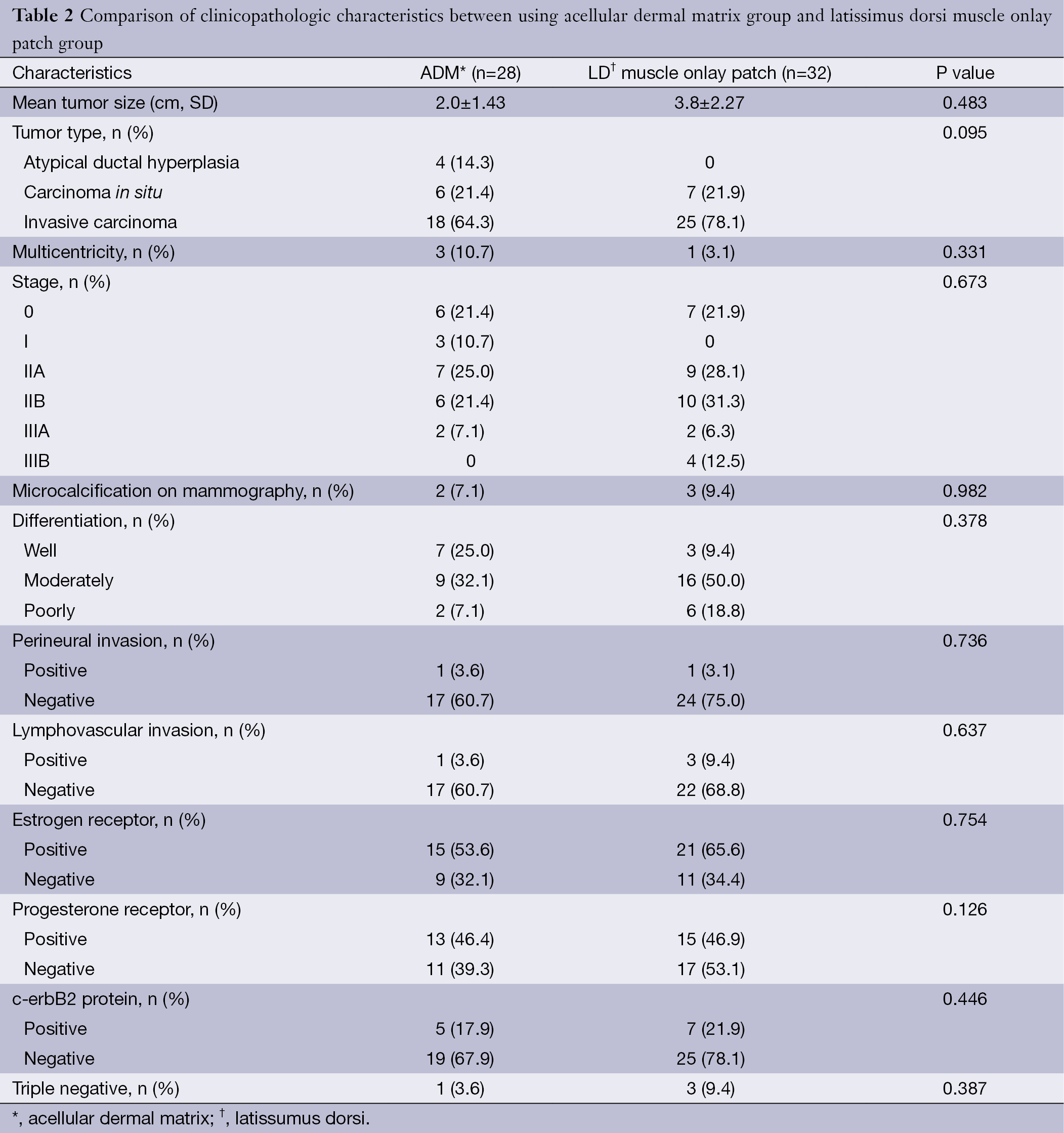 The postoperative complications occurred in four out of 28 in the ADM group and one out of 32 in the LD muscle onlay patch group. A severe infection of the ADM occurred in the ADM group. We removed both the cohesive gel implant and ADM immediately, because methicillin-resistant staphylococcus aureus (MRSA) was detected in tissue culture. Other complications were capsular contracture after radiotherapy, inflammation, and seroma of the implant cavity, which were confirmed by breast MRI. In the LD muscle onlay patch group, only one seroma of the implant cavity was detected by breast MRI (Table 3). The patient, who was diagnosed the second degree of capsular contracture in MRI, had no previous surgical history or radiotherapy. This contracture occurred on 4 months after surgery and 3 months after radiotherapy.

The scores of each item for cosmetic outcomes are shown in Table 4 and Figure 3. The LD muscle onlay patch group had a greater degree of satisfactory than the ADM group in terms of breast symmetry (P<0.001) and breast shape (P=0.008). However, in terms of overall satisfaction, breast softness and tension with movement were similar between groups. 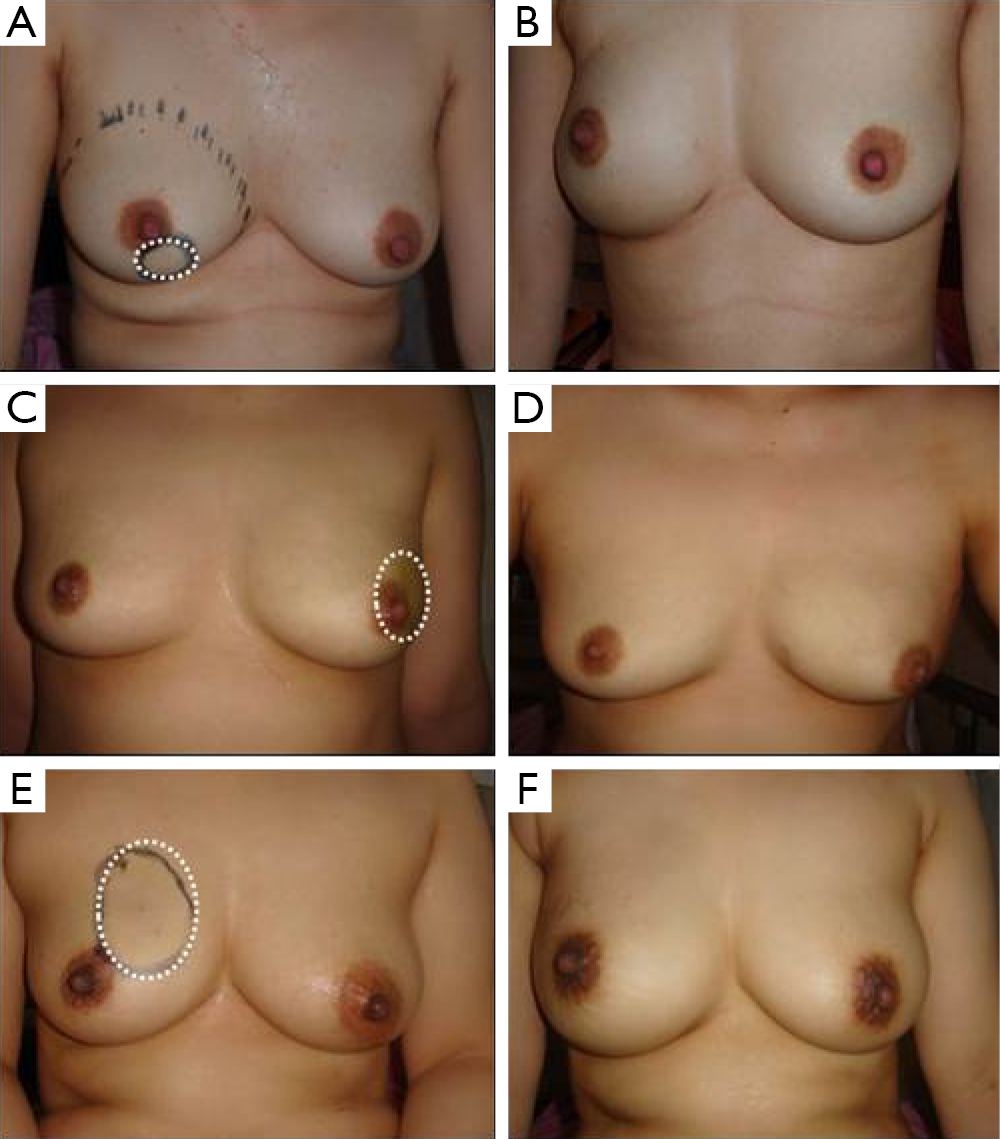 Oncoplastic breast surgery has been performed with autologous flaps or artificial implants. In cases of breast reconstruction after mastectomy or nipple sparing mastectomy, implant-based breast reconstruction is primarily performed. Because an excessive movement or displacement of the implant can occur when the implant is put into the breast cavity, the implant should be inserted under the muscle in a fixed position. However, the full muscle coverage for the implant does not only limit the space for the implant but is usually not possible to be achieved, because the pectoralis muscle anatomically does not reach so far down to cover the lower lateral part of the implant. Even with additional intraoperative lifting of the serratus muscle a full coverage in the lower lateral aspect of the breast is hardly to achieve. Thus, breast surgeons have used an ADM to cover and support the lateral and inferior aspects of the cavity, allowing expansion of the space and prevention for displacement of implant (1,7,10,14).

A single stage reconstruction is beneficial regarding postoperative capsule fibrosis then this could also be achieved with an implant only reconstruction straight underneath the skin too, or with a reconstruction with the use of LD muscle flap (3,11,16). Implant-based breast reconstruction with ADM allows a natural breast contour with the formation of a neo-inframammary fold. However, postoperative seroma or infection is the most frequent complication (10). When, a severe infection occurred, the ADM or prosthesis should be removed immediately. In our study, there was one case of methicillin-resistent staphyllococcus aureus infection of the ADM. We removed the ADM and prosthesis immediately and delayed breast reconstruction was planned after chemotherapy and radiotherapy. Although this complication arose before adjuvant treatment in our study, we might expect the higher incidence of infection in patients who received chemotherapy or radiotherapy.

When breast symmetry cannot be achieved with an autologous flap, such as using a transversus rectus abdominis myocutaneous flap, or is impossible because of old age or underlying disease, implant-based breast reconstruction can be planned. However, breast symmetry would not be acceptable only with large volume of implant in ptotic breasts, because the reconstructed breast would be firm and elastic compared to the contralateral breast (17). To obtain high-quality of breast symmetry and shape, breast reconstruction should be performed with an autologous flap and any insufficient breast volume can be filled with the implant. In implant-based breast reconstruction using an LD muscle flap, a triangular window can be covered with a LD muscle flap instead of an ADM. And it is able to reduce the incidence of postoperative infection, even in patients who received chemotherapy or radiotherapy. And because the LD muscle onlay patch is thicker than ADMs, it can also prevent radiotherapy-induced capsular contracture, which tends to occur when the implant is close to the skin (2,15).

The surgeons should strive to achieve satisfactory cosmetic outcomes with regard to breast volume, breast symmetry, and breast shape. Implant-based breast reconstruction using a concurrent autologous tissue flap would achieve some of these outcomes. In conclusion, the implant-based breast reconstruction using an LD muscle onlay patch is a feasible surgical technique achieving good cosmetic outcomes as well as fewer postoperative complications compared to the using ADM method.

This work was supported by a 2-Year Research Grant of Pusan National University. And the authors thank to Dongkyun Kang, illustrator, for his art work and advice.