Pancreaticoduodenectomy (PD) has been the gold standard surgical procedure for malignant hepatobiliary pancreatic and periampullary tumors. With advances in the development of surgical techniques, devices, and perioperative managements, surgical-related mortality rates following PD has decrease to less than 5% (1-3). However, some studies have still reported morbidity rates of 30–65% (4,5). Among the potential complications, the most common have generally been surgical site infections (SSIs), delayed gastric emptying and postoperative pancreatic fistula (POPF). In particular, SSIs, including intra-abdominal abscess and wound infection, are occasionally caused by POPF (6). SSIs have been known to increase medical costs and prolong hospitalization. Thus, to prevent such outcomes, prompt identification and prevention of SSIs are clinically imperative. More recently, the Geriatric Nutritional Risk Index (GNRI) has gained favor in assessing a patient’s nutritional status and predicting clinical outcomes among elderly patients, particularly those with chronic kidney disease and heart failure (7,8). More importantly, the GNRI is easily accessible and inexpensive, requiring only data on body weight, height, and serum albumin levels (9). On the other hand, body weight and albumin levels are associated with postoperative complications including SSI. That was why we hypothesized that GNRI could evaluate the risk of SSI for the patients previously. Due to the intimate relationship between preoperative nutritional status and SSI, previous study (Kawaguchi study) had proved that GNRI <94 could predict SSI among patients who underwent PD (10). Thus, the present Ageo study aimed to validate the association between the GNRI and SSI among the patents who underwent PD in our cohort (Ageo study). This is important considering that the identification of predictive markers for SSI may help identify high-risk patients. We herein present the following article in accordance with the STROBE reporting checklist (available at http://dx.doi.org/10.21037/gs-20-451).

From January 2015 to October 2019, 93 consecutive patients who underwent PD for malignant hepatobiliary pancreatic or duodenal tumors were enrolled. Patients who underwent robotic and laparoscopic PD were excluded. Our protocol had been reviewed and approved by the Ethics Committee of Ageo Central General Hospital in 2019 (approval number: AMG736), and in accordance with the Helsinki Declaration as revised in 2013. All participants, including retrospectively registered patients or their guardians, verbally consented to the use of their medical information for scientific research. Given that the previous study (Kawaguchi study) enrolled 106 patients who underwent PD at Kawaguchi Municipal Medical Center, a sample size of 86 to 126 patients was planned (Ageo study).

Definition of the SSIs and POPF

Patients were divided into two groups according to the presence or absence of SSIs. Clinical and demographic data from each group are summarized in Table 1. Although no statistically significant differences in gender, age, smoking habit, ASA classification, BMI, alcohol intake, preoperative biliary drainage, estimated blood loss, operative time, blood transfusions, and postoperative length of hospitalization were observed between the SSI and non-SSI groups, statistically significant differences were observed for preoperative albumin (P<0.001), GNRI values (P<0.001), pancreatic fistula (P<0.001) and postoperative hospital stays (P<0.001). POPF developed in 30 patients (32.3%), 20 of whom (66.7%) developed SSIs. The latest International Study Group of Pancreatic Surgery criteria reported in 2016 (11) defined POPF as grades B and C complications. Moreover, majority of the SSIs were developed at the organ/space (N=28). 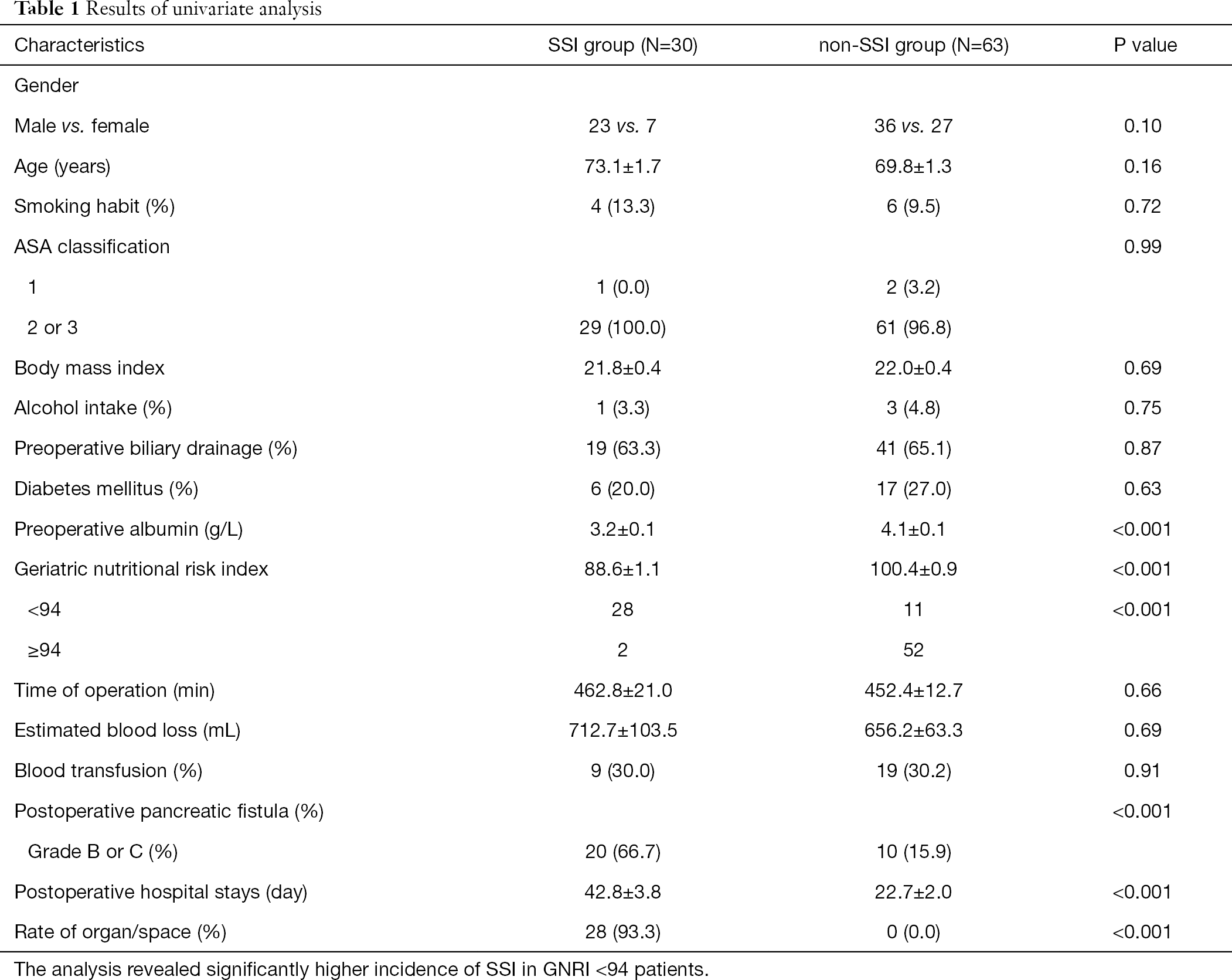 The optimal cutoff value was determined using ROC curve analysis (Figure 1). With an area under the curve of 0.93 (95% confidence interval: 0.88–0.98), the most appropriate cutoff value determined to be 94, which was the same as that in our previous work. This value had a sensitivity of 83.3% and a specificity of 83.6%. Patients were then divided into two groups according to the established cutoff value: group A (GNRI ≥94, N=52) and group B (GNRI <94, N=41). Accordingly, the observed SSI rate in groups A and B was 3.8% and 68.3%, respectively. 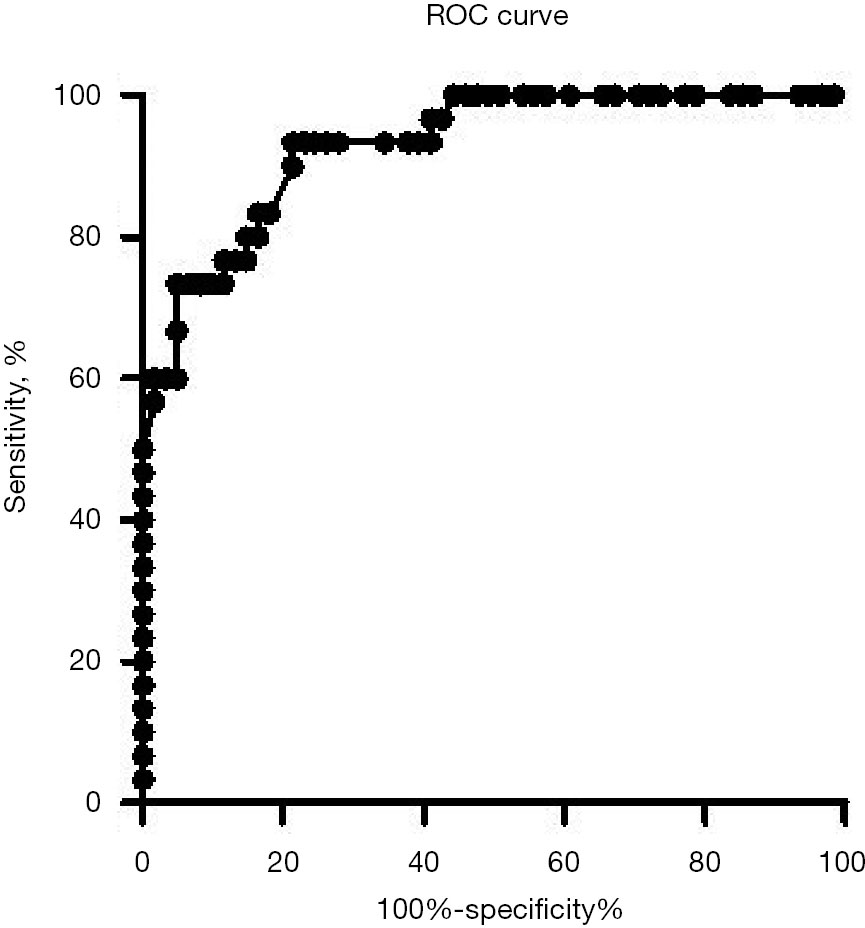 Figure 1 ROC curve analysis. GNRI was chosen by 94 as an optimal cutoff value with sensitivity 83.3% and specificity 83.6%.

Univariate analysis revealed that a GNRI value <94 was able to predict SSIs risk following PD. Group B had a significantly higher incidence of SSI than group A (P<0.001).

Logistic regression analysis showed that a GNRI value <94 was an independent risk factor for SSIs as outlined in Table 2.

PD is a technically complex and invasive procedure. As such, preventing postoperative complications, including POPF, delayed gastric empty, intra-abdominal bleeding, and SSIs, remain a major priority for surgeons. In particular, SSIs, which are among the most common complications following PD, can lead to decreased survival and delayed adjuvant chemotherapy (6,11). In addition, SSIs prolong hospitalization and increase medical costs by an estimated $1,400 per patient after PD (12). Additionally, POPF can promote SSIs apart from merely occurring independently. Accordingly, studies have reported that 45–55% of patients with POPFs developed intra-abdominal abscesses (13,14). Recent reports have also revealed an association between nutritional status and POPF among patients who had undergone pancreatic resection (15,16).

Identified risk factors for SSIs following PD generally include preoperative bile drainage, BMI, age, neoadjuvant chemotherapy, operative time, estimated blood loss, pancreatic duct diameter, and nutritional status (17-19). Despite the absence of definitive risk factors for SSIs, but nutritional status must reach a certain level of consensus among risk factors for developing SSIs in abdominal surgery (20). Another study showed that lower albumin level was an independent predictor of SSIs among patients with gastrointestinal cancer (20). Moreover, other studies have shown that sarcopenia was an objective and independent preoperative predictor of infectious complications after PD (21), while preoperative sarcopenia affected liver surgery outcomes (22) even during liver transplantation (23).

The present Ageo study aimed to validate whether the GNRI can predict the incidence of SSI following PD in our patient cohort. Accordingly, results for the validation cohort revealed that a low GNRI value (<94), which was the same as that in previous Kawaguchi study (10), was strongly associated with higher SSI risk, supporting the feasibility of nutritional assessment before surgery. Recent evidence by Sasaki et al. also showed that the GNRI could be a useful predictor of SSI after surgery, further supporting our data (30). Thus, we believe that our hypothesis has exhibited relative consistency. The present Ageo study has several limitations worth noting. First, though our hypothesis had been confirmed in two independent cohorts, the relatively small sample size may limit the statistical power of our study. Second, given the retrospective design of this study, a more comprehensive prospective study should be conducted to confirm our findings in the near future.

The present study provided assurance of Kawaguchi study that a lower GNRI, which can be easily calculated using serum albumin level, height, and body weight, can be a potential predictor of SSIs among patients who had undergone PD in clinical practice.

Reporting Checklist: The authors have completed the STROBE reporting checklist. Available at http://dx.doi.org/10.21037/gs-20-451

Conflicts of Interest: All authors have completed the ICMJE uniform disclosure form (available at http://dx.doi.org/10.21037/gs-20-451). The authors have no conflicts of interest to declare.

Ethical Statement: The authors are accountable for all aspects of the work in ensuring that questions related to the accuracy or integrity of any part of the work are appropriately investigated and resolved. The present study was approved by the Ethics Committee of Ageo Central General Hospital in 2019 (approval number: AMG736) and informed verbal consent obtained from each patient. In addition, approval of the present study was performed according to the Declaration of Helsinki as revised in 2013.