Ever since the onset of endoscopic surgery, various techniques of endoscopic thyroid surgery have been introduced worldwide. Along with these developments, several studies assessed the safety and feasibility of these new methods. In some papers, they have demonstrated the validity and safety of bilateral axillo-breast approach (BABA)-thyroidectomy procedure compared to open surgery (3).

Until today, many surgeons performed thyroidectomy surgery using BABA procedure. The surgical method developed and moved to the natural orifice transluminal endoscopic surgery method. This technique of natural orifice transluminal endoscopic surgery applied to thyroidectomy through an intraoral approach has been performed in a porcine model and human cadavers (4-6).

There are two methods of transoral natural orifice transluminal endoscopic thyroidectomy. One approach is through the sublingual thyroid access and the other is through the oral vestibular. The trans-sublingual method is not well used because of the relatively large number of complications, and currently the trans-vestibular approach is widely used (7,8).

The transoral approach has been recently adopted for minimally invasive thyroid surgery and since then, it has become popular (9). Transoral robotic thyroidectomy (TORT) uses three ports on the lower lip and one additional axillary port in the right axilla (10).

The use of robotic systems for thyroidectomy has increased as it enables more diverse approaches than the conventional open method. After all, the robotic system provides better surgical field and allows multi-articulated movement (11). We have reported the feasibility of TORT in our previous study (12), but our study did not compare the clinical outcomes of TORT with BABA-robotic thyroidectomy (RT). The aim of this study was to compare the clinical outcomes of TORT and BABA-RT (Video 1). We present the following article/case in accordance with the STROBE reporting checklist (available at http://dx.doi.org/10.21037/gs-20-468).

The study protocol was approved by the Institutional Review Board of Korea University Hospital (approval number: 2017AN0077) and was performed in accordance with the ethical standards of the Declaration of Helsinki (as revised in 2013). All patients gave their informed consent prior to their inclusion in the study. BABA-RT surgery was performed between 2008 and 2016 and TORT is in place since 2012. This study included patients who underwent surgery by BABA-RT or TORT approach in our facility between 2008 and 2018. All surgeries were performed by one surgeon (H.Y. Kim). According to American Thyroid Association (ATA) guidelines 2015, total thyroidectomy with central node dissection (CND) was performed only if tumors were >4 cm and had extrathyroidal extension, clinically apparent lymph node or distant metastases. In all other cases, lobectomy ± CND was performed.

All patients underwent prophylactic antibiotics before surgery and preoperatively vocal cord status was assessed by indirect laryngoscopy. In BABA-RT cases, additional breast mammography and ultrasound were used to confirm breast tissue has some problem before surgery. In TORT cases, all patients underwent treatment and scaling at the dentist prior to surgery, and gentle cleaning with chlorhexidine gluconate solution was maintained for 1 week prior to surgery.

The TORT procedure has been described in detail previously (12). TORT was performed using a camera port with one 12 mm trocar, and two 5 mm trocar on the lower lip. An additional 8-mm port was used as a working port via the right axilla. This axillary port was used for specimen removal and to insert drain post-surgery. Epinephrine dilution (1:200,000) was injected in the jaw and lower neck and flapped through the midline incision. The upper and lower margins of the flap were the thyroid cartilage and sternal notch, with the lateral margins being the medial border of the sternocleidomastoid muscle of either side.

Postoperative pain was scored using a visual analog scale (VAS) ranging from 0 (no pain) to 10 (worst pain). A routine indirect laryngoscopic examination was performed immediately after surgery. In this study, recurrent laryngeal nerve (RLN) palsy was defined as transient when vocal cord movements recovered within 6 months. Hypoparathyroidism was defined when the parathyroid hormone (PTH) level (normal range: PTH >8 pg/mL) and calcium level were below the normal range with an ongoing requirement for oral calcium supplement. Hypoparathyroidism was defined as permanent when it lasted beyond 6 months after surgery.

Results were analyzed with SPSS version 22 (SPSS, Inc. Chicago, IL, USA). Continuous variables and categorical variables were expressed, respectively, as mean and standard deviation, and frequency. Comparisons within groups were performed using Mann-Whitney, Fisher’s exact or Chi-square test according to the sample size. A statistical difference was considered significant when P value was less than 0.05.

The pathologic results are shown in Table 2. Pathologic outcomes differ from malignant to benign tumors in both groups [malignant 90.3%, benign 9.7% (TORT) vs. malignant 97.8%, benign 2.2% (BABA-RT); P<0.01]. It is thought that the ratio of benign tumors in the TORT group is higher due to the fact that most thyroid surgeries are done by a robot at our hospital. The number of retrieved lymph node (LN) was higher in the TORT group (4.9±4.4 vs. 4.2±4.9; P=0.01). There were no significant differences between the TROT and BABA-RT groups in concerns to the location of the tumor. 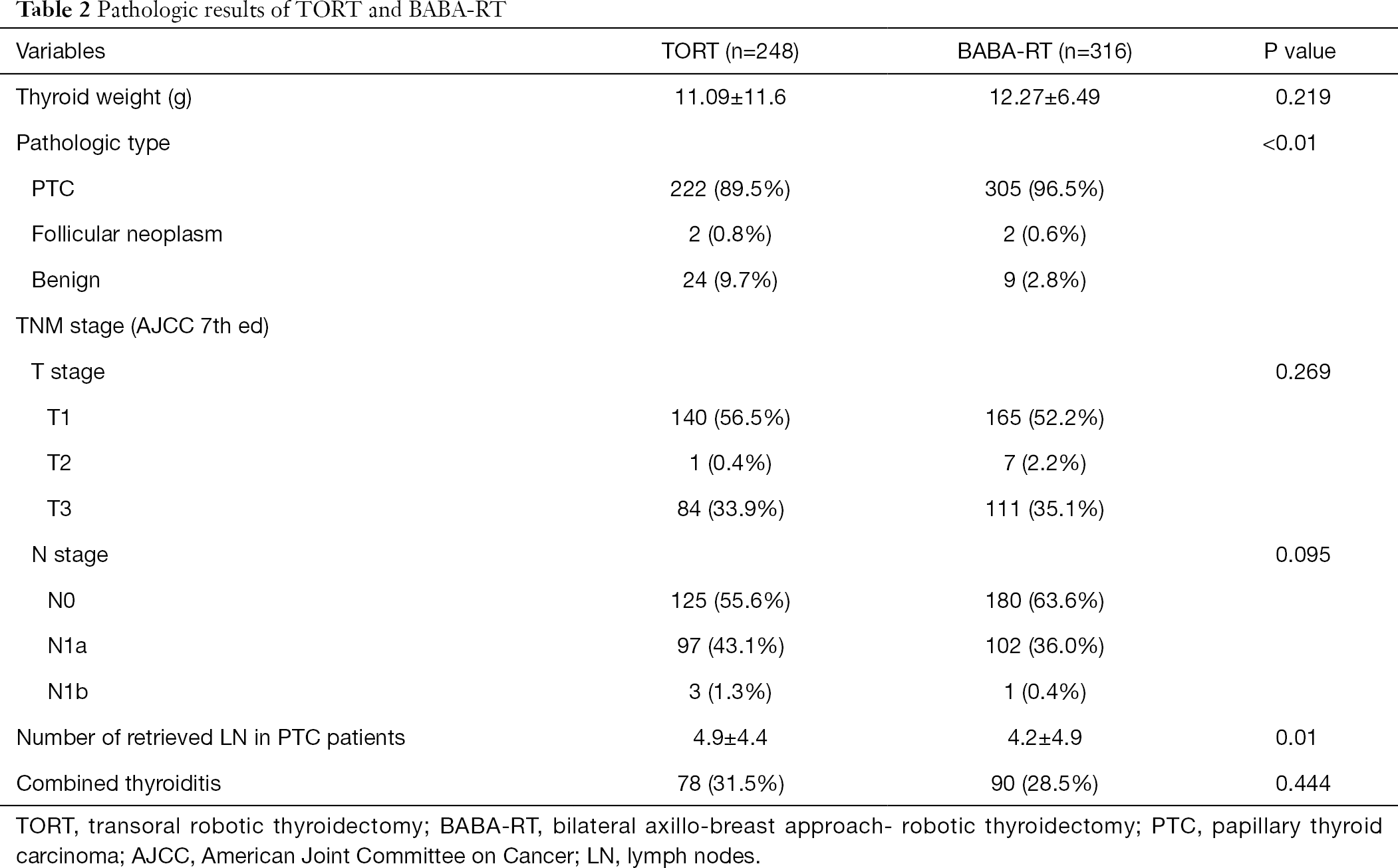 Among 248 TORT patients, there was one case of bleeding and one patient with chyle leakage for postoperative complications. Both of the patients underwent reoperation and were discharged from the hospital without further events. There were 3 postoperative temporary vocal cord palsy, and all 3 patients recovered within 3 months from the temporary symptoms. In 315 patients with BABA-RT, there were 7 cases of postoperative seroma. There were also 8 cases of vocal cord palsy in the BABA-RT group (3.3%), which was more than that of the TORT group (1.2%). For postoperative transient hypoparathyroidism, the TORT group had occurrence rate of 7.1% while the BABA-RT group had 16% occurrence rate. Furthermore, there was one permanent hypoparathyroidism case which did not show recovery in the BABA-RT group. On the other hand, there were few TORT-specific complications to consider. There were 2 cases of zygomatic bruising, 1 case of chin flap perforation, 2 cases of oral commissure tearing, and 2 cases of dimpling on the chin in the TORT group (Table 4). It is important to note that these complications mostly occurred during the initial learning curve period of TORT. Hence, for surgeons newly starting TORT, they should pay extra caution with close monitoring to prevent these TORT-specific complications until the experience accumulates. 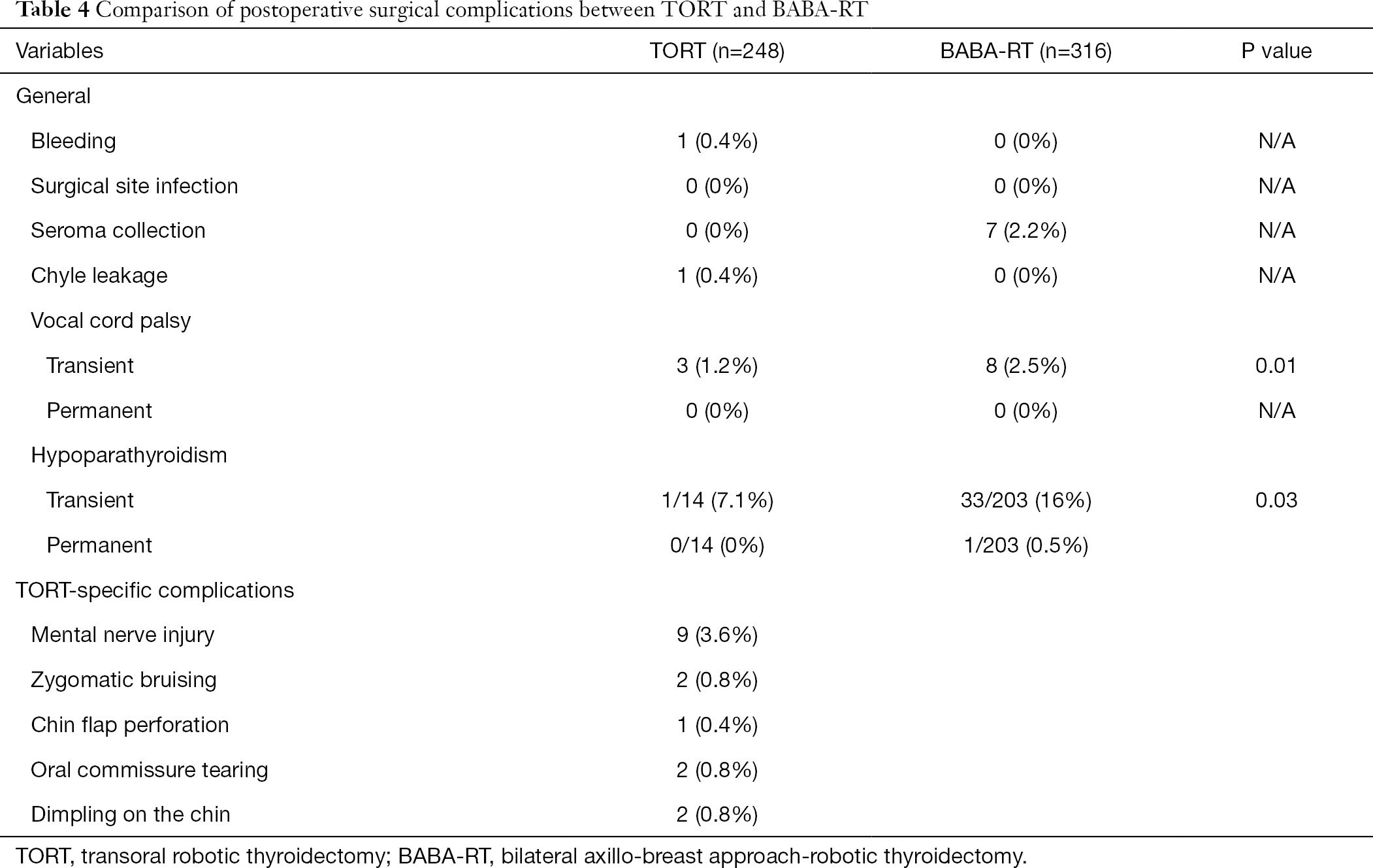 This study showed that the total surgical outcome of TORT was equivalent to that of BABA-RT. The TORT group had many advantages such as, better outcome for retrieved LNs in patients with papillary thyroid carcinoma, decreased postoperative pain, hospital stay, operation time, and postoperative complications of seroma.

Transoral thyroidectomy procedure is less invasive and relatively safe than other surgical procedures (13-15). It does not require a flap on any part of the body other than the anterior neck, resulting in a smaller flap dissection area than BABA-RT, and a lower complication rate. In addition, TORT results in no other scars than a small incision in the axillary area, so patient satisfaction after surgery is high. TORT has been tried with cosmetic advantages (16), and postoperatively it brings many advantages such as voice outcome, postoperative time and pain reduction. It seems to be a more ideal procedure in a high-tech era. Many surgeons have attempted trans-oral surgery on animals, cadavers, and humans (4,7,17,18). However, this procedure requires a lot of practice because it can cause complications of mental nerve injury, numbness of the chin and lower lip.

We have previously published a comparison of 50 cases of TORT and BABA-RT (19). The same results were obtained with regard to the reduction in operation time, hospital stay, and pain score. Unlike previous papers, as the number of cases increases, the results of postoperative complication can be compared in both groups. When comparing TORT and BABA-RT approaches, TORT had a significantly lower postoperative transient vocal cord palsy and transient hypoparathyroidism, but also increased complications of initial learning period. There was a statistically significant difference in the total number of thyroidectomies between both groups. This was due to a change in the guidelines for thyroid surgery, reducing the total number of thyroidectomies. Another difference was the number of retrieved LNs. There was a relatively high difference in TORT, since this procedure is performed in a head-to-foot operative position meaning that the operation is more delicate due to a more comfortable posture and view.

The strength of this study is the relative small selection bias since there is a large number of patients treated by a single surgeon and, BABA-RT and TORT are collecting and comparing data continuously. On the other hand, the limitation is the use of a single surgeon. Consequently, experience increased along with the number of cases, which could cause bias. Second, the follow-up period of TORT was short, and the oncologic outcome was not observed for a long time. Third, compared to all patients undergoing TORT and BABA surgery, the ratio between lobectomy and total thyroidectomy is different. We want to argue through this paper is that TORT is not bad compared to the previous BABA surgery method. Finally, statistically, there were significant values in days of hospital stays and the number of retrieved LNs, but the significant values were insignificant, it can think that there is no significant difference between the two groups in clinically. This paper is divided into different periods according to the change of operation method according to the times. It is not a randomized study, but it is free from selection bias because the data were collected consecutively and we used whole data without omission.

In conclusion, when comparing a total of 248 patients treated with TORT versus 316 with BABA-RT, TORT not only has advantages in better cosmetic outcomes with minimized postoperative scars, but also shows comparable, or even superior, surgical outcomes with shorter operation time than the BABA-RT procedure.

Funding: This work was supported by a Korea University grant (K1813031).

Reporting Checklist: The authors have completed the STROBE reporting checklist. Available at http://dx.doi.org/10.21037/gs-20-468

Conflicts of Interest: All authors have completed the ICMJE uniform disclosure form (available at http://dx.doi.org/10.21037/gs-20-468). RPT serves as an unpaid editorial board member of Gland Surgery from September 2020 to August 2022. Dr. Kim reports grants from Korea university grant (K1813031), during the conduct of the study and is a consultant for Medtronic. The other authors have no conflicts of interest to declare.

Ethical Statement: The authors are accountable for all aspects of the work in ensuring that questions related to the accuracy or integrity of any part of the work are appropriately investigated and resolved. The study protocol was approved by the Institutional Review Board of Korea University Hospital (approval number: 2017AN0077) and was performed in accordance with the ethical standards of the Declaration of Helsinki (as revised in 2013). All patients gave their informed consent prior to their inclusion in the study.